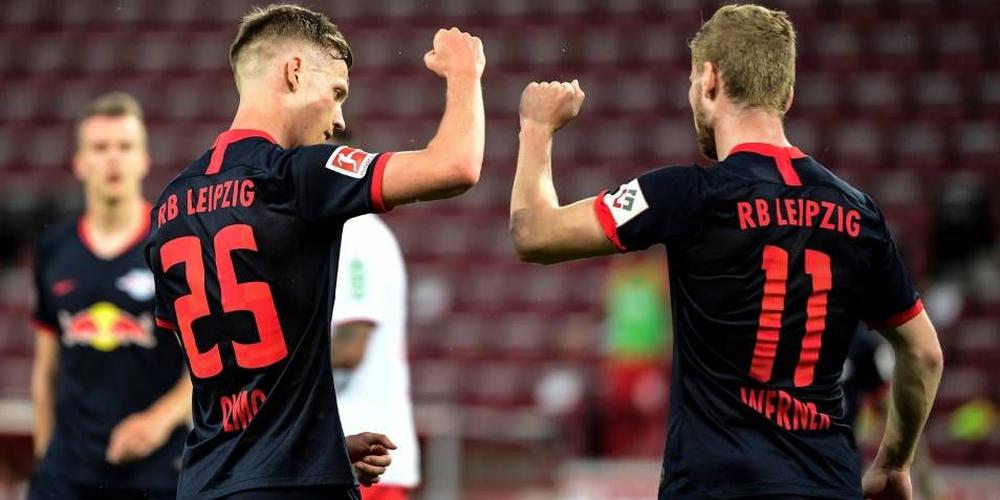 After dropping points against Hertha last Wednesday, Julian Nagelsmann’s side returned to winning ways against Koln while again proving why they’re such a deadly attacking force. Goals from Patrik Schick, Christopher Nkunku, Timo Werner and Dani Olmo’s first Bundesliga strike were enough in a frenetic affair.

The scoreline read 4-2 in RB Leipzig’s favour but in truth, they could have easily scored double that figure over a telling 90 minutes on this occasion.

Down after just seven minutes courtesy of Jhon Cordoba’s 12th league goal this term, you could already imagine the wince on Nagelsmann’s face as his side made a mess defensively and failed to clear their lines.

Dayot Upamecano, the club’s star defender, was caught flat-footed as Benno Schmitz teed up the run of Elvis Rexhbecaj to his left. He hit the post from close-range, though the ball bounced back up and sat nicely for Cordoba who fired beyond Peter Gulacsi.

Having got fingertips to the initial effort, the 30-year-old goalkeeper really should have done better to save the follow-up strike.

Nonetheless, he and his teammates eventually redeemed themselves – though this served as a welcome warning that 11th-placed Koln were not just here to make up the numbers.

Cordoba had another half-chance shortly afterwards, this time a header which Gulacsi claimed after the hosts’ pressure saw them earn another promising opportunity.

Hosts ahead but not for long

But less than 15 minutes after taking the lead, Koln were pegged back. Upamecano bursted into midfield with the ball at his feet, fed Angelino to his left and watched as the Spaniard, on-loan from Manchester City, fired a great cross into the box.

Patrik Schick rose highest to head home with aplomb, while Timo Horn – who was certainly kept busy throughout – could do nothing to stop that guided finish.

Koln goalscorer Cordoba, who earlier required injury treatment after a tussle for possession with Upamecano, hobbled off and was unable to continue. On came the experienced figure of Anthony Modeste to replace him, midway through the first-half.

Plenty of nagging fouls were breaking up play as Leipzig, powered by Upamecano’s assertive distribution from deep, patiently probed and waited for chances to blossom.

They earned one from seemingly nothing before half-time: Horn’s goal-kick was cut out by Nordi Mukiele’s aerial challenge. Konrad Laimer’s pass set Nkunku through on goal after defender Toni Leistner’s missed sliding interception. 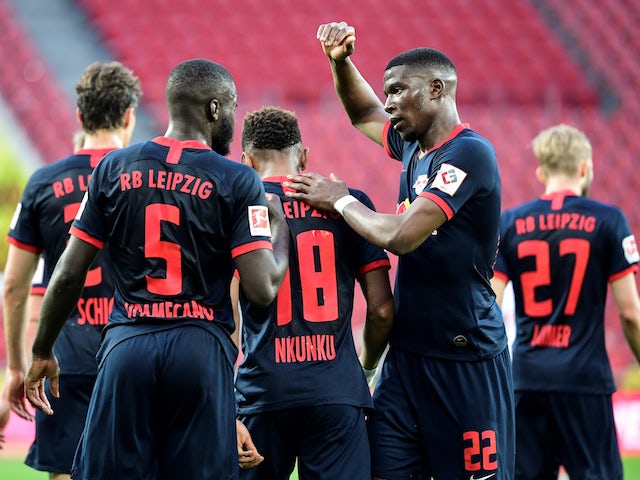 He gleefully latched onto the pass, showing spatial awareness and confidence to deftly chip over over an onrushing Horn to score his fifth Bundesliga goal of the season.

They might have had another one on the stroke of half-time, after Upamecano, Angelino, Laimer, Marcel Sabitzer and Werner combined during a wonderful move which narrowly flashed across the face of goal.

Koln’s threat on the counter remained a concern though, as substitute Modeste outmuscled Lukas Klostermann in pursuit of Horn’s long searching kick forward and shaped to shoot inside the box, but was denied by a timely Upamecano block.

Five minutes after the restart, Leipzig earned a two-goal cushion.

Quick thinking and perfect execution by Gulacsi saw Koln sucker-punched from their own set-piece, as his long kick upfield presented Werner a great opportunity – he made no mistake, slotting into the bottom corner. 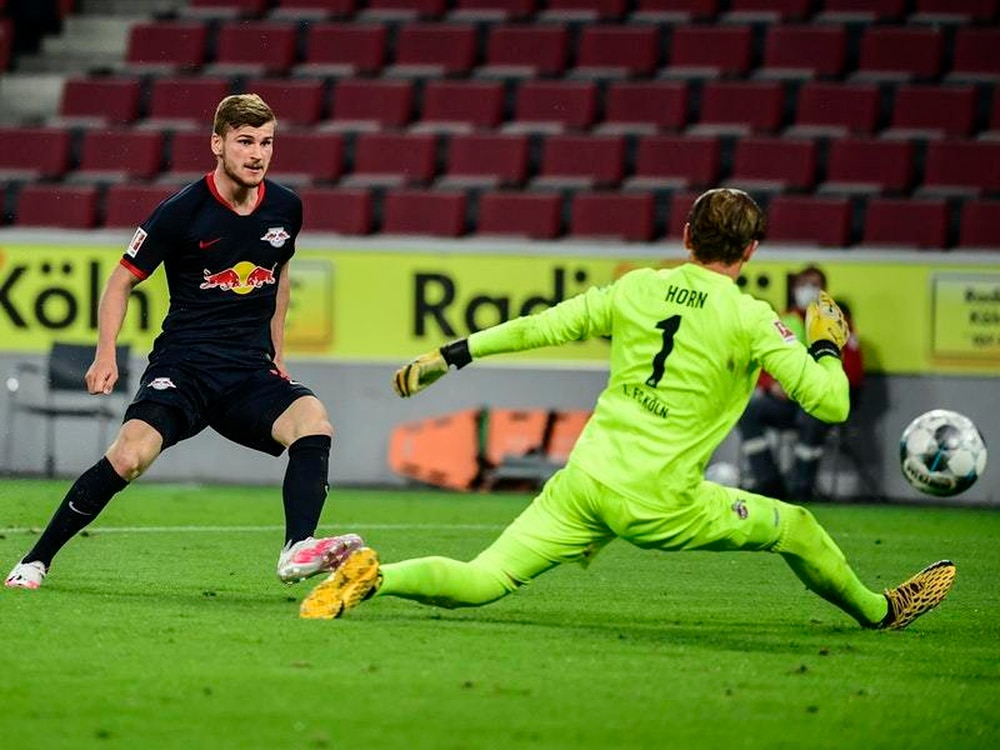 Werner made no mistake from close-range, slotting home his 25th league goal of the campaign

Modeste makes his mark as goals fly in

Four minutes later though, Koln responded with a sweet strike of their own.

Ellyes Skhiri forced Gulacsi into a save after a shaky defensive moment by Klostermann, but the danger was only partially averted.

Modeste swept the ball past Sabitzer and curled his strike into the bottom corner, leaving Gulacsi no chance as he was unsighted by the towering figure of Upamecano.

Just like Paderborn-Dortmund on Sunday, the game’s quick-fire goals were not done there. The hosts had fought their way back into proceedings with a moment of brilliance, but were again undone by a moment of magic at the other end.

Horn very busy as RB step it up a gear

Olmo, rather quiet in the first-half, burst into life after Nkunku’s corner was headed towards his path on the edge of the area. He took one touch to set himself before drilling it into the bottom corner with aplomb.

Ten minutes later, Horn was forced into another good save to stop Werner adding to his tally at the end of a slaloming run forward into the box.

Schick, replaced shortly afterward, headed the follow-up wide. With ten minutes left and all of Koln’s five allotted substitutions on the pitch, Leipzig were gunning for more.

Olmo produced a brilliant probing pass for Werner, who couldn’t replicate his earlier composure and fired over the bar. A few minutes prior, Olmo dovetailed with Nkunku as they intricately passed their way through the Koln midfield onto the edge of the area.

His resulting shot though, flashed narrowly wide and hit the side netting. The Spain under-21 international had suddenly come to life, before also being replaced as fellow creative midfielder Emil Forsberg was given a late run out.

Despite suspicions of a potential offside, Modeste squandered a late chance to pull another one back from close-range – dragging his shot wide.

Forsberg could have earned a stoppage-time assist for his troubles, but for Horn’s reflexes to claw away Sabitzer’s audacious chip.

Leipzig’s 4-2 win at the RheinEnergie Stadion propels them back into third place, two points off second-placed Borussia Dortmund. More importantly, they are among the Champions League places again with five league matches still to play.

They still need to pick up a few more points to ensure they’re mathematically safe and fixtures vs. Augsburg, Frankfurt and Bremen present an opportunity to do precisely that.