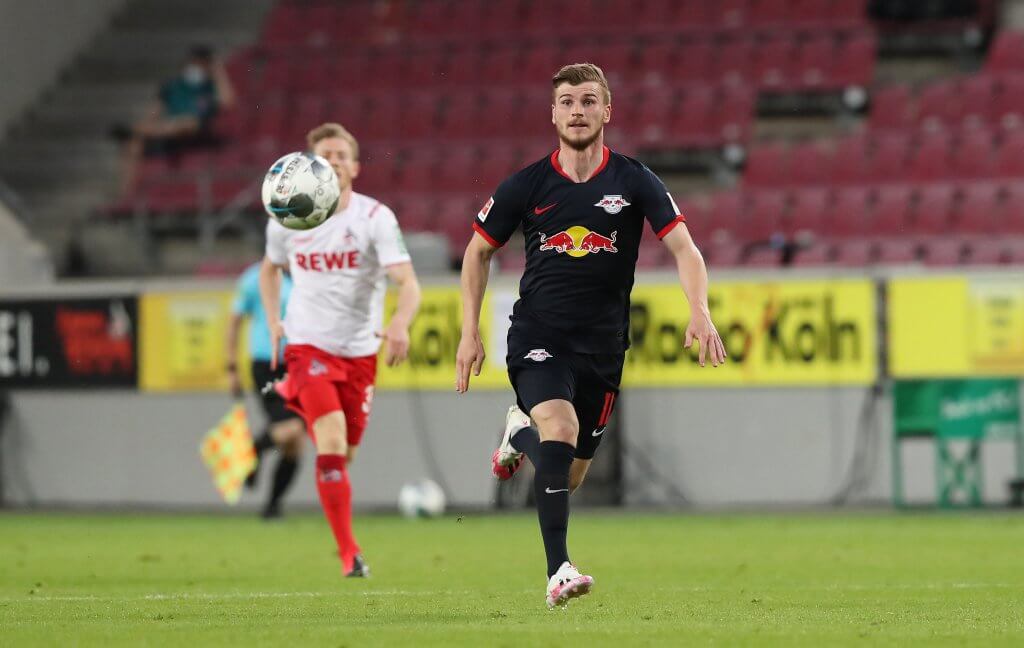 In news which will put their Premier League rivals on alert, Chelsea are prepared to activate RB Leipzig striker Timo Werner’s £49m release clause as reports suggest the Blues are close to signing him this summer – under Liverpool’s noses.

As reported by the Telegraph and ESPN today, Chelsea have taken a significant step towards completing another big summer signing in highly-rated forward Timo Werner.

Rival clubs have until June 15 to buy him outright for a fixed price, with the Blues receiving ample encouragement that Werner would be willing to move to London.

He would join Ajax midfielder Hakim Ziyech at Stamford Bridge ahead of the 2020-21 campaign, after the Moroccan agreed terms on a £33.3m move in February.

The deal may also complicate contract extension talks with the club’s top goalscorer, Tammy Abraham. The 22-year-old forward has two years left on his existing deal.

Werner, 24, has not been shy about his eagerness to play in England’s top-flight, citing Liverpool and Manchester United as two clubs he was particularly fond of, in 2018.

Since that interview, the Germany international’s stock has risen considerably – even after a forgettable World Cup campaign that summer, where he and his national teammates failed to progress past the group stages – for the first time in their history.

Having joined Leipzig in a £12m move from VfB Stuttgart in the summer of 2016, Werner has scored 92 goals and created 39 assists in 154 appearances across all competitions.

This season alone, he’s surpassed his best goalscoring tally: 31 goals and 12 assists in 40 appearances, including a personal-high 25 strikes in this season’s Bundesliga.

German news outlet BILD suggest he will earn in excess of €10m-per-season as well as performance-related bonuses, in part of an initial five-year deal in west London.

Last summer, Werner signed a contract extension until 2023 – preventing Leipzig from gaining nothing, as he would have been available on a free transfer this year.

His departure has been heavily discussed across Europe, so Julian Nagelsmann will be trusted to reinvest the finances wisely. Striker Patrik Schick (on-loan from AS Roma) for example, has already stressed his eagerness to remain in Germany beyond this term.

Reports suggest Werder Bremen forward Milot Rashica could be available for as little as €15m this summer, should Bremen fail to overcome a tricky relegation battle.

What about Liverpool and their heavy interest in him?

Premier League leaders Liverpool have long been admirers of Werner, with compatriot Jurgen Klopp at the helm suggesting the pair would link up at some stage in future.

They held a virtual meeting over the phone last month, with speculation spinning into overdrive about his impending Premier League arrival.

Werner is aware of the Reds‘ existing attacking options. Sadio Mane, Mohamed Salah and Roberto Firmino would be difficult to displace, not least as a bonafide centtre-forward.

Nonetheless, Liverpool were still expected to bolster their ranks by adding further quality competition in Werner, as part of a side that won the Champions League twelve months ago and are just six points away from their first top-flight title since 1990.

Now though, that doesn’t seem the case. Finances are said to be a stumbling block that Liverpool cannot overcome – something that hasn’t gone down well with fans, considering their recent success and questions are being asked of their ownership.

Wrote this 2 weeks ago on the financial impact of COVID-19 on #LFC.
Timo Werner had made no secret of his desire to move to Anfield. But the PL leaders weren't prepared to meet his release clause. https://t.co/yhvVDoUzaA