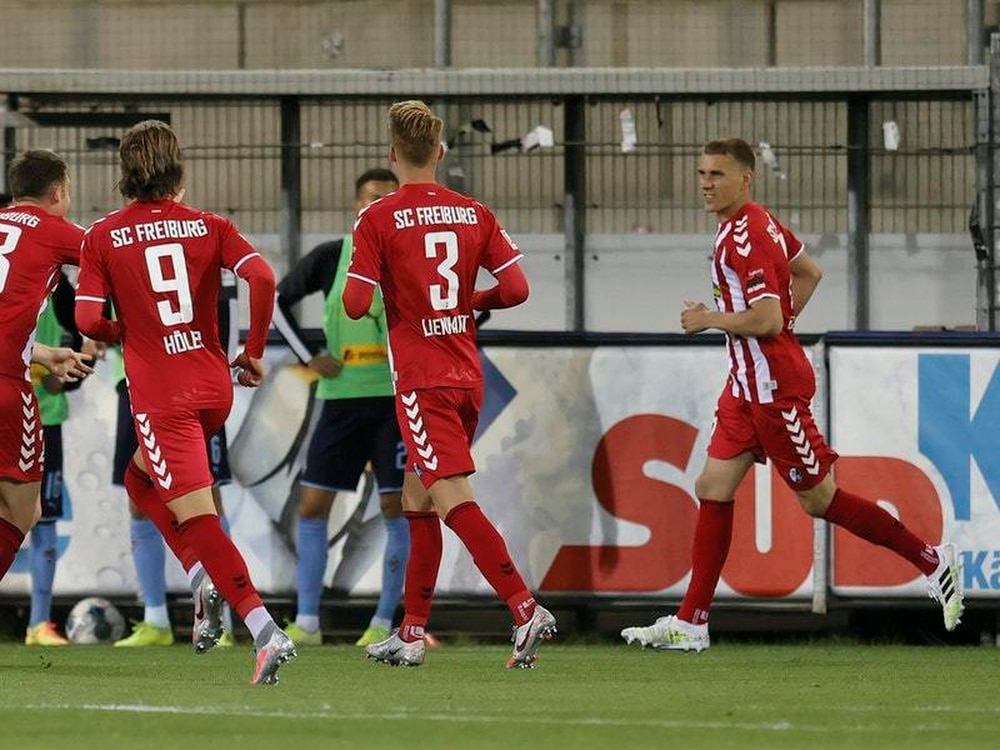 Nils Petersen came off the bench to score his second goal in three games as Freiburg battled hard to earn a 1-0 win over Champions League-chasing Borussia Monchengladbach, with a result that has significant ramifications for both sides.

The expression and subsequent celebrations in the dugout from Christian Streich spoke volumes, having watched his side soak up pressure galore before making Gladbach pay for their bright first-half display with a defensively resolute, tactically astute second-half.

In contrast, Gladbach forward Marcus Thuram couldn’t bare to look. He had his shirt above his face and had to be consoled by teammates at the full-time whistle, knowing full well that their Champions League destiny for next season is no longer in their hands.

Granted, they still have four games to play but would have leapfrogged RB Leipzig into third on 59 points with a win here, applying further pressure on their top-four rivals.

Instead, a nervous watch awaits them this weekend as Bayer Leverkusen, behind them on goal difference alone, host leaders Bayern.

They then face a trip to Munich themselves on June 13 – aware that anything less than a positive result could see clear daylight between themselves and Leverkusen for the division’s final Champions League qualification place.

That’s probably why Thuram, who has ten goals and eight assists in the Bundesliga this term, was visibly frustrated. His attack partner Alassane Plea, normally so disciplined, was sent off midway through the second-half and could only have himself to blame.

After being booked in the first-half – his first of the campaign – for a moment of petulance, kicking the ball away in frustration as referee Markus Schmidt awarded a Freiburg free-kick, he should have been on high alert not to make any silly challenges.

The hosts had taken the lead ten minutes prior, through substitute Nils Petersen. The 31-year-old hadn’t even been on the pitch more than 60 seconds, before heading Vincenzo Grifo’s excellent free-kick delivery beyond Yann Sommer into the bottom corner.

Gladbach were caught sleeping, with both captain Lars Stindl and fullback Ramy Bensebaini ball-watching as the ball was floated into the area. Petersen made no mistake.

So when Bensebaini’s loose pass was cut out by an alert Robin Koch, Plea instinctively stuck out a leg and caught the midfielder as he looked to advance in transition.

He looked in disbelief as the referee went to his pocket and sure, you could argue it was a soft booking in hindsight but when you make a challenge like that while booked, you present the officials with a very difficult decision to make.

Schmidt didn’t have a problem brandishing cards: eight in total over the 90 minutes, with 28 fouls (14 apiece) between the two sides during a match that had its moments.

Plea and Florian Neuhaus had promising first-half chances, while Bensebaini scored just before the half-hour mark, though it was correctly ruled offside.

Sommer had to make two important second-half interventions to keep his side in with a chance of salvaging a result, first from Koch and then an improvised save with his feet to thwart Lucas Holer from close-range in the final few minutes.

Ultimately though, it proved futile for a Gladbach side who failed to take their chances and paid the ultimate price against a determined Freiburg display – to record their first win since March 7.