Promotion-chasing Stuttgart will be keen to earn their third successive win, strengthening their case to return to the Bundesliga next season. Read on for match previews from three 2. Bundesliga fixtures on Sunday, as teams across contrasting positions continue jostling for much-needed points.

Hannover vs Heidenheim: Plenty at stake for both

Hannover face a tricky home test this weekend, as they entertain promotion-chasing Heidenheim in one of three 2. Bundesliga games on Sunday lunchtime.

Hannover come into this game after a 3-0 win over Dynamo Dresden in midweek, having had their four-game unbeaten streak ended unceremoniously by Sandhausen last week.

A win here would see them leapfrog Bochum back into sixth place on 42 points, while severely impacting Heidenheim’s chances of achieving a promotion berth this term.

Sunday’s visitors are unbeaten in three but still need to face two of the division’s top three sides – Hamburg then Bielefeld – to complete the delayed 2019-20 season later this month.

With that in mind, they cannot afford to drop any points if they want to apply pressure on their promotion rivals. Hamburg sit third in the promotion play-off position, just a point ahead of Frank Schmidt’s men, while Stuttgart hold a two-point gap in second.

Despite Marc Schnatterer’s missed first-half penalty, Heidenheim were also 3-0 winners in their last outing against mid-table Aue on May 31. The three days’ added rest could prove a marginal gain for them too, against a Hannover side determined to finish the season strongly – though are mathematically out of promotion contention.

Given what’s at stake for Sunday’s visitors, it’s difficult to see anything other than a Heidenheim victory here.

Only league leaders Bielefeld (26) boast a better defensive record than their 29 goals conceded this term and while they have struggled for regular goals, should have enough quality to edge out what would prove an important win.

Hannover have won two of their three H2H meetings, though suffered a humbling 4-0 defeat in their earlier encounter this term on November 10. Will history repeat itself, or can Kenan Kocak’s side spring a surprise to dent Heidenheim’s promotion hopes?

Aue vs Karlsruher: Points up for grabs with both sides struggling 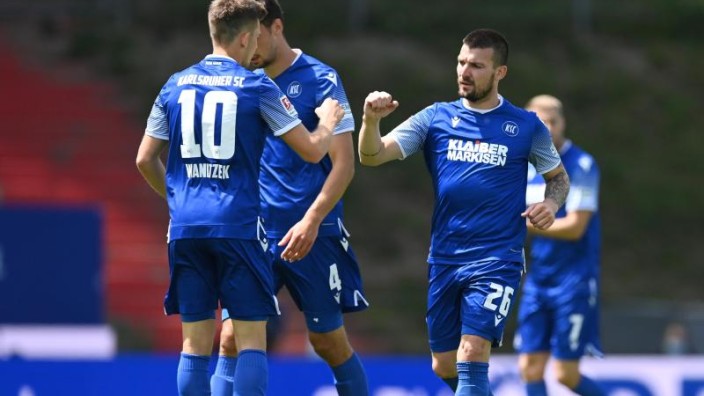 Karlsruher are eyeing their first win in four, after a 1-1 draw against St. Pauli last time out

Aue host Karlsruher in an important fixture for both struggling sides this weekend, as the 2. Bundesliga season continues to hot up, just three weeks left to play.

Aue come into this fixture with just one win since the enforced break, a 3-1 win over Sandhausen on May 16.

Since then, they’ve conceded seven in three games: losing two and drawing one against teams that were heavily favoured – Heidenheim (4th) and Darmstadt (5th) – but also dropping points against 15th-placed Nurnberg, who are six points below them and precisely the type of opposition they need to be beating at this stage of the campaign.

To their credit, Karlsruher have shown improvement since the break: unbeaten in four, they were 2-0 winners over Darmstadt on the returning weekend and held better opposition to frustrating draws since then.

However, questions still remain. With four matches to play after this one, have they left their fighting spirit and collective resiliency too late in the season? Stuttgart and leaders Bielefeld feature among a tricky schedule, where they need to earn better results than simply draws to ensure their 2. Bundesliga safety.

To maximise the chances of doing so, they’ll need continued matchwinning displays from midfielder Marvin Wanitzek and striker Philipp Hofmann. Between the pair, they’ve scored 17 goals with a further 14 assists in Germany’s second division this term.

Aue’s form has been both frustrating and unpredictable recently, so it’s hard to say whether they have what it takes to come through with a win.

Dimitrij Nazarov leads their goalscoring charts with 10 goals this term, but has only netted two from open play in 2020 (from 10 matches) and was an unused substitute during their comfortable defeat by Heidenheim last week.

Karlsruher should win this, not least given their added motivation to prevail – Nurnberg face a trip to leaders Bielefeld and are not expected to pick up a positive result.

Should Christian Eichner’s men prevail in this fixture, they will overtake them into 15th and emerge out of the relegation places with four games to play – leaving their 2. Bundesliga destiny in their own hands.

Alvarez is expected to start for Osnabruck, who target an unlikely win against Stuttgart

After a bumpy return to 2. Bundesliga action last month, promotion hopefuls Stuttgart will be eyeing their third successive win when they host relegation-threatened Osnabruck on Sunday lunchtime.

Their last-gasp 3-2 win against Hamburg on May 28 blew open an already exciting promotion race, but Stuttgart will be keen to reaffirm their place as the division’s second-best side when they entertain Osnabruck.

Sunday’s visitors are also looking over their shoulder, albeit for completely different reasons. Their 2-0 win over Furth on May 26 marked a first league win since mid-December and remarkably, they sit 14th – four points above the relegation places.

However if results go against them this weekend, they will be closer to the relegation play-off place in 16th or worse, automatic relegation into the country’s third-tier.

To reduce their chances of suffering yet another defeat, they’ll need to keep midfielder Gonzalo Castro and forward Nicolas Gonzalez quiet, which is easier said than done.

Castro created three key passes in Stuttgart’s 2-0 win over Dresden, while Gonzalez was a constant threat – winning eight of nine contested duels and proving a constant nuisance in the final third.

Osnabruck are likely to hand German striker Marcos Alvarez his first start since their 6-2 defeat by Wehen in March, after his well-taken brace helped salvage a point against Regensburg last weekend.

Their form tells a familiar story: they have been awful at times this term, yet still have an opportunity to turn their fortunes around and finish a forgettable season on a high while avoiding the relegation places.

Stuttgart though, possess ample creative quality and should prove too much for them to handle defensively. When you consider what’s at stake for them, strengthening their stranglehold on an automatic promotion place, it’s hard to look past them winning here.