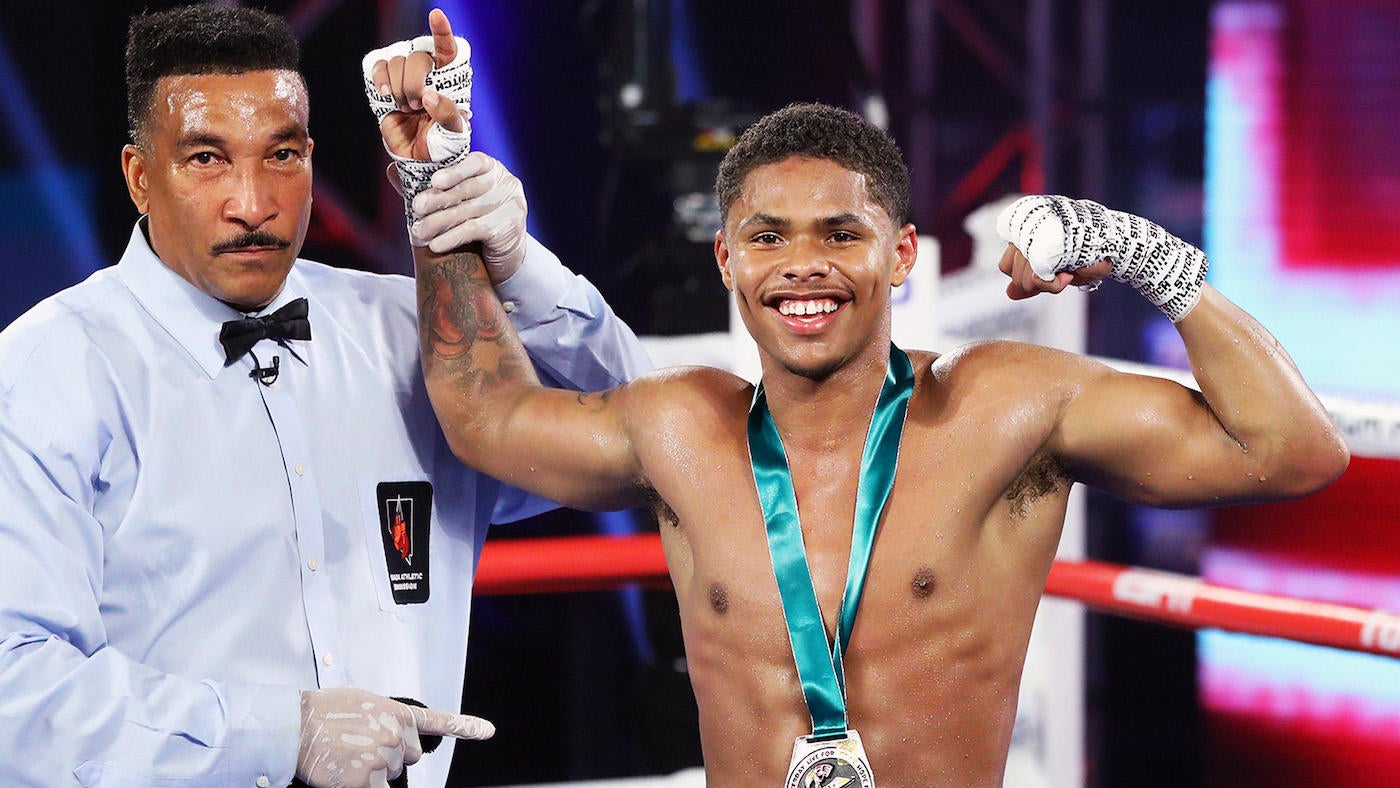 WBO featherweight champion Shakur Stevenson was again victorious, this time with a nasty body shot vs. Felix Caraballo, during the main event of boxing’s first US-based event since the coronavirus pandemic halted sports worldwide in March.

The overwhelming favourite, and for good reason, Shakur Stevenson took this fight as a much-needed opportunity to return to in-ring action – after eight months away – while earning invaluable rounds’ experience against a determined Felix Caraballo, who was keen not to be embarrassed the same way many others had been earlier on this card.

In a junior lightweight fight at 130lbs, the 22-year-old’s title was not on the line but his Puerto Rican opponent (13-2-1, 9 KOs) remained fairly mysterious beforehand.

This was his first KO loss in six years as a pro, one he couldn’t have any complaints about after failure to adapt to Stevenson’s channelled aggression and ridiculous hand speed.

Caraballo was praised by ESPN commentators for his early pressure, looking to take the fight to Stevenson and present him an arduous fight where he’d be punished for overlooking the 33-year-old’s ability.

Soon enough though, it was clear they had key differences in quality. After setting up a number of punch combinations without much in the way of resistance, Shakur scored a knockdown with a body shot that floored Caraballo momentarily.

This was merely a sign of things to come.

In rounds two and three, Stevenson’s laser-like accuracy was on full display while Caraballo continued futile efforts to force the issue without much punch output.

He looked like he was going to fall over, dropped his head down and you could sense him gritting his teeth at some of the stinging shots absorbed as Felix stumbled at times.

To his credit, he stuck in there but struggled to land and expended energy aplenty with each passing minute: landing just seven of his 82 punches thrown in R3, for instance.

R4 and R5 saw more of the impressive intracicies within Stevenson’s game, as he picked his punches with patience while making Caraballo miss a lot more.

Their different stances meant the pair were stepping on each other’s feet at times, which naturally can impact both balance and momentum – but Shakur was unmoved.

Instead, he showed his capability to box at range, in close with excellent head movement, and equally pushing the pace himself with frequent three or four-punch combos.

This encounter resembled somewhat of a sparring session and it felt inevitable that a knockout of some kind was also on the horizon. Stevenson duly obliged in R6.

After referee Tony Weeks called for a temporary stoppage as Stevenson landed an accidental low punch on Caraballo, the bout was over less than 90 seconds later after another bruising body shot proved too much to handle.

Landed right on the solar plexus, the Puerto Rican curled into a ball on the canvas, groaning in excruciating pain as Shakur nonchalantly walked past him. Job done.

Caraballo took a significant step up in competition with less than four weeks’ notice, had won five successive bouts before this encounter – but none near Stevenson’s level.

Shakur admitted his opponent was tough, having put him in danger a number of times.

“He took a lot of punishment, and I started realising that the head shots wasn’t going to get him, so started going to the body more. He opened up wide, and I caught him with a clean punch, right in the middle of the shot.”

Meanwhile, his promoter Bob Arum was full of praise and had this to say:

“What a magnificent performance by Shakur. He keeps getting better and, rest assured, he is a future pound-for-pound superstar.”

He was seen shaking his left hand and winced slightly in R5, receiving medical attention backstage post-fight. Yet, he still landed the final punch with that same hand.

Given his defensive abilities, he was only hit with 18 punches over their six rounds but felt it was more upon reflection.

“I felt like it was a lot, felt like he hit me a lot more than he [actually did]. It’s a different atmosphere, losing the weight was different, training and no crowd too.”

On the continuous comparisons between himself and Floyd Mayweather: “I appreciate it, but we’re two different fighters with different styles. I stole stuff from a lot of guys – Pernell Whitaker, Andre Ward, Terence Crawford…”

Statistic: Since 1990, Stevenson now joins only Oscar de la Hoya and Mayweather as Americans who were undefeated as a professional, earned an Olympic medal and world title through the age of 22. He turns 23 on June 28.

Other fights on the card – intriguing talents to watch out for

20-year-old American talent Jared Anderson was dominant during a R3 TKO victory over Johnnie Langston, extending his record to 4-0 while earning some much-needed rounds under his belt.

Heralded as an unsung hero of Tyson Fury’s camp after sparring with him before the Brit earned a R7 win vs. Wilder earlier this year, the 6’4 nicknamed Big Baby landed 68 of 130 power punches thrown in ten minutes, including 26 before the referee had no choice but to stop the fight with Langston visibly overwhelmed and crouching down near the ropes.

On his win, whether he’s learned any lessons and who has helped vary his punch output:

“It was amazing, get some experience and a great feeling. He landed a good uppercut on the inside, I need to look out for that a bit more [in future], being around great fighters, Keyshawn Davis, Stevenson, etc… they always go to the body.”

In the evening’s other heavyweight clash, former Olympian Guido Vianello eased to a first-round knockout against Donald Haynesworth. 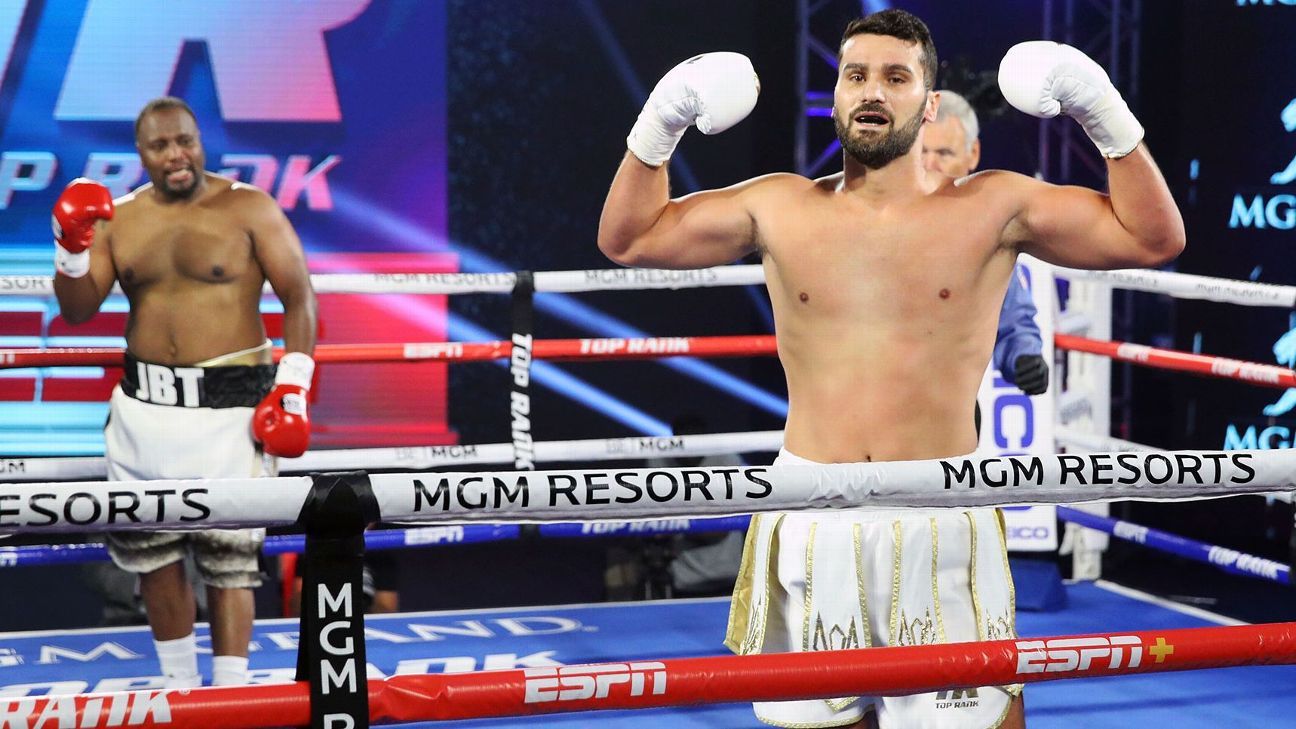 Vianello was comfortable in his R1 knockout win over Haynesworth

It was clear to see the Italian was overmatched by a beefy American opponent who tried to joke with the official when asked about his welfare in the corner after being knocked down flush with a right hand. It rather typified a fight that shouldn’t have gone ahead.

In the middleweight division, Quatavious Cash won quite comfortably against a gamely Calvin Metcalf via the judges’ scorecards (60-55, 60-54, 59-55).

This was after the referee called for a stoppage as Metcalf sustained a cut following an accidental clash of heads in R2, which was worsening near his eye.

In the night’s first fight, featherweight Robeisy Ramirez was victorious against Yeuri Andujar within a minute of their clash.

Two knockdowns were enough to see him cruise to victory, winning his third successive fight after suffering a shock defeat on his pro debut against Adan Gonzales last year.

COVID-19 pandemic: Mikaela Mayer (12-0) had a ten-round lightweight bout against Helen Joseph, initially slated for the night’s co-main event, postponed after she tested positive for coronavirus upon arrival in Las Vegas.

“I felt sorry for myself during the 13-hour car ride home to Colorado, but that’s about it. I’ll be back as soon as possible, done another test today and should be back [in competition] next month hopefully.”