A second-half penalty and excellent assist from Lucas Ocampos proved key for Julen Lopetegui’s Sevilla side, who made their pressure count against underwhelming local rivals Real Betis as the La Liga season resumed on Thursday.

Sevilla start brightly, but with no reward for their efforts

Sevilla, 14 points and eight places above Betis, started precisely like the Champions League-chasing side they are under Julen Lopetegui.

The hosts regularly looked at fullback Sergio Reguilon (on-loan from Real Madrid) and Jesus Navas to provide reliable width with probing runs down the opposite flanks.

The former was more successful, even against a determined adversary in Emerson, but the game’s best chance fell to Argentine winger Lucas Ocampos. Waltzing past two defenders, the Sevilla man hit the crossbar with a powerful strike from a narrow angle.

Betis appeared shaky with their distribution out of defence, as goalkeeper Joel Robles and midfielder Guido Rodriguez were not entirely convincing.

Jules Kounde timed his run to perfection but headed narrowly wide, failing to punish a static Betis backline from a corner, as centre-back Sidnei and Rodriguez were caught ball-watching.

A few minutes later, Munir turned his man inside out before fizzing a good delivery across the box. Luuk de Jong flashed the resulting effort wide, before glancing an apologetic look to his winger – he knew he should’ve done better to break the deadlock.

Diego Carlos slid in well to dispossess Nabil Fekir beautifully as he lurked dangerously near the Sevilla box, rather typifying a frustrating evening for the France international. 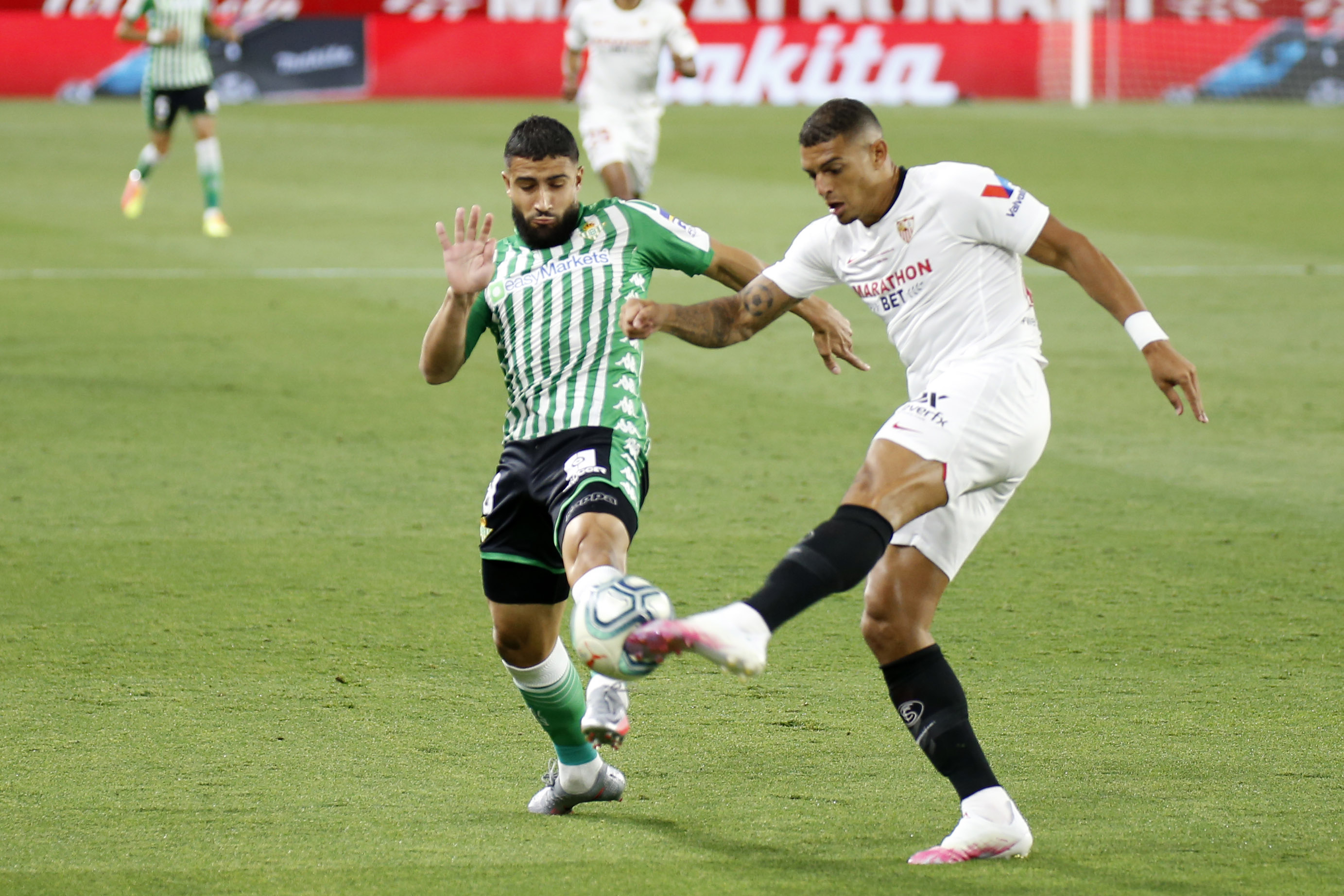 Fekir (left) was effectively nullifed by an alert Sevilla defence, keeping him quiet and frustrated

He, Carles Alena (on-loan from Barcelona) and Sergio Canales were all fairly quiet for the visitors, something which seemed unlikely to last as the match continued.

Sidnei was kept busy and alert defensively, as Munir and de Jong combined again before the latter came close as they intensified their efforts to open the scoring.

After quick thinking and a well-executed long kick by goalkeeper Tomas Vaclik, Ocampos forced Robles into a save just moments before half-time – reaffirming Sevilla’s early dominance.

Hosts find the opener, after Bartra gives away dubious penalty

Rubi was forced into the first of his five substitutions, as Sidnei was replaced by Zouhair Feddal – with the experienced Brazilian presumably sustaining an injury.

His skewed effort was gratefully smothered by Robles, though he was helpless just minutes later as Sevilla eventually found the all-important breakthrough on 56 minutes.

Despite Marc Bartra passionately protesting his innocence, referee Antonio Mateu awarded a penalty and the decision stood. Bartra used de Jong as an auxiliary springboard to rise high and head the ball clear from a Sevilla corner, illegally.

From the spot-kick, the club’s leading goalscorer Ocampos made no mistake – sending Robles the wrong way to slot home. 1-0 Sevilla, you couldn’t say it wasn’t coming. 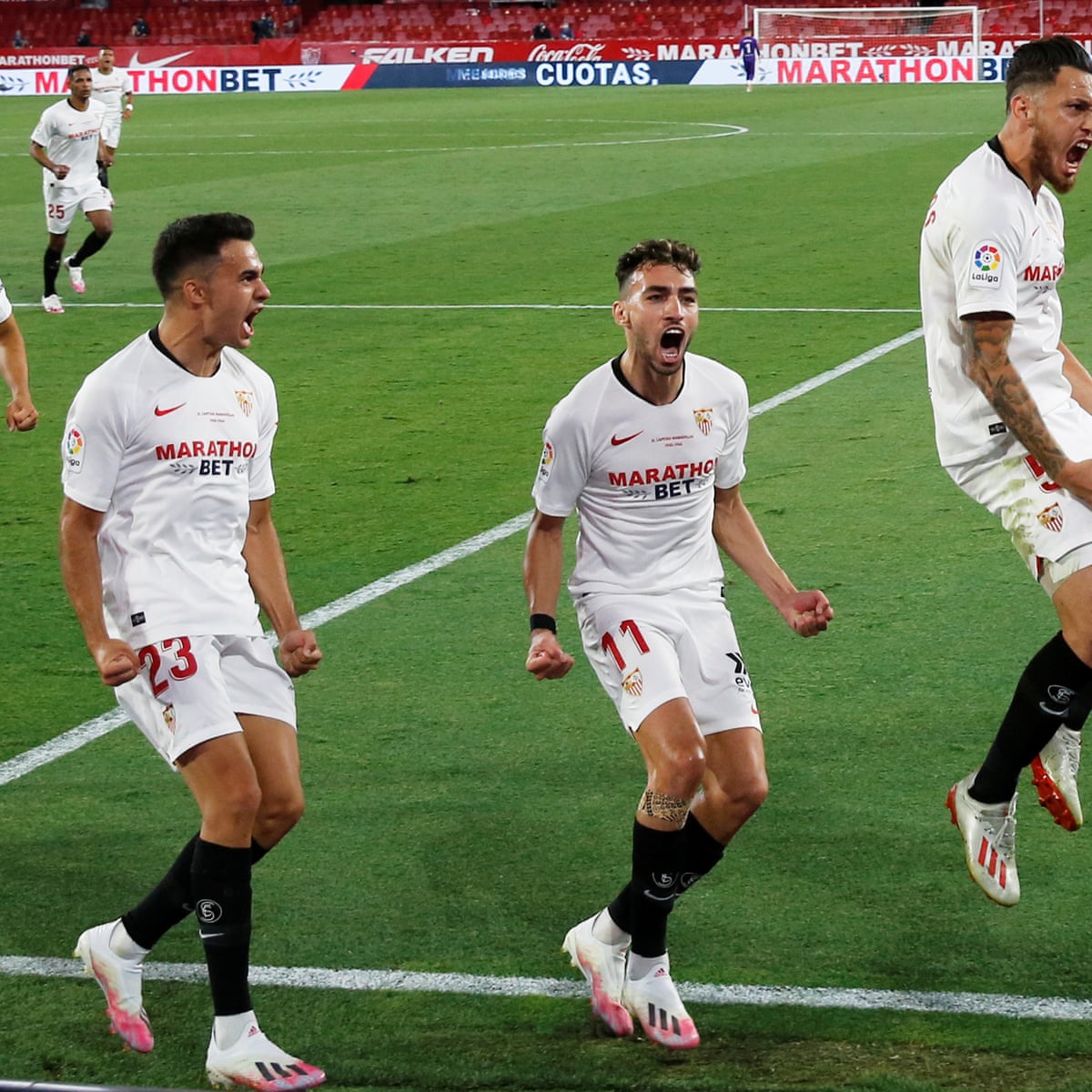 Nonetheless, Betis didn’t heed the warning signs and were duly punished just six minutes later. Oliver Torres’ excellent floated delivery was destined for Kounde who lurked near the far post, but for an important intervention by Feddal.

From the corner, they doubled their lead as defensive midfielder Fernando headed home from close-range. Ocampos’ excellently improvised backflick saw the former Manchester City man beat Emerson to the ball, before angling his effort beyond Robles.

The worrying ease at which Betis conceded their second sparked the visitors into life, as Borga Iglesias came close but headed past the post in his last action of the evening.

Diego Lainez caused all sorts of problems – more than Cristian Tello and others could say – off the bench in the final half-hour, while Joaquin, unhappy about not starting, made his presence felt once introduced after Sevilla doubled their lead.

Betis showed urgency, albeit 70 minutes too late, as Kounde and Carlos were both called into making important defensive contributions under pressure.

Both sides made all of their five available substitutions, though Los Palanganas held firm after six stoppage-time minutes to earn a much-needed derby win and clean sheet.

Betis remain 12th, as this result means they’ve only won two of their ten top-flight fixtures in 2020. Even after an enforced break, this was a frustrating display and one that will not provide Rubi with much confidence they can finish the season strongly.