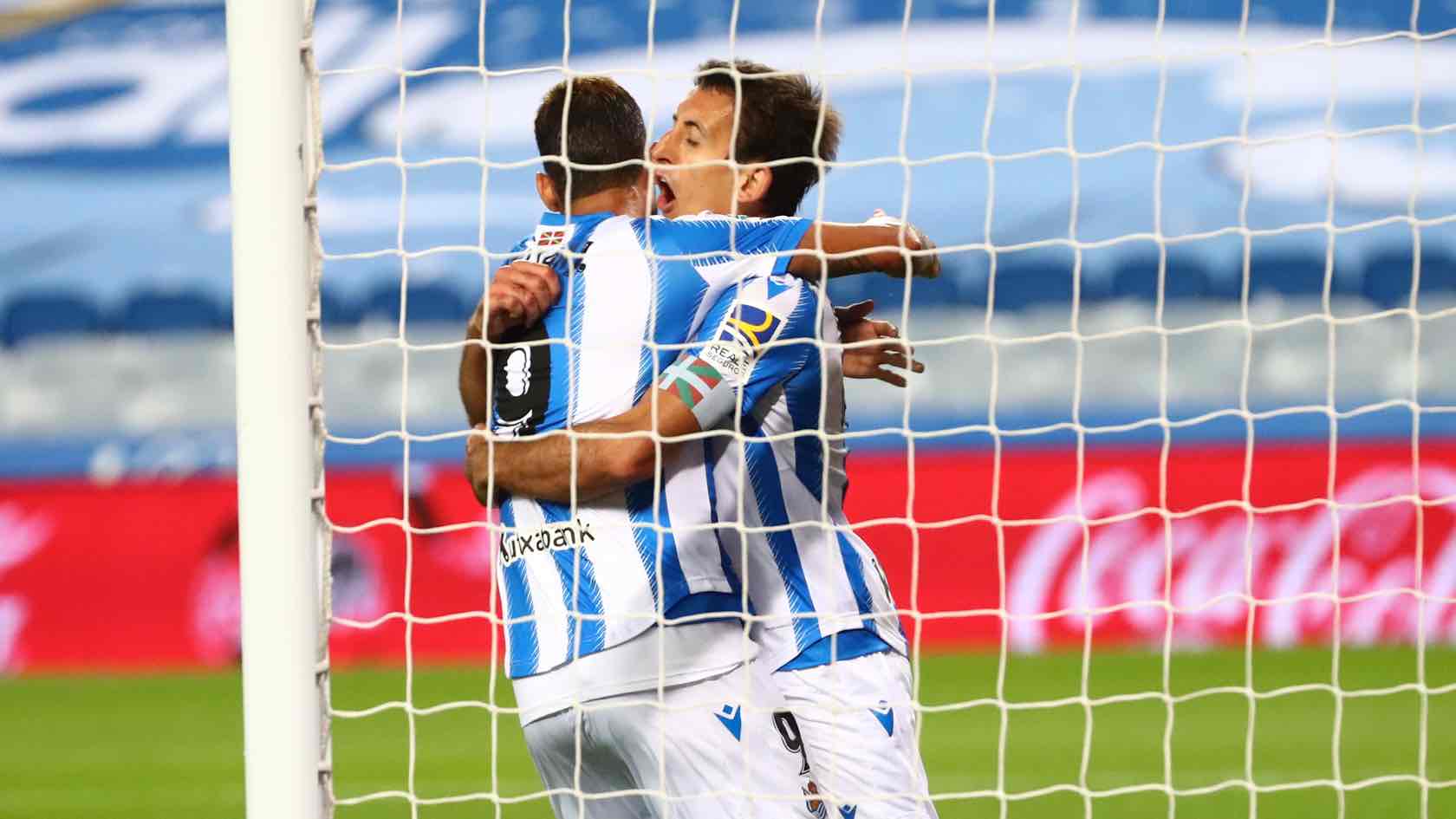 After results went in their favour across this weekend, this wasn’t the return they would have wanted but Real Sociedad were forced to settle for a 1-1 draw against a stubborn Osasuna display on Sunday. Mikel Oyarzabal’s ninth La Liga goal of the season proved key, having recovered from a frustrating start to share the points.

Although Sevilla were victorious as La Liga returned to our screens on Thursday, all three of Sociedad’s direct Champions League-chasing rivals dropped points this week.

Atletico Madrid and Valencia both drew, while fifth-placed Getafe were humbled by a second-half comeback as Granada beat them 2-1 on Friday.

It meant Imanol Alguacil’s side had a golden opportunity to create separation between themselves and the chasing pack for fourth place, with a win on this occasion.

Instead though, they were trailing after the half-hour mark and found themselves suffocated by a diligent, disciplined Osasuna display off-the-ball.

Their 65% first-half possession didn’t matter, as the visitors regularly forced Martin Odegaard and Portu into non-threatening areas while retaining their shape throughout.

The 5-3-2 formation was certainly working wonders for Jagoba Arrasate’s side, who were biding their time patiently and waiting for an opportune time to pounce.

That came from the penalty spot, with Adrian slamming home to break the deadlock after defender Robin Le Normand – harshly or otherwise – was penalised for a handball.

It was the ultimate sucker punch: Adrian scoring his first goal since March 2019, for former club Benfica against Porto, after a speculative cross wasn’t dealt with. Already on a yellow card, their captain Oier was fortunate to stay on the pitch after committing a clumsy foul on Oyarzabal, which went unpunished by the referee.

That was a sign that perhaps their luck would continue. Alas, not for long.

Whatever Alguacil told his players at half-time worked wonders, as the hosts returned a much more assertive side immediately after the restart.

Portu and Oyarzabal both missed promising chances in the first few minutes, as Osasuna did their best to stay firm defensively and not wilt under pressure.

Odegaard, their best player this season, tried to overcompensate for a lacklustre first-half by overcomplicating his passes and constantly looking to provide the killer pass. 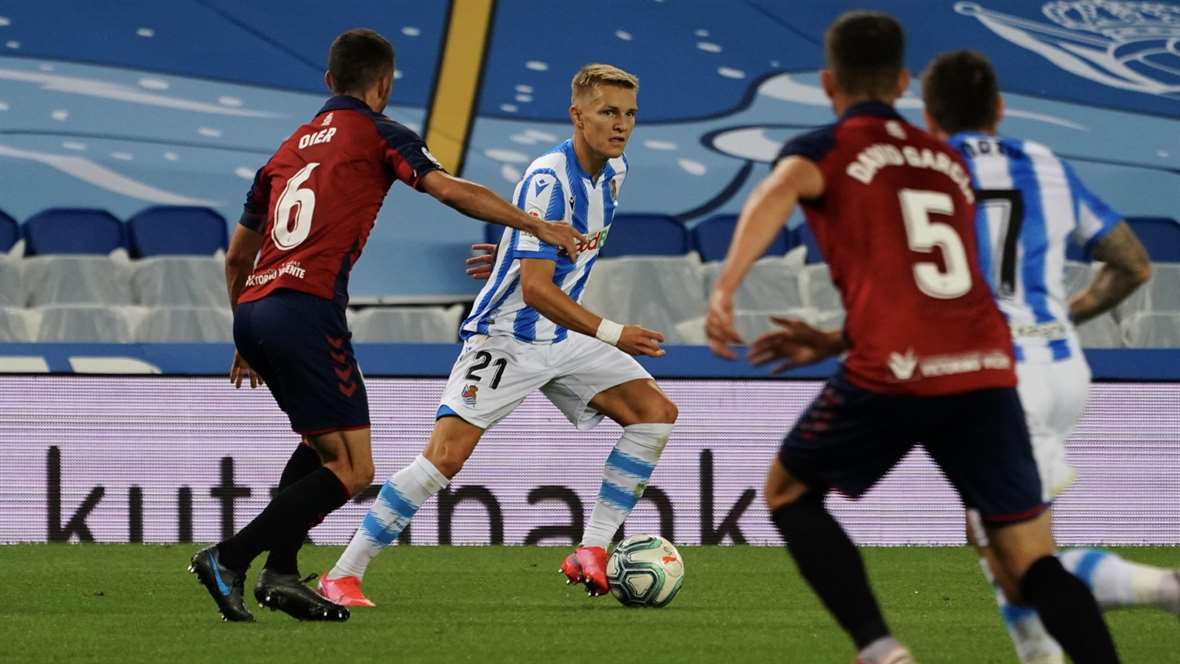 Odegaard was left stifled by Osasuna for large periods, keeping him in non-threatening areas

Portu continued his persistence, accelerating into the box and causing havoc for the Osasuna backline, before the ball broke free for Oyarzabal.

He forced goalkeeper Ruben Martinez into a good low diving stop, before striker Willian Jose headed over as Sociedad’s pressure continued to intensify.

More aggressive in the tackle, forward runners provided width and ten minutes into the second-half, Real were also a counter-attacking threat too. An equaliser was inevitable.

It came just after the hour mark, as Mikel Merino’s tackle on Oier near the halfway line set Jose free in space to advance into the final third.

Centre-back David Garcia suddenly had a dilemma to resolve: stick to an overlapping Oyarzabal or press the ball? He did the latter, prompting the Brazilian to deftly slip the winger through on-goal – while staying onside – before calmly slotting into the corner. 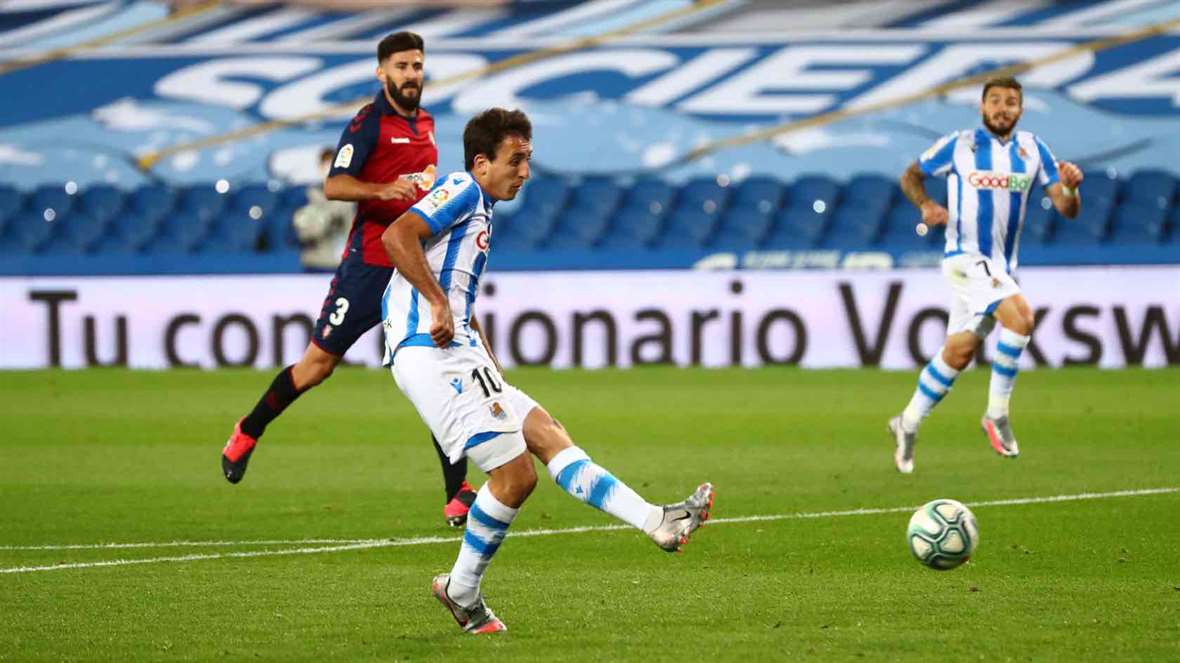 Oyarzabal made no mistake from close-range, netting his ninth goal of the campaign

Sociedad’s breakthrough prompted a number of substitutions for both sides, as neither was content to settle for a point.

Alexander Isak and Adnan Januzaj made cameo appearances from the bench, though the hosts were also fortunate not to have conceded a late winner themselves.

Alex Remiro had to make an acrobatic tip over his crossbar, before being all too casual with his distribution and almost being at fault for a freak goal in his six-yard area.

Then in stoppage-time, midfielder Darko Brasanac almost snatched all three points with his first league goal for Osasuna. However, his audacious backheel trickled inches wide. 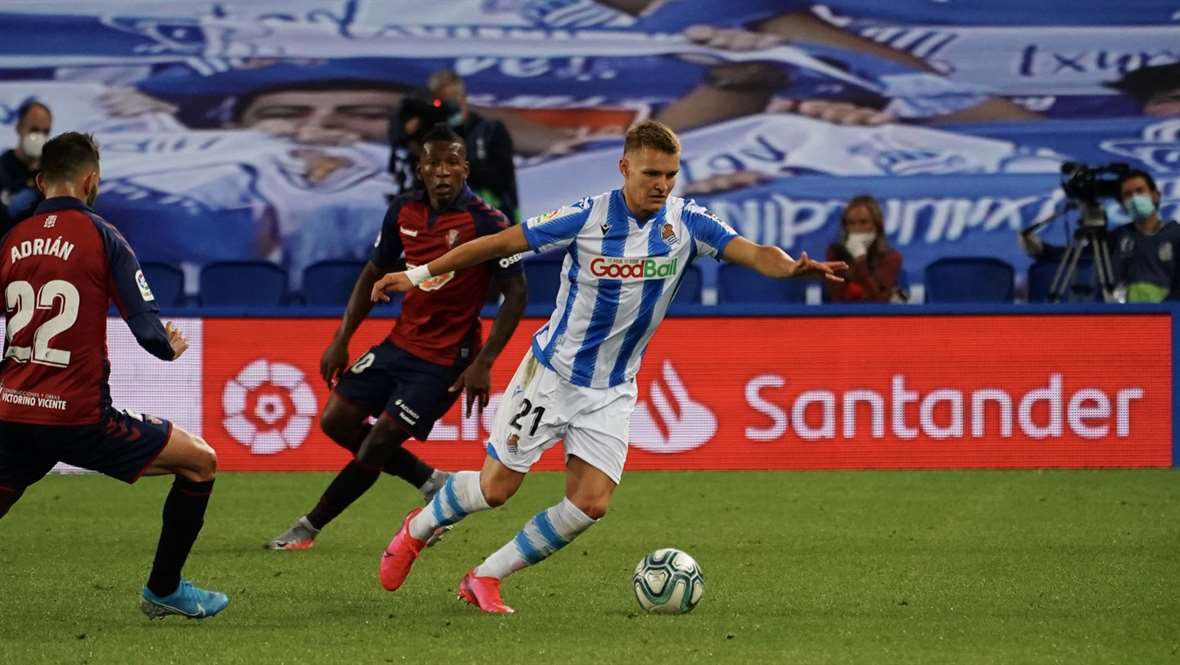 I would be lying if I said I wasn’t watching this game for a reason, that mainly being creative midfielder Martin Odegaard – on-loan from Real Madrid.

While his parent club cruised to a 3-1 win over Eibar earlier this evening, it was also clear that the Norway international needs to have more influential displays if Sociedad are to earn Champions League qualification for next season.

Granted, they’ve had a three-month hiatus and it’s unfair to expect a world-class performance on your return to action, but I expected to see more from Sociedad’s best player.

In the first-half, he exchanged promising passes with Oyarzabal and Portu, both coming to no avail, but every time he attempted to get on the ball, he had opposition company trying (and succeeding) to force him backwards.

Although he occupied dangerous positions and was floating across midfield, he was left frustrated by team-mates not being quicker with their distribution into his path.

He had 80 touches, with 56 passes completed (86.2% success rate), but struggled with his set-piece deliveries and found himself on the periphery second-half, at a time where Sociedad stepped up their attempts to win all three points.

Instead, this game was all about captain Oyarzabal. After a quiet display here, Odegaard must do more to provide his teammates with incisiveness and a reliable outlet to combine alongside in the number ten role.

He has impressed already this term, but his creative influence was steadily dropping off before the enforced break. With ten games to play, they need him now more than ever.

Sociedad will look to return to winning ways when they travel to 15th-placed Alaves on Thursday, before games against Real Madrid, Celta Vigo and Getafe to finish June.