Goals from Ansu Fati and a Lionel Messi second-half penalty sealed successive wins for La Liga leaders Barcelona, who overcame a stiff Leganes challenge to continue their encouraging return to action on Tuesday evening. Which players excelled while others struggled at the Nou Camp?

Leganes started brighter at the Nou Camp and could’ve gone 2-0 up themselves early on, after striker Miguel Angel Guerrero came close with two promising attempts in dangerous counter-attacking moves.

Fati, making his first start since mid-February, combined with fullback Junior Firpo inside the box before slamming home with aplomb on the stroke of half-time.

In the second-half, Antoine Griezmann had a close-range finish correctly ruled out for offside by VAR, as substitute Nelson Semedo was fractionally ahead of the play when Messi fed the ball into his path. However, Messi himself got on the scoresheet just four minutes later.

Hauled down to ground by Jonathan Silva after a marauding run through midfield from the halfway line, the Barcelona captain made no mistake with the resulting spot-kick to score his 21st league goal of the campaign.

Messi’s 699th goal for club and country, the hosts were not satisfied with a two-goal cushion and instead probed in search of more goals late on as fresh legs were introduced by both sides.

Again, despite flashes of their collective brilliance, Barcelona prevailed without being on top form. With a hectic fixture schedule – they play Sevilla on Friday – it’ll be interesting to see how Quique Setien continues rotating his side going forward and whether they can continue this winning run between now and the season’s end in July.

After Espanyol’s goalless draw at Getafe, this result means Leganes also drop to bottom of the division and face an uphill climb to avoid relegation this summer.

Leganes and Mallorca both have zero points from their two games since coming back – so their meeting at Son Moix on Friday is prety, pretty big.

Without further ado, here’s a look at five hits and flops from Barcelona’s latest victory: 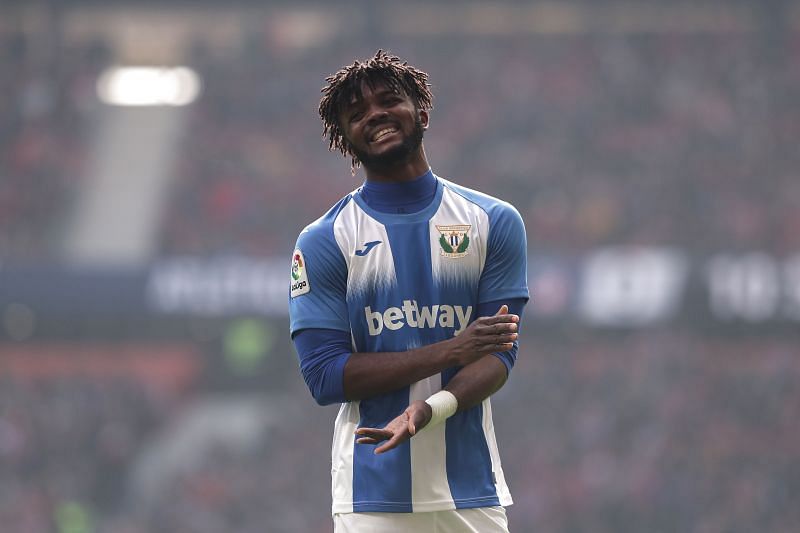 Awaziem was sluggish, clumsy in the tackline and didn’t exude confidence in a poor display

Not playing alongside his usual centre-back partner in Kenneth Omeruo, Awaziem appeared a step slow to react in dangerous situations throughout the evening and it proved costly.

Griezmann and Fati in particular got the better of him far too easily, with the latter showing good composure to open the scoring – while the Nigeria international was caught ball-watching.

Although the former’s goal was correctly ruled offside, you could see Awaziem’s lack of awareness on display again, failing to sense danger quickly enough to snuff Semedo’s pass out before it got to the Frenchman inside the area.

He was reckless in the tackle, committing four fouls over the 90 minutes, while distribution was poor (72.2%) and the 23-year-old struggled to impose his defensive quality in a game where they needed him to step up. Instead, he played within himself and was a weak link. Making his first start since February, the teenage winger was promising in the early exchanges and looked to combine alongside Junior Firpo.

However, he also became increasingly isolated out on the left-hand side and when he did receive possession, usually tended to opt for a safer pass or decision, reducing the risk of being countered high up the pitch.

Crucially though, Fati showed precisely why he was in the team just before half-time.

He remained composed under pressure and slammed home a precise finish through traffic inside the area, after tenacious work in the build-up by Firpo to battle past two defenders.

Leganes goalkeeper Ivan Cuellar did well to react quickly whenever danger was lurking in his area, but the 36-year-old had no chance as Fati drilled his strike into the bottom corner.

Netting his fifth league goal of the season helped his confidence levels as he took on players with more conviction before being replaced by Luis Suarez ten minutes into the second-half.

Being preserved for later days perhaps? We’ll have to wait and see, but Fati has again shown why he’s Barcelona’s secret weapon in the final third. 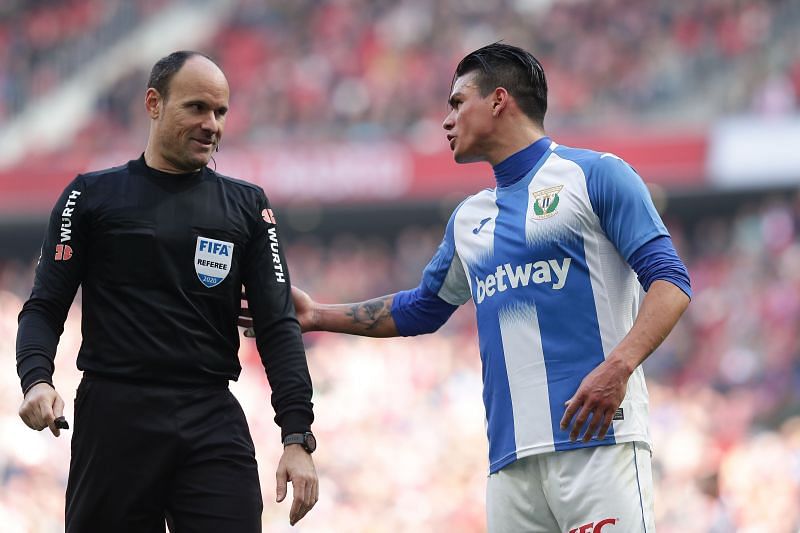 Silva struggled under pressure, while giving away the penalty from which Messi converted

It’s never an easy task facing Barcelona, especially as an opposition defender. But as fullback Jonathan Silva experienced one of his worst displays this term, his only saving grace was being replaced by Rodrigues after 70 minutes.

The 25-year-old made two interceptions and one tackle, but should have done so much more in a defensive sense while on the pitch.

His captain Unai Bustinza was busier as a direct result of trying to cover for him, as time wore on and Messi’s influence grew on the evening.

He failed to use possession well (68% pass success), won just two of his six duels and committed two fouls – including the penalty, from which his compatriot cooly dispatched.

Although he pleaded his innocence to referee Juan Martinez Munuera, conceding a rather needless penalty with plenty of players still surrounding Messi, typified an evening to forget. 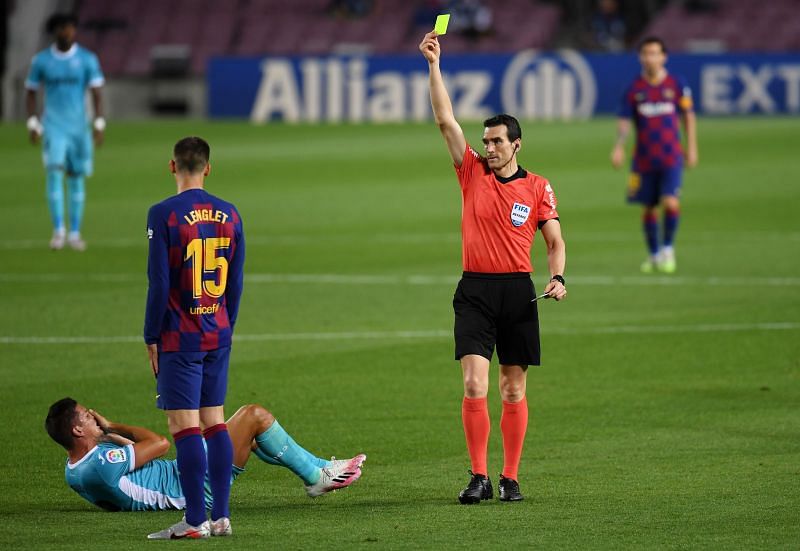 The only blemish on Lenglet’s returning performance was a late, albeit harsh, booking

Having missed Barcelona’s 4-0 win over Mallorca through suspension, the 25-year-old Lenglet returned to partner Gerard Pique as the Blaugrana earned another gritty clean sheet.

They could have been staring down a two-goal deficit after 15 minutes, but largely had Lenglet to thank that the scores were still level in a match which again highlighted Barcelona’s defensive weaknesses.

A tendency to push their fullbacks up in possession leaves Quique Setien’s side exposed in transition on counter-attacks.

While Pique isn’t the quickest, Lenglet’s acceleration is an underrated asset of his game and one he used well to calmly remove danger under pressure.

He dispossessed Javier Eraso cleanly, before anticipating danger and sweeping Guerrero’s effort away from Barcelona’s goalline after the rebound fell to the striker.

Lenglet remained the epitome of composure in possession too, with a game-high 96.9% pass accuracy on 124 completed passes, while the only blemish on his fine return display was a booking after coming off second best in an aerial duel late on.

While young Ronald Araujo impressed and did his reputation no harm this past weekend, Lenglet proved why he remains Barcelona’s first-choice in central defence when available. 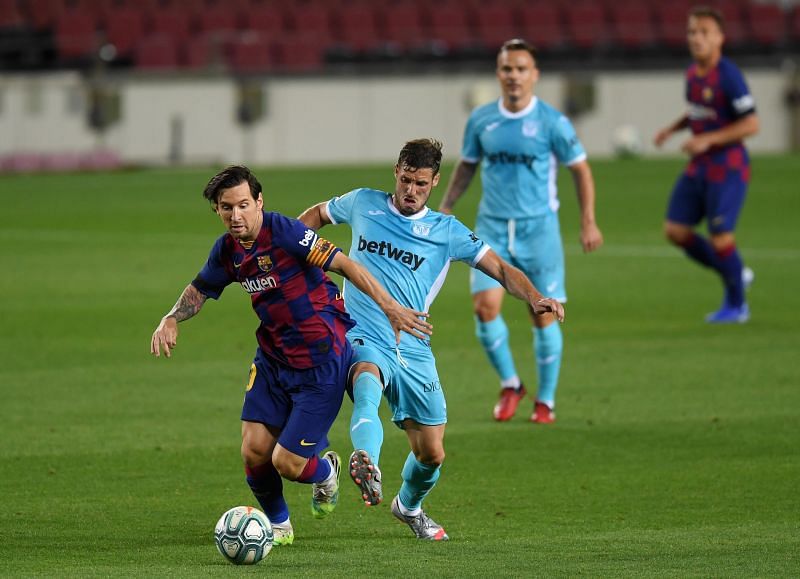 Messi was a constant nuisance for Leganes, despite efforts to double and triple up on him

Last but certainly not least, Barcelona captain Messi was again the hosts’ best player on an evening where fine margins determined the outcome of this fixture.

He did his utmost to help create defence-splitting passes for teammates, who didn’t help matters by making the right runs or intelligent movement to make the most of his creativity.

Pique and substitute Suarez were close to latching onto his lofted deliveries, though an inch-perfect pass for an overlapping Semedo proved too good to be true in the build-up to Griezmann’s disallowed finish.

His determination and deceptive levels of agility were on full display, launching an attack from seemingly nothing near the halfway line.

He combined with Suarez before drawing a penalty after a combination of Ruben Perez and Silva hauled him down to ground.

Lionel Messi has now been directly involved in more league goals this season than any other player in Europe's top five leagues:

After a three-minute delay, he showed nerves of steel to send Cuellar the wrong way and slot his well-taken penalty into the bottom corner.

A goal, four dribbles completed, 11 of 23 duels won and fouled a game-high six times, it’s fair to say Leganes’ backline couldn’t deal with him – even though they put two or three players on him in a futile attempt to slow the Barcelona talisman down.