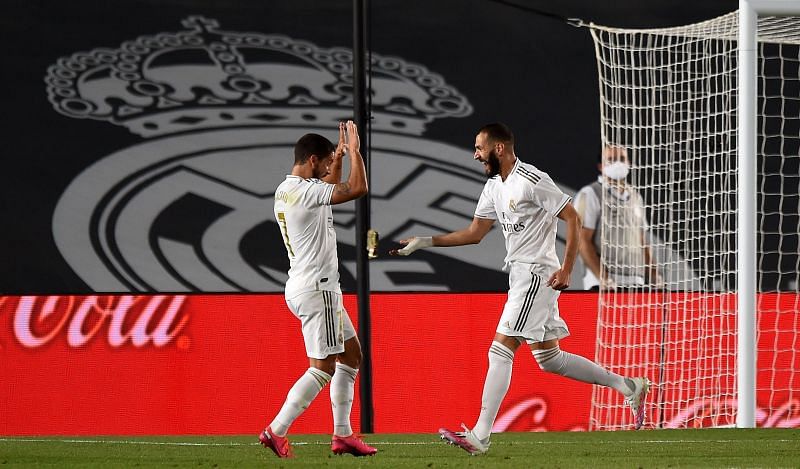 Real Madrid were made to work hard, but ultimately came through unscathed with an important 3-0 home victory over Valencia on Thursday evening. Who excelled, while others wilted under pressure at the Alfredo di Stefano Stadium?

Karim Benzema netted a well-taken brace, while substitute Marco Asensio marked his return to action after a lengthy injury lay-off with a goal and assist in an action-packed second-half.

It was far from plain sailing for Zinedine Zidane’s side in the first-half, where Valencia had a goal ruled out after a lengthy VAR review.

Rodrigo thought he’d broken the deadlock midway through the first-half, but was overruled as teammate Maximiliano Gomez strayed offside and was adjudged to have touched the ball in the build-up, before the Spaniard fired past Real’s Thibaut Courtois.

Courtois watched helplessly as Rodrigo hit the post from a tight angle minutes earlier, while being forced into an acrobatic stop to deny Geoffrey Kondogbia’s powerful strike from distance. Real were certainly under the kosh, despite creating chances of their own.

Dutch goalkeeper Jasper Cillessen was the visitors’ best player, making first-half saves from Eden Hazard and Dani Carvajal to keep the scores level. It was only a matter of time though, before that would all change after the interval.

Sergio Ramos won the ball forcefully from substitute Kevin Gameiro near the touchline, before his pass upfield saw Hazard and Luka Modric combine dangerously in the final third.

A stretching Hazard pipped talented young centre-back Hugo Guillamon to the ball, sliding across a pass for Benzema in space to his right. The experienced Frenchman made no mistake, slotting into the bottom corner to score the opener on the hour mark.

It went from bad to worse for Valencia 15 minutes later, as Asensio doubled the hosts’ lead with his first touch just seconds after coming on.

Ferland Mendy left Daniel Wass in his rearview mirror, before fizzing the ball across the box which was met with a lovely first-time finish by the Spaniard.

The icing on the cake for Zidane’s men came after 86 minutes. Casemiro slid in well to effortlessly dispossess substitute Goncalo Guedes, before Toni Kroos released an excellent crossfield pass towards Asensio. His flick into the box still left Benzema with work to do, he took a touch to control before slamming into the top corner with aplomb.

Valencia sub Kang-in Lee was shown a straight red card after a succession of cynical, needless fouls in a matter of moments on Real captain Ramos just before stoppage-time, where fellow sub Francis Coquelin pulled up with a suspected hamstring injury.

After such promise in the first hour here, the evening couldn’t have ended much worse for Albert Celades and Los Che. They host mid-table Osasuna on Sunday, eager to get their Euro-chasing aspirations back on track to finish this weekend with a win.

Real meanwhile, face an away trip to Champions League hopefuls Real Sociedad this weekend, looking to continue applying pressure on leaders Barcelona. Without further ado though, here’s a look at five hits and flops from Madrid’s hard-fought victory: 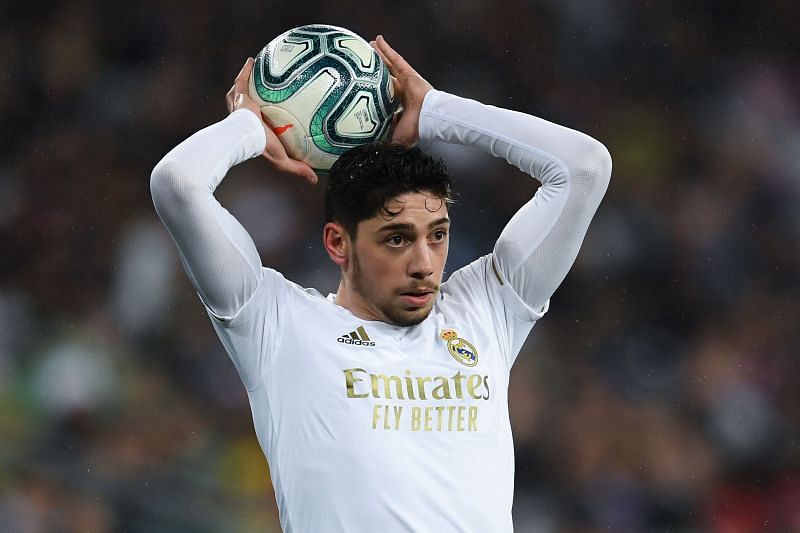 Valverde tested Cillessen from distance with an ambitious effort early in the second-half, but failed to occupy intelligent attacking positions when venturing forward and often found himself a spectator out of possession.

His case wasn’t helped by the fact that he was playing in an unfamilar role out as a wide midfielder, as opposed to centrally. Whenever he drifted infield though, the Uruguay international wasn’t viewed as a reliable passing outlet – instead you could see his teammates were often purposely missing him out of their passing combinations.

They didn’t trust his ability to build-up play as effectively as Kroos or Hazard down the right-hand side for example, which meant most of his scurries forward were used as dummy runs to distract or deter attention away from their intended targets.

He was replaced by Marco Asensio after 73 minutes, who made his long-awaited return from injury and was much more suited to that role as a left-sided midfielder anyway. 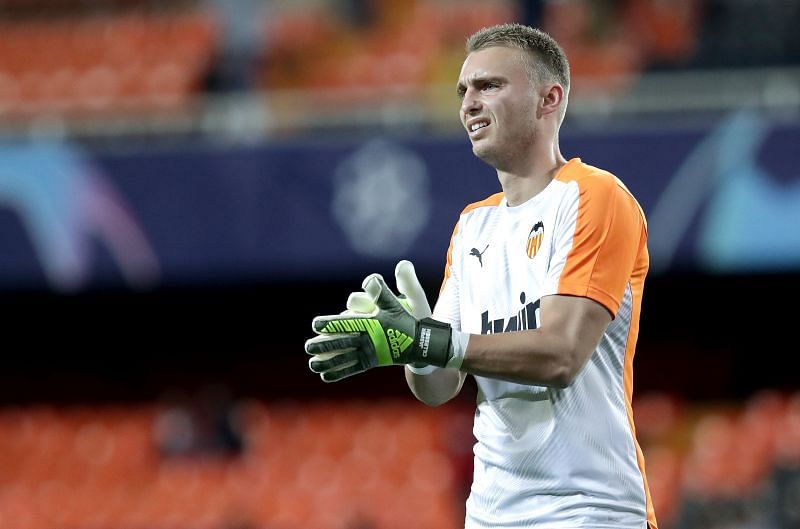 Cillessen made a number of important saves, as he would have expected, to keep Real Madrid at bay throughout – especially from Hazard and Carvajal in the first-half.

He often showed great anticipation and improvisation when Real players were baring down on goal. Making himself big and performing an outstretched leg save at his near post to thwart Carvajal’s deft effort, was just one example of that.

The 31-year-old quickly proved Valencia’s most reliable form of defence against their rampant hosts, who recorded 19 shots – 14 of which were on target over the 90 minutes.

He made a whopping 11 saves, but could do nothing about any of the three goals conceded. Importantly though, it didn’t deter him from continuing to stay busy and keep his side in the match as a contest for as long as possible, before Benzema’s sumptuous second strike. 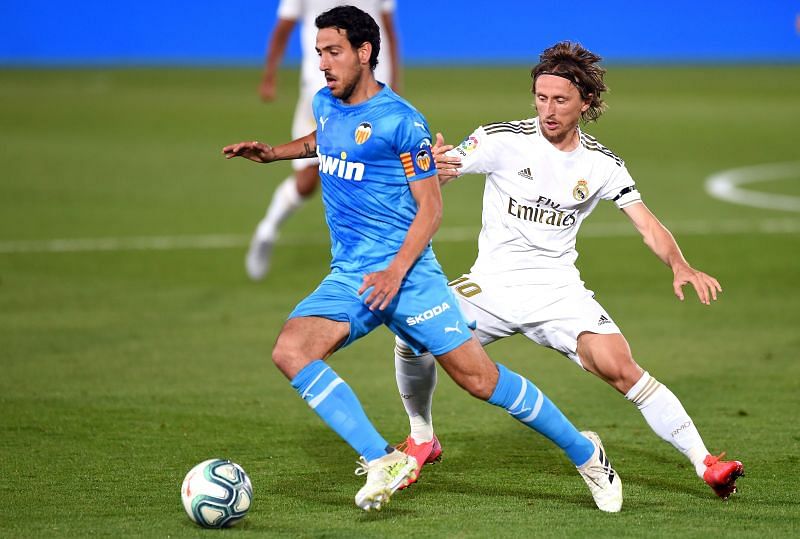 Parejo was left frustrated on this occasion, both in a creative sense and off-the-ball too.

His passing was largely poor at precisely the time where Valencia really needed their captain to lead by example and control possession under pressure, as they were being swarmed and increasingly overwhelmed – as Real continued to probe in the second-half.

He was dribbled past on three separate occasions, didn’t complete any defensive actions (blocks, clearances, interceptions or tackles) and lost possession ten times.

It meant more work for 20-year-old centre-back Hugo Guillamón, who did remarkably well considering the circumstances – but even he couldn’t stop Benzema and co from finding their groove as the match wore on.

Unsurprisingly, Parejo was replaced after 68 minutes in place of Coquelin, a change that probably should have been made sooner. By this point, Real had already sunk their teeth into a busy Valencia backline that were not adequately protected to break the deadlock. 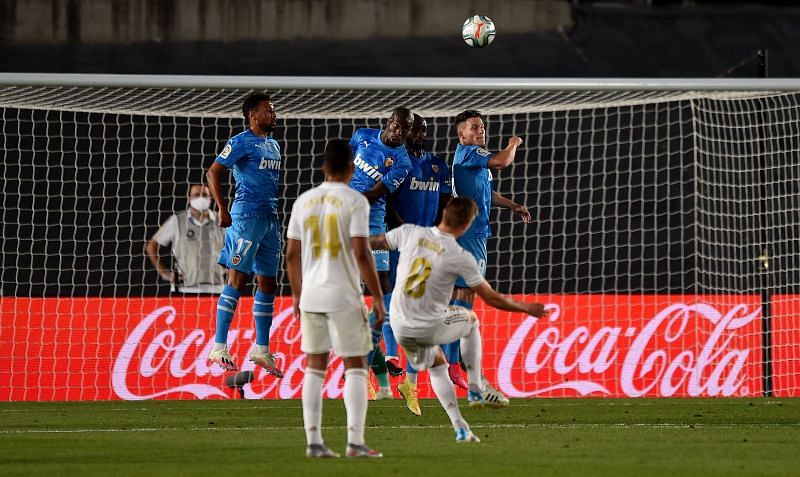 Kroos came close with a free-kick from distance, during another impressive midfield showing

As usual, Kroos embraced his role as Real Madrid’s pace-setter here. He was constantly looking to stretch the visitors and quicken play in equal measure with his incisive passes, something by contrast his teammates weren’t doing very often early on.

His influence is overlooked in games like these, where he doesn’t score or assist in an ultimately comfortable win, but if you watched this game live, you’d appreciate just how important the German’s experience and technical ability was enroute to winning here.

Unselfish as ever, he set Vinicius Junior through just seconds after the Brazilian’s introduction, which almost helped create their third goal. Jose Gaya’s last-ditch interception proved key in denying Asensio from scoring a brace off the bench.

It was his excellent crossfield pass which set Asensio on his way to tee up Benzema for their third goal, a little over ten minutes after the midfielder’s corner delivery was poorly cleared by Valencia defenders in the box.

Seconds later, Los Blancos doubled their lead. He also came close with a good free-kick from distance late on, one which Cillessen had to tip over the crossbar. 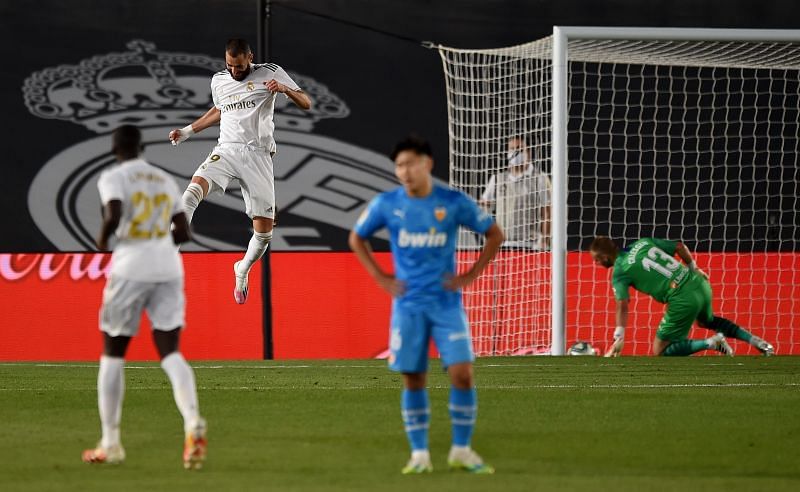 Benzema celebrates after scoring one of his career-best finishes, to help sink Valencia late on

He had to bide his time patiently and wait for his chances, but Benzema made no mistake when they fell into his path.

Karim netted a well-taken brace on this occasion, taking his tally up to 16 league goals this term – closing the gap on leading goalscorer Lionel Messi to five.

The Frenchman, who turns 33 in December, has shown no signs of slowing down and instead appears rejuvenuated by this enforced hiatus. Last time out against Eibar, he was okay but essentially starved of reliable service in the final third.

Despite a frustrating start, there was no such complaint this time, though he still had plenty to do after good work from Hazard and Asensio in the second-half.

His first goal was a razor-sharp finish, latching onto Hazard’s sliding pass before firing beyond Cillessen into the bottom corner.

To complete his brace and put the game beyond any doubt however, Benzema unleashed a moment of magic that few across the world can replicate.

Asensio’s lofted flick into his path still left him with a ball in mid-air that he did well to control under pressure from Guillamón, before letting fly on the volley with his left foot.

It’s increasingly clear that Zidane needs Benzema at his best if they are to achieve their lofty ambitions for the rest of the campaign, though the forward’s off-ball running and intelligent movement to get into these dangerous positions isn’t given enough credit.

After a deadly goalscoring display here, perhaps he’ll start getting the respect he truly deserves.