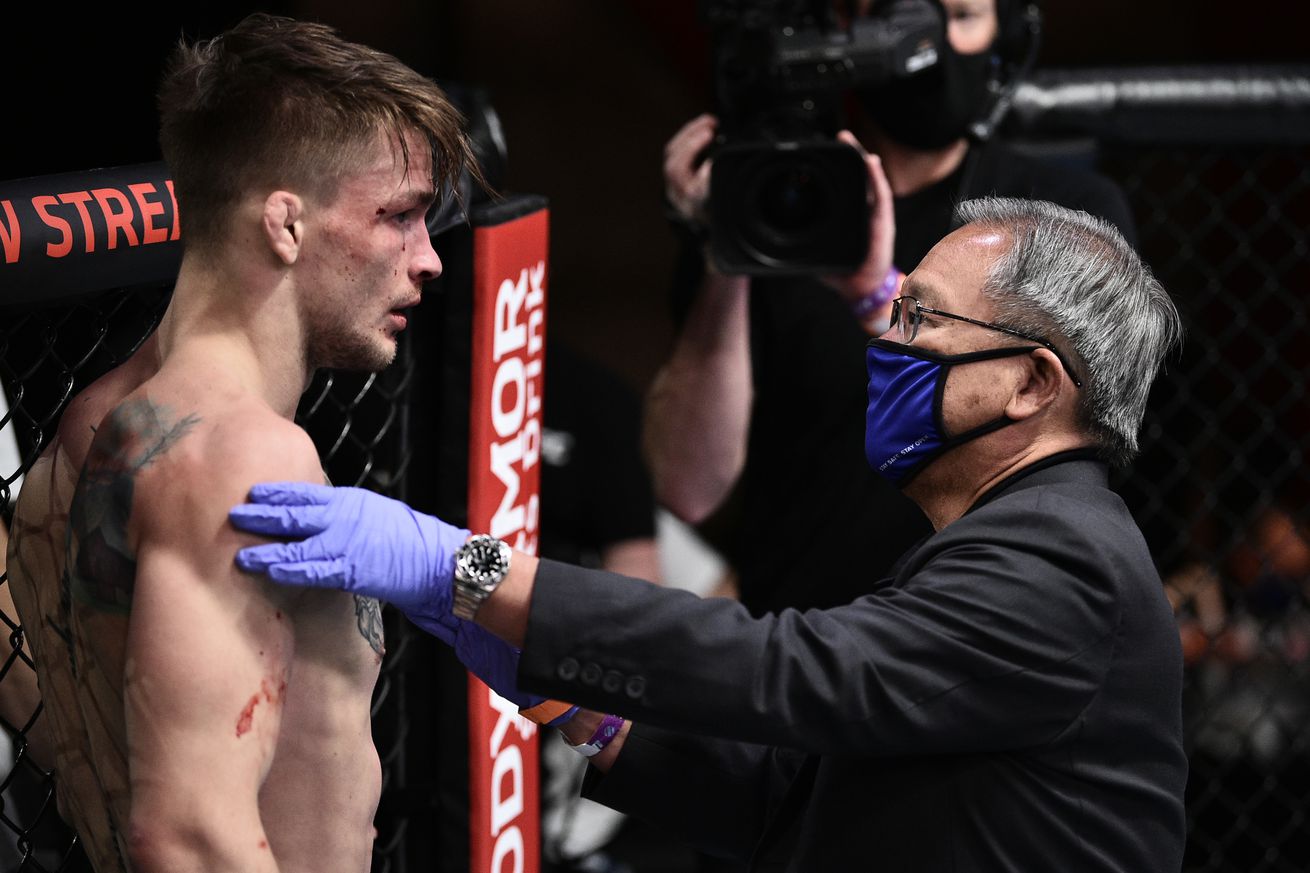 During UFC on ESPN 11 on Saturday, UFC debutant Max Rohskopf made headlines by retiring midway between rounds during his prelim fight vs. Austin Hubbard. After repeatedly telling his corner he didn’t want to continue, their encouraging words were futile: the bout was stopped after the NSAC inspector stepped in.

As I covered in my latest UFC review last weekend, Max Rohskopf’s lightweight debut was marred by controversy after he retired between rounds against Austin Hubbard – despite a concerted effort by his cornermen to encourage him into continuing.

The 25-year-old said, on nine occasions, that he didn’t want to continue and during an interview with MMAFighting.com’s Mike Heck, admitted that he was “pretty close” to listening to his coaches and ultimately sticking out the final five minutes.

It didn’t make for comfortable viewing, either.

Inside the corner of Max Rohskopf before the fight is called off at #UFCVegas3 pic.twitter.com/hZrfnaMObt

During a Skype call with Heck, Rohskopf discussed a range of topics – ranging from his difficult upbringing, to his love for fighting and the last week, where he took the aforementioned bout on six days’ notice.

Hubbard, whose impressive display became little more than an afterthought since, deserves credit for his showing. Especially considering the situation he found himself in, with a negative UFC record heading into this matchup. Max didn’t mince words.

“I think it’s absolutely disgusting that people aren’t talking about Austin and his performance… his back was against the wall. If I went out there and beat him, he would have been 1-3 in the UFC.

Hubbard, originally pencilled in to fight Joe Solecki, admitted he was surprised that Max quit on his stool.

Connecting with 31% of his total strikes (17 of 55) and landing two of six attempted takedowns, he lost the second round 10-8 on each of the three judges’ scorecards. 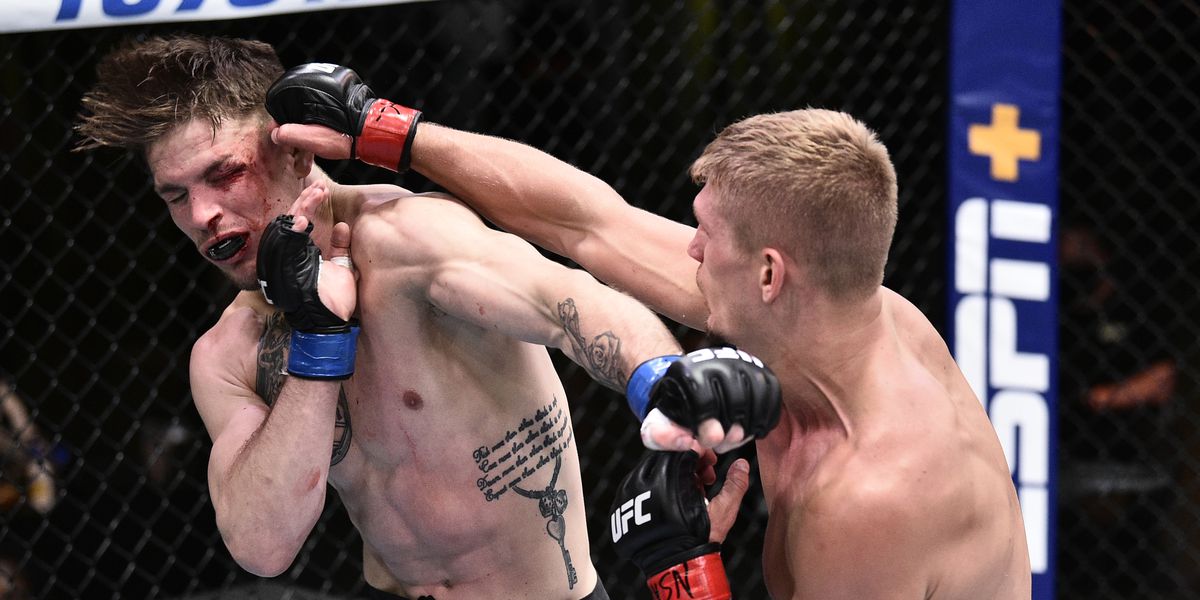 On how he dealt with such a short-notice fight, Max said there were plenty of emotions involved but reaffirmed the belief that no-one was to blame for his defeat but himself.

“I had a lot of emotions, still not been able to process it.. What my manager did [by booking the fight] was 100% spot on, when you’ve been in the sport long enough, you know if someone has the ability and talent to do it.

[My training partners can attest] — I have the skill and ability to do it, I just didn’t show it on Saturday. It’s no-one’s fault that they put me in that situation, except for me. From what I’ve shown in practice, training and all my other fights, I should have been in there but I didn’t prove it.”

He said he had troublesome injuries which limited the amount of training he was capable of doing, but they didn’t affect his overall performance in the Octagon.

In addition, he described the weight cut as the easiest of his life, being someone who “practically lives in the gym”, meaning being out of shape isn’t a problem he encounters.

Cautious, he thought carefully before answering Heck’s questions, perhaps not to make any mistakes – conscious this was an interview after a forgettable performance.

Visibly emotional, he said that while he can deal with getting shark tanked (overwhelmed by multiple partners) in sparring, everything just fell apart last weekend.

“I’ve got a lot of mental problems to fix moving forward. If the commissioner wasn’t there, he [Robert Drysdale] would have got me back [in time for R3]. We wouldn’t be having this conversation.”

Rohskopf had nothing but good things to say about his head coach Drysdale, who has helped him at a time when he needed it most.

“He gave me a place to live, instead of living in my f—ing car. Had nothing to do with MMA until I knocked on his door, asked for his help.

He’s always been there for me, for people to say he was wrong in that situation and there’s no debate or discussion about it?

I’m paying him, at the end of the day, I expect him to do that. I would have done the same if I was cornering for someone else, there’s no discussion about how Rob did the right thing and he’s always done right by me.”

Max called Robert the following day to check in on him, admitting it was a difficult conversation when you consider everything he’d sacrificed to help him get there.

“It was hard because I know he’s put a lot of time and effort into me, he believes in me and I’ve deleted all my social media, I haven’t really seen anything other than one or two things my best friends have sent.

I wanted to make sure he’s alright, he doesn’t deserve that, he deserves praise for helping me get to where I’ve got, trying to do everything he can for someone like me who asked for it without much in return of value.”

Dana White has no filter when it comes to his answers and is a harsh critic when he needs to be, but during the post-fight press conference, defended Max’s decision to quit.

“I haven’t met or talked to him yet so it felt good that he had my back, I don’t know exactly what was said but it’s a nice consolation prize.”

When asked about whether he regrets taking the fight in hindsight, Rohskopf said this:

“No. Like I said earlier, I’ve been a fighter my whole life and every single thing I know, I’ve had to learn the hard way because I’m a f—ing hardhead.

I’m thankful for the UFC giving me the opportunity, Austin and his performance. I actually say this to my kids that I coach, great things don’t happen from easy things. It’s up to me now to take those lessons and put them to use.”

He believes he’ll get another shot in the UFC, but would be okay with not getting another opportunity and venturing to another promotion instead.