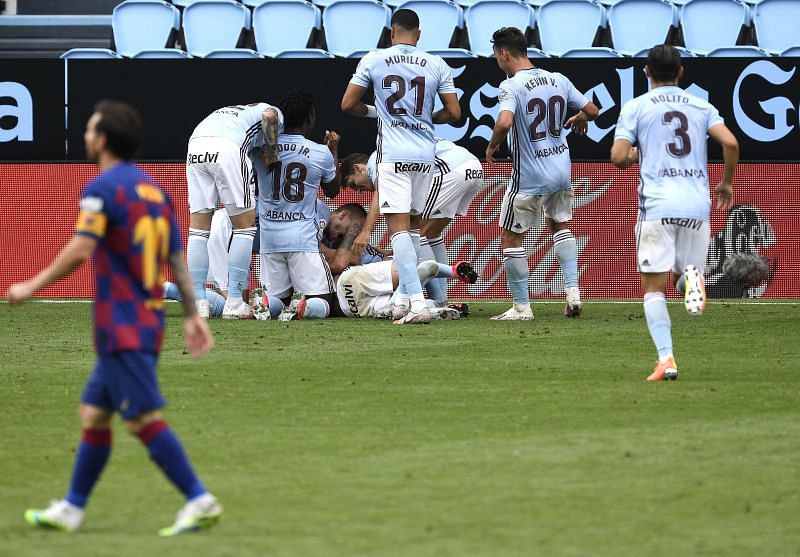 Iago Aspas’ late free-kick strike meant Barcelona were forced to share the spoils against Celta Vigo in a pulsating 2-2 draw with significant ramifications atop La Liga – cancelling out a well-taken Luis Suarez brace at the Municipal de Balaidos.

Barcelona, who started brightly, took the lead after 20 minutes. Moments after Arturo Vidal was halted abruptly on the edge of the box, Lionel Messi curled a chipped pass into Suarez’s path from the resulting free-kick. Unmarked, the Uruguayan couldn’t believe his luck as he instinctively headed home from close-range to open the scoring.

Marc-Andre ter Stegen’s distribution almost got himself into trouble, after a slack attempted pass presented Celta with a golden opportunity to level the scores minutes afterwards.

Gerard Pique made an important block, as Aspas was visibly frustrated with Fedor Smolov’s selfish nature in the final third – which saw the chance ultimately squandered.

Little did Aspas know, that he’d be wheeling away to celebrate a last-gasp equaliser with his teammates over an hour later. The hosts were continuously threatening on the counter-attack, with Kevin Vazquez forcing ter Stegen into an important close-range stop. His outstretched leg proved key, flicking the goalbound strike onto the post.

Then, the Germany international had to deny Aspas’ hopeful effort from a narrow angle as Celta provided another reminder of their ever-present threat in transition. Barcelona though, created ample chances to have more than a one-goal cushion heading into half-time.

Less than five minutes after the restart, their lead had vanished after a mistake in possession was cruelly punished – with help from some questionable defensive positioning.

Ivan Rakitic’s pass was cut out by an alert Brais Mendez, while Samuel Umtiti was caught high up the pitch. Aspas released a defence-splitting pass, which Okay Yokuslu raced onto, before slotting the ball across for Smolov.

He made no mistake from close-range to equalise with a tap-in. Oscar Garcia made a triple substitution on the hour mark, as all three players involved in their equaliser – bar Aspas – were replaced. Shortly afterwards, Suarez completed his brace.

Denis Suarez played himself into trouble on the edge of his own box, Messi picked his pocket and released an intricate pass for the Uruguayan. He let the ball run across his body before firing low into the bottom corner.

ter Stegen had to make a diving stop to deny Nolito after he combined with Aspas in the area, firing low and towards the bottom corner, but a strike clawed away to safety. However, he was helpless to stop the Spaniard’s late free-kick from arrowing into the bottom corner.

Suarez on TV "Obviously we are down, we've dropped points again, very frustrated. We have to hope Madrid drop some points. Both teams have difficult games to play."

Nolito could have been a stoppage-time hero, but directed his goalbound effort into ter Stegen’s grateful gloves as Celta missed the chance to snatch all three points at the death.

The result means Barcelona have now drawn two of their five league fixtures since play resumed earlier this month, presenting Real Madrid with an opportunity to capitalise when they travel to bottom side Espanyol on Sunday evening. 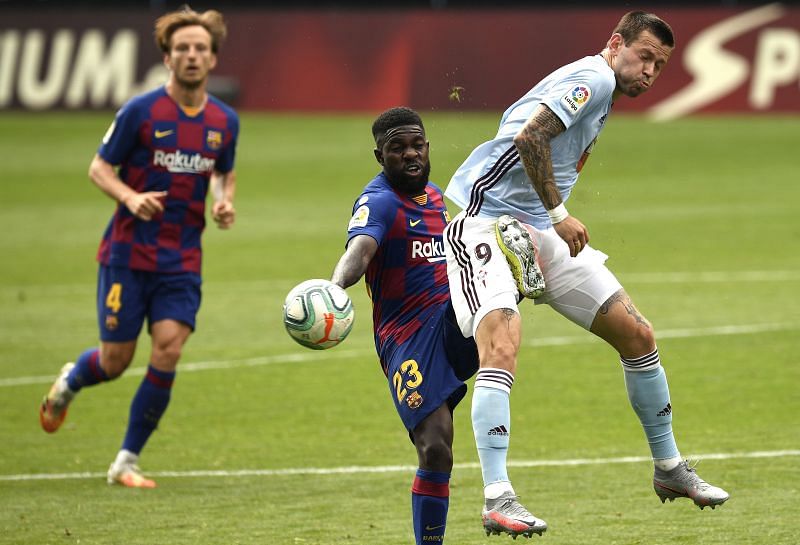 Umtiti endured a frustrating game, where he was tentative and often out of position

It’s fair to say that Umtiti has been a shadow of his former self in recent seasons, as troublesome knee injuries have rather dramatically stalled the World Cup winner’s progress.

Here, he made his first start since play resumed earlier this month and it showed. The centre-back didn’t exude confidence alongside Pique and instead was clearly being targeted in possession as Celta attackers could sense his hesitant nature on-the-ball.

He didn’t want to make any mistakes or take unnecessary risks in the early going. Then, his play shifted to a point where his safer passes increased while holding his position suddenly became an afterthought. That was an unwelcome sight, especially given the hosts’ counter-attacking threat.

For their first goal, he was caught far too high and watched on helplessly as Aspas’ excellent pass floated beyond him. Suddenly, Okay Yokuslu was baring down on goal and he could do nothing to stop them from netting a well-deserved equaliser.

Yet minutes earlier, he made an inch-perfect sliding tackle – stepping in to dispossess Aspas – as Celta created a half-chance with intricate play down the opposite flank.

It’s this type of frustrating inconsistency that has led to many supporters calling for action regarding Umtiti’s future. Sure, he wasn’t solely at fault for Smolov’s goal but had he held his position, the danger probably would have been averted altogether.

It’s moments like these which rather reiterate how he’s dropped down in pecking order as far as central defence is concerned and compatriot Clement Lenglet would have been equally frustrated watching from the substitutes’ bench. 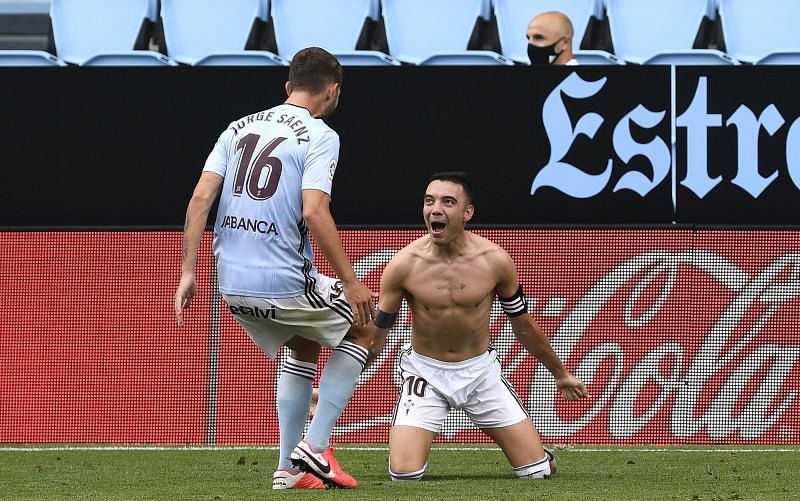 Aspas led by example – with an excellent pass to help equalise, before netting a late leveller too

Initially, this was going to former Barcelona man Denis Suarez. It felt like a concerted effort by the midfielder to prove something against his former teammates, understandably keen to make up for lost time after a forgettable loan spell at Arsenal.

However, as much as his creativity (five successful dribbles, two key passes) and tenacity (five tackles) in midfield was clear, he was also partly at fault for Barcelona’s second goal.

So, captain and last-gasp hero Aspas edges his name into the hit column on this occasion.

Not only did he provide the defence-splitting pass which exposed Umtiti’s needlessly high positioning to help break the deadlock, he unleashed a rocket of his own to equalise late on.

Aspas on TV "We had watched some videos of Barca defending free kicks, and saw that they jumped in the wall, and I thought I could get it around Griezmann."

It ruined match reports everywhere as the 32-year-old continued his impressive goalscoring form this term.

He’s now scored 12 league goals this season, with three in his last three games to boot. Only three La Liga players have more so if Celta are to battle their way towards a respectable finish, they need Aspas to maintain such fine form going forward. 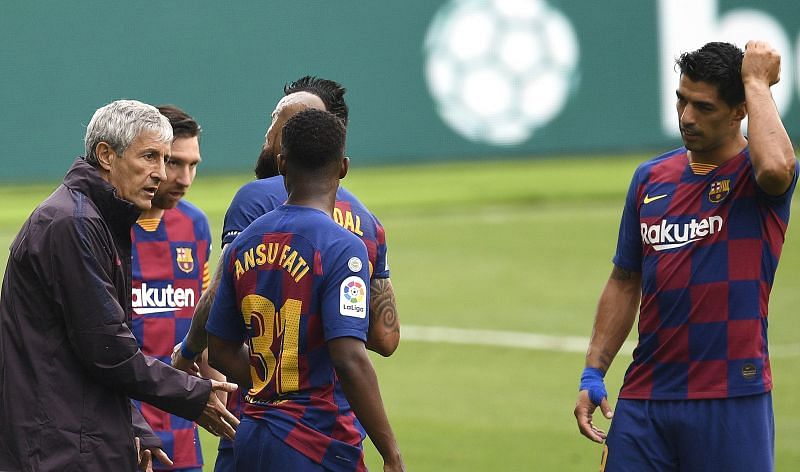 Fati was frustrated vs. Celta, as Aidoo did a great job to constantly isolate him throughout

There’s a reason why Quique Setien called for greater consistency from Ansu Fati immediately after his encouraging display against Leganes on June 16: the teenage winger mixes moments of individual brilliance with frustrating decision-making too often.

It’s easy to forget he’s still just 17, yet while Antoine Griezmann and Martin Braithwaite are left toiling on the substitutes’ bench, Fati failed to impress here against a Celta Vigo backline that seemed prepared for his trickery and invention in the final third.

He won just three of 11 duels, lost possession ten times and was dribbled past on two occasions before being replaced by Braithwaite with 20 minutes to play. Effectively marshalled by an overtly physical Joseph Aidoo throughout, the youngster was persistent but didn’t do enough to earn a similar reward like the one against Leganes.

There, he broke the deadlock just before half-time with a drilled effort into the bottom corner. Here? Messi teed him up with a nicely-weighted intricate pass in the box, which he scuffed from close-range.

It rather summed up a frustrating outing from a youngster with world-class potential, who still has plenty of work to do before he justifies his standing as a Barcelona regular going forward. 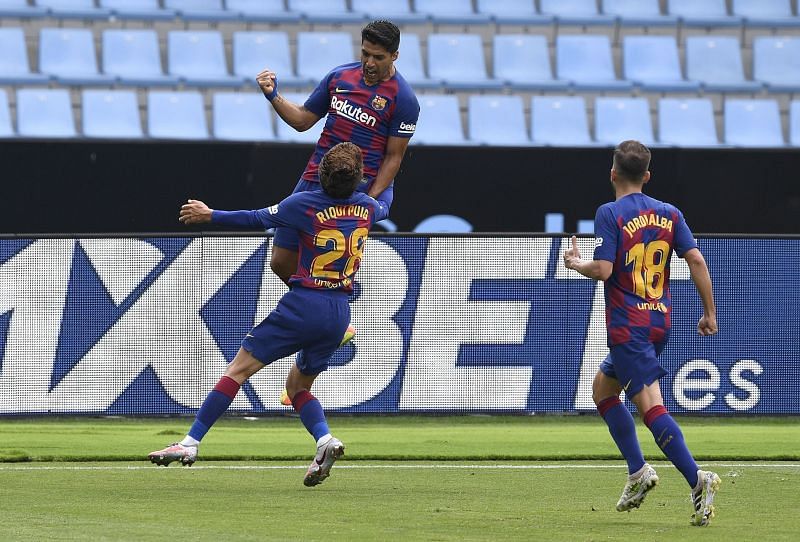 Suarez scored two well-taken strikes for Barcelona, one either side of half-time

The best forwards can score without having a particularly standout game and again, Barcelona’s Luis Suarez provided the finishing touch on this occasion. He’s understandably frustrated with the end result though, which virtually undid all of his hard work on an afternoon where Barcelona could have easily emerged victorious.

His first strike was delivered on a plate by Messi, whose free-kick was lofted into the box and Celta were duly punished for slack man-marking. Left unmarked, although he hasn’t particularly shone in recent performances since play resumed earlier this month, he was never going to miss from there.

He looks fitter and more determined than he has done at times in recent years, which is a welcome sight for supporters.

It was rather evidenced by his continuous tussles with Nestor Araujo, who was booked and Suarez will argue probably should have been sent off for his persistently harsh treatment when challenging the Barcelona man in possession.

He knew, as well as most do, that he had to adopt such physical tactics to try and frustrate Suarez. Instead though, it only motivated him to slam home a razor-sharp second before being replaced by Griezmann with little over ten minutes to play. 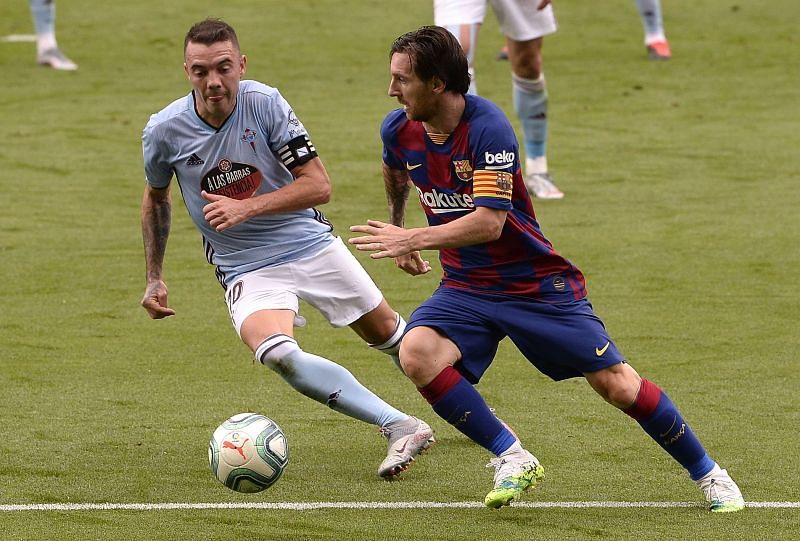 Messi regularly sprung into life and although he didn’t score, created chances galore

If Suarez feels frustrated by this result, then Barcelona captain Messi will be livid. They let their lead slip, not once but twice, and although he faded at times in the second-half, Messi also created chances galore that his Barcelona teammates should have done better to finish.

In the first-half alone, his inviting corner-kick deliveries saw Pique head an effort onto the post, before Celta goalkeeper Ruben Blanco fumbled his lines as Barcelona probed.

He produced defence-splitting passes twice for an overlapping Nelson Semedo, which were ultimately wasted as the hosts cleared their lines under pressure. Messi also teed up Fati in the area, which was skewed wide, while setting up Suarez twice to complete his brace.

The first assist felt like one practiced on the training ground, as he deftly chipped into the Celta area and watched Suarez head home.

It was too simplistic, yet the second one seemed more important at the time – pinching the ball from Denis Suarez on the edge of the area and instinctively feeding his strike partner again, this time to slam home with aplomb.

Five key passes, four successful dribbles, three big chances created, eight of 12 duels won and two assists… Messi was Barcelona’s best player again and ultimately has little to show for it. Displays like these emphasise their over-reliance on him, which is certainly worrying.