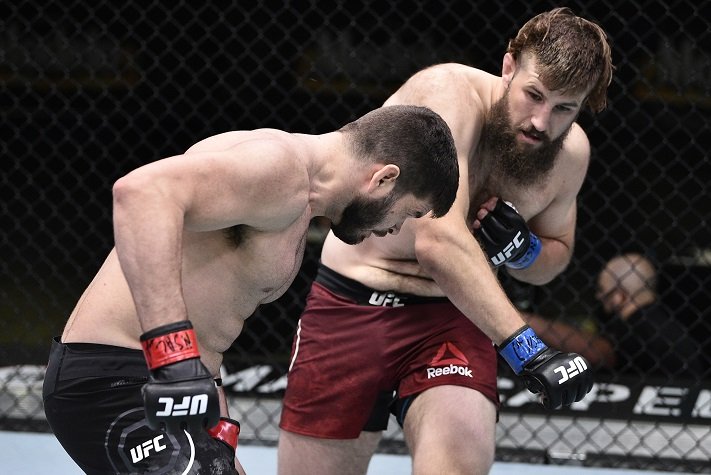 Just before the Poirier-Hooker main card began, there were interesting prelim fights on display: including statement victories for heavyweight Tanner Boser and an impressive submission win by 20-year-old strawweight debutant Kay Hansen.

For a detailed review of this fantastic evening’s main card, click here…

In the final prelim, lightweight Kharma Worthy extended his win streak to seven (16-6) after earning a R3 submission victory against an oversized opponent in Luis Pena.

Pena, 6’3 with a four-inch advantage, was the betting favourite but quickly found himself in a tactical battle of styles with southpaw Worthy.

Kharma started R1 by landing a number of leg kicks and appeared heavy-handed with his punches too, as Pena struggled getting to grips with their stylistic matchup in the stand-up exchange.

His corner urged him to be more aggressive and that paid off in R2, as he completed a nicely-timed takedown early to start the round. Despite Worthy’s defensive efforts, Pena locked in a body triangle and looked comfortable controlling the fight on the ground.

With the scores seemingly level going into R3, Pena decided to continue focusing on his ground game.

However, his takedown attempts were well stuffed by an alert Worthy, who did better to shrug him off before shifting momentum with a submission of his own.

As their bodies were up against the cage, the 33-year-old took the opportunity to apply a modified guillotine choke on Pena’s neck moments after landing two elbow strikes.

He tightened his grip and within seconds, Pena’s ground game approach hadn’t just been completely nullified – it was used to submit him, for the first time in his MMA career.

Afterwards, Worthy praised Pena’s toughness before shouting out his Pennsylvania-based fighting teammates that are equally itching for an opportunity in the UFC.

“I feel good, he was tough, that’s exactly why I said I wanted to fight him: he’s a hard man to deal with, but so am I!

I’ve got that dad strength, turn 34 in October so it’s a different story with me… I’m willing to die in here, you’re going to have to put me out.”

Canada’s Tanner Boser improved to 18-6-1 after connecting with a blistering punch combo knocking Philipe Lins (14-5) unconscious during R1 of their heavyweight scrap.

Billed as a slight underdog here, the 28-year-old looked in better shape than recent fights and got to work in what was billed a closely-contested bout. It proved anything but.

He landed eight kicks early as the pair sussed each other out, with feints and regular movement. Lins tagged Boser with a body shot while continuing to venture forward.

As Boser said in the post-fight interview, that proved the Brazilian’s downfall here. He was regularly swinging to try and connect with an overhand right, which eventually arrived with a relentless punch flurry to finish.

Those fast hands connecting meant Boser didn’t know what hit him and referee Herb Dean had to throw the Canadian off him, as he crumbled to the canvas.

“I feel great, the win bonus is awesome, my first UFC knockout is wicked. My adrenaline is still high… did a lot of strength and conditioning – came in over 10lbs lighter than my previous fight, so glad that it paid off.

I’m not one of the super powerful heavyweights, fast and precise. The gameplan worked: leg kicks made him want to charge in more, when he did, I made him pay for it.”

On who he wants next:

“I’m not hurt at all, throw me on Fight Island and if Maurice Greene beats Gian Villante [which he did]… he turned me down in August, wanted a top-15 guy and got smoked by Sergei Pavlovich (14-1).

He told me at the pool a few days ago, a couple of beers deep, he’d be ready for Fight Island. You can’t duck me now, I’m calling you out.” 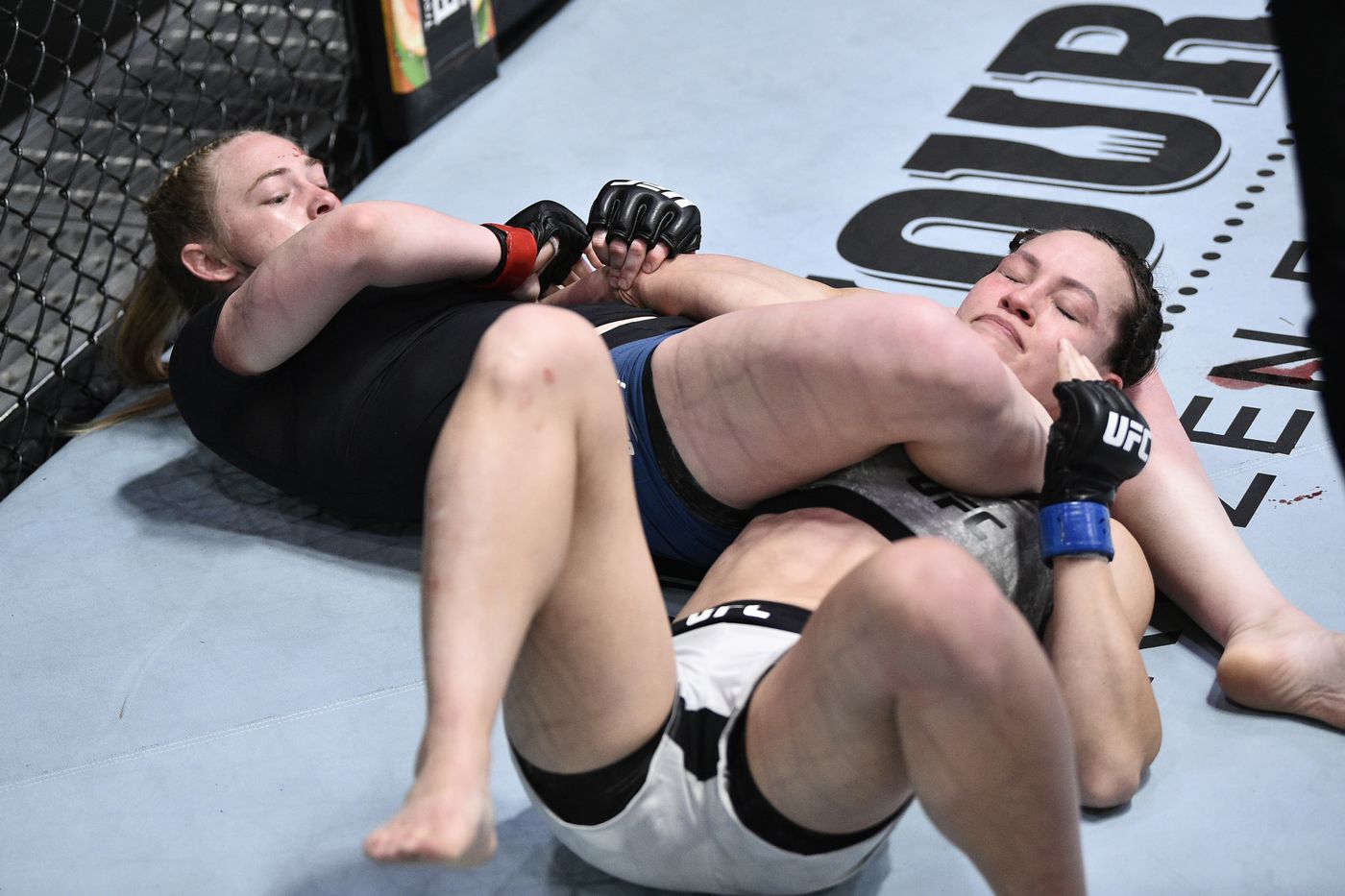 Despite a tentative start, Hansen was victorious with a R3 armbar on her UFC debut

On less than a week’s notice, Kay Hansen made her UFC debut a triumphant one, as the 20-year-old strawweight beat Jinh Yu Frey (9-4) with an impressive armbar submission.

With a 15-year age difference between the pair, Hansen was contacted and accepted the fight last Sunday – giving her little time to prepare for her company debut.

After a tentative first round, where Frey landed a handful of stinging strikes which were absorbed well, Hansen had her takedown attempt emphatically stuffed before Frey landed a bruising leg kick to separate them in a clinch.

Despite Frey’s fast hands, Hansen completed an early takedown in R2. Despite not being very active initially on the ground, she undoubtedly controlled the round without inflicting significant amounts of damage from ground-and-pound strikes.

With the scores seemingly level at a round apiece, it was finely poised heading into R3. Frey displayed her takedown defence in the early stages, though it ultimately proved futile as Hansen’s pressure proved too much for the 35-year-old to handle.

After throwing her to the ground, she alternated between an armbar attempt and triangle lock before completing a tightly-squeezed armbar. With almost half the final round to work with, Frey had no choice but to tap.

Afterwards, the youngest female fighter had this to say after her debut victory:

“I know she was experienced going into this, had to be patient and I know all I need is one takedown. I had to work hard for it, but that wasn’t a surprise.” 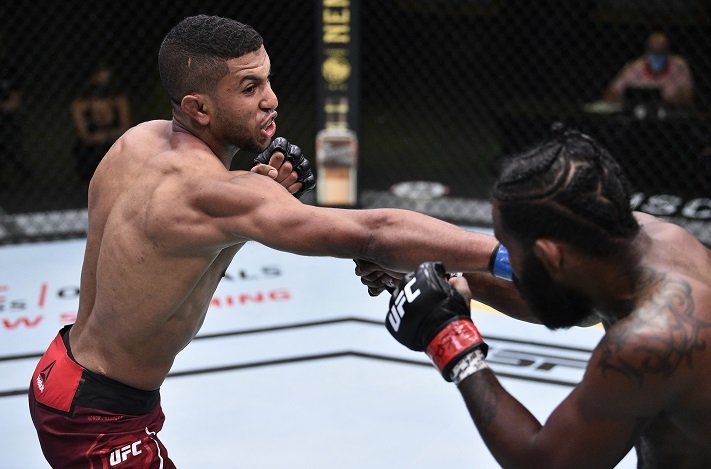 Zalal defended well, was dominant in stand-up exchanges and earned a hard-fought win

In the night’s first prelim, Youssef Zalal won by UD (29-28 on all judges’ scorecards) in a gritty 15 minutes against an experienced opponent in Jordan Griffin, who falls to 18-8.

During an interesting featherweight bout, the 23-year-old displayed good footwork to evade Griffin’s early advances in R1 – though it wasn’t long before the 30-year-old American sunk his claws into the Moroccan Devil, shooting for takedowns.

Griffin locked his leg in, creating potential trouble as he patiently waited for a mistake to open up a submission finish opportunity.

It didn’t arrive and instead, Zalal respondeed with a punch combination and flying knee after they returned to the feet.

Griffin persisted trying to nullify Zalal’s kickboxing background by grounding him with another takedown late in R1, which would come back to bite him early in the next round.

Youssef was more aggressive to start R2, landing a flying knee after Griffin attempted a flurry of acrobatic kicks to push his opponent back towards the cage.

You could see Griffin was visibly in pain as Zalal connected with a brilliant right-hand boy shot, yet managed to recover on the ground with a smart reversal into a body lock.

Griffin reverted back to what he knows: frustrating Zalal with more ground game, having been rocked by a few stinging jabs.

Griffin was tired yet continued his choke attempts, though Zalal was dominant in stand-up exchanges and defended submissions too, embracing the continuous pressure well.

The talented youngster was in reflective mood when speaking to Jon Anik post-fight:

“Every time I come in here, I’m not very happy with my performance. He’s a tough guy, double my experience but was 18-7, fought nothing but the best: top-ranked featherweights.

For me, it’s all experience. I definitely want to go [again] in August, see what the UFC has for me. I’m learning, still young, we [me and my team] have the recipe to be a world champion. Very happy, excited to learn and get better.”