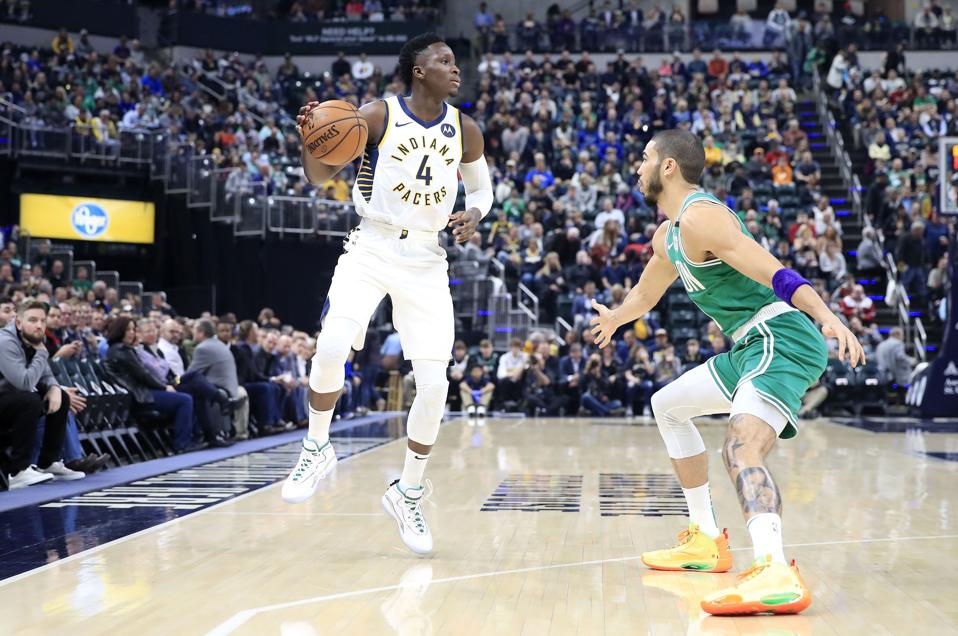 Pacers’ All-Star Victor Oladipo has taken the difficult decision to sit out of this summer’s resumed NBA season in Orlando later this month. The 28-year-old guard confirmed he’ll travel with the team but take time to prepare for 2020-21, having played just 13 games after returning from a serious ACL injury this year.

In a big blow to the Indiana Pacers’ hopes of postseason success this term, their All-Star guard Oladipo has confirmed he will sit out of the resumed campaign once it gets underway later this month.

As quoted by The Athletic, he said:

“I really want to play, and as a competitor and teammate this is tearing me apart. I feel like I’m at a great place in my rehab and getting closer to 100%.

With all the variables, from how I have to build my 5-on-5 workload back up, to the increased risk of a soft tissue injury which could delay rehab, and the unknown exact set up of the bubble, I just can’t get my mind to being fully comfortable in playing.”

Fellow guard Jeremy Lamb (knee) is also sidelined, as part of a Pacers team (39-26) that are the no.5 seed in the Eastern Conference.

They are slated play the Philadelphia 76ers on Aug. 1, in their return game in Orlando.

He was just beginning to get into his scoring groove again when the season was suspended on March 12, after Rudy Gobert tested positive for the coronavirus.

After making his long-awaited return against the Bulls on January 29, he endured an understandably slow shooting start – 18-of-64 (28% FG) from the field after five games.

However, he was steadily improving and recorded a season-high 27 points alongside four assists and seven rebounds in their narrow defeat by Boston on March 10.

Oladipo’s scoring (9-of-16, five threes) made it a tough road win for Eastern rivals Boston

That proved the Pacers’ final game before the season’s sudden suspension.

Indiana’s president of basketball operations Kevin Pritchard delivered a statement on the news, saying they collectively “respect and understand” Victor’s decision to opt out.

During an interview with The Athletic’s Shams Charania, Oladipo explained his choice – which is understandable given his long injury lay-off and the risks involved.

Victor Oladipo: “As a competitor and teammate this is tearing me apart … but I truly believe continuing on the course I’m on and getting fully healthy for the 2020-21 season is the right decision for me.”

As I reported back in early May, Oladipo will have just one year left to run on his four-year, $85m contract once the 2019-20 NBA season is eventually concluded.

Although contract talks between the two parties reached an impasse before this current campaign begun, Victor’s choice to sit out makes sense from a personal standpoint.

He stands to earn more money long-term, provided he returns to the All-Star form which saw him propel Indiana into a conversation as dark horses in the Eastern Conference.

A lot has been said about a stacked free agency class of 2021, yet Oladipo is the most intriguing guard on that list of available star players.

Indiana’s East rivals Miami have been linked with him, so sustaining another long-term injury at this stage of his career – entering his peak years – would be disastrous.