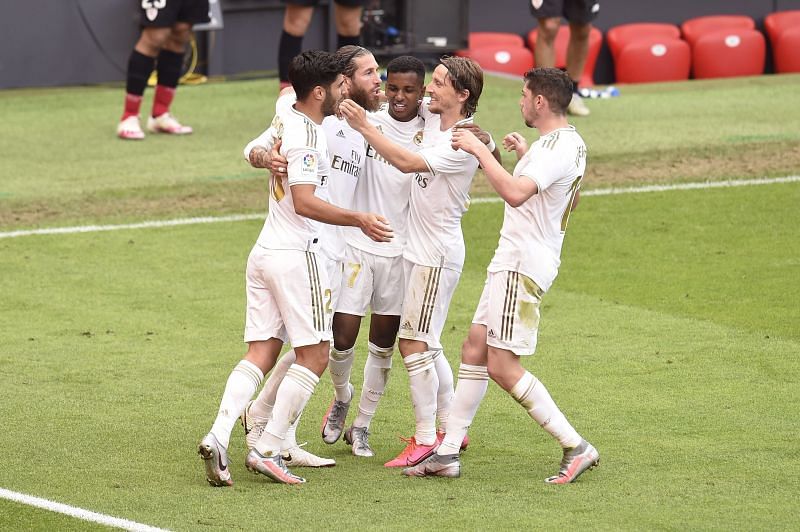 Real Madrid extended their La Liga lead to seven points with a gritty 1-0 away win over Athletic Bilbao, courtesy of Sergio Ramos’ second-half penalty. Which players impressed, while others struggled at San Mames in the day’s early kick-off?

Sergio Ramos had a three-minute wait, but there was a sense of inevitability as he bided his time before taking the spot-kick.

The captain, who’ll miss their next game against Alaves through suspension, scored his tenth league goal of the campaign from the spot after Marcelo was fouled by Dani Garcia.

Real prevail in another slender victory

Although the contact was minimal, VAR review saw referee Jose Gonzalez point to the spot, at a time where Los Blancos were cranking up the pressure in pursuit of an all-important opener.

The clear goalscoring opportunities for both sides were few and far between, though you could tell that this was an early kick-off. Real Madrid began in lethargic fashion and could have been behind at half-time, as Inaki Williams and Raul Garcia both came close.

Real’s attacks were largely going through Marcelo and Marco Asensio down the left, though they had Eder Militao to thank after some sloppy defending by captain Ramos.

Things had to improve and they did, as Zinedine Zidane’s side went to work on creating more chances after the break, making it more difficult for Bilbao to defend against.

As Gonzalez signalled for VAR intervention, the Athletic Bilbao players instinctively knew. Their protests, while justified, were futile. Real have now won three successive games by a one-goal scoreline – two of those have been settled by Ramos penalties.

They won’t be complaining, especially with a seven-point lead to title rivals Barcelona, who travel to face Villarreal in tonight’s evening fixture.

Without further ado, here’s a look at five hits and flops as Real Madrid edge ever closer to clinching only their second La Liga title since the 2011-12 campaign: 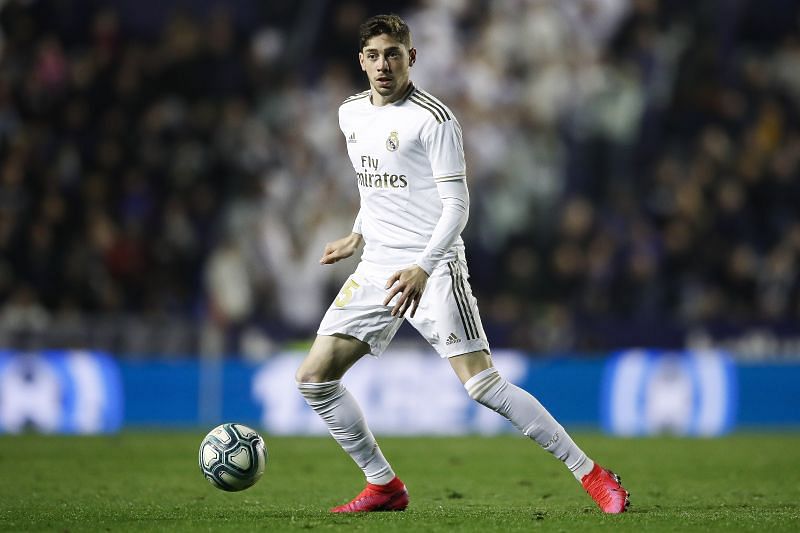 I could have gone for Inaki Williams or Karim Benzema to an extent with this pick, though both were useful in different ways – Federico Valverde just wasn’t, unfortunately.

I didn’t notice he was on the pitch for large periods, which isn’t exactly a good thing to say in tightly-contested games like these. Tidy in possession as he usually is, he wasn’t nearly as busy as Luka Modric or Casemiro as part of Real’s midfield trio and it showed.

The TV cameras regularly panned to a presumably rested Toni Kroos watching on from the stands, where he remained until the final few minutes.

It speaks volumes that the German playmaker was more involved in ten-odd minutes than the young Uruguayan over the whole game.

It’s too easy to justify passive displays like this from Valverde, who hasn’t really asserted his ability on games since mid-February. With competition for places high, he can’t really afford to coast through matches for much longer. 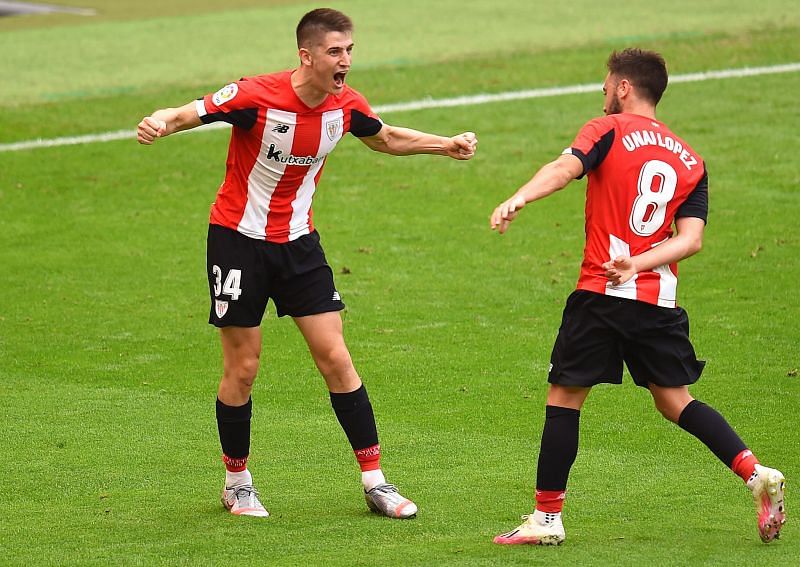 Lopez (no.8) in happier times vs. Mallorca last month – the midfielder was impressive here

Bilbao were disciplined, determined and gave Real Madrid a good run for their money on this occasion – though their hard work was all undone after 70 minutes as Marcelo was penalised by Unai Lopez’s midfield partner Dani García.

It was an unfortunate sequence which resulted in the collision, and although García didn’t exactly flatten Marcelo in his attempts to beat him to the ball, there was enough contact to warrant a penalty.

Compared with García and most of his teammates, Lopez shone and was comfortably their best player here.

Replaced by midfielder Mikel Vesga shortly before the penalty incident, it felt fitting that he wasn’t on the pitch to witness or play a part in Real’s winning goal.

However, the 24-year-old did more than enough not to find himself on the losing side and will be quietly bemoaning Bilbao’s profligacy when it mattered most.

After all, he created a joint game-high two key passes, retained possession well (94.3%, 33 pass completed), won six of 11 duels and relished keeping Real Madrid players at bay for sustained periods by any means necessary. He completed three tackles, two interceptions and one successful dribble, as well as committing four fouls without being booked! 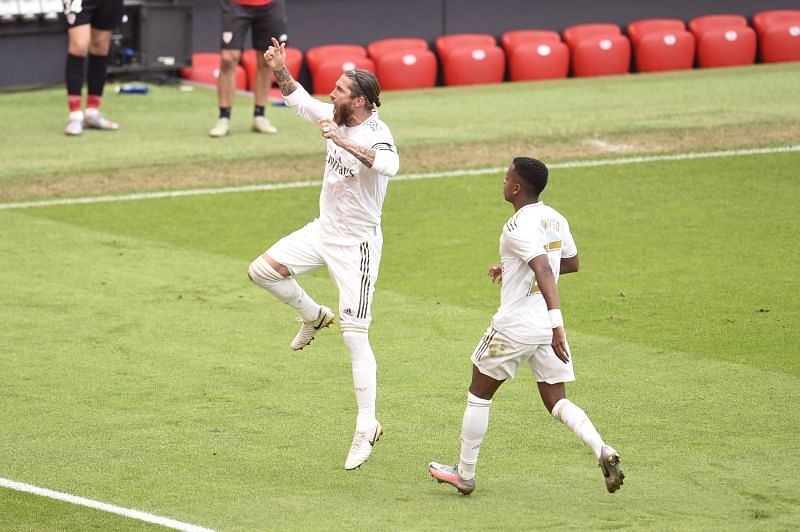 Rodrygo celebrates with Ramos after his winner, just before the Brazilian was replaced

This was only the Brazilian’s second league start since late January, and as the match wore on, you could see he was increasingly struggling – despite flashes of the technical brilliance that have wowed Real Madrid supporters at times this season.

It’s easy to forget the winger’s still only 19, though he’s a year younger than Vinicius Junior, who came on with 15 minutes to play as if he too had a point to prove.

This is a critical point in the pair’s development, not least with such fierce competition for places, though Rodrygo was largely underwhelming here.

He got into encouraging positions but crucially failed to take advantage: under pressure from onrushing goalkeeper Unai Simon on one occasion, having a low cross cleared to safety in a promising area and heading Real Madrid’s best chance of the first-half wide.

Marcelo-Asensio combined down the left again, before Asensio fizzed a dangerous ball into the box. Inigo Martinez missed his attempted clearance, though he was fortunate to see Rodrygo fluff his lines from close-range.

Gareth Bale has only started once since last month’s restart, while there are multiple other forwards targeting an extended opportunity to impress under Zidane.

This display will not have provided the Frenchman with increased confidence in Rodrygo’s abilities to prove an important catalyst in tight fixtures. 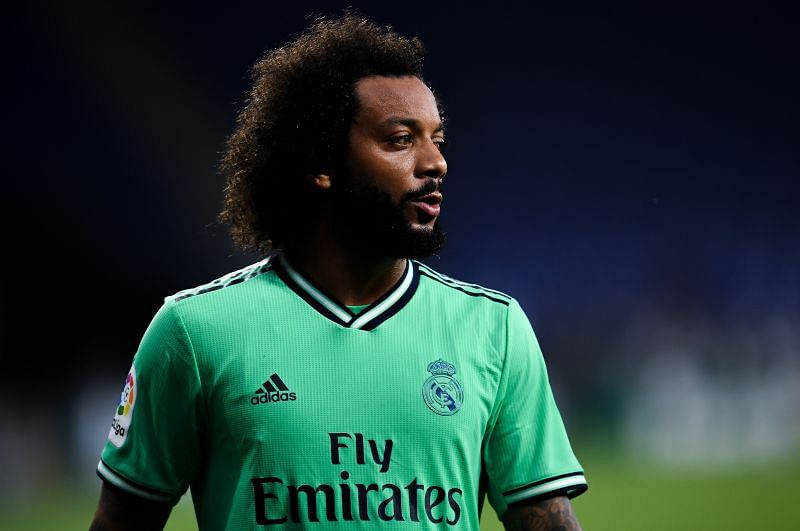 Marcelo combined well with Asensio throughout, was steady and also created their winner

After watching on from the substitutes’ bench during Real Madrid’s 1-0 win over Getafe on Thursday, Marcelo was recalled to the starting line-up and didn’t disappoint here. His combination play down the left-hand side with Asensio proved an integral part of the visitors’ attacking threat, especially in the first-half when most teammates started slowly.

Although he relishes flying forward more than he does one-on-one defending, it comes at a cost. At times, his high starting position meant he was caught out or bypassed (dribbled past twice) by a combination of Unai Lopez, captain Iker Muniain and Inaki Williams.

However, one of his teammates often came to his rescue and it wasn’t exactly captain Ramos either. More on that defensive display later. But Marcelo repaid that support from his teammates by flourishing in the opposition box.

A constant pest in the final third, overlapping runs caused Bilbao players to make a decision: either track his movement or isolate Asensio, they couldn’t do both effectively. So that persistence to continue probing and providing width, even at times when it wasn’t working, paid off after 70 minutes.

He raced to a loose ball and got there quickly to draw a foul from Dani Garcia, initially looking like an honest 50-50 though replays showed a penalty was the right decision. Ramos stepped up and made no mistake, despite a three-minute wait to take it, but the plaudits should go to Marcelo for creating that opportunity to begin with. Speaking of… 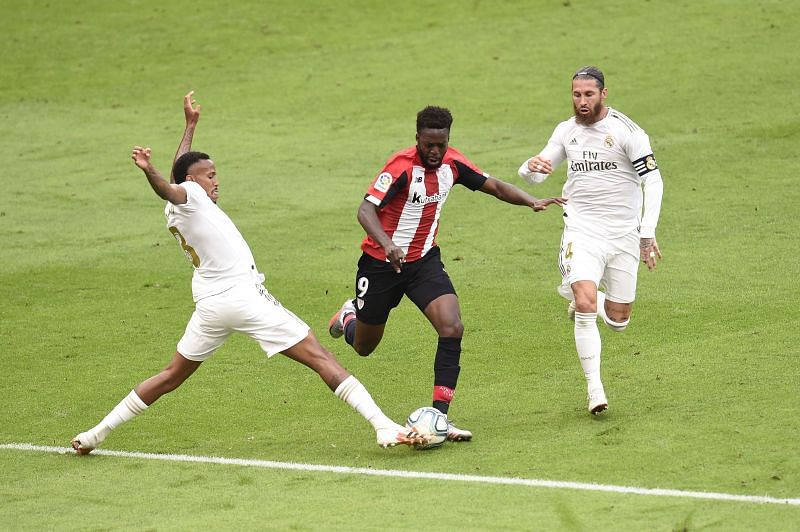 Militao was excellent defensively against Inaki, who was an ever-present threat and beat Ramos

I could have easily gone with the safe option and picked matchwinner Sergio Ramos as Man of the Match here. He’s onto double figures for goals this season and continues to lead by example when his team need him most.

However defensively, the veteran was outshone by a young Brazilian twelve years younger and Militao’s display proved quietly important in helping them keep a clean sheet here.

The way he handled Inaki Williams, Bilbao’s ever-present threat, was admirable to say the least. Ramos – who has played every minute since the restart – looked leggy and a step slow at times. It’s evidenced by statistics: he won just one of seven duels contested here.

Militao by contrast, won seven of nine over the 90 minutes. He showed his turn of pace and spatial awareness to both keep pace with, and dispossess Inaki on a few separate occasions where the Spaniard looked threatening, baring down on goal.

Making three clearances, two tackles and recording 88.2% possession, this was his best performance since mid-January and it needed to be.

Real Madrid were far from perfect, yet have recorded four successsive clean sheets and this display reinforces the fact that Raphael Varane (neck) has a worthy long-term partner when Ramos does eventually depart.