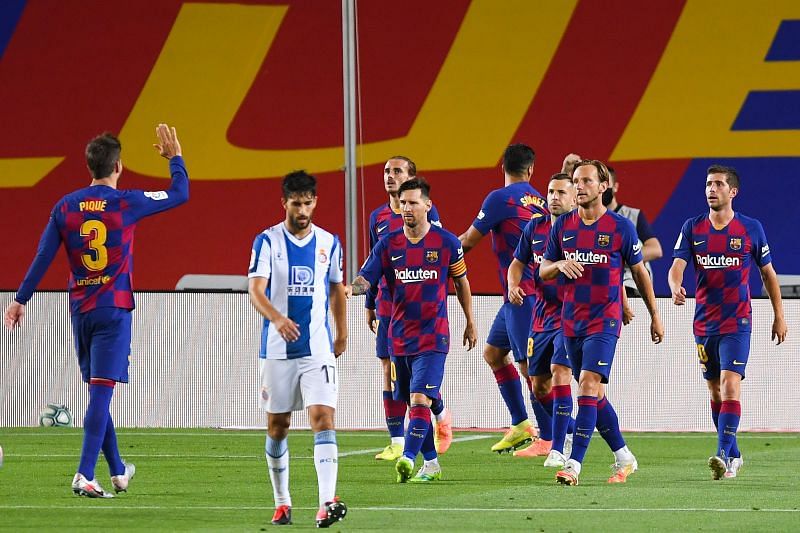 Far from perfect, Barcelona’s title hopes remain intact after Luis Suarez’s 15th La Liga goal of the season – now their third highest goalscorer in club history – settled a drab affair against city rivals Espanyol at the Camp Nou. Who impressed while others struggled?

The lowdown as Suarez sinks Espanyol to second tier

The Uruguayan’s close-range finish means Espanyol are mathematically relegated to Spain’s second-tier ahead of the 2020-21 campaign, while closing the gap on Real Madrid back to one point. Zinedine Zidane’s men return to action on Friday against Alaves.

It wasn’t a game packed with many goalscoring opportunities, though Francisco Rufete’s side could have easily been 2-0 up before half-time.

Adrian Embarba forced Marc-Andre ter Stegen into a reflex save at his near post, after catching the hosts on the counter-attack.

Just a few minutes before the break, fullback Didac Vila hit the post. He initially fizzed the ball across Barca’s six-yard box, with Clement Lenglet clearing his lines under pressure.

Inadvertently, the Frenchman forced ter Stegen into a point-blank stop as he turned the effort goalwards.

The ball fell to Vila, who could only watch as his strike cannoned off the far post and out for a goal-kick. It rather typified a frustrating first-half for the visitors.

The second-half began with Quique Setien making a tactical change as Ansu Fati replaced Nelson Semedo. Less than five minutes later, the hosts were down to ten men.

He wasn’t the only player to be dismissed, as Pol Lozano – making the first La Liga start of his career – was also given his marching orders just three minutes later.

Punished for a similarly high tackle, he lunged in late on Gerard Pique and VAR intervened as the referee changed his original decision. Both sides were suddenly down to ten men, though the hosts broke the deadlock minutes later.

Antoine Griezmann headed wide from a promising chance, but proved pivotal during the build-up to their well-taken opener: albeit a harsh goal from Espanyol’s perspective.

He teed up Lionel Messi inside the box with a deft backheel flick, though the captain’s effort was blocked by an alert Leandro Cabrera.

Unfortunately for him, the ball fell invitingly for Suarez, who was on hand to cooly slot home past Diego Lopez from close-range.

It was a landmark strike for the 33-year-old, who has now overtaken Hungary’s Laszlo Kubala (1950-61) on Barca’s all-time scorers list with 195 goals.

It should have sparked the game into life.

Instead, with tired players and more ground to cover Setien’s men didn’t add to their lead. Both sides had half-chances as the game wore on and respective substitutes tried to make their impact felt, though Espanyol were unfortunate not to have at least scored.

Without further ado, here’s a look at five hits and flops from Barca’s gritty victory: 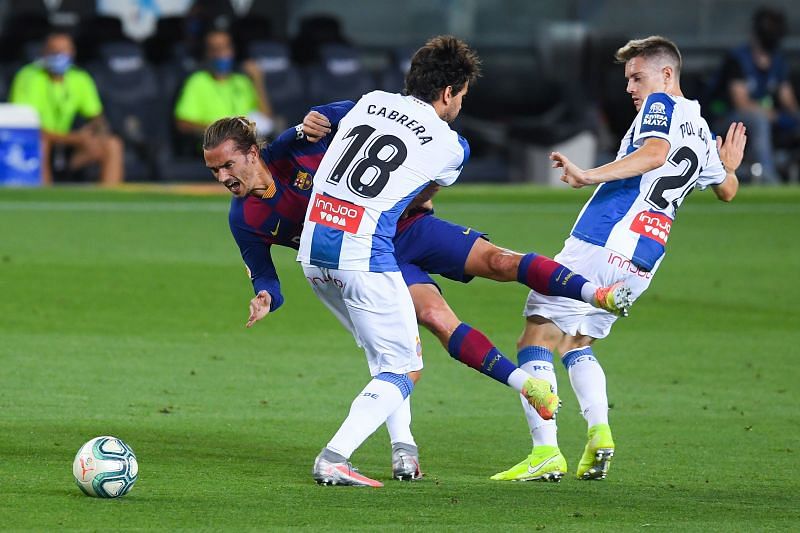 Lozano (far right, no.26) flattered to deceive against Barca before his second-half sending off

Making his first La Liga start at the Camp Nou, this was always going to be a tricky outing for Spain under-21 international Pol Lozano. Espanyol started brightly here and were up for the fight against their city rivals, delivering a disciplined display out of possession while showing tenacity in the tackle and attacking in numbers with the ball.

He won just one of six contested before his second-half red card, having committed four fouls and completing one tackle in that time.

Especially after seeing Fati, three years younger than him, suffer the same fate after VAR review just minutes earlier, the 20-year-old should have shown more situational awareness and caution before flying into a challenge with the long-limbed Pique – which he never seemed confident enough to win cleanly.

His abrupt dismissal put Espanyol on the back foot, reversing their initial numerical advantage and just minutes later, the deadlock was broken.

Having impressed with a few memorable cameo appearances against Real Madrid and their Europa League win over Wolves in late February, his talent isn’t an issue. Tackling and the ability to be more studious in situations like these though, certainly needs work. 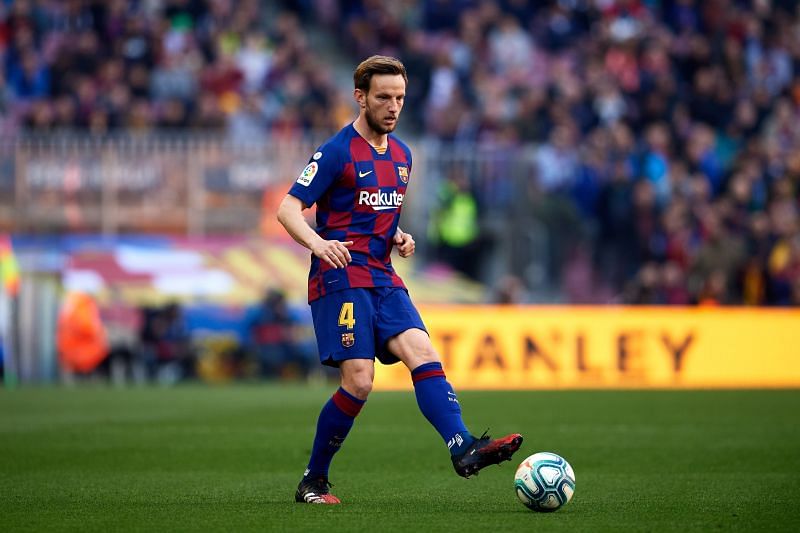 Rakitic was composed in possession, dependable and didn’t shy away from responsibility either

While Sergio Busquets’ decline is noticeable, both in decision-making and his defensive abilities, the Spaniard has an experienced partner in Rakitic who has become increasingly accustomed to performing a similar job with confidence recently.

Operating on the left-hand side of their midfield trio, only Jordi Alba (136) had more touches than the Croatia international (121).

He kept possession well (93.6% success on 102 passes), won five of eight duels and did just as much defensively compared with Busquets.

Many critics have suggested he’s too ponderous in possession and doesn’t venture forward as often as he previously did at Sevilla, but one thing that cannot be disputed is that his presence provides a sense of balance often left underappreciated.

Late on, ter Stegen felt comfortable enough to fizz a 30-yard pass across the turf into his path with an Espanyol player lurking near him.

He not only beat the player to the ball with a timely sliding intervention, but progressed forward with a half-chance which ultimately went unrewarded. It’s moments like these which really accentuate his individual qualities. 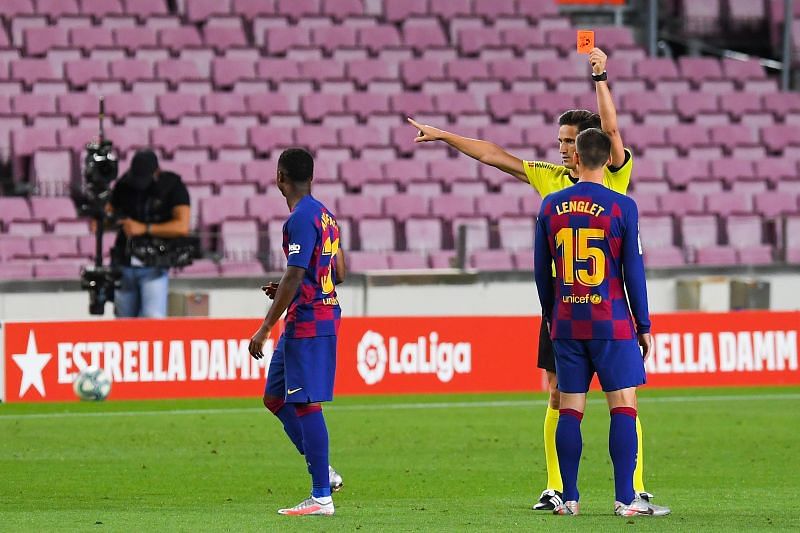 Fati reacts in disbelief after being sent off just five minutes into the second-half vs. Espanyol

Perhaps this is harsh, but a memorable learning curve in Ansu Fati’s young and fairly inexperienced career to date.

As I’ve said before, it’s easy to forget he’s still only 17-years-old and experiences like this will only fuel the fire within him to prove critics wrong while taking his opportunities when he gets them.

Questions over whether Quique Setien should have given him more prior warning before calling for him to come on as a half-time substitute are immaterial.

With the pitch being stretched and Espanyol’s backline tiring by the minute, the winger had so much opportunity to create chances galore. Within five minutes, he was instead trudging down the tunnel in disbelief.

That’s why he earns a rather forgettable place on this list here: not that he was challenging for possession and mistimed his tackle, which he did and could have no complaints about.

But instead because his introduction was so short-lived, his sending off ruined Barcelona’s momentum at a time where they needed a dependable injection of creativity.

Had Suarez not scored when he did, this could have been a completely different game. You could say the same thing about Lozano’s dismissal shortly beforehand – but Fati let his teammates down, whether he attempted to play the ball or not.

Now, he faces a three-match ban and unless they appeal the decision and are successful in having his suspension lowered, is set to miss the remainder of this La Liga campaign. 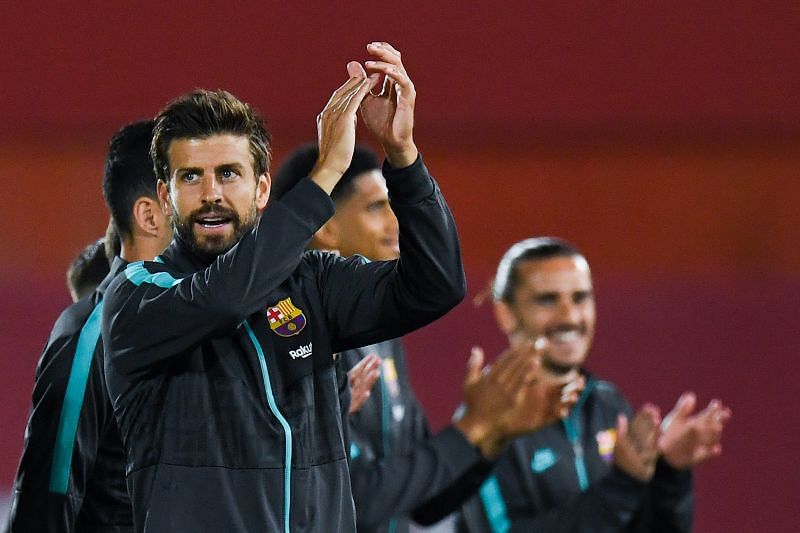 On this occasion, Pique did what he usually does: lead by example at the back. He dealt with danger effectively and rarely panicked under pressure during a tightly-contested fixture that could have easily gone against Barca here.

Making a game-high seven clearances, the 33-year-old made a block and interception while completing 93.2% of his passes. He won 12 of 16 duels contested, was fouled twice and importantly didn’t flinch in precarious situations where others may have done.

For example, the Barcelona man showed a great turn of recovery pace to keep up with and apply pressure to Didac Vila on the counter-attack before he subsequently hit the post.

Comfortable in possession, he was unafraid to venture into midfield with some confident runs under pressure. If not for that bullish attitude to push his teammates forward and prompt more movement at times, Lozano probably wouldn’t have been sent off.

He didn’t wilt as legs tired towards the end, either. Centre-back partner Lenglet was clearly shoved to the turf inside the box by Espanyol captain David Lopez, though the officials didn’t see it.

What did Pique do? Naturally he was on hand to head the ball clear under pressure as their city rivals continued probing late on, in search of an equaliser that never came. 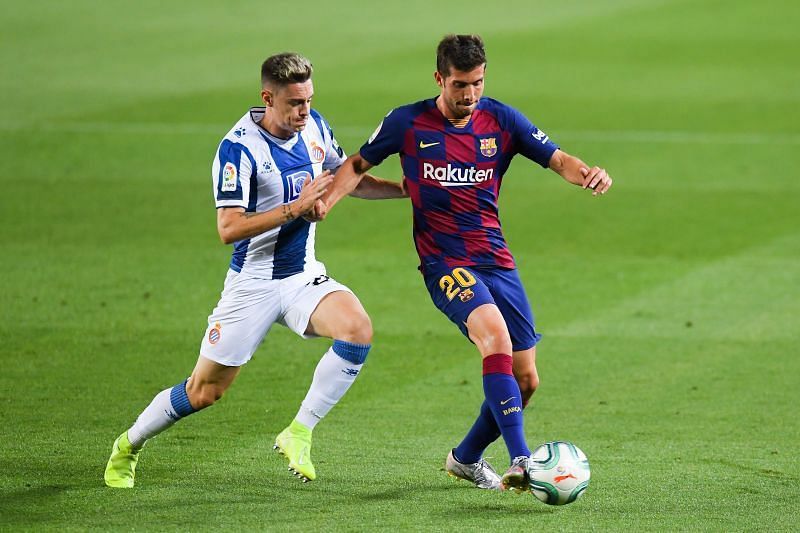 Roberto was excellent against Espanyol, displaying both his versatility and creative capabilities

Last but not least, Barcelona’s unsung hero: Sergi Roberto. Suarez will get the plaudits after another landmark goal, while ter Stegen and Pique both did their part as Barcelona’s last lines of defence under pressure.

However, the versatile Spaniard flourished as Setien rewarded his encouraging display against Villarreal with another starting opportunity ahead of Arturo Vidal.

Instead here, the 28-year-old was even better. He created a game-high three key passes, probably should have been rewarded with at least two assists and also duly slotted in at right-back to replace an underwhelming Nelson Semedo display after half-time.

He delivered perfectly-weighted passes for both Messi and Griezmann in the second-half. The former forced Lopez into a great stop at his near post with a powerful volley, while the latter headed his effort wide of the far post just before Suarez’s opener.

His passing was typically good (94.9% completion rate), while he completed three successful dribbles and won five of eight duels – registering a block, clearance, interception and tackle to boot.

Eager to help maintain Barca’s hard-earned clean sheet, he was visibly frustrated by his teammates’ inability to help him defensively from an Espanyol corner.

It ultimately flashed narrowly wide, yet Roberto found himself man-marking two players – Raúl de Tomas and second-half substitute Victor Campuzano – who both towered above him as the ball floated into the box.

That moment highlighted the hosts’ defensive deficiencies, as a better team probably would have taken that chance.

However, Roberto justified his starting berth in the team: now though, he must be more consistent to warrant a regular midfield place going forward.