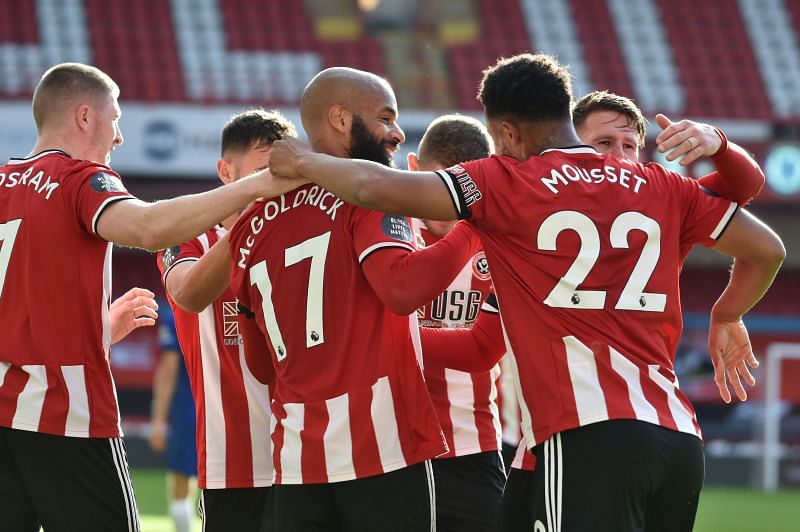 The lowdown as Blades break records at Blues’ expense

Chris Wilder’s side broke the deadlock after 18 minutes, as Oliver McBurnie’s deflected effort prompted a brilliant reflex save from Kepa Arrizabalaga.

Unfortunately for the Spain international, the ball fell perfectly for McGoldrick in the six-yard box, who made no mistake to finally end his goal drought in England’s top-flight.

It was 2-0 shortly after the half-hour mark, as Ben Osborn and Enda Stevens combined down the left-hand side.

The latter’s cross was met by McBurnie, who took advantage of poor defensive positioning to head home – earning his sixth league goal of the campaign.

Chelsea failed to take advantage of their sustained periods in possession and despite a few encouraging flashes, found themselves with a mountain to climb and a two-goal deficit in tow.

Frank Lampard made tactical alterations and substitutions to begin the second-half, though it was more of the same in a disappointing watch lacking urgency for Blues supporters.

Olivier Giroud and Tammy Abraham came close with chances, though neither were able to reduce a two-goal cushion that soon became insurmountable before full-time.

The hosts were clever in possession, held the ball up well and crucially took their chances – a mirror image of their 3-1 win over Tottenham last week.

McGoldrick probably couldn’t believe his luck after being gifted a second after 77 minutes, as Lys Mousset’s cross was poorly defended by fellow substitute Antonio Rudiger.

On hand to apply the finishing touch, the 32-year-old wheeled away to celebrate sinking a Chelsea side whose top-four credentials have weakened significantly with this result.

It could have been a heavier defeat, but for Mousset and Stevens firing wide from promising chances late on.

Without further ado, here’s a look at five talking points as Sheffield United were impressive enroute to inflicting Chelsea’s second defeat in their last four matches. 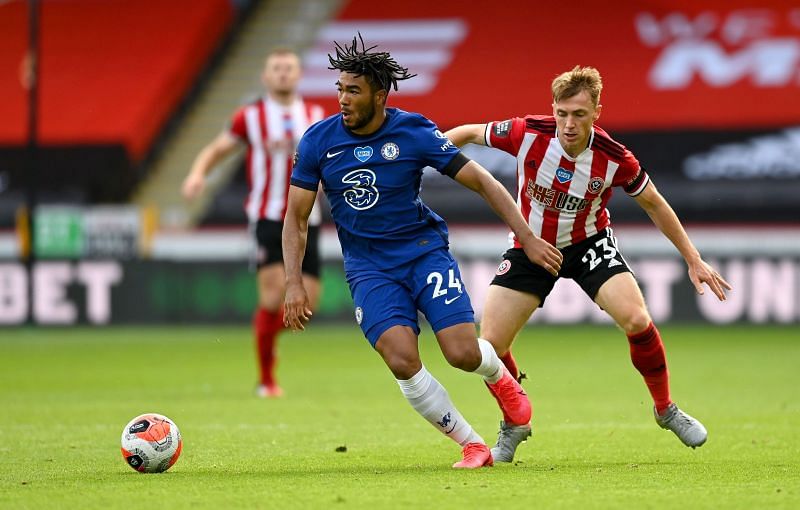 Ignore the reactionary comments from rival supporters and angry fans on social media.

Avoid comparisons with youngters in the same position – Trent Alexander-Arnold (21) and Aaron Wan-Bissaka (22) – and just watch a game for yourself.

It’s easy to see why James is so highly rated in west London and displays like this reiterate why he needs to play more regularly, both for his development and invaluable experience.

This was a forgettable away performance, yet the 20-year-old was among their best players before being replaced in an attacking change for Callum Hudson-Odoi with 15 minutes left.

The quality of his crossing has both been marvelled and used as a stick to criticise him with, as it’s easy to highlight inconsistent deliveries when you’re trailing in games and need a way back into proceedings.

He connected with three of seven attempts, won four of ten duels and lost possession 15 times – so why does he deserve a starting berth on that side of the pitch?

It’s easy to forget he’s still 20, this is his first Premier League campaign and one where he hasn’t had adequate support from teammates.

Compared with the competition, James is aggressive but channels that energy the right way in one-on-one challenges.

He’s a reliable passing option (86.1% accuracy, game-high three key passes) and forced Dean Henderson into a sharp save from distance before half-time.

He made a necessary defensive recovery early in the second-half as his teammates were again caught high up the pitch and refused to stop trying to help create chances. 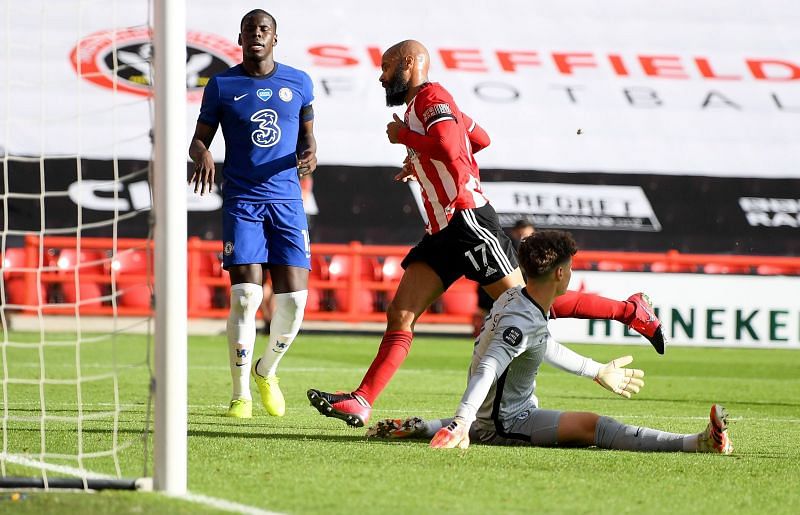 He has threatened on multiple occasions, had goals disallowed by VAR and missed golden opportunities, but the Ireland international was a grateful benefactor as Chelsea’s defence gifted him two close-range chances that he wasn’t going to pass up here.

His hard work and endeavour have presented him with 15 big chances that he has squandered to date this term, a statistic he’ll hope doesn’t increase in the final few weeks.

But it’s that tireless nature, impressive attack positioning and ability to hold-up play confidently under pressure that has seen him continue to assert himself as a mainstay within Chris Wilder’s overachieving side – despite being scoreless in England’s top-flight.

His first strike was great anticipation in the six-yard box after McBurnie’s initial effort was parried by an alert Kepa. He could do nothing to stop the rebound.

As for McGoldrick’s second, Chelsea again hand-wrapped a present that he gratefully buried from close-range.

Rudiger’s attempted clearance resembled an under-hit pass, rather than a boot to safety, and he slipped through unchallenged to slam home their third goal.

Importantly, his on-ball movement was critical during the build-up to Sheffield United’s third goal: carrying possession forward in transition, teeing up Mousset to his right and ghosting into the box to finish a poorly defended counter-attack.

He should have had an assist too, again releasing Mousset – this time after outmuscling Jorginho with worrying ease – who chipped his effort narrowly wide of Kepa’s far post.

It’s a welcome morale boost at precisely the right time for McGoldrick, who’ll be hoping he maintains this level of performance in the final third heading into the new campaign. 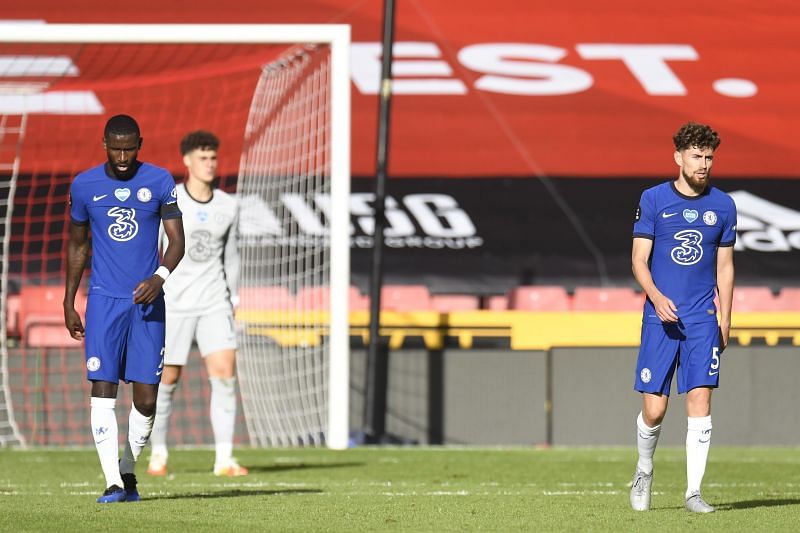 Chelsea were exposed all too often against a patient, calculate Sheffield United display

An unsettling pattern is emerging for Frank Lampard’s Chelsea and it’s not one that has been a secret throughout an inconsistent campaign to date.

Andreas Christensen and Kurt Zouma were caught ball-watching and duly punished for dithering out of possession.

The inability to sense danger on two separate occasions in the first-half was worrying, as both were slow to react and caught out of position for their hosts’ first two goals.

It just reinforced the point that Rudiger – scapegoated for his display in their defeat by West Ham – isn’t their only centre-back conundrum.

Fikayo Tomori (muscle) remains sidelined and while speculation suggests he could be loaned out in a deal that brings highly-rated Declan Rice back to the club, the Blues cannot pin their hopes on another young Englishman to save their defensive woes. It goes much deeper than that.

Jorginho failed to provide ample protection for his backline and drifted through the game for sustained periods, despite his orchestrative abilities from deep.

Questions remain over Christensen’s suitability at the heart of Lampard’s Chelsea defence and Zouma – their midweek saviour at Crystal Palace – didn’t exactly cover himself in glory here. 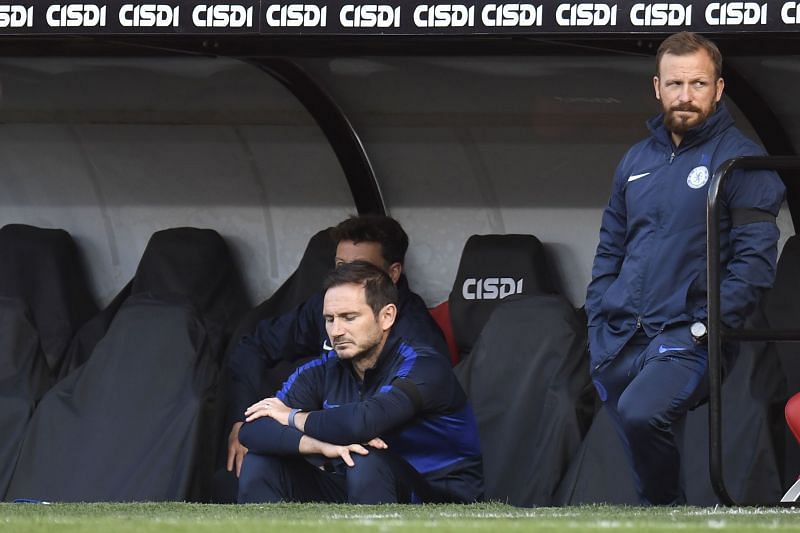 Lampard changed their formation and made subs, but cut a frustrated figure on the touchline

Lampard knew he needed to change things after a frustrating half saw Chelsea with a significant deficit to overturn.

They had passed their opponents to death at times, yet were losing duels and struggled in attempts to breakdown a disciplined Blades backline.

Mason Mount struggled to dovetail with Christian Pulisic down the left and subsequently sacrificed, while Christensen – who twisted his ankle minutes earlier – was also replaced.

On came Marcos Alonso, notorious for his attacking capabilities and baffling defensive positioning, as well as Rudiger. It was an admission that Chelsea needed to match, then eventually better, their opponents.

Changing shape to a 3-4-3 gave Alonso and James a licence to play as wingbacks, while Azpilicueta shifted into a central defensive trio alongside Rudiger and Zouma. It didn’t have the desired effect though.

Pulisic was tightly man-marked and struggled to really impact the game, while Ross Barkley was quietly one of their better players, yet left frustrated by a sloppy Abraham up-top.

Willian had his moments, but Sheffield United had a cushion to protect and were more than happy to defend in numbers whenever Chelsea edged closer towards Henderson’s area.

On came Phil Jagielka too, whose excellently-timed sliding block to deny Abraham’s goalbound effort rather typified a frustrating afternoon for Chelsea. 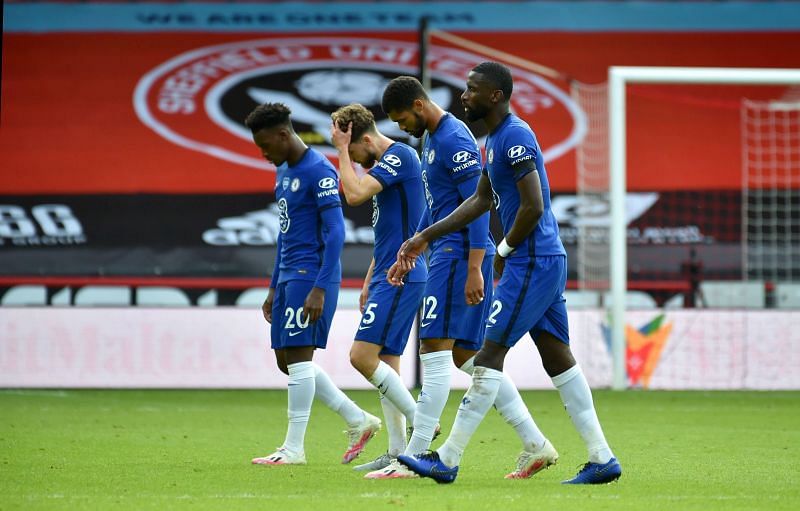 Chelsea, who could have opened up a four-point gap to fourth-placed Leicester by winning here, may find themselves outside the top-four altogether by Monday night.

With three league fixtures left to play, Chelsea’s defensive woes and creative inconsistencies have combined to find themselves in a precarious situation.

Only two points separate third from fifth at the time of writing, though it’ll be interesting to see what twists and turns are next in a compelling race for Champions League football.