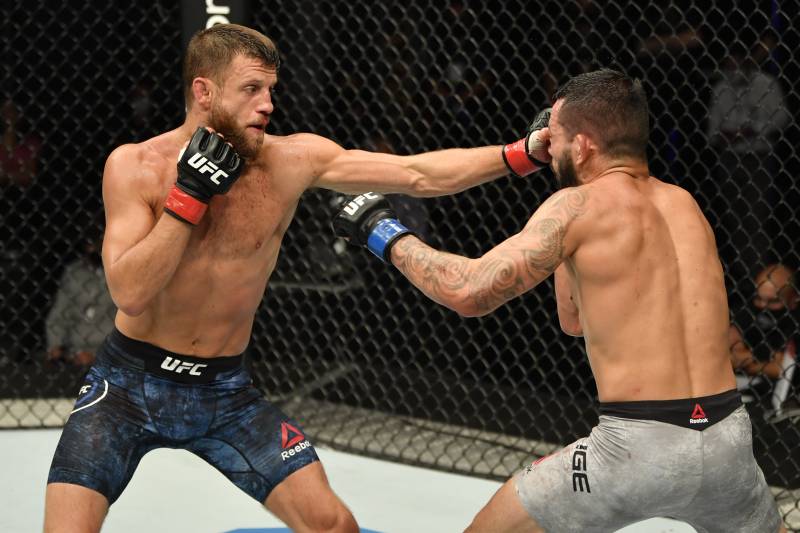 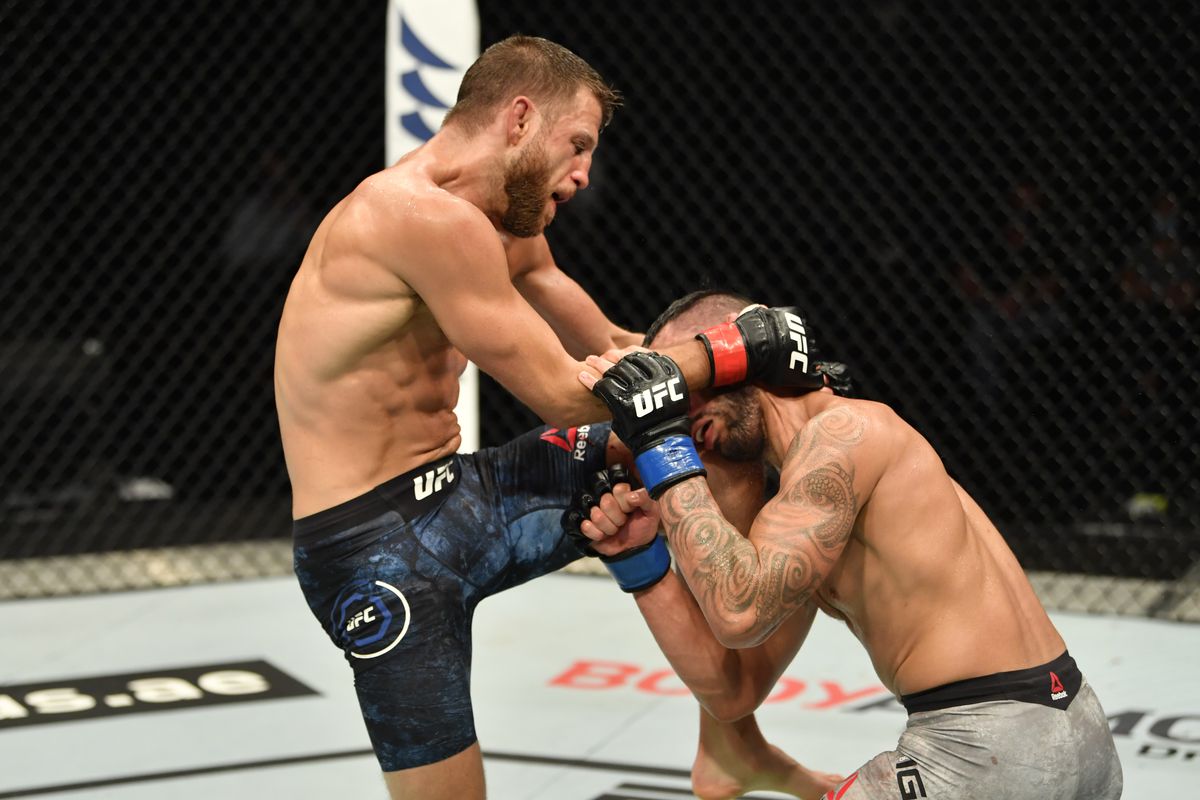 Kattar, who lost a Fight of the Night bout against #2 contender Zabit Magomedsharipov in Russia last November, is now on a two-fight win streak in double quick time.

If you cast your mind back to early May, the 32-year-old earned a TKO victory against Jeremy Stephens at UFC 249.

His insistence on returning to the Octagon quickly proved key in earning a matchup against #10 ranked Ige, who had a lot to gain on this occasion.

With a four-inch height advantage, the Massachusetts native quickly got to work in R1 after plenty of feinting and lateral movement around the cage by Ige.

In fairness to Dan, his fast hands were on display early on but once Kattar got accustomed to the speed, he started landing some nicely-timed counters of his own.

Being able to connect with big shots in the pocket saw Ige change tactic, which ultimately backfired against a physically bigger man in Calvin.

His takedown attempt was well defended and instead, he found himself absorbing some ground and pound strikes as Kattar finished the round strong.

R2 was more encouraging from Ige’s perspective, earning more success with his strikes and importantly mixing them more too.

Kattar appeared in some discomfort as blood poured down his face, from what the commentators suspected was a broken nose.

However, just like round one, he finished in the ascendancy. Landing a brilliant shot with 30 seconds left, Ige was rocked and Kattar could smell blood.

His subsequent audacious flying knee attempt narrowly missed the target and perhaps helped steal the round on the judges’ scorecards, even after a better round from Ige.

In R3, Ige was circling around a lot and making Kattar uncomfortable by landing a number of good combinations while connecting with painful-looking calf kicks too.

Kattar landed a few flurries as they exchanged strikes, though that was firmly an Ige round from my perspective.

R4 saw new territory for Ige: entering R4 for the first time in his professional career.

Ige persisted in his attempts to earn a takedown but Kattar’s wrestling defence remained excellent throughout.

He landed a nice kick near the cage which forced Dan into a precarious situation as Calvin began landing hammer fists.

When the fight returned to the feet, Kattar mixed things up with elbow strikes and despite Ige consciously applying more power to his punches, it was clear he was fading.

His head coach, Eric Nicksick, told him to “empty the gas tank” ahead of R5, where Kattar’s wrestling defence again came to the fore despite Ige’s best efforts – stuffing a whopping seven takedowns over the 25 minutes. 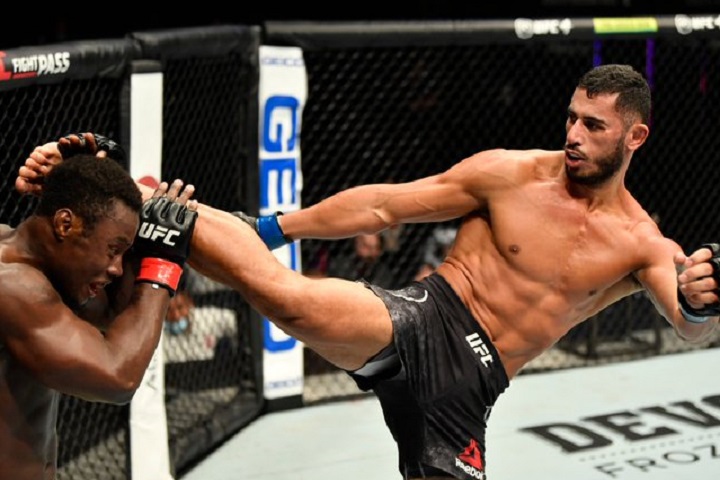 The evening’s main card got off to a flyer, as Mounir Lazzez outlasted Abdul Razak Alhassan in a frenetic and unpredictably strike-heavy catchweight (174lbs) bout.

Lazzez, nicknamed The Sniper, certainly lived up to his moniker during a memorable UFC debut for the Tunisia international, who was unfazed by Alhassan’s durability.

He landed 114 total strikes (59% success), with 98 of them significant over the 15 minutes. Alongside a perfect 100% takedown ratio, he displayed variety in his striking.

That, coupled with Alhassan’s determination not to be finished, earned this thrilling contest Fight of the Night honours after Lazzez won 30-27, 30-27 and 29-28 on the judges’ scorecards.

What made this even more interesting, was his callout of Mike Perry afterwards. After an impressive win over Mickey Gall last month, it’ll be interesting to see whether the outspoken American accepts this latest challenge. 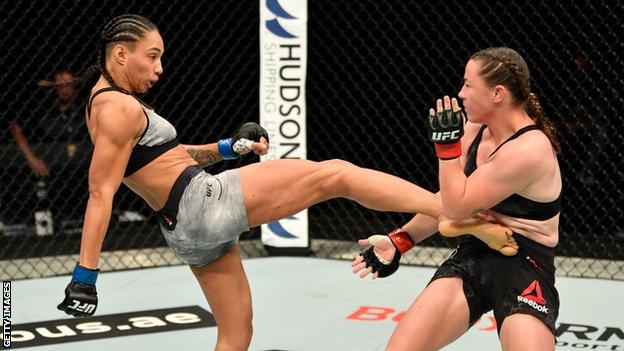 This was her first UFC win and after three previously scheduled fights were shelved since losing to Mara Romero Borella via split decision last February, the 27-year-old was happy to boost her ever-growing reputation.

Afterwards, she revealed her pre-fight preparations had paid off.

“I’m really happy with my first win in the UFC. Today I was focused, had a great fight and won. I have my Muay Thai roots but we expected her to come and try taking it to the ground. I train with the best grapplers, so was ready for that.”

In the flyweight division, Tim Elliott enjoyed a quick turnaround after his Fight of the Night defeat by Brandon Royval on May 30. 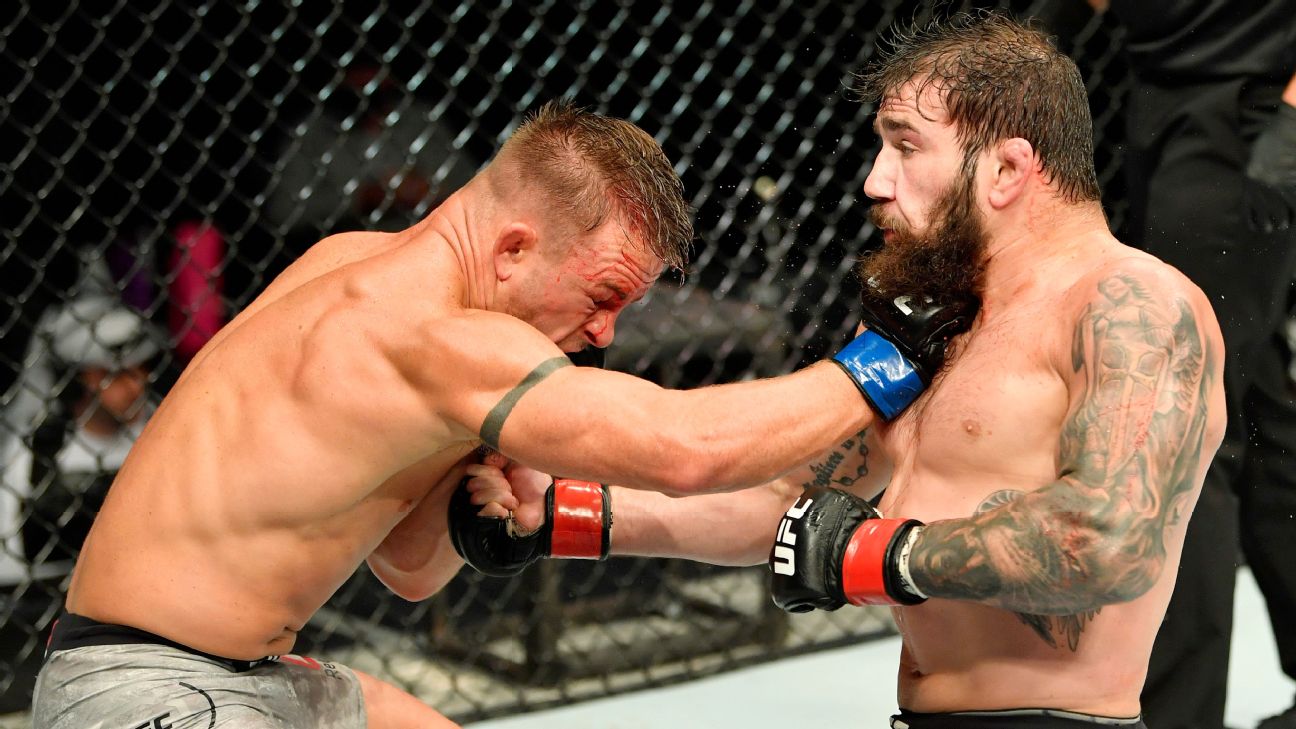 Having suffered back-to-back defeats against #1 contender Aljamain Sterling and new featherweight champion Petr Yan last year, this win sees him up to #8 in the rankings.

In the evening’s first bout, bantamweight Jack Shore was victorious against Aaron Phillips via a rear-naked choke submission, midway through R2.

In the light-heavyweight division, Modestas Bukauskas had an impressive TKO (elbows) win over Andreas Michailidis to finish R1 of their encounter.

Elsewhere, featherweight Lerone Murphy made light work of Ricardo Ramos (14-3) with a TKO victory during the evening’s penultimate prelim bout.