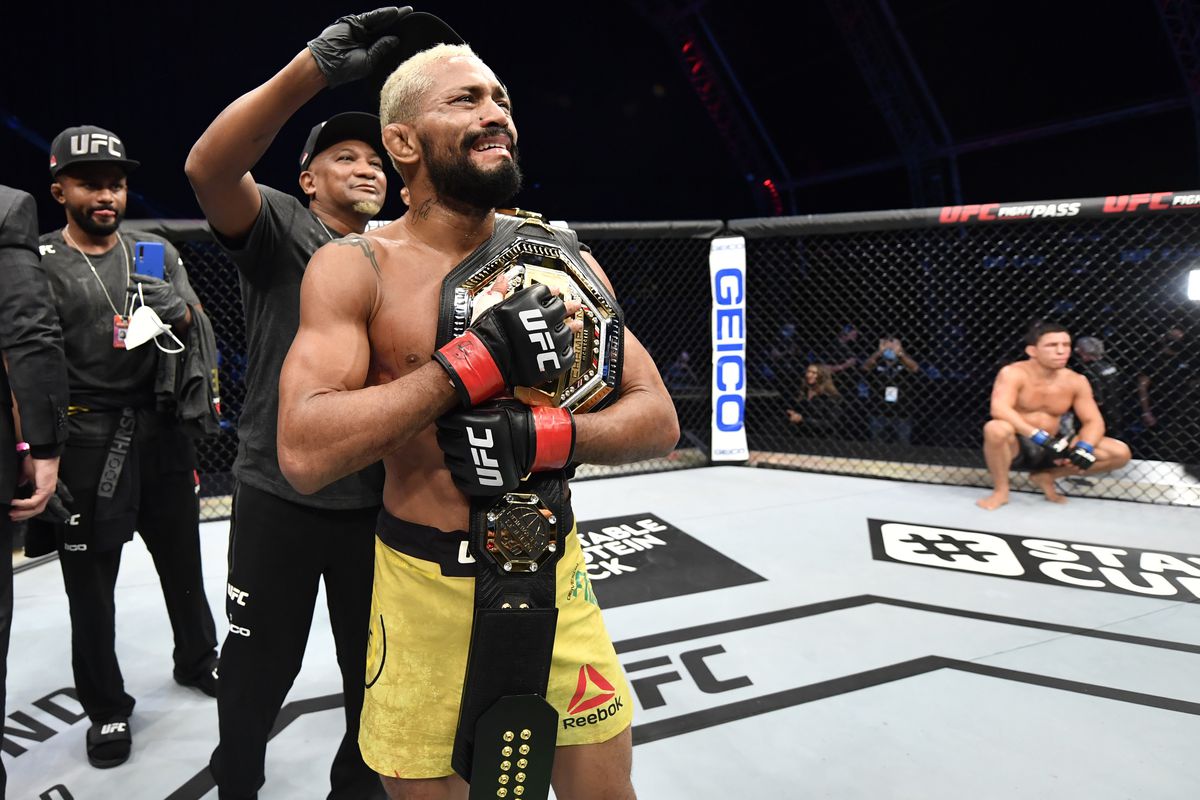 There was a new flyweight champion crowned as Deiveson Figueiredo simply decimated Joseph Benavidez in their rematch, after #6 ranked middleweight Jack Hermansson put the division on notice with an impressive submission win against the returning Kelvin Gastelum in a brief but blistering co-main event matchup.

Figueiredo delivers on his promise, chokes Benavidez to win belt

In the pre-fight promo, Figueiredo described himself as a tiger waiting for their prey and once he had Benavidez in his clutches, the 35-year-old wouldn’t be able to escape.

He wasn’t wrong. His heavy-handed approach and relentless submission attempts made this tough to watch from a neutral perspective, even after Benavidez somehow recovered – to a degree – after three separate knockdowns and rear-naked choke holds.

The writing was quickly on the wall for Benavidez, who knew this was the final title opportunity of his career.

He said his preparation was excellent, no shortcuts were taken and he wanted to right the wrongs from his controversial TKO defeat five months ago.

There were no arguments or unanswered questions after an assertive, ruthless display by his Brazilian opponent here.

Figueiredo has the most wins (8) and finishes (6) since 2017 across the flyweight division, so perhaps the manner of this victory shouldn’t be surprising.

But against an MMA legend (28-7) who was blown away in his final chance at UFC gold, the speed of his striking really came to the fore after a flash knockdown early on.

The 32-year-old, nicknamed God of War, raced to the ground. After some ground and pound strikes, he held tightly thrice as Benavidez did well to survive the onslaught.

To think Figueiredo used to make sushi, cut hair and tame buffalos with those hands. A true marvel.

Benavidez kept his hands up and landed some combos (67% total strike success, 22 of 33), but every time he was hit clean, down to the canvas he fell again.

The third knockdown was the worst: more strikes from top position followed as he choked Benavidez unconscious – being the first fighter to do so in his 14-year career.

That’s a vicious flyweight if I’ve ever seen one ! DAMN #UFCFightIsland2

During the post-fight presser, an emotional Benavidez revealed he’s unwilling to retire after a comprehensive defeat like that and will be eyeing a return at some stage.

As for Figueiredo, he oozed confidence (88% significant strike success, 35 of 40), prompting Dana White to praise his dominant display, which earned him a bonus too. 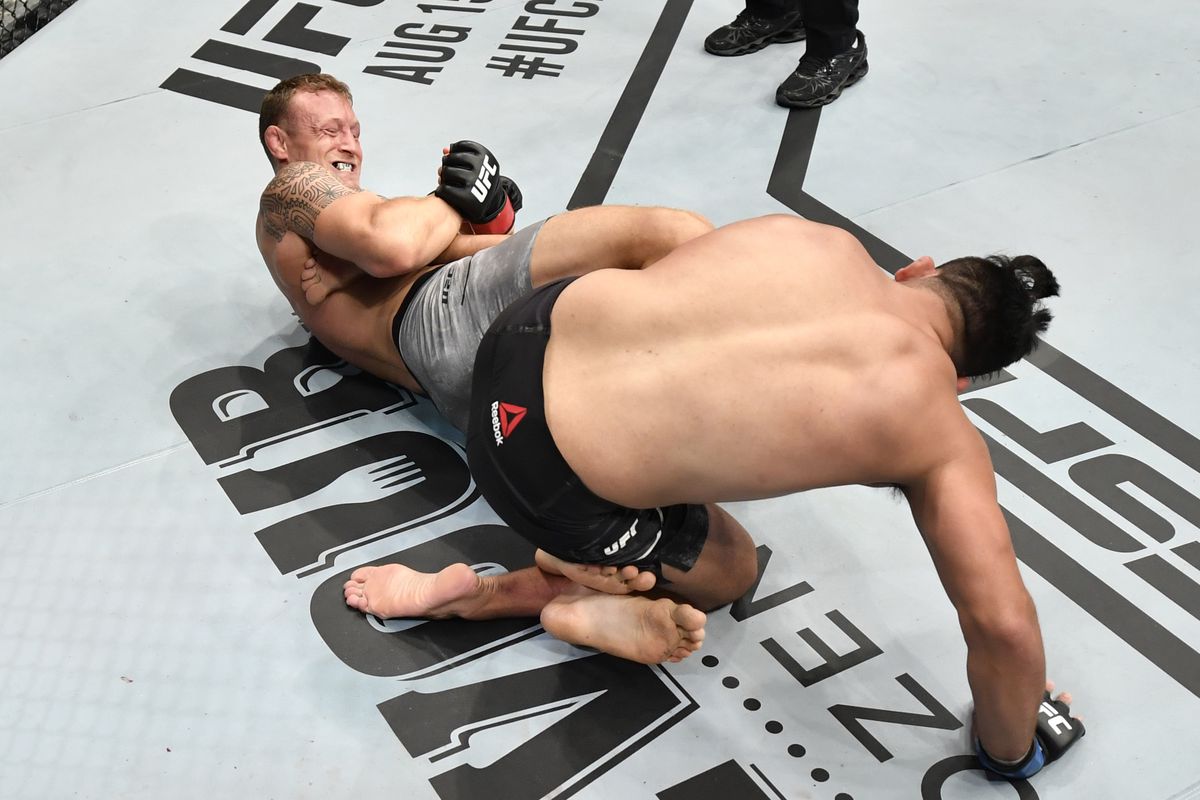 Jack “The Joker” Hermansson proved anything but a joke on the ground, making light work of #7 ranked Gastelum less than 90 seconds in R1 of their co-main event matchup.

With the third-highest striking rate in UFC middleweight history (5.13 per minute), many suggested an intriguing stand-up battle awaited the Swede-Norwegian here.

After landing a few kicks of his own before narrowly dodging a swinging haymaker against the smaller fighter in Gastelum, that notion was definitively proven wrong.

He ducked under and quickly tossed Gastelum to the ground in an impressive reversal takedown manoevure, though Kelvin tried to counter, finding himself in deep waters.

Less than 30 seconds later, it was all over. Just like that, via a heel hook Gastelum couldn’t escape and suddenly his big opportunity for a statement victory evaporated.

Said to be in good shape and tranquil this week during the fighter meetings, the 28-year-old – who challenged for middleweight gold last year – is now 0-3 since April last year.

Statistic: This victory means he’s now tied with Gerald Meerschaert for the most finishes (6) in the UFC’s middleweight division since 2016.

Hermansson meanwhile, has his sights set on big future fights as he climbs his way towards a title shot himself. Post-fight, he said:

“Every time I step in here, it’s so much pressure. Everything I do in my life, I’m working towards the goal to be the best in the world. When you get the victory, there’s no other feeling like that, I love it.”

On how the division’s title picture stands after this:

His comments are interesting, though led to Dana clarifying that Adesanya-Costa isn’t yet a done deal despite recent speculation suggesting otherwise on social media.

Meanwhile, the matchmakers are yet to decide exactly what’s next for Hermansson – who lost to Cannonier himself last September in Copenhagen.

Rest of the main card, featuring big wins for Fiziev and Lipski 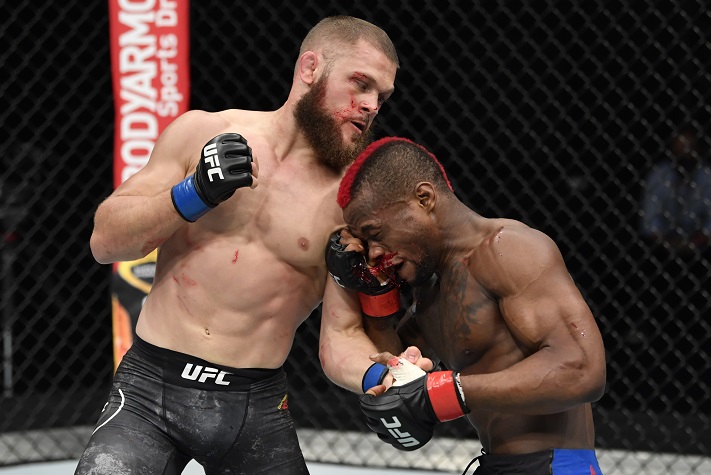 Fiziev landed a number of stinging kicks from minute one, where a heavy body strike allowed him the opportunity to engage in a body lock.

From there, the fight transitioned to the ground as Rafael completed a well-timed takedown.

After they returned to their feet, Fiziev landed another bruising kick to the body and was making a conscious effort to connect with both beautiful combinations.

Implementing knees too as they engaged in the pocket, Diakiese had a bloodied nose for his troubles as the Englishman struggled to create sufficient striking distance.

To start R2, both exchanged leg kicks but Fiziev wowed the commentators – and everyone watching at home – with some ridiculous defensive reflexes on display.

Diakiese was unafraid to swing and load up on punches, though his 5’8 opponent was suitably prepared for that forward pressure.

In turn, he continued walking down Diakiese with more punch combos while displaying good ringcraft to slip and dodge away from strikes when he felt it was necessary.

Rafael Fiziev's talent is glowing through my TV screen. This man is a machine. #UFCFightIsland2

R3 saw an intensity shift from Diakiese, after some encouraging but equally important words from his corner between rounds. He needed to go for the finish and as evidenced by his purposeful start, was starting to achieve more striking success.

Fiziev continued connecting with yet more leg strikes and punches to the body, as you could audibly hear Diakiese’s corner shout “one shot isn’t going to take it, combos!”

To his credit, he landed a brilliant right hand shot which rocked Fiziev. Instead of being able to capitalise on that though, the Kyrgyzstan native invited him to engage closer.

He knew, as well as the judges did, that although Diakiese’s late flurry was spirited, it ultimately arrived ten minutes too late as far as the scorecards were concerned.

Nonetheless, this was an impressive display by a lightweight who’ll be eyeing a rise up the rankings and has certainly boosted his reputation with this main card showing. 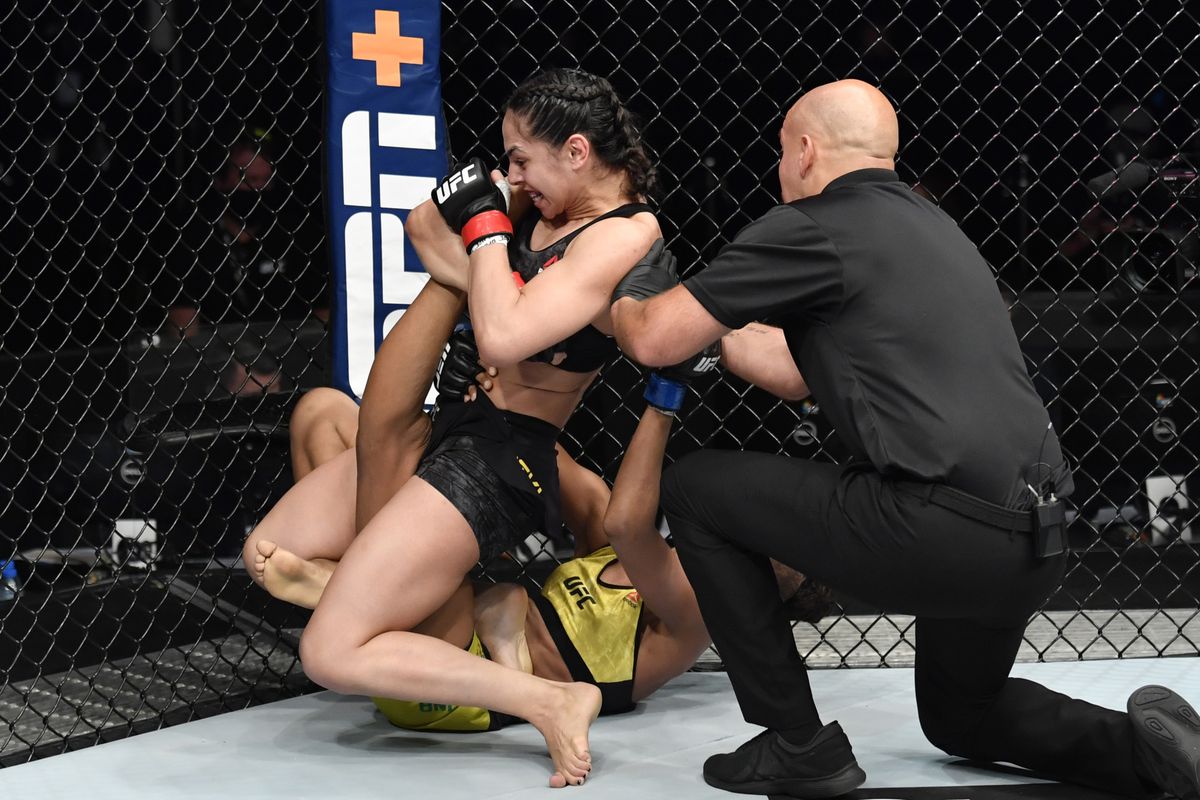 Sometimes, a single picture can say all you need to know about a fight.

In this case, Ariane Lipski’s quick submission victory over Luana Carolina is effectively summarised by the above photo – achieving such a tight hold that her opponent and Brazilian compatriot needed to be helped out of the Octagon afterwards.

Having danced her way into the cage beforehand, the aptly-nicknamed Violence Queen had the last laugh and looked impressive – this being her first fight of 2020.

As endorsed by company president Dana White in the post-fight press conference, this was an encouraging display from the former KSW flyweight champion.

It’s easy to forget she was 0-2 just six months into her UFC career after unanimous decision defeats against Joanne Calderwood and Molly McCann last year. She’s now 2-2, having earned her first stoppage victory since October 2017.

Having signed a new four-fight deal before this, it’ll be interesting to see what’s next in store for the 26-year-old Brazilian, who also earned Performance of the Night honours.

While there was a new flyweight champion crowned, #7 ranked Askarov earned a big victory which should see him soar up next week’s rankings vs. #4 ranked Pantoja.

During the main card’s first bout, the encounter went the distance and Askarov was able to showcase his abilities both in stand-up exchanges as well as a credible ground game.

Both fighters landed takedowns and R2 saw Pantoja adjust, though he was ultimately beaten by a better grappler in the 27-year-old, whose record (12-0-1) remains unbeaten.

There were back-to-back bantamweight bouts on display, with contrasting finishes. Amir Albazi raced to a R1 submission win (via triangle choke) against Malcolm Gordon.

There was another early submission victory as lightweight Joel Álvarez defeated Joseph Duffy with a guillotine choke midway through R1.