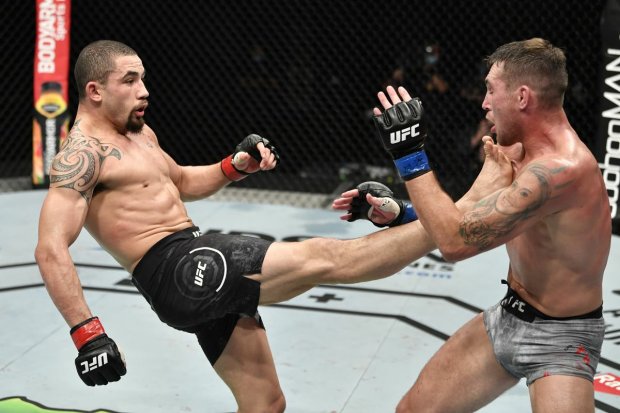 #1 middleweight contender Robert Whittaker returned after a nine-month absence, earning a difficult but important decision victory over Darren Till in tonight’s main event. There were also statement wins for Fabricio Werdum and Carla Esparza among others.

Till displays flashes, but Whittaker ultimately proves too much 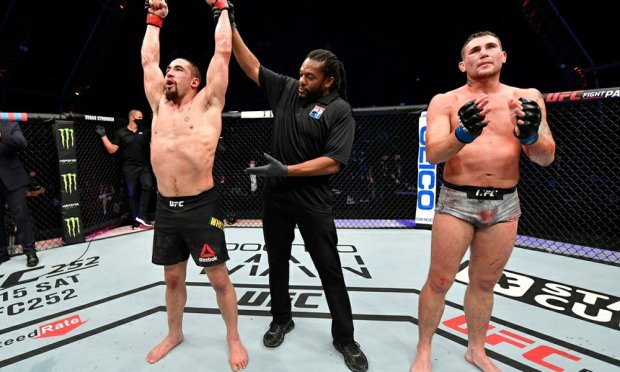 Till went the distance against the former champion, but emerged second best

Darren Till had an eerily silent walkout enroute to the Octagon, though his striking was explosive and anything but.

However, #1 middleweight contender Whittaker’s big-fight experience and technical acumen came to the fore during their 25-minute battle.

He landed 100 strikes, including 42 in a commanding R2 display, enroute to a unanimous decision victory – 48-47 on all three judges’ scorecards.

This was his first bout since losing the middleweight strap to Israel Adesanya at UFC 243 last October.

Needing time off to refresh and re-energise, the 29-year-old started well but found himself in deep waters early against the heavy-handed Scouser.

After being stung on a handful of occasions by Whittaker’s counter-punching as he advanced too eagerly, Till scored a knockdown with a sweet elbow.

To the former champion’s credit, he showed good recovery skills and survival instinct to still make the round competitive – having been visibly stunned.

Nonetheless, it was advantage Till after five minutes. That early lead soon evaporated though, as the roles were reversed quite dramatically in R2.

He scored a knockdown during a busy round packed with punches and ground control, including 15 significant strikes where Till found himself overwhelmed.

The scores were firmly level by this point, with R3 seeing more of an aggressive approach by Whittaker.

He threw caution to the wind, loading up with power behind his swinging punches but often telegraphed them too much – allowing Till to slip and dodge often.

However, the ability to mix up his striking and leave the #5 ranked contender constantly second-guessing was key.

Whether it was a bruising barrage of leg kicks (30 landed) or persistent efforts to score takedowns, he consciously took more risks and was unafraid to leave himself open by doing so.

Till did plenty of feinting and weaving, trying to suss out the best way to counter-punch his way into closing the distance and fighting in the pocket.

However, Whittaker was again the more busy of the two and his jab allowed him to control centre-ring.

R4 resembled a chess match as both did their utmost to gain the upper hand without much activity early on.

Having shared the octagon with both those guys…the mental aspect of the fights is almost a grueling as the physical. Constantly have to be on your toes entire 25 mins. Great win @robwhittakermma #UFCFightIsland3

Right on cue, Till landed a handful of power punches but Whittaker’s chin and subsequent reaction showed he was undeterred – connecting with good work of his own in the clinch.

Till showed better movement and impressive takedown defence when under pressure: this was two rounds apiece heading into the finale.

After some passionate words of encouragement from his corner, Till started purposefully but slowed down and crucially didn’t make Whittaker uncomfortable enough with sustained forward pressure.

By contrast, The Reaper was able to change intensity both seamlessly and momentarily when he needed to.

This one left Whittaker with a stream of blood gushing down his shoulder and proved the catalyst for urgency: he finally secured a takedown (completed just 2-of-13) and it was a timely one too as the round reached the final minute.

Judging by the huge roar from his cornermen immediately afterwards, they knew securing that takedown was key during a back-and-forth affair.

I still wanna fight Till one day.
His striking is beautiful.
Stay up Darren!
🥺

Whittaker described the fight as a stressful one he hopes people can appreciate, saying it was one of the most technical he’s faced in his career to date.

He was also surprised by Till’s stubbornness as far as the gameplan was concerned, refusing to commit to strikes and waiting patiently for openings instead.

Although he remains #1 contender with this victory, it’ll be interesting to see how the UFC books him going forward. Adesanya is slated to face #2 ranked Paulo Costa next, with recent speculation suggesting it will headline UFC 253 in September.

#3 ranked Jared Cannonier is on a three-fight win streak, the last of which was against Jack Hermansson (#6) in Denmark last September.

As for Till, it’s unclear where exactly he goes from here. As mentioned, the rest of the top-ranked middleweights appear preoccupied with other bouts so the 27-year-old will probably have to be patient and face a lower-ranked opponent when he does return.

During the post-fight presser, he revealed he’ll probably get surgery after blowing out his knee – but remains in good spirits after an impressive all-round display.

“Credit to him, in round two he [Whittaker] knee stamped me, it blew my knee completely and I couldn’t… after that, I had to stay static and fight on it.

I don’t think he recognised but I’m not trying [to make excuses], but it was a real good fight. I feel we both won, it was a clinically great match.

There’s millions of fights out there for me – I’m one of the top guys in the organisation and will continue to be.

If Rob doesn’t get a title shot, I’d love to go to New Zealand and fight him again. I was more powerful but he was the busier, that’s just sometimes how it is.”

Chimaev steals the show to kick off main card 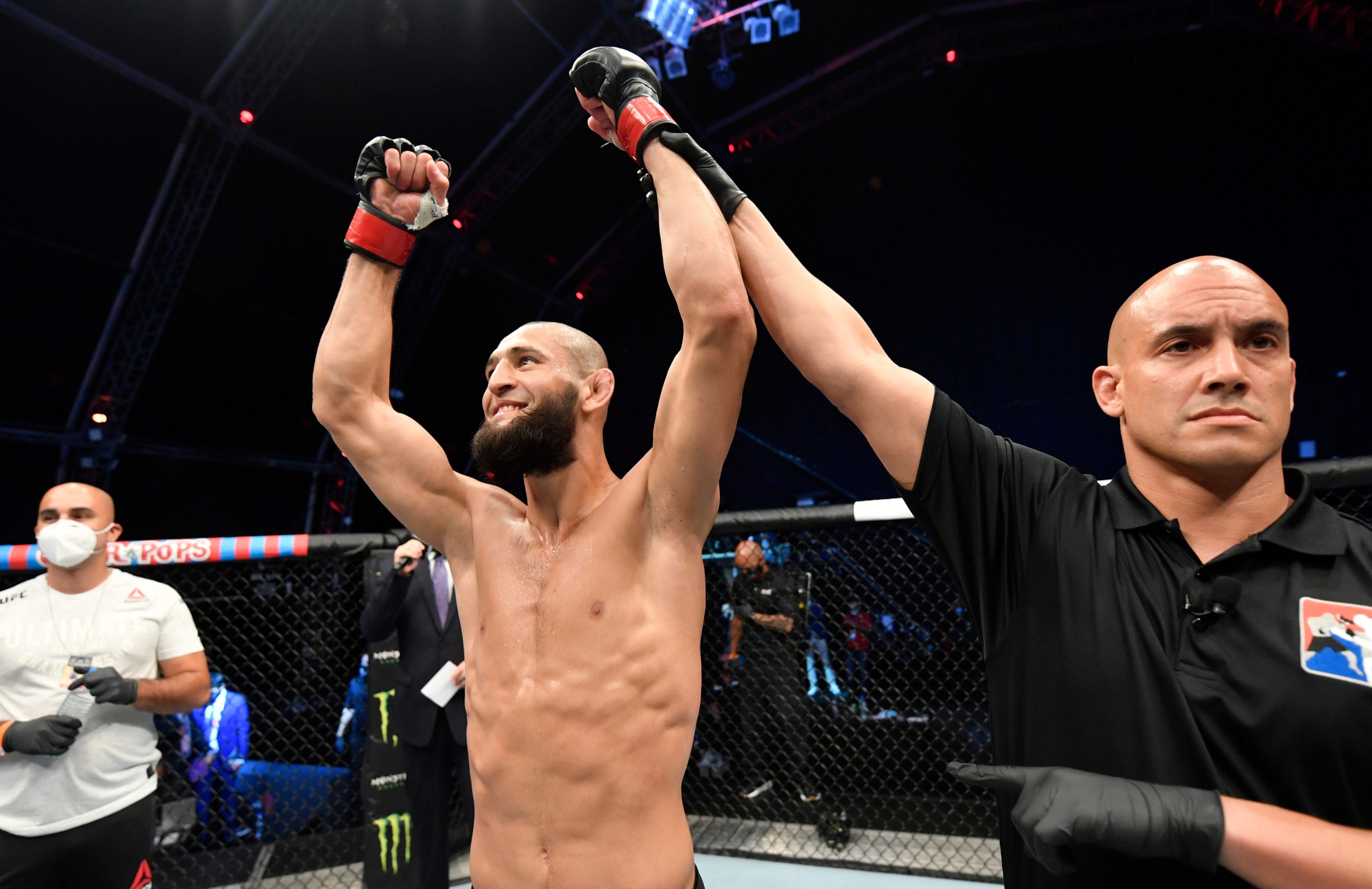 In the welterweight division, Khamzat Chimaev made a piece of UFC history with a R1 TKO finish against Rhys McKee.

After securing a takedown midway through the round, it was quickly the beginning of the end for the Irishman, who failed to land a single strike.

He surpassed Chas Skelly (13 days) and Chris Leben (14) for the quickest turnaround victory, having beaten John Phillips during the final prelim on the Kattar-Ige card.

Unsurprisingly, he was in defiant mood during the post-fight interview and issued a challenge to any opponent that wants to face him next.

Whether it’s at welterweight or middleweight, he’s both fresh and hungry to return again quickly. After such a dominant showing, you’d expect it to be against a ranked opponent.

Prelims as heavyweights Aspinall and Boser among those to impress

Starting with the one drawing the most headlines for a dubious stoppage by Herb Dean, Francisco Trinaldo beat Jai Herbert with a R3 TKO in their catchweight (160lbs) bout.

That wasn’t the issue though. Trinaldo, an MMA veteran who turns 42 next month, landed a devastating punch that saw Herbert hit the mat.

Dean allowed the fight to continue, assuming his opponent would try and recover by defending himself from ground-and-pound strikes.

It was an uncomfortable watch, made unnecessarily worse by commentator and former fighter Dan Hardy angrily confronting the official afterwards. See for yourself:

He lost each of his prior UFC bouts – in 2013 and 2014 – by split decision, against Michel Prazeres, Trinaldo and Kevin Lee. Now 34, perhaps this kickstarts a career resurgence.

Speaking of impressive performances, heavyweight Tom Aspinall wasted no time at all on a memorable UFC debut against the experienced Jake Collier here. 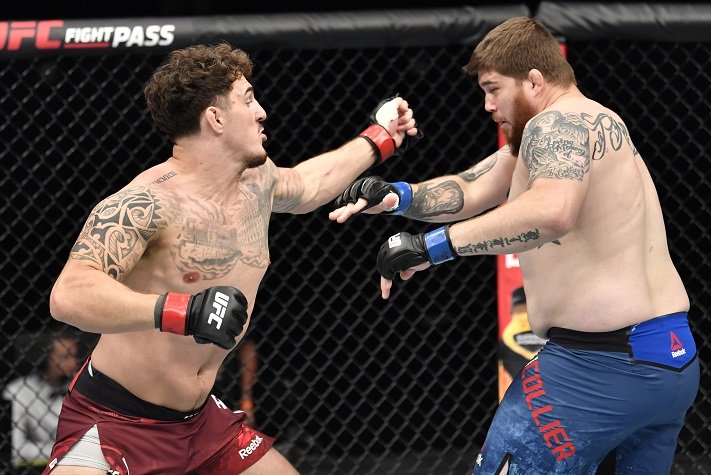 Aspinall had a UFC debut to remember vs. Collier, who was making his first appearance at HW

The 27-year-old needed just 45 seconds to complete his work rather ruthlessly with a brutal TKO punch combination, before calling for a fight against Sergey Spivak next.

There was just one featherweight bout of the evening, which rising star Movsar Evloev seized the initiative enroute to a unanimous decision victory against Mike Grundy. 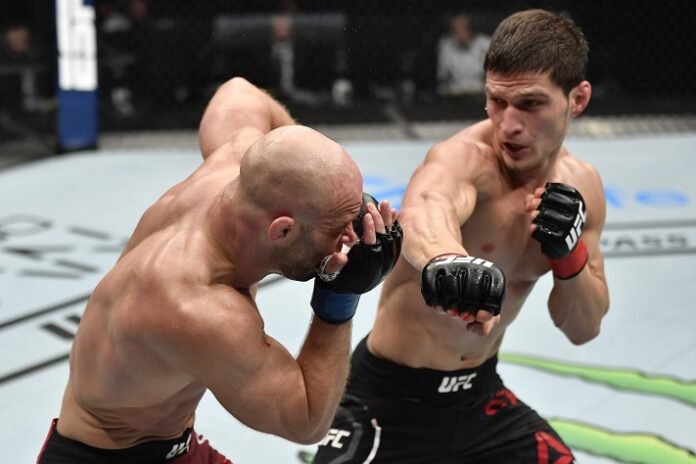 With 30-27 on two judges’ scorecards and 29-28 on another, the 25-year-old maintained his impressive unbeaten record (13-0) while extending his UFC win streak to three.

Canadian heavyweight Tanner Boser is keen to make up for lost time and certainly did that with a second-round TKO finish to dispatch of Raphael Pessoa. 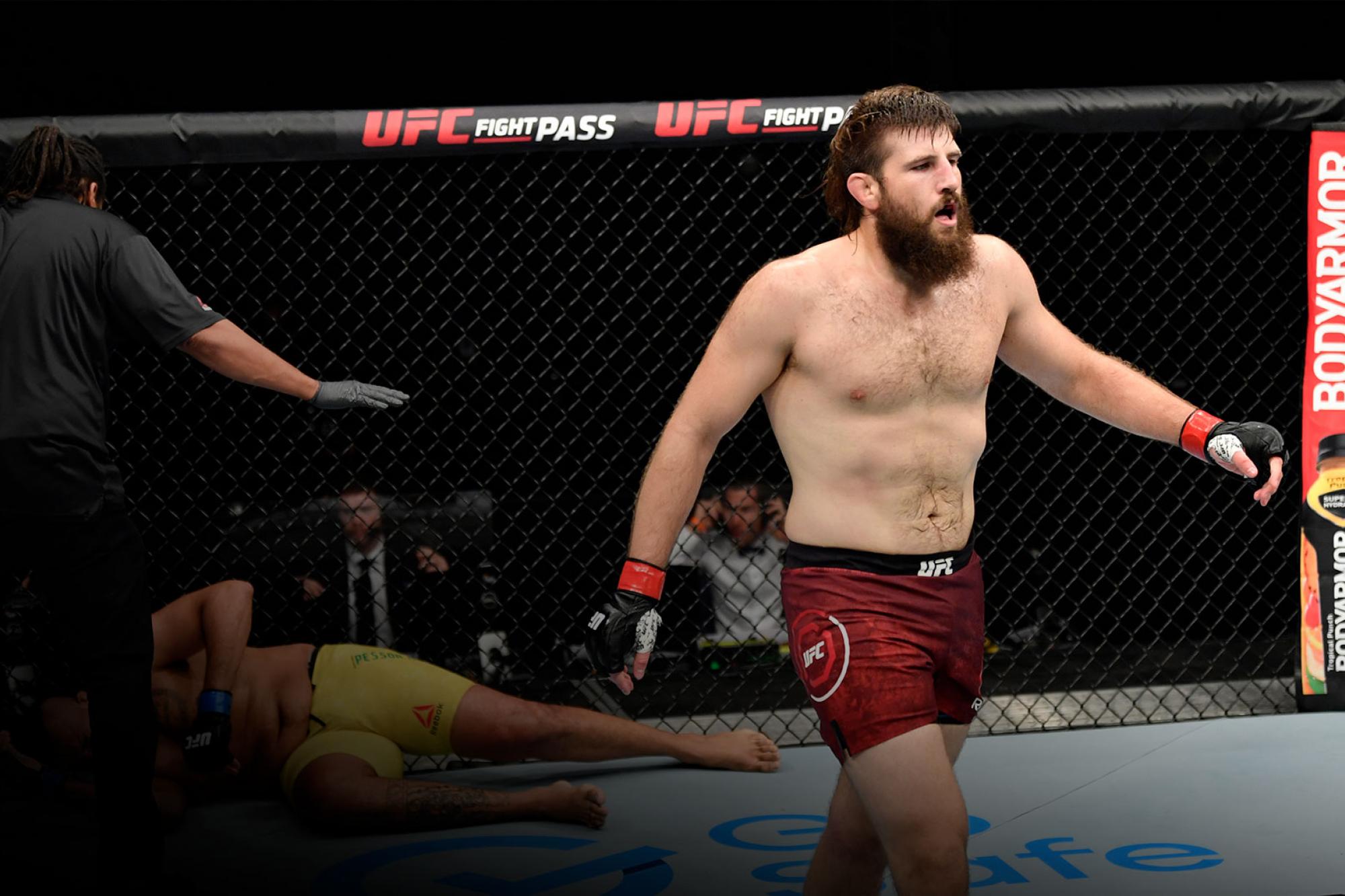 Having blasted Philipe Lins on the Poirer-Hooker prelims last month, he earned a Performance of the Night ($50,000) cash bonus after another impressive showing here.

In the women’s bantamweight division, Pannie Kianzad was ultimately victorious after a 15-minute scrap against one-time title challenger Bethe Correia (30-27, 30-27, 29-28).

To kick off this card in the bantamweight division, Nathaniel Wood was victorious against John Castañeda with an emphatic UD victory (30-27, 30-27, 30-27).