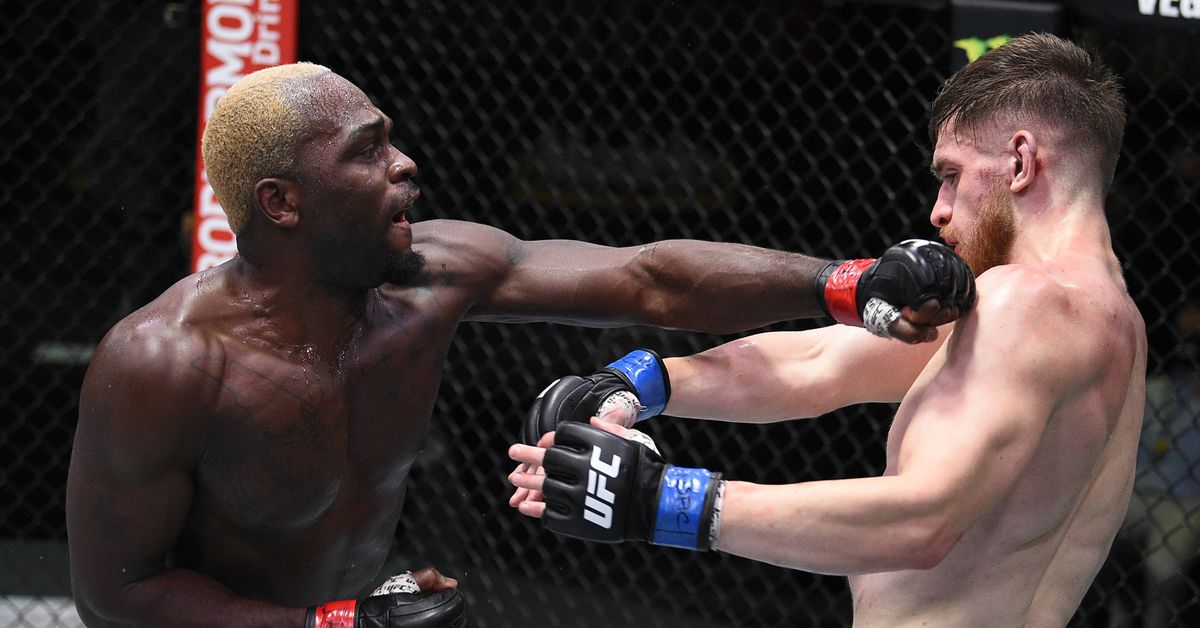 I’m usually hesitant to listen to pre-fight promos from fighters, who usually have a plan or bold prediction for their upcoming bout – all for it to vanish into thin air once the opening bell sounds in the Octagon.

“If he thinks I’m a gatekeeper, he’s in for a rude awakening,” Derek Brunson said before his latest main event bout against 22-year-old rising prospect Edmen Shahbazyan.

He wasn’t wrong. Golden Boy was making his main event debut here in the toughest challenge of his career to date and despite a promising start by Ronda Rousey’s protege, he drowned in deeper waters once the fight progressed into the later rounds.

After a tentative first minute or so, the pair exchanged strikes. Shahbazyan pushed the pace, although Brunson was picking his shots and adopted a more methodical approach than fight fans are used to seeing from the 35-year-old.

Edmen landed a nice right hand, connected with a two-punch combination and you could see Brunson visibly feeling the power in the youngster’s heavy hands.

Ultimately though, he was undeterred. Brunson pushed forward towards the cage and did well to complete a takedown, after which Shahbazyan returned some powerful punches of his own after they returned to their stand-up battle.

It was a closely-contested round, but all three judges had scored it 10-9 in favour of the main event debutant. Unfortunately though, that was as good as it got for him.

There was a temporary pause in the action during R2, as Brunson caught Edmen with an accidental eye poke. From the resumption, Shahbazyan landed a nasty body kick and another punch combination.

It was remarkable to see how quickly the roles reversed though, as Brunson again applied pressure near the cage and completed another takedown.

He showcased his wrestling, before connecting with some painful ground-and-pound strikes that saw referee Herb Dean almost stop the fight with seconds left in the round.

After another stoppage for a doctor’s inspection in-between rounds, Brunson could smell blood. Shahbazyan’s determination to continue was admirable, but even just by looking at his body language, you could sense a defeated fighter knew his fate.

Brunson continued where he left off with clubbing punches and after grabbing Edmen’s back near the cage to begin unloading strikes, the fight was ultimately waved off.

He’s now 3-0 since joining the Sanford MMA gym last year and is slowly but surely working his way back towards the top of a stacked middleweight division.

Post-fight, he said it’s important for him to rest and recuperate at home with his family but promised to be “targeting somebody” in the division by next week – namechecking both Darren Till and Jack Hermansson during his press conference.

Brunson looked good, in great shape. Smart first round, took over in 2nd and then got the finish. What a performance. @DerekBrunson should be proud. Head up @edmenshahbazyan what a great night of fights.

Maia made Calderwood pay for taking a risky fight, rather than wait for Shevchenko to heal up

In the evening’s co-main event, #3 ranked Joanne Calderwood put her number one contender spot on the line against a determined opponent in #6 ranked Jennifer Maia.

Dana White was full of praise for her decision, but it ultimately backfired for the 33-year-old Scot, submitted late in R1 against a gamely opponent who seized her opportunity.

Maia was content to stand and bang with JoJo, as you could see Calderwood was being caught fairly quickly without effectively moving her head nor dodging many punches.

In fairness to her, she tried to create distance with leg kicks and knees but Maia kept pushing forward and found herself comfortable fighting in the pocket.

She was bouncing and much more active over the five minutes, though her initial attempt to mix up her striking saw Calderwood catch a high leg kick.

It allowed Joanne the opportunity to complete a takedown and get to work on the ground, though her Brazilian opponent’s reversal skills were on full display here.

Within a minute, she showcased her jiu-jitsu black belt ability to devastating effect from a precarious situation, flipping Calderwood over from the bottom into an armbar.

Damn calderwood just lost her title shot taking a big risk there and losing. Gotta feel for her

Just like that it was all over, and after a passionate celebration, she gesticulated that a title belt should be around her waist – not just her hand being raised post-fight.

It seemed fitting then, that during the post-fight interview with Paul Felder (translated by Gilbert Burns), they showed this tweet on screen: 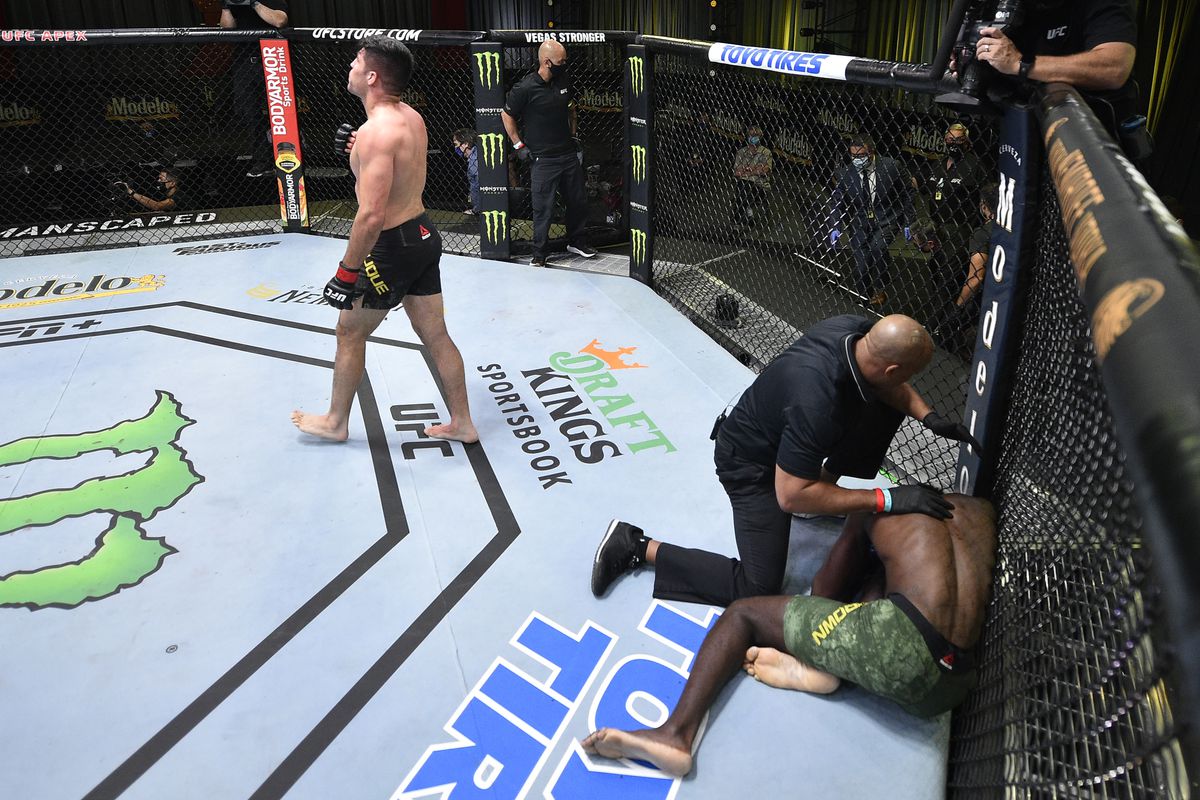 Vicente Luque (19-7-1) continues to show why he’s so highly-regarded in the welterweight division after an impressive display against Randy Brown (12-4).

After loading up on kicks early on, you could see Brown didn’t make the necessary adjustments to check the Silent Assassin‘s leg strikes. Instead, he tried to mirror him.

That certainly didn’t work and instead, Luque stunned him with a sweet knockdown.

Felder and Dominick Cruz were both confused on commentary duty, as the 28-year-old refused to push for a finish and instead tried to go for a submission.

When they returned to their feet, Brown was doing well with his jab and utilising his height advantage well – but Luque mixed his shots to good effect, so was unfazed.

Brown was getting some useful advice from his cornermen, urging him to engage with better defence and control the centre of the ring. It was well-placed but proved futile.

After a purposeful start to the round, Brown was visibly fading. Luque continued to target his legs and grounded him with a well-struck calf kick.

Once he got up again, the American-Jamaican exploded with another energetic burst: landing knees, a spinning backfist and more good work when striking in the pocket.

He even landed a takedown, but it was quickly nullified by Luque though. Vicente connected with a devastating knee before landing hammer fist punches.

Although there were initially questions over whether the knee was in-fact legal, replays showed it was – he noticed Brown’s hand was going down and quickly let fly.

Statistic: Only Matt Brown (13) and Matt Hughes (12) have more finishes in UFC welterweight history than Luque’s 11. He also ties Thiago Alves (8) with knockouts.

@VicenteLuqueMMA such a calculated killer. One of my favorite modern fighters! Congratulations

He said he’s been constantly improving, doesn’t want to receive too much damage and admitted it wasn’t exactly the perfect display but still felt he delivered an exciting fight.

Then, he called out #12 ranked Nate Diaz (20-12) and said their fighting styles would make for a “banger of a fight”, his words, not mine.

After two fights in a three-month span, he’ll probably want to return sooner rather than later and probably duel again before 2020 is over.

Whether or not he’ll get his wish against Diaz though, remains to be seen. 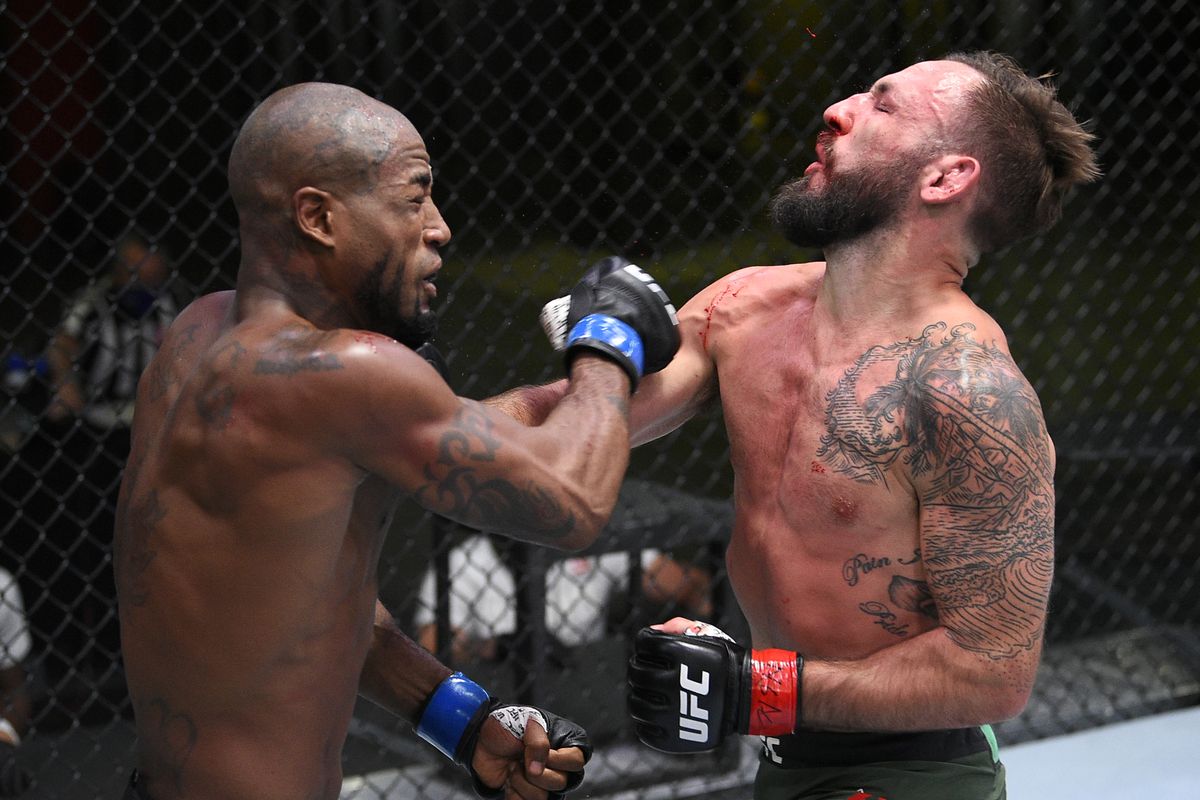 This was a back-and-forth affair, but one that went Green’s way after assertive strikes

This UFC Vegas 5 main card started with a rematch three years in the making between lightweights Lando Vannata and Bobby Green.

Green earned the victory with a commanding result on all three judges’ scorecards, before shouting that he just paid for his family and his house with the UD win.

To casuals, perhaps that admission is melodramatic from the 33-year-old. But this is also a man who retired after losing to Drakkar Klose in December 2018, came back and lost against Francisco Trinaldo last December and is now on a two-fight win streak.

It’s the first time he’s done that since 2014 and after continued success when fighting in the pocket, he edged all three rounds in terms of striking numbers.

They earned Fight of the Night honours during their initial fight at UFC 217 (Oct. 7, 2017) and received the same accolade here too after 15 minutes of nonstop battle.

“When you have a draw, you have to solve it – that [this victory] means I’ve won both. I fractured my hand in the Clay Guida fight, this is for my children if they see this one day – just know that I’ve been through every emotion to get here, but I’m here.”

A middleweight clash, Kevin Holland versus Trevin Giles, was cancelled moments before the bout, after Giles fainted and health officials backstage deemed him unfit to fight. He was assessed before going to hospital shortly afterwards.

In the night’s featured prelim bout at catchweight (140.5lbs), Jonathan Martinez was victorious via a third-round TKO (knee and punches) against Frankie Saenz.

During the post-fight interview, the 26-year-old bantamweight apologised for missing weight. This was the first time it’s happened in his career, promising it’d also be the last.

He enjoyed a striking clinic at times against the 39-year-old veteran – who made his first appearance since March 2019 – and struggled to really contend with him after R1.

Before that, there were two UD victories in the featherweight division. First, Jamall Emmers defeated Vincent Cachero with 30-27 scores on all three judges’ scorecards.

Then, Nathan Maness eased to beat late replacement Johnny Munoz, with all judges scoring the contest 29-27 after the newcomer – with a 10-0 record entering this encounter – was deducted a point in R3 and could have no complaints after repeated groin strikes.

To kick off the card, unranked bantamweights Chris Gutierrez and Cody Burden begun this nine-fight card with a unanimous draw (28-28) on all three judges’ scorecards.