Fulham left Brentford looking silly at Wembley last night, but Thomas Frank’s side only had themselves to blame after their promising season ended with a whimper against their west London rivals. It extends a very long wait for Premier League football, while finishing the campaign with plenty of burning questions to answer.

There were multiple moments you could pick out from a nervy, fairly drab final that didn’t manage to truly alight until extra-time. 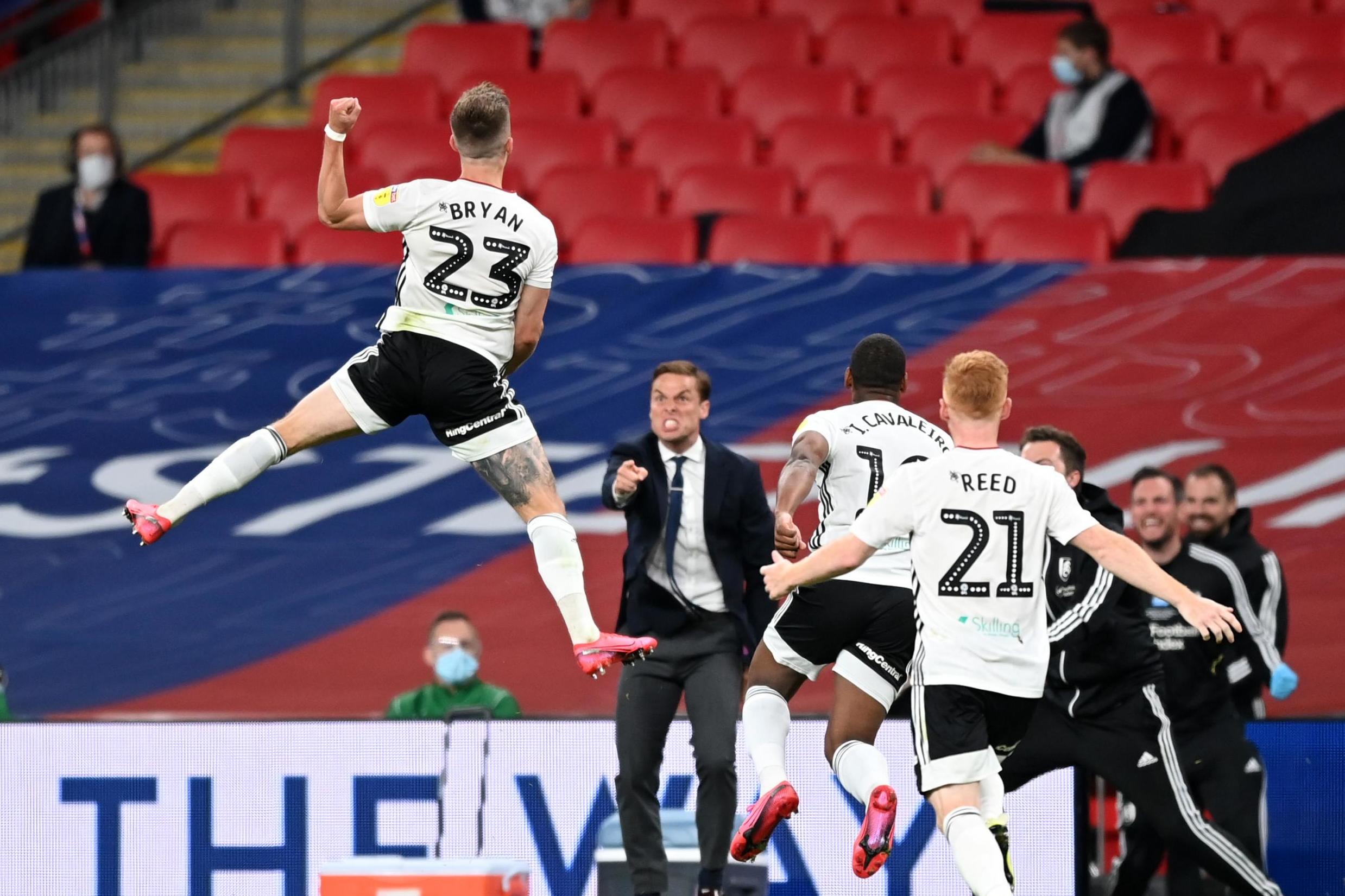 What about his second goal, an overlapping run that seemed to continue forever?

The individual duels between Ollie Watkins and Michael Hector?

Watkins (left) was forced to feed off half-chances throughout, against a determined adversary

Aleksandar Mitrovic’s will he, won’t he deliberation on the touchline for far too long?

Said Benrahma’s display under the spotlight with multiple clubs watching?

Sergi Canos’ persistence and creativity from wide areas as a late substitute?

Too many to count. Fulham are back in the Premier League – Scott Parker’s hard work and persistence with an underrated crop of players has been thoroughly rewarded.

Fulham players celebrate with Parker after guiding hem back into the PL, first time of asking

Brentford, packed with individual talent aplenty, were firmly backed to cause a storm and potentially breach the Leeds-West Brom duopoly that threatened to dominate the Championship’s automatic promotion places last summer.

Since slamming five past Sheffield Wednesday on March 7, the Bees embarked on an impressive seven-match win streak once play resumed in mid-June.

Among their excellent results were gritty victories against Fulham and West Brom in quick succession.

It made their stumble at the final juncture all the more surprising, with consecutive defeats by Stoke and Barnsley – two relegation-threatened sides.

The Baggies also faltered late on and gifted Brentford opportunities to leapfrog them into an automatic promotion place. Leeds had clinched the title with two games to spare.

Swansea made it three defeats in a row, with a 1-0 semi-final first-leg victory at the Liberty Stadium on July 26.

Three days later in the second leg, Brentford blew the Swans away in a brilliant opening half against Steve Cooper’s side.

Their final match at Griffin Park, they played like a team on a mission as quick-fire goals from Watkins and Emiliano Marcondes saw them race into a two-goal cushion.

Their aggregate deficit? That was history. 3-1 on the night, they emerged (3-2, agg) unscathed and would face their closest league rivals – fourth-placed Fulham, in the summer’s showpiece event at an empty Wembley. How fitting.

The breakdown, questions that need answering

Canos cannot bare to look, is consoled by Frank at the full-time whistle

Fulham dominated possession but didn’t really create much in the way of big chances against a Brentford side who you felt would ease into proceedings as time wore on.

Tottenham loanee Josh Onomah came closest in the first-half, but Raya – one of Brentford’s best performers this season – was equal to both strikes.

It seems both typical and cruel that the Spanish goalkeeper found himself exploited for his aggressive tendencies when defending free-kicks.

Standing too far away from the near post, Bryan caught him out from long distance with a well-struck free-kick but it was clearly well-worked. It was clever, even if preventable.

Benrahma’s display was quite frustrating to watch. Here is a player linked with a number of Europe’s top sides, particularly a handful of Premier League teams.

There’s no bigger stage than Wembley, in a televised cup final fixture, no other competitions being played, to make your mark.

Instead, he channelled his inner Neymar – the ineffective, easily dispossessed one that struggled against Dortmund? Yeah, that one.

If you’ve watched the Algerian before, you’d be aware of his close-control dribbling.

The quick change of pace, an innate ability to leave defenders in his wake enroute to creating a goalscoring opportunity – ala Riyad Mahrez, for example.

But crucially, he lacked the cutting edge and felt obliged to go it alone too often here.

Mbeumo was replaced after the hour mark by Thomas Frank and could have no complaints in truth. He looked off-the-pace, ponderous while constantly struggling.

Is there a redemption opportunity with the current crop in 20-21?

Probably not. As previously mentioned, Benrahma is the talk of the town. Brentford sealing promotion would have gone a long way to securing his future, but they didn’t.

Watkins has an £18m release clause, which is remarkable and even during a pandemic, appears a bargain fee for a number of interested English suitors tracking his progress.

Mbeumo might feel he still has unfinished business after a disappointing display when it mattered most, not least as Frank regularly displayed renewed faith in his capabilities.

He’s still only 21, it’s important to add. Canos was their most effective forward in my eyes and he came on just before second-half stoppage-time, which speaks volumes.

9 – Brentford have now failed to earn promotion in all nine of their play-off attempts in the Football League – this is the most unsuccessful play-off campaigns of any side in English football. Cursed. #EFLPlayOffs #BREFUL pic.twitter.com/qTV0zfw99R

After all those long years of wait, frustration and hurt, Brentford’s search for top-flight football continues. They’ve been waiting since 1947 and only have themselves to blame.