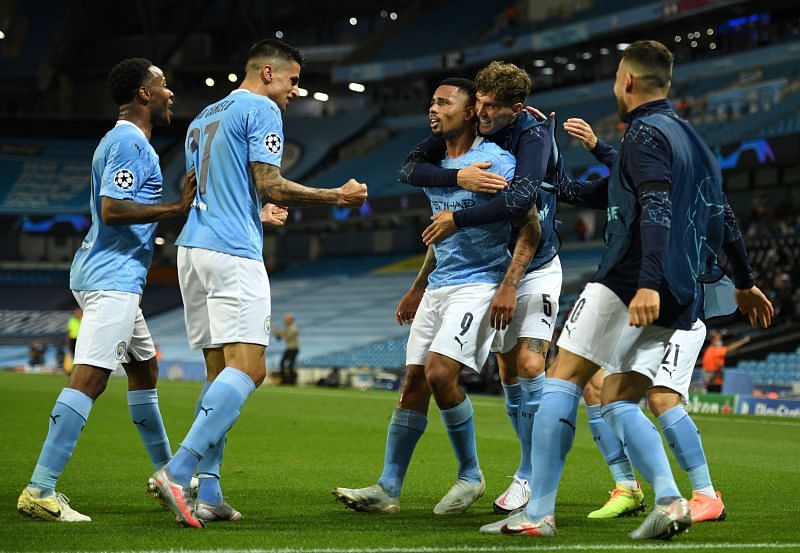 Raphael Varane’s catastrophic defensive errors will dominate headlines, but Manchester City were rewarded for their intense pressing from the front against La Liga champions Real Madrid. What were five talking points here, as Pep Guardiola’s men booked their place in next week’s Champions League quarter-finals? 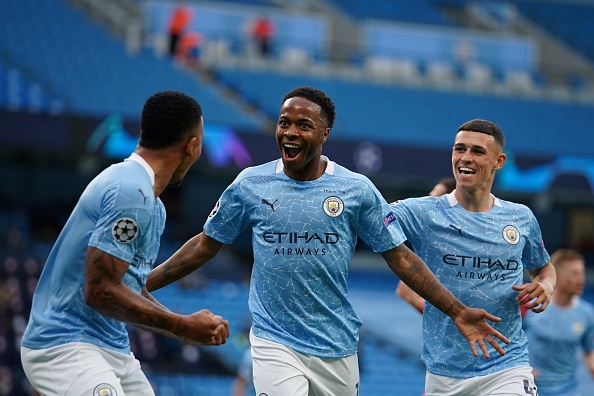 Karim Benzema levelled the scoring on the evening with a well-taken header in the first-half, but it proved a false dawn for Los Blancos – who started slowly and were punished.

5 – Karim Benzema has scored five goals in his last six appearances in the Champions League knockout stages, as many as he had in his previous 26 such appearances combined. Fore. #UCL pic.twitter.com/3xIcLe4AkE

While their suspended captain Sergio Ramos watched helplessly from the stands, his teammates crucially faltered against top opposition here.

City were unafraid to take risks and despite another intriguing team selection by Guardiola, his side could have had more than their two goals on the evening.

Thibaut Courtois made smart saves from Jesus and Sterling twice in the second-half, during an evening where his defensive teammates didn’t exude confidence.

2 – Raphael Varane is the first Real Madrid player to commit two errors leading to goal in a single #UCL game since at least 2007/2008 season. Lethal@ChampionsLeague pic.twitter.com/eDcxCU30Fv

Without further ado, here’s a look at five talking points from an intriguing 90 minutes where Manchester City have booked their place in Lisbon next week:

#5 Fernandinho in central defence: what about Otamendi-Stones? 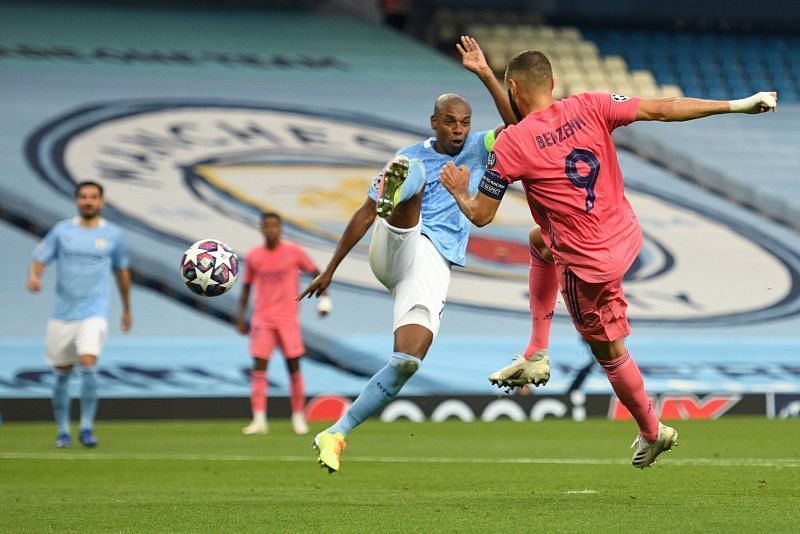 Fernandinho largely struggled against Benzema – understandably so, he’s not a central defender

Although he’s played there regularly this season, Fernandinho remains a defensive-minded midfielder and his new centre-back role was more necessity than choice.

Especially given Nicolas Otamendi’s dwindling form as well as persistent injuries to John Stones and Aymeric Laporte at different stages this season.

He played alongside the latter here and although far from a disastrous display, the 35-year-old looked out of place against Karim Benzema.

It’s to be expected, considering the Frenchman’s tactical nous and attacking capabilities, but also made you wonder why Otamendi-Stones – both on the bench – weren’t preferred.

Especially if you rewind back to their first leg victory, where Otamendi-Laporte was the starting partnership until the latter limped off with a first-half injury.

It’s fair to suggest Fernandinho no longer possesses the mobility to contend with a Modric-Casemiro-Kroos midfield trio, but starting him ahead of the aforementioned pair was a brave decision that worked well for Guardiola.

Laporte was busier (three clearances, two interceptions, one tackle and block) while involved in build-up play (completed nine of 11 long balls, 93% pass success) but with Nathan Ake’s arrival made official earlier this week, it raises questions.

Will one or both central defenders be departing Manchester City this summer? Eric Garcia rejecting a contract extension doesn’t bode well either, as far as the Citizens‘ options in that area are concerned. 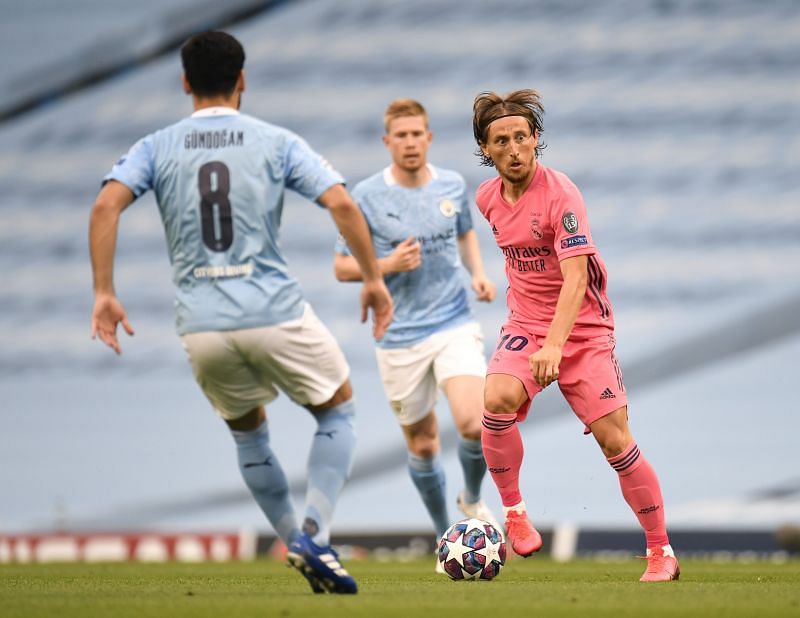 After an encouraging first leg display at the Bernabeu, Ilkay Gundogan would have been quietly expecting to start the return fixture.

But after a 163-day gap between the two legs, where the coronavirus pandemic suspended sport, domestic campaigns were eventually finished.

The German deep-lying playmaker didn’t exactly flourish during the resumption and so might have been less convinced about a starting berth here.

However, he did start and although he’s flattered to deceive a lot in big games – especially since signing his contract extension twelve months ago – he was among City’s best performers here in the biggest fixture of their season.

Typically confident in possession (60/63 passes complete, 95% accuracy), he was an ever-present threat.

Being able to dart through the middle third with freedom, Gundogan relished the chance to continually unlock a Real backline that were flagging with worrying frequency.

He wasn’t alone, either.

Kevin De Bruyne created five chances in the first half against Real Madrid, more than the entire Real team combined (4).

Only de Bruyne – who else – created more key passes (9) than his four over the 90 minutes, while he completed two successful dribbles and not shying away from his defensive duties either.

With two tackles, one interception and block, he didn’t lose a single ground duel against the likes of Luka Modric and Casemiro.

If he took some power off his second-half pass for Sterling in the area, he’d probably have an assist too – capping a quietly impressive display here.

#3 Golden boys Foden and Rodrygo start, but how did they fare? 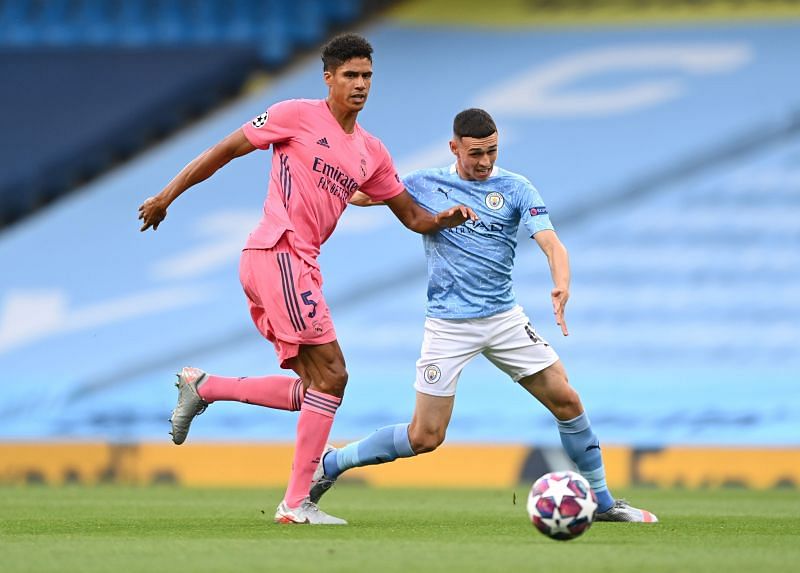 Foden tussling with Varane for possession, where he began in an unfamiliar false nine role

Given their age and relative inexperience in big games like these, it’s easy to forget both youngsters have earned this leap of faith by their respective managers.

Phil Foden, for example, has been excellent since the Premier League resumed in mid-June.

Meanwhile Rodrygo continues showing his eagerness and capability to battle for a starting spot as part of a Real Madrid side stacked with attacking options.

In the first-half, Foden was playing in an unfamiliar false nine role as Jesus – their first-leg catalyst – again operated down the left-hand side.

It was an awkward position for the creative midfielder, who ran a lot out of possession while trying to get the ball where possible to take advantage of the visitors’ sloppy start.

He flashed a promising shot wide and looked threatening upon occasion, though Rodrygo only needed a moment’s notice to showcase why he started ahead of Isco and Marco Asensio here.

Exposing Joao Cancelo’s poor positioning, he accelerated past him as if the Portuguese was a mannequin before delivering a pinpoint cross into the box.

Benzema made no mistake with a well-placed header in-between Rodri and Fernandinho, so suddenly after their lacklustre start, Real were alive again. 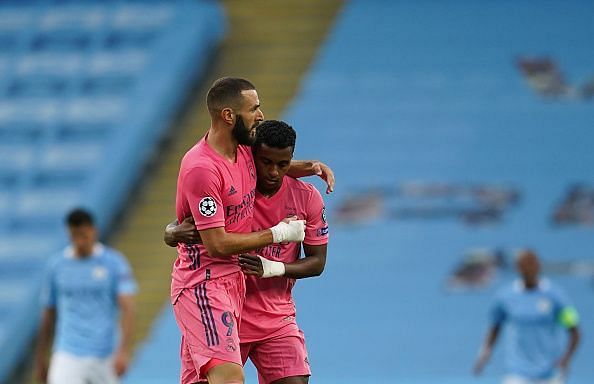 Benzema celebrates with Rodrygo, who left Cancelo for dead before fizzing in the cross

As previously mentioned, their inability to capitalise on such moments proved costly as time wore on.

However, Rodrygo couldn’t be blamed for lack of effort and made Cancelo’s defensive duties much harder than he would have hoped for.

He only had 19 touches before being replaced on the hour mark by Asensio, who Zidane felt could offer more in the latter stages.

One key pass aside, the Spanish playmaker was average at best from the bench – though City took control shortly after his arrival.

In the second-half, Pep made tweaks which saw Jesus playing more through the middle and Foden reverting to a more comfortable midfield role.

He combined with Gundogan to help create the aforementioned Sterling chance, while showing clever movement and awareness in tight spaces when looking to link-up with de Bruyne near the edge of the box.

Just like Rodrygo, Foden also didn’t last the full 90 – Bernardo Silva replaced him with little more than 20 minutes to play.

That said, neither did their blossoming reputations any harm during an entertaining match that City came out on top in. 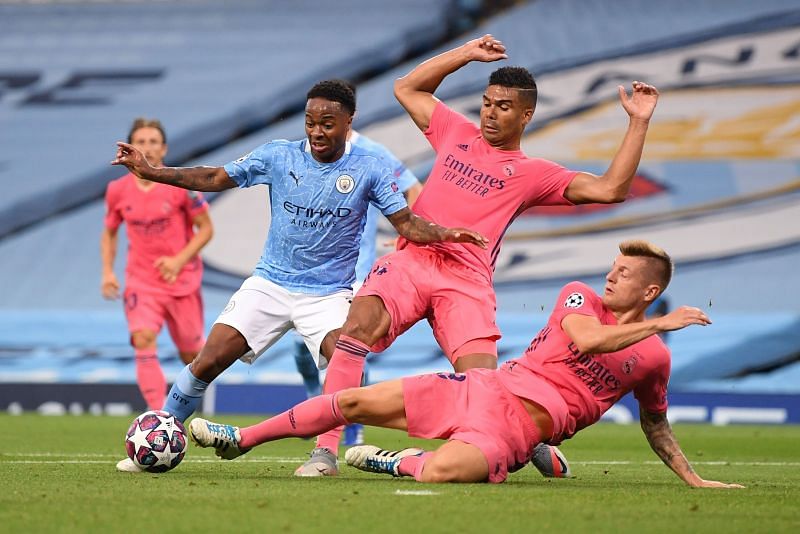 A lot will be said about Varane’s disasterclass performance here, but to single him out as the sole reason for Real Madrid’s demise would be disingenuous.

They were all poor in the first-half, but not by accident: City took the game to their visitors with relentless pressing, when it should have been the other way around.

Of all outfield starters, no player recorded a worse passing percentage than Casemiro’s 74% (29/39 complete).

He was dribbled past on three occasions, ponderous in possession and didn’t command respect as Real’s midfield lynchpin.

Toni Kroos started slowly but did okay as things progressed, while there were times when you forgot Luka Modric was on the pitch.

Collectively, they didn’t do enough to protect a backline that was missing its leader and this was obvious.

Varane will get the blame for a heavy touch in the build-up for Sterling’s opener, but Courtois put him in a world of trouble to begin with – passing backwards.

Militao was nervy at times but recovered well, though the same couldn’t be said for Ferland Mendy either, who has been largely impressive for Real this season.

Manchester City’s pressing from the front caused this. Jesus’ dogged persistence to seek out mistakes, Sterling’s situational awareness and Foden’s hard running did the trick in making Real uncomfortable, second-guessing their distribution.

As the latter came off after 67 minutes, just before Jesus’ goal, a graphic displayed his distance covered in comparison to his teammates.

Foden had run 9.21km during the game to that point, in contrast to a team-average of 7.74km.

Real conceded two easily preventable goals here, but City deserve credit for the way they forced such mistakes and should’ve had more too.

#1 Stark contrast between Varane and Militao in Ramos’ absence 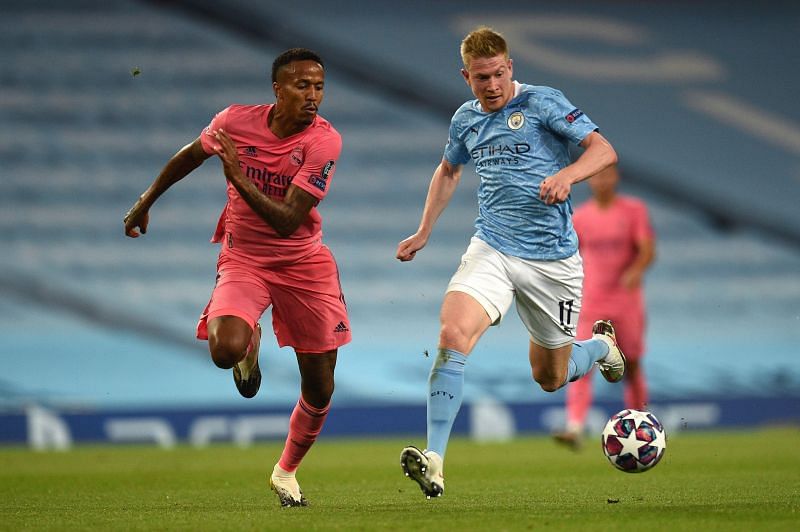 When previewing this match, it was important to highlight how Real coped with Ramos’ absence through suspension against Manchester City.

This is a team who, sure, endured a dismal Premier League title defence in 2019-20, but still managed to score goals for fun across all competitions.

So how would the Varane-Militao central defensive pairing fare against top attacking opposition?

With Sergio Aguero missing this tie through injury and Riyad Mahrez an unused substitute, they should reign supreme right? Wrong.

It’s easy to forget that Ramos, who turned 34 in March, also has his defensive shortcomings.

Jesus made him look ordinary at the Bernabeu in February, he was frequently out of position and needed to make last-ditch interceptions too often.

He was sent off late on, after committing a last man challenge as Manchester City broke through in search of a late third that would have essentially ended the tie.

Varane, a World Cup winner and five years Militao’s senior, was outshone by the Brazilian and not just because he didn’t make two glaring errors leading to goals.

They both started shakily but while one recovered, the other wilted under pressure and made mistakes that would have been lambasted in a non-league game.

Varane made three clearances, one block and interception here. The first error was the result of good pressing and a poor decision by Courtois, but the second?

It looks even worse with each replay. After being put under pressure by his goalkeeper in the first-half, why not just head the ball out? Or better yet, clear his lines altogether?

By contrast, Militao was impressive and kept busy as Real were progressively on the offensive in an effort to reduce arreas after Benzema’s equaliser.

With four clearances and tackles, five blocked shots, two interceptions and nine of 11 duels won, he showed exactly the type of performance you’d expect Varane to have deliver in Ramos’ absence.

He was unafraid to make mistakes and instead took them in his stride, with two impressive galloping runs up the pitch to push teammates forward.