#4 ranked heavyweight Derrick Lewis made UFC history with his second-round knockout against the evergreen Aleksei Oleinik, after Chris Weidman split opinion en route to his first victory in just over three years in the evening’s co-main event. Who else featured on an intriguing card from Vegas, seven days before UFC 252?

After beating Oleinik, Derrick Lewis has most knockouts in UFC heavyweight history 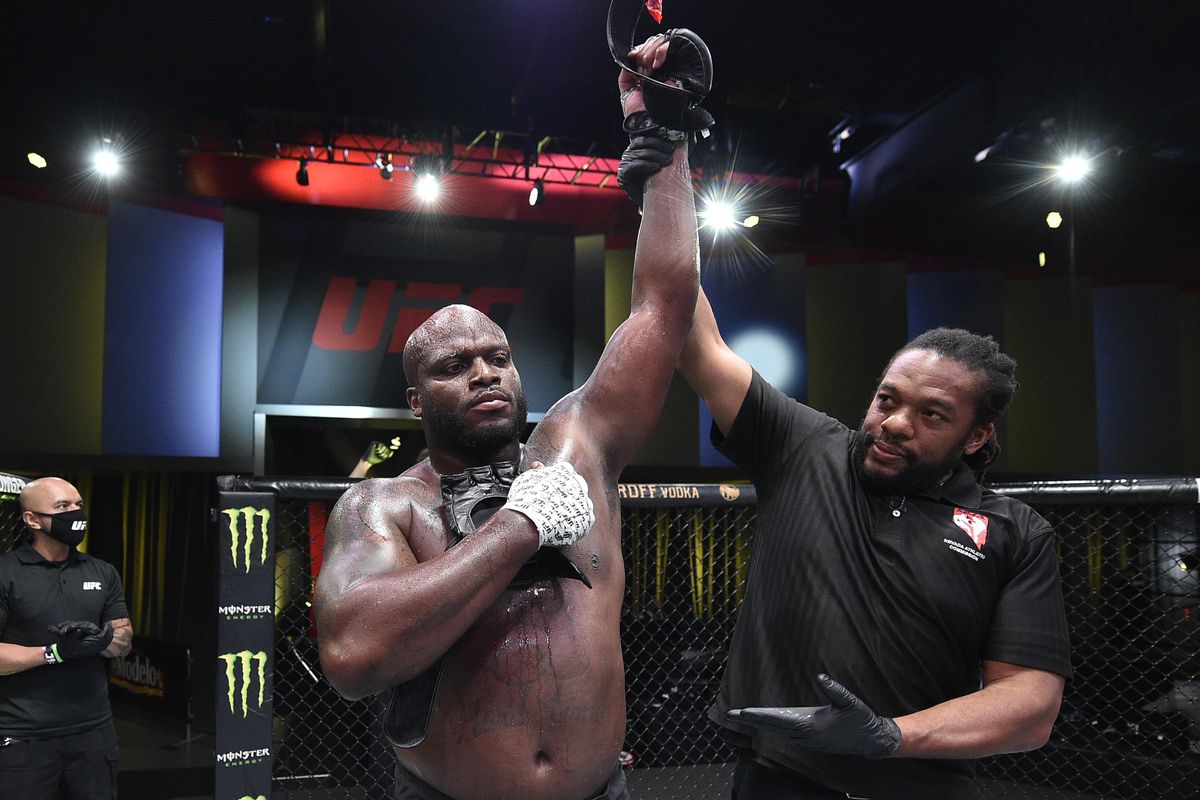 Lewis did what he came to do, though moments in R1 suggested he’d leave unconscious

#4 ranked heavyweight Derrick Lewis had to survive precarious moments late in the first round, but ultimately stood tall with a record-breaking knockout against Oleinik (#10).

With a nickname like Boa Constrictor, Aleksei has more than earned his fierce reputation for being a submission king over the past four decades.

The 43-year-old has been angling for tougher opponents.

He definitely got what he was asking for here against the Black Beast, describing him as “one of the world’s most dangerous guys“, pre-fight – which rather speaks for itself.

Both said this matchup wouldn’t last the full five rounds and with a whopping 46 first-round finishes in the Russian’s career, Oleinik was seconds away from no. 47 here.

“He had that British Bulldog, whatever the hell that was… it was tight, I couldn’t breathe at all! I’m glad the time ran out when it did.”

A typically frank admission by Lewis afterwards, as he survived a very tight hold in the latter stages of R1 before coming out all guns blazing to start the second.

The bell sounded. Flying knee, a big right hand, ground-and-pound strikes followed and suddenly, all of Oleinik’s hard work from R1 was undone within 21 seconds.

Statistic: Lewis now has 19 knockout victories in his career, while surpassing both Cain Velazquez and Junior dos Santos for the most KOs in UFC heavyweight history. Now, only Vitor Belfort (12) has more finishes than him across all divisions all-time in the UFC.

Afterwards came more honesty from the 35-year-old, who wants to cut more weight before hopefully fighting again in December.

With Cormier-Miocic 3 next weekend, Francis Ngannou (#2) sitting out and Curtis Blaydes (#3) flattering to deceive, it’ll be interesting to see what’s in store next for Lewis.

Pre-fight, he said he needed to make a statement that the All-American is back and putting the middleweight division on notice.

Fought at a gruelling pace, this was far from an electrifying display and didn’t do much in the way of convincing many critics – me included – that he’s ready for such a push.

But importantly, Weidman got the job done. It was his first since July 22, 2017 where he handed #8 ranked Kelvin Gastelum his third UFC defeat.

After successive wins, Gastelum is currently on a three-fight losing streak and served a five-month suspension in the meantime, while Weidman’s only fought twice since then.

It rather speaks volumes for a man who, at 36, doesn’t have much time left to be dithering on the sidelines.

Considering he was unranked pre-fight, he needs to be more active and battles like these don’t exactly help answer whether he’s still capable of flying back up the rankings.

This was grappling galore against the #11 ranked Akhmedov, who was immediately put under pressure but made necessary adjustments and came out firing in R2. 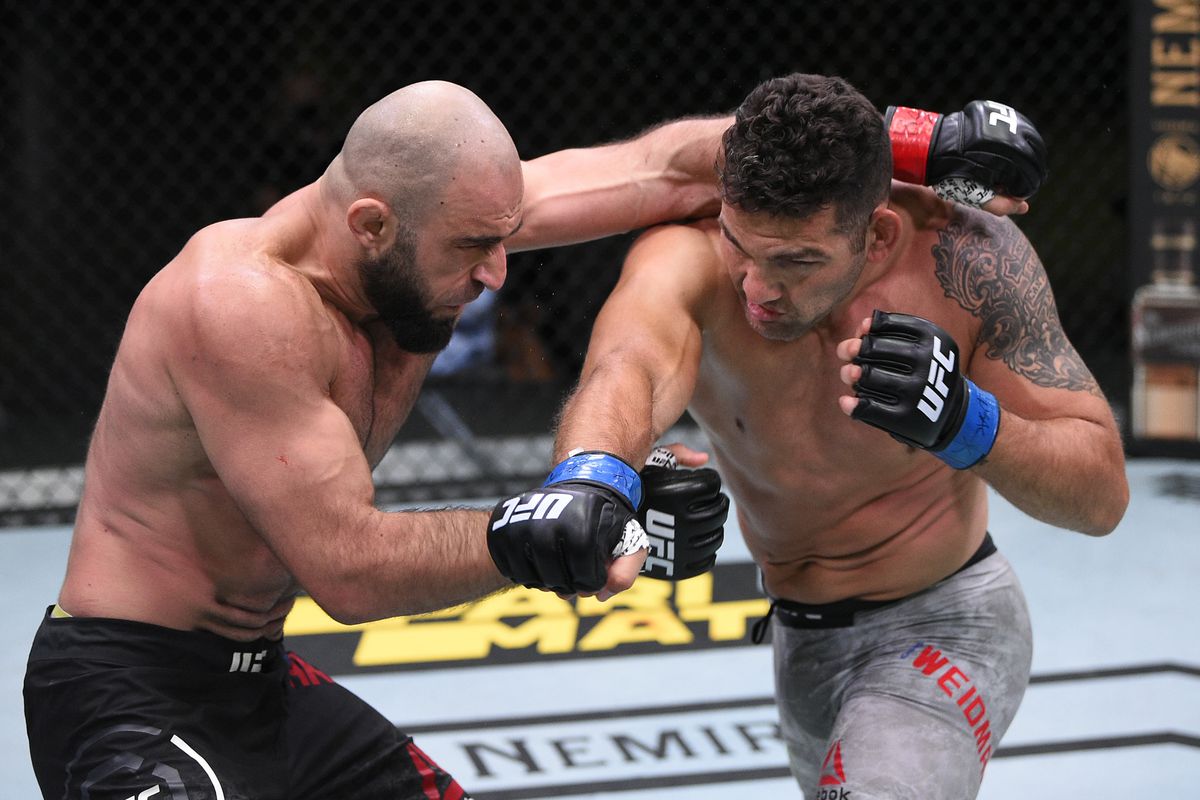 Akhmedov was more comfortable in an improved R2 showing, but couldn’t sustain it

Weidman’s insistence to constantly shoot for takedowns (5 of 16 successful) took its toll physically on both athletes, who looked laboured at times on the ground.

Akhmedov defended those takedown attempts much more efficiently in R2 while earning some of his own, though Weidman’s corner knew it was level after ten minutes.

So after absorbing 32 total strikes (25 significant) in the previous round, Weidman needed urgency and went to work on his ground game again. Securing the first takedown of R3 proved pivotal as he was able to control the tempo, keep Akhmedov where he wanted him while nullifying an opponent who was growing in confidence.

He said the win was huge as there was plenty of pressure on his shoulders.

Unsurprisingly, he wasn’t happy with the performance and would have much preferred a knockout or submission finish but at the very least, this shows he’s not finished yet.

However, I’m unconvinced he beats #7 ranked Derek Brunson or Uriah Hall (#9) and no-one needs to see a Gastelum rematch right now. Who else is there for him in the top ten?

Admittedly, I found myself distracted by one of Stewart’s very vocal cornermen, but his insistence on forward pressure and positive reinforcement quickly made sense.

After a feeling-out process between the pair, Stewart narrowly edged the significant strikes (13-12) but absorbed some stinging shots too.

Within a flash though, the fight was over.

Pitolo’s spinning backfist came up short, Stewart engaged with him near the cage and just as Maki instinctively took him down under pressure, that manoevure allowed the 29-year-old Englishman an opportunity to pounce with a guillotine choke attempt.

Seconds later, he wheeled away to call for the tribute shirt (shown above), having sunk in the submission so tightly that Pitolo had no choice but to tap out.

It’s his first victory by submission in his seven-year career to date and after losing to Bartosz Fabinski in March, he returns to the win column with minimal damage.

He dedicated the victory to his friend – who was tragically killed on July 11 – and understandably had a lot to say about things post-fight.

It included conditioning, taking this on short-notice, being prepared for another bout if it’s available, while also seeing visible improvements with his Brazilian jiu-jitsu coach.

“It was a lot man, I took it [the fight] on three weeks’ notice. I was 99kg [when receiving the call to fight], he [his friend Jahreau] was murdered by his brother on his 30th birthday and this whole year has been crazy.

I’ve been doing a lot of takedown defence, working a lot with my BJJ coach Michael Russell. I’m good to go, it depends on how much time they give me [to recover].”

It wasn’t the matchup she prepared for, but #8 ranked woman’s bantamweight Yana Kunitskaya avoided a potential upset against returning veteran Julija Stoliarenko.

This was a gritty, clinch-heavy fight that awaited Stoliarenko, making her first UFC appearance since November 2018 against a very difficult opponent.

In her defence, she responded defiantly when under pressure and was determined not to fold against Kunitskaya – who only intensified her striking as time wore on.

Boosted by intelligent cornerwork from boyfriend and #2 light-heavyweight contender Thiago Santos, Kunitskaya was dominant in the clinch. The stats speak for themselves.

She landed 209 of 254 total strikes (82%), with 92 of those coming in R2. Stoliarenko by contrast, only connected with two punches across the same five minutes. Whichever way you look at it, a 10-9 round doesn’t do those numbers justice.

Originally slated to face #7 ranked Ketlen Vieira here, the Brazilian was removed and subsequently replaced due to visa issues.

She’ll face #10 ranked Marion Reneau on Sep. 12, so it’ll be interesting to see whether the 29-year-old emerges victorious there – the pair could eventually fight before 2020 ends. 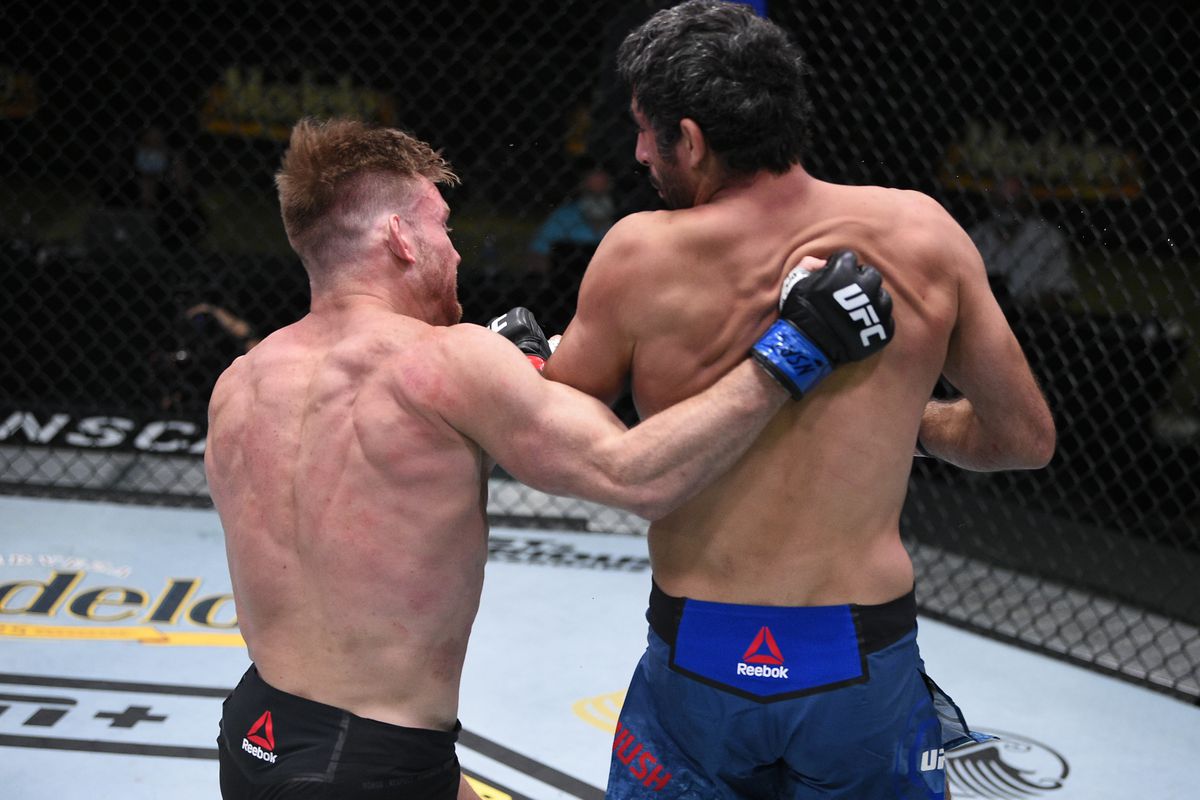 Although he came in overweight (2lbs) against Scott Holtzman, #14 ranked lightweight Beneil Dariush extended his win streak to five with an impressive first-round KO.

He wasn’t distracted by two eyepokes and an accidental low blow by the Tennessee-born fighter, as they battled intensely in the clinch for a while.

Eventually they broke, but Holtzman must have wished they didn’t. Dariush landed two nasty knee strikes before teeing off with a string of punch combinations.

Holtzman went into survival mode and although the fight went to the ground momentarily, Dariush continued mixing up his shots with increasing success before ultimately ending the evening courtesy of a brutal but beautiful spinning back elbow.

A potential battle against #11 ranked Islam Makhachev or Gregor Gillespie (#12) would be an intriguing watch, if they could get it scheduled before the end of the year.

On a seven-fight prelim card, there were contrasting R3 victories for middleweight Kevin Holland and Youssef Zalal among others. Holland was scheduled to feature on last week’s Brunson-Shahbazyan main card but Trevin Giles fainted just before the walkouts.

He ended promotional newcomer Joaquin Buckley‘s hopes of a debut victory with a beautiful punch TKO which finished things 32 seconds into the third and final round.

The latter meanwhile, had a quick turnaround after a solid UD victory during the Poirier-Hooker prelims on June 27. This win was significantly more comfortable too (30-26, 30-26, 30-27) during a featherweight bout against Peter Barrett.

“I had a lot of things to prove to myself from that last fight.

I don’t know if you saw me in the corner talking to the coaches, I really didn’t listen [against Griffin], it kinda messed me up. I’m young, learn everyday and every fight so did a lot better. I’m happy with that but wish I got a finish.”

Other results were as follows…

After a ten-month layoff, middleweight Andrew Sanchez wasted no time and returned to winning ways against Wellington Turman, with a R1 KO after four mins, 14 seconds.

Featherweight Gavin Tucker earned a R3 submission win via rear-naked choke against Justin Jaynes. The 34-year-old is now 3-1 in the UFC, since his debut in February 2017.