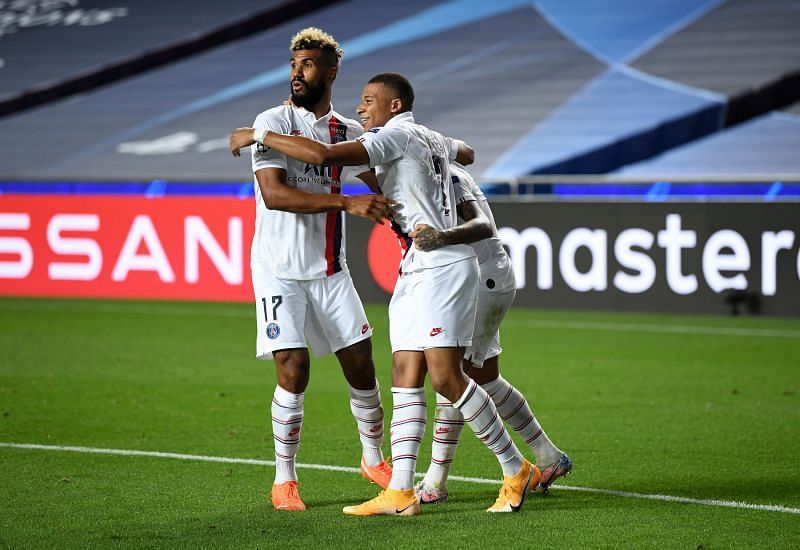 Their mental strength was questioned, some suggested it was arrogance, others described it as being weak or psychologically challenged. Yet, PSG became the first team to book their place in this season’s Champions League semi-finals after a remarkable stoppage-time comeback against an admirable Atalanta display.

Parisiens leave it late, but come up clutch at Atalanta’s expense

Goals from an unlikely source – Marquinhos and Eric Maxim Choupo-Moting – saved Thomas Tuchel’s blushes as well as that of Neymar after a frustrating display seriously threatened to see them crash out of Europe’s elite club competition for another year.

Instead, they’ll now play either RB Leipzig or Atletico Madrid after earning their first semi-final berth since 1995 for a place in next week’s showpiece event from Lisbon.

Billed as a clash between two of Europe’s highest-scoring sides, it was the Serie A high-flyers who opened the scoring in the first-half.

Sustained pressure and warning signs were seemingly ignored by a lax PSG defence, as Mario Pasalic scored his 12th goal of the campaign with aplomb.

The former Chelsea midfielder reacted quickest to slam home beyond Keylor Navas after Presnel Kimpembe’s attempted interception inadvertently teed him up instead.

It took Kylian Mbappe’s introduction to prompt a more prominent attacking response in the second-half, though his minutes’ restriction through injury wasn’t ideal.

He too missed chances as Atalanta sat ever deeper, looking to retain their one-goal advantage with time continue to tick down.

Choupo-Moting played a pivotal role in the build-up to PSG’s equaliser, as Neymar fed the ball into Marquinhos – tapping it in off Caldara during a frenzy in the six-yard area.

Then, Neymar and Mbappe combined before the latter squared the ball across goal for Choupo-Moting, who was on hand to slot home a dramatic stoppage-time winner. 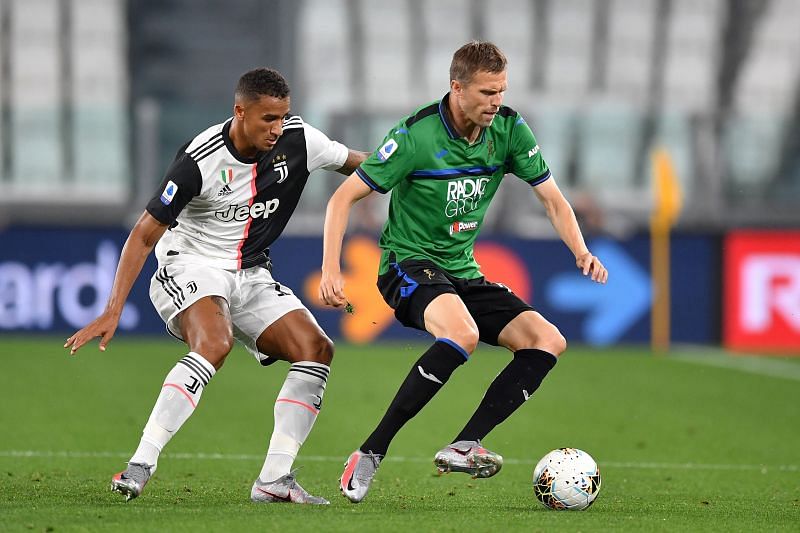 Despite an impressive comeback win over Borussia Dortmund pre-pandemic, it’s fair to say that PSG have had a distinct lack of luck since then.

Kylian Mbappe, who was largely a motivated spectator during their 2-0 win on March 11, would be doing the same here.

He sustained an ankle injury last month after a heavy challenge from Loic Perrin during their French Cup Final and despite being named among the substitutes, Tuchel revealed his inclusion would be limited to just 30 minutes.

Verratti’s calf injury was worse than first feared and they expect to be without the deep-lying midfielder for the remainder of this quick-fire competition.

Angel di Maria was out through suspension, meaning Pablo Sarabia was granted his first Champions League start of the campaign in their biggest fixture.

It doesn’t get more high-pressure than that, while Dortmund’s new signing Thomas Meunier and Benfica recruit Edinson Cavani were also both unavailable for selection.

Atalanta weren’t without their own issues either.

Josip Illic, who has scored 21 goals and created nine more across all competitions in 2019-20, missed out through personal reasons after being granted permission to travel to his native Slovenia earlier this month.

5 – Josip Iličić is only the third player to score 5+ goals over two legs of a Champions League knockout tie, after Lionel Messi for Barcelona vs Bayer Leverkusen in 2011-12 (6) and Cristiano Ronaldo for Real Madrid vs Bayern Munich in 2016-17 (5). Influential. pic.twitter.com/a6bcZtgVSO

The 32-year-old has been a revelation over the past twelve months, with this campaign being his best-ever scoring season. First-choice goalkeeper Pierluigi Gollini was also sidelined for this fixture after being diagnosed with a knee ligament tear. 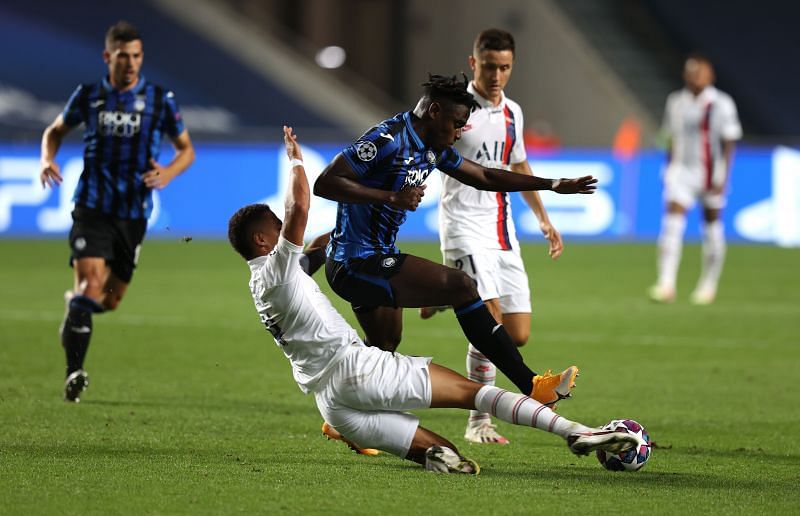 In the thick of things: Silva still had to play his part defensively en route to a dramatic PSG win

If they lost here, it would officially mark the last time he would be doing the whole pre-match routine as PSG captain, as the highly-experienced Brazilian defender will depart this summer after eight years in Paris.

He turns 36 next month and with the Ligue 1 champions seemingly unwilling to provide him extended terms on his current contract, the one-legged Champions League ties feel like a necessary finale to a busy stint for him in France.

Starting alongside Kimpembe, as he’s done on multiple occasions previously this term, he looked comfortable and assured – despite some early warning signs.

Although his defensive responsibilities were virtually over after Mbappe’s introduction changed the game’s shape, he didn’t rest on his laurels and that was important considering Atalanta’s counter-attacking abilities.

He made four clearances, two interceptions and tackles while winning six of eight duels contested with 88.1% pass completion (52 successful passes).

Kimpembe often ventured forward to apply pressure out of possession, which had mixed success, so it may have felt like he was the busier centre-back on TV.

However, Silva was typically dependable before pulling up with cramp late on – unsurprising considering the amount of distance he’d had to cover at the back.

Thilo Kehrer delivered a decent shift at right-back but Tuchel will hope that cramp is the only issue for Silva to recover from, ahead of next Tuesday’s semi-final. 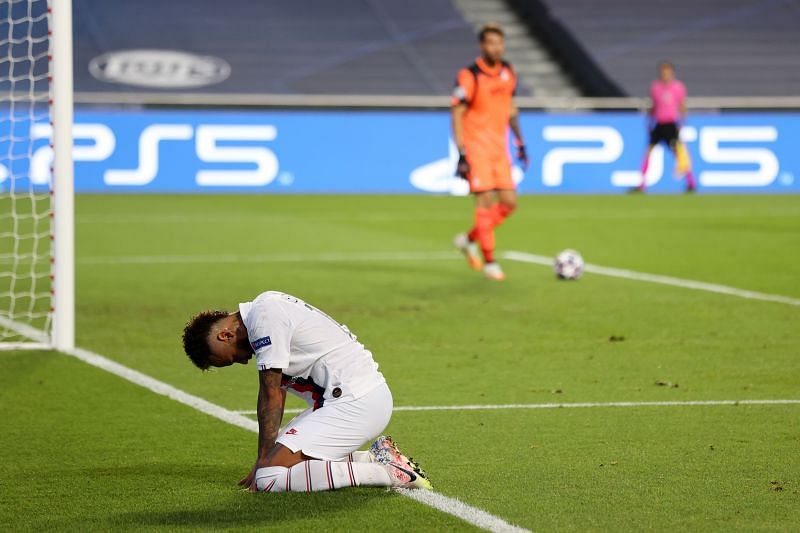 Despite flashes of individual brilliance, Neymar struggled with his finishing throughout

Without running mate Mbappe for company in the final third, Neymar felt compelled to again be the matchwinner, just like he was against Dortmund five months ago.

Three minutes in, he could and should have broken the deadlock.

Icardi’s timely interception in transition saw the ball break free for him on the counter, with only the goalkeeper to beat.

He ultimately skewed his effort well wide of the far post and judging by the bench’s reaction, they knew how much he should have scored too.

Thomas Tuchel cut an exasperated figure on his pitchside ice cooler after another promising move broke down, as Neymar’s purposeful run forward was ultimately followed by the ball trickling harmlessly wide of Marco Sportiello’s far post.

Mauro Icardi’s movement was both baffling and didn’t provide the Brazilian with an option in the box to really aim for, but he still should have improvised better than he did.

Naturally, he proved what he can do with the ball at his feet in full flow just before the half-hour mark.

He effortlessly skipped past goalscorer Pasalic, before proceeding to slalom his way towards Atalanta’s area and fire narrowly wide from distance.

The commentators continued to bemoan Neymar’s lack of help in Mbappe’s absence, as Sarabia and Icardi didn’t exactly exude confidence and were making defending fairly routine for a determined Atalanta backline – protecting a lead by this stage.

So when Mbappe did finally come on, things changed for the better and Neymar suddenly found himself with a reliable partner to dovetail with. His wasteful finishing continued and the decision-making remained frustrating at times.

However, the pair combined to create Choupo-Moting’s winner and Neymar created his third Champions League assist of the campaign for Marquinhos’ equaliser just beforehand.

Neymar was named man of the match tonight. He gave his trophy to Choupo Moting! pic.twitter.com/trl14grLnw

With 16 successful dribbles, five key passes and 25 duels won – as well as a whopping nine fouls suffered – those final few minutes were a perfect representation of Neymar turning perception upside down after a divisive evening.

#2 Atalanta were good value for their lead 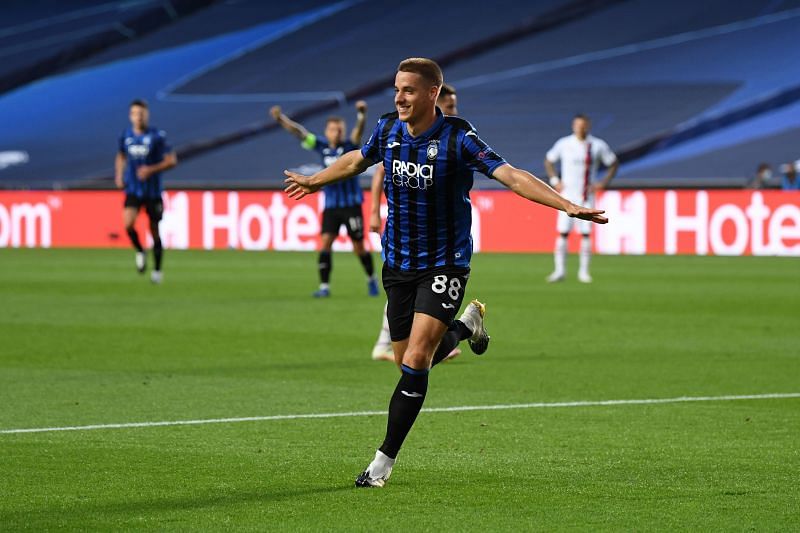 Pasalic celebrates his opener against PSG, on a night where their UCL dream was cruelly ended

Keylor Navas was definitely more busy than he would have liked to be in the first-half, making important saves to tip away Hans Hateboer’s eader before thwarting Mattia Caldara’s goalward effort from creeping into the bottom corner.

Although the latter was ruled a marginal offside, the former Real Madrid goalkeeper wouldn’t have known and he rightly shouted at his sleepy backline to wake up.

They didn’t heed his passionate warning and instead, Atalanta were growing in increasing confidence – Hateboer was first to every ball, while captain Gomez relished getting on-the-ball wherever possible to create an opportunity.

So, when Pasalic broke the deadlock, the finish didn’t come as much of a surprise.

Kimpembe’s attempted interception on Zapata inadvertently teed up the former Chelsea midfielder, who curled his strike towards the top corner and away from Navas’ dispairing dive.

Not content with their one-goal cushion, Atalanta still had chances to add to their lead – while doing their utmost to frustrate Neymar, taking it in turns with persistent fouls.

Albanian centre-back Berat Djimsiti came close on two separate occasions, one in each half, before being replaced on the hour mark for José Luis Palomino.

Gomez seemed to be struggling with a niggling knock and was replaced by midfielder Ruslan Malinovskyi as Gian Piero Gasperini made a double substitution.

However, Tuchel’s Mbappe admission was proven true and the World Cup winner’s presence off the bench went a long way to helping PSG intensify their pressure late on. 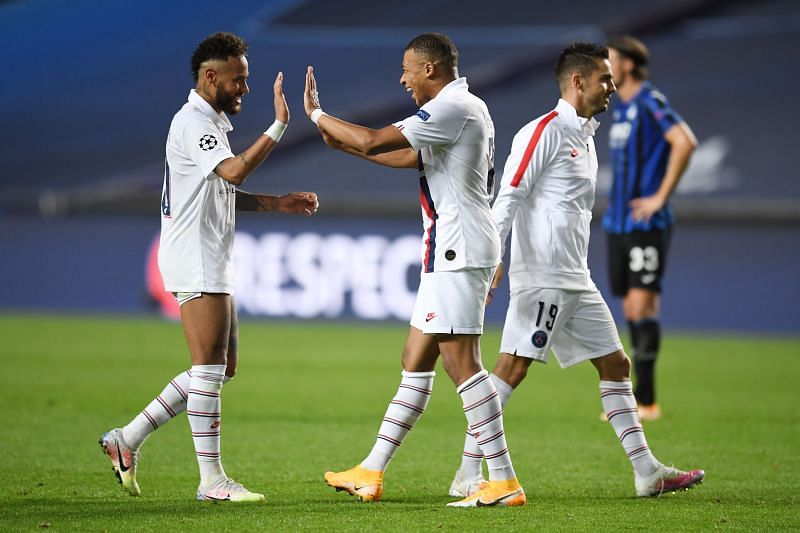 Neymar and Mbappe celebrate at the full-time whistle as PSG left it late to win 2-1 vs. Atalanta

Just like during the last-16 first leg against Borussia Dortmund, PSG only had themselves to blame for being behind in a fixture of such magnitude.

Even with a depleted starting eleven, it felt like Neymar against the world at times and that’s usually not a good omen when he can be frustrated so easily.

Atalanta’s backline were more than happy with their attempts to marshal him, forcing the Brazilian into deeper areas and doubling up when he had possession.

Sarabia and Icardi were both quite ineffective, so Mbappe’s introduction prompted a different sort of dilemma for the Italians to ponder.

Armed with flashy flicks, intelligent movement and a blistering turn of pace – despite not being 100% – Kylian stretched the game while PSG continued to probe for an equaliser.

Tuchel made a double substitution as PSG’s Gueye-Herrera holding midfield axis were replaced by more creative playmakers in Julian Draxler and Leandro Paredes.

The latter’s first meaningful contribution was an outside-of-the-boot pass which teed up Mbappe in transition down the left-hand side.

Although Sportiello was equal to the strike, this proved a step in the right direction as far as PSG’s creative outlets were concerned.

Neymar continued to threaten as usual but crucially, his decision-making and ability to strike cleanly had evaded him.

Time ticked down and frustrations grew, as Icardi was replaced by Eric Maxim Choupo-Moting and Palomino made a goal-saving tackle to partially block Mbappe’s promising one-on-one effort.

Choupo-Moting, Draxler and Neymar all had chances flash wide before PSG’s mental toughness and questions over a potential psychological block intensified as the match ticked towards the 90-minute mark.

Although neither provided the finishing touch, the Neymar-Mbappe combination play was key in the final third as Atalanta’s hearts were broken by unlikely heroes late on.

The PSG pair created assists for Marquinhos and Choupo-Moting respectively, to fight another day in an unpredictable Champions League campaign.