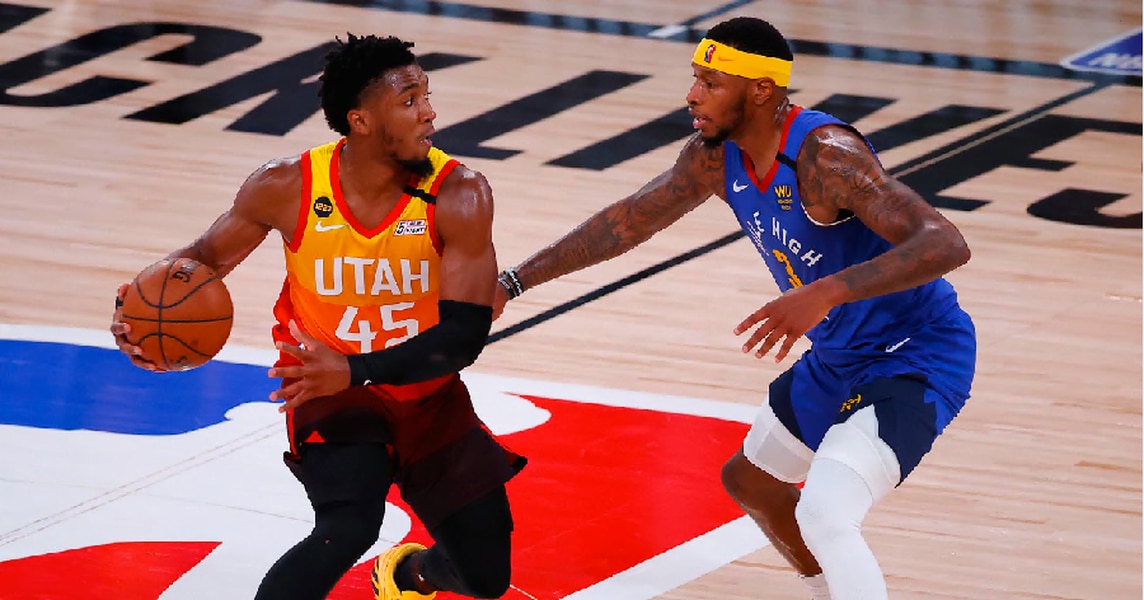 After going 3-5 in the bubble, Michael Malone will expect an improved display from his Denver team – who won a gruelling 2OT battle against Utah on August 8. The Jazz are increasingly short-handed as the postseason begins, but they’ll use this as motivation to prove critics wrong here. Who will emerge victorious in Game One?

Denver Nuggets vs Utah Jazz: Can the Mitchell-Gobert tandem prevail?

Utah are without Bojan Bogdanovic (wrist) after his successful surgery in mid-May, while point guard Mike Conley left the bubble yesterday for his son’s birth.

They won’t dwell on either absence and instead use that as added fuel to prove doubters wrong, but just how much will they miss the combo against tricky opposition here?

Only 1.5 games separate the third and sixth seed in an uber-competitive Western Conference, but a Nuggets-Jazz playoff matchup poses plenty of questions for both.

Will Denver freeze under pressure? Can Donovan Mitchell be efficient with his scoring and lead Utah past the first round here?

Much more besides, but it’s clear the Nuggets are favourites to prevail in a potential seven-game series that will stretch Jazz’s depth.

Or, lack thereof. Besides Jordan Clarkson’s bench production, Quin Snyder lacks many bonafide options he can rely on.

That could see a substantial increase in his starters’ minutes, which isn’t always good as far as playoff basketball is concerned. 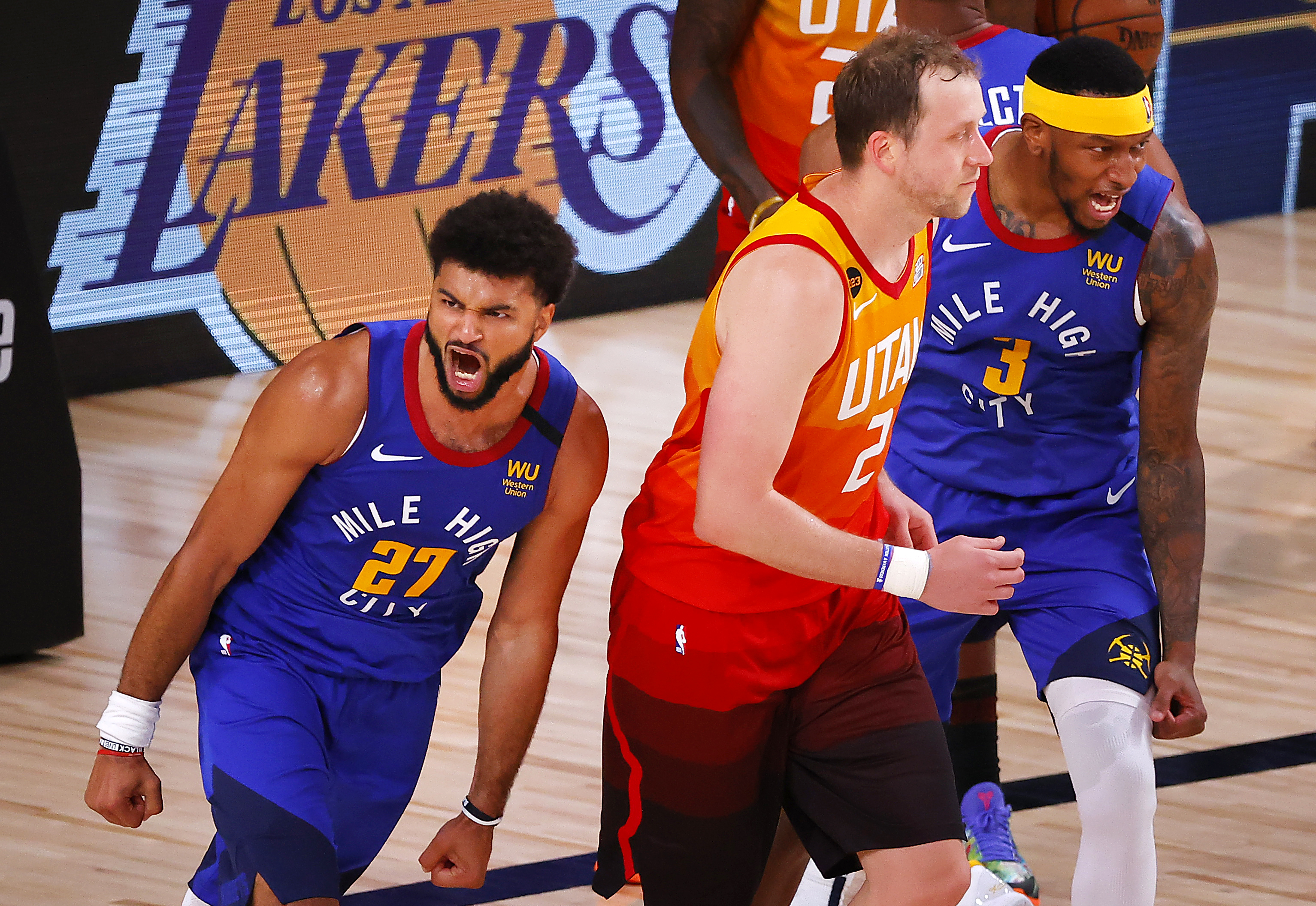 Murray (far left) celebrates during Denver’s 2OT win vs. Utah, where he was pivotal in his return

It’ll be interesting to see how Murray responds here, having been gradually eased back into action after nursing a hamstring injury.

He made a winning return and played a pivotal role in the aforementioned Jazz victory: scoring 23 points, with 12 rebounds and eight assists.

His shooting was streaky in last year’s playoffs, but he’ll need to be more efficient to help All-Star center Jokic as Utah will look to stifle any potential combination play between the pair. 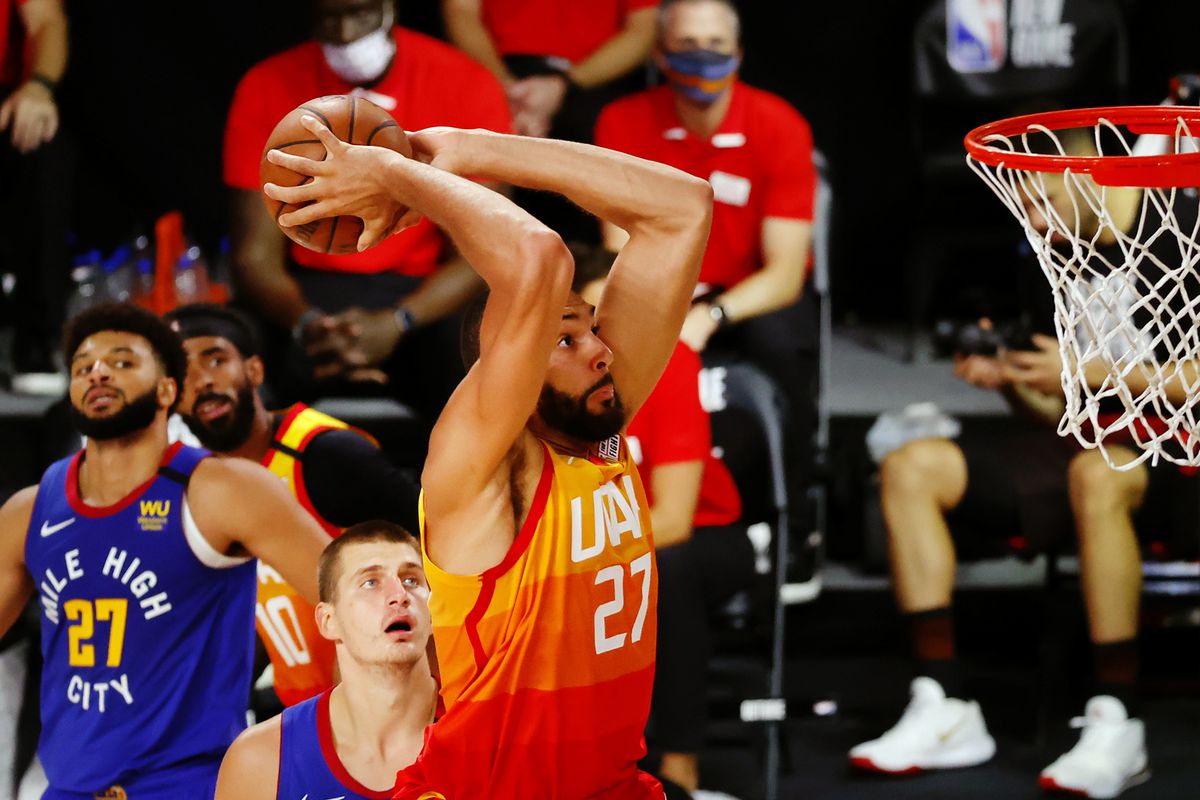 Gobert has dominated in the paint as usual, but will need to deliver an efficient display here

The scoring onus will be on Mitchell in a big way, especially with veteran point guard Mike Conley departing the bubble for his son’s birth yesterday.

However, to make his job easier, there must be an increased effort on both ends by his All-Star teammate Gobert. Averaging 15 points and 13.5 rebounds per game this term, the Frenchman’s defensive abilities aren’t a question.

He’s in the running for a third successive DPOY accolade, but his offensive game can often leave a lot to be desired. If he can be efficient from the field and deliver a typically dominant defensive display, the Jazz have a real chance of winning here.

Denver are undoubtedly favourites to win this contest, with a 61% win probability chance here according to FiveThirtyEight’s statistics.

Their 2OT victory perhaps goes a long way to explaining that, especially without Conley’s scoring. He had 20 points on 8-of-19 shooting, alongside six rebounds and five assists in 44 minutes that night – it still wasn’t enough.

Being the competitor he is, Mitchell will want to start quickly and atone for an inefficient display (12-of-33), despite scoring 35 points with eight assists and six rebounds that night.

Will it be enough though? Only time will tell.