Two match previews as the Oklahoma City Thunder aim to level their intriguing matchup against the Houston Rockets after winning an overtime thriller in Game 3 this past weekend, before an impressive Miami Heat team target a record-breaking series sweep at Indiana Pacers’ expense later on tonight. Who will win?

Thunder vs Rockets: Can Chris Paul lead OKC to level the series?

Danuel House’s missed free-throw with 9.5 seconds left proved critical, as the Thunder recovered late with less than a minute to play in regular time – before blasting the Rockets into submission with a 119-107 OT victory.

It adds extra spice to an already compelling first-round series between two sides with a point to prove for different reasons.

Ahead of tonight’s Game 4, there are multiple questions that need answering – will both sides shoot better from deep?

In Westbrook’s absence, who will step up alongside James Harden for Houston? Will OKC win back-to-back games? Or can the Rockets manage to restore their two-game cushion?

Harden had 38 points, eight assists and seven rebounds in 38 minutes before being fouled out, but that wasn’t enough as the Thunder rallied late to halve their series deficit on Saturday.

Houston’s next closest scorer was Jeff Green, who was considerably more efficient than his peers with 8-of-13 shooting, including a game-high five threes from the bench.

After a frustrating time in their successive defeats, Chris Paul recorded his highest scoring tally in Orlando to date (26 points on 11-of-20 shooting), while Shai Gilgeous-Alexander and Dennis Schroder were both impactful during a thrilling finale.

It’ll be interesting to see how the Thunder cope, should center Steven Adams (knee contusion) not feature.

Reports suggest he’ll be a gametime decision, much like Luka Doncic was yesterday.

He had a game-high 13 rebounds, alongside six points, two blocks and a block in 35 minutes. They’ll certainly miss his physical presence, should he not feature. 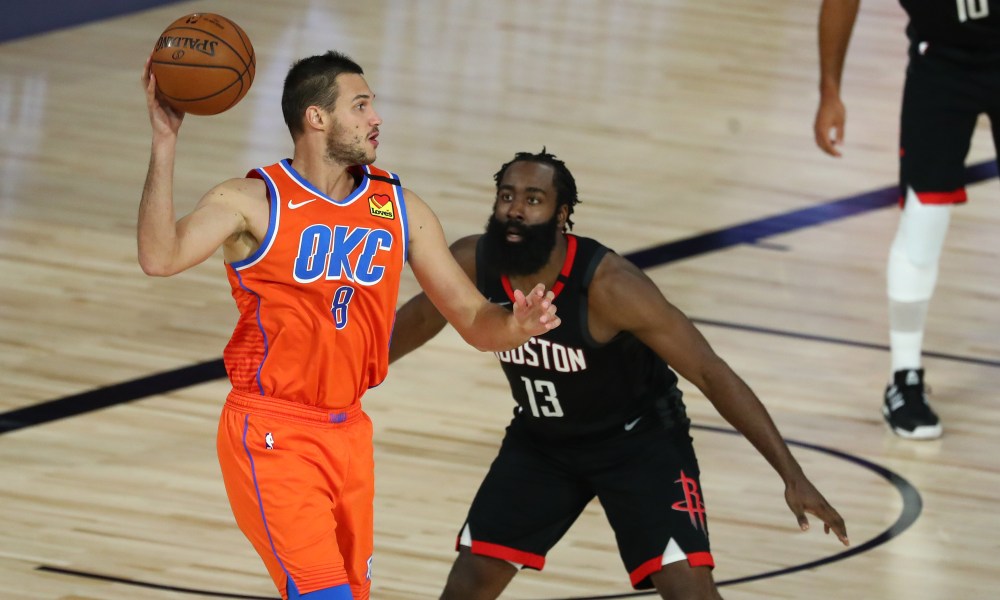 Gallinari needs to be more aggressive and importantly, enjoy a better scoring display in Game 4

Simply put, Gallinari needs to be more efficient in Game 4 against a Houston side determined in their own way to right the wrongs of Saturday’s dramatic finish.

He was a disappointing 4-of-12 from the field in 39 minutes, with 20 points, seven rebounds, one assist, steal and two turnovers.

It wasn’t a vintage display by any means, but he made clutch free-throws in overtime and still quietly contributed even though his shot wasn’t falling.

That needs to change, as you can expect Houston to adapt their defensive schemes to overwhelm the Paul-SGA backcourt duo, while Schroder’s streaky shooting continues. 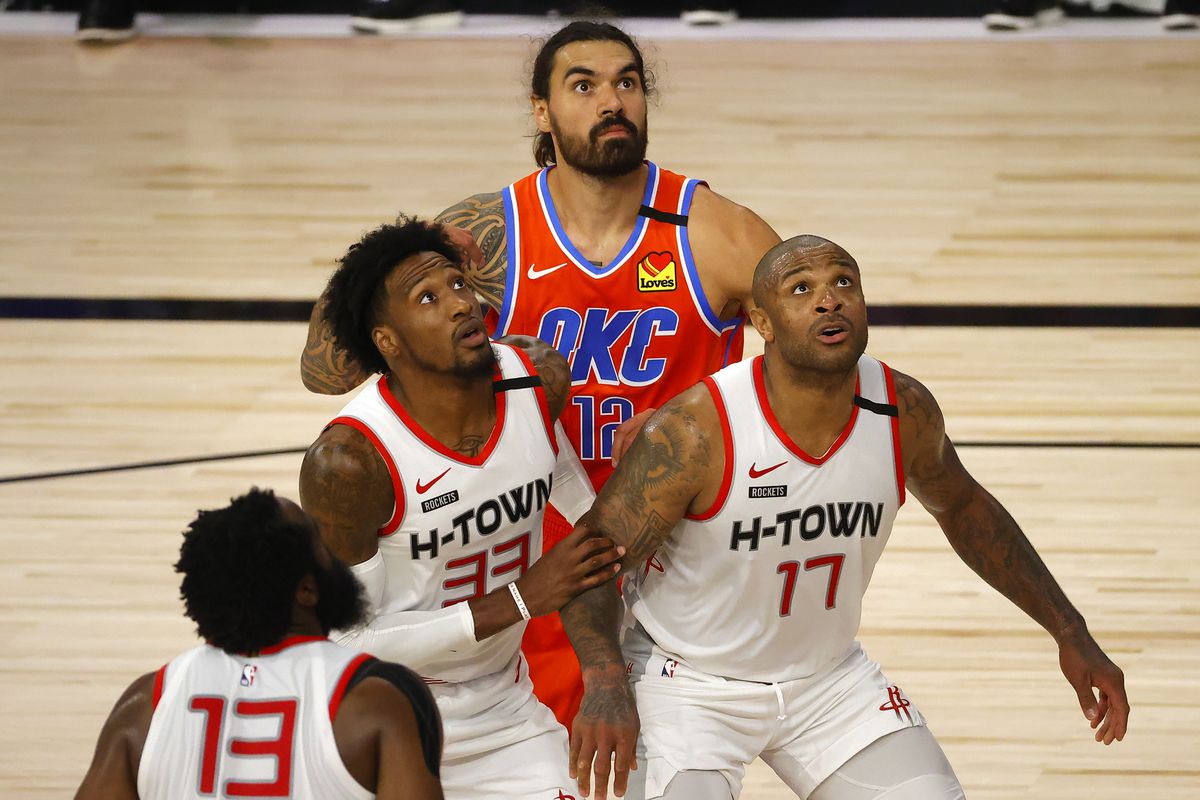 Covington (second from left, no.33) largely struggled in Game 3 and needs to improve

After looking at Saturday’s box score, I had to double and triple-check to make sure Covington didn’t exit the game with an injury or get himself fouled out.

He played just 19 minutes, struggled defensively with four quick fouls and didn’t do himself justice – five points, five rebounds and two steals during an important game.

In terms of the plus-minus, only an inefficient Eric Gordon (-29) had worse than his -16.

It also speaks volumes that Jeff Green’s efficiency and energy from the bench made it an easy decision for Mike D’Antoni to rely on the veteran forward instead.

He’s had a handful of these inefficient games in the bubble and must bounce back here.

According to ESPN’s Basketball Power Index, the Rockets are again slight favourites (56.3%) to retake their two-game series lead against OKC here.

FiveThirtyEight’s win probability statistics lean more favourable towards Houston – 69% – which probably has something to do with Steven Adams’ injury status.

Add to that, the fact a number of their sharpshooters endured rough nights – yet they were a missed FT away from still winning late on.

OKC would love to level up the series, but even they’d admit they remain underdogs – despite Houston still missing Russell Westbrook – something you wouldn’t have imagined me saying 13 months ago.

I think Houston will narrowly edge a closely-contested encounter here, but stranger things have happened. 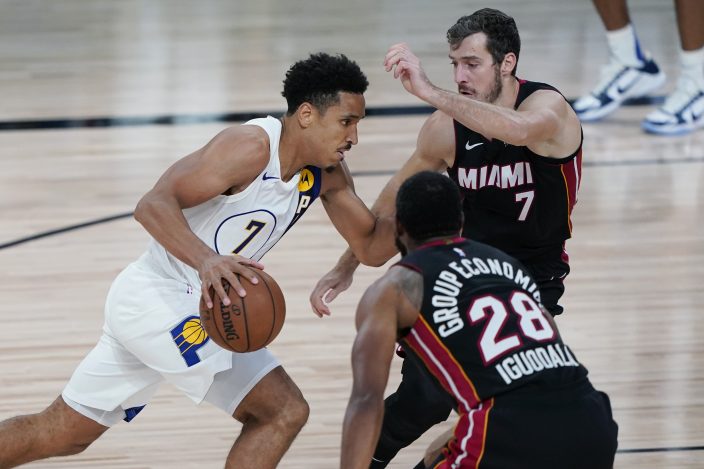 Brogdon led by example for the Pacers in Game 3, but Miami survived their spirited fightback

Despite being down nearly 20 to start the third quarter, Indiana were ultimately bested by Jimmy Butler and Bam Adebayo late in the fourth.

Now, they’re 48 minutes away from a first-round sweep and unceremonious exit to a campaign that promised plenty when signing Malcolm Brogdon in a four-year, $85m deal last summer.

Game 4 offers the Pacers an opportunity at a brief reprieve, though Miami also have the chance to seal their place in the Eastern Conference semi-finals too. Who wins here?

Butler had 27 points, eight rebounds, four assists, three steals and one block — Adebayo had a double-double (22 pts, 11 rebs), alongside five assists and a steal.

Although the pair had 11 turnovers and five fouls between them, they were crucial as Miami survived Brogdon’s late scoring surge to take a commanding 3-0 series lead.

Tyler Herro led the game’s bench scorers with 20 points on 6-of-12 shooting, including three triples, as Erik Spoelstra’s men responded well to the Pacers’ passionate burst.

Brogdon, Myles Turner and Aaron Holiday were critical in helping them cut the Heat’s lead down to four before the fourth quarter.

Then, Brogdon was key down the stretch. He scored their last eight points and didn’t stop until the final buzzer in an admirable display, though his teammates let him down. 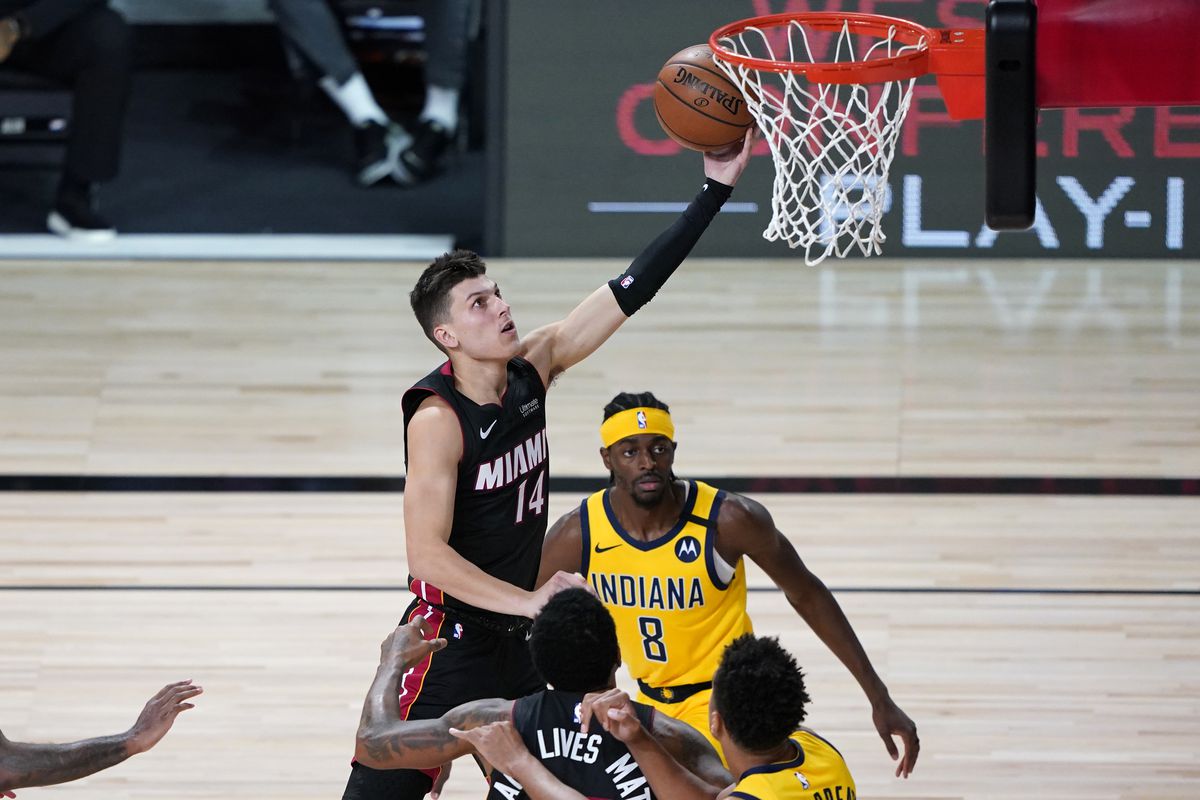 Herro, a sharpshooting rookie, is flourishing from the bench and will be key again in Game 4

As previously mentioned, the first-year sharpshooter led all bench scorers with 20 in 29 minutes during an important Game 3 victory.

It was his best scoring performance since August 13, during a gut-wrenching one-point defeat to the Thunder.

He needs to build on that as Miami target a series sweep here – it’s likely the aforementioned Adebayo-Butler combo are guarded more intently and that could see him take a similar amount of shots (12 attempted) again.

Oladipo’s life was made difficult in Game 3, but he’ll target a much more efficient showing here

It’s remarkable how these things work sometimes. Just last month, Oladipo revealed he wouldn’t be playing in Orlando and instead continuing his rehab with the team from the bubble.

After some successful scrimmages, he decided it made sense to play and although this has been a tough year for the guard, he’ll be eager to go out with a flourish here.

After scoring 22 points with four assists and two steals in Game 2, he had 20 before being fouled out after 34 minutes on Saturday.

His shot efficiency struggles are understandable, considering he’s still not truly 100% after a gruesome ACL injury.

However, shooting 8-of-21 from the field isn’t good enough for a player of his calibre. He’ll want to explode here and make sure they don’t get swept.

According to ESPN’s Basketball Power Index, the Heat are narrow favourites (54.1%) as they aim to sweep a playoff series against the Pacers for the first team in their head-to-head history tonight.

FiveThirtyEight’s win probability statistics are more comfortable backing Miami here – 65% – which is justified by their impressive bench production and the Pacers’ multitude of injury issues.

That is without mentioning a Warren-Butler matchup that hasn’t really got going, as the latter has relished clamping his series rival here.

Indiana would hate to get swept and must come out with renewed intensity, but I’d back Miami to copy Boston’s weekend success by progressing into the semis with a 4-0 win.