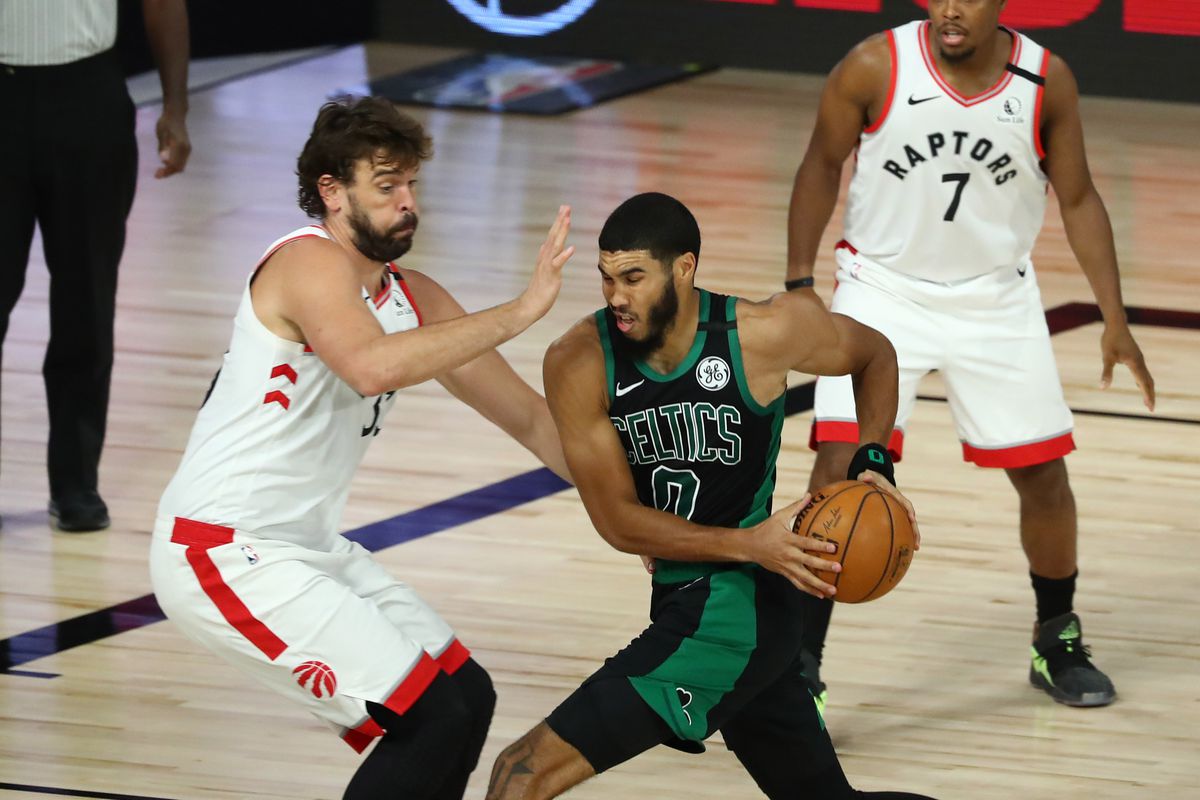 After an impressive 112-94 victory in Game 1, the Boston Celtics hope to double their series lead against a slow-starting Raptors tonight. It wasn’t the start to the Eastern Conference semi-finals that Nick Nurse hoped for, but he’ll be optimistic for a much more efficient shooting outing as they look to improve in Game 2. Will they level the scores here?

Jayson Tatum and Marcus Smart led the way with 21 points each, Kemba Walker had a double-double (18 points, 10 assists) while there were impressive displays elsewhere among Brad Stevens’ team as they started fast and blitzed Toronto.

Boston came out on fire with a 11-3 run and despite some on-the-fly adjustments by Nurse to stop the bleeding, his players had conceded 39 points in the first quarter alone.

By half-time, they were down 17 (59-42) and had a mountain to climb, which was made more difficult by the Brown-Tatum-Walker combinations on display.

It didn’t help matters that they shot poorly as a team from deep, either. From 40 three-point attempts, they made just ten across the 48 minutes (25%), compared to Boston’s 43.6%.

Fred VanVleet and Pascal Siakam were cold with their shooting range, en route to an uneasy defeat that leaves the defending champions with work to improve upon here. 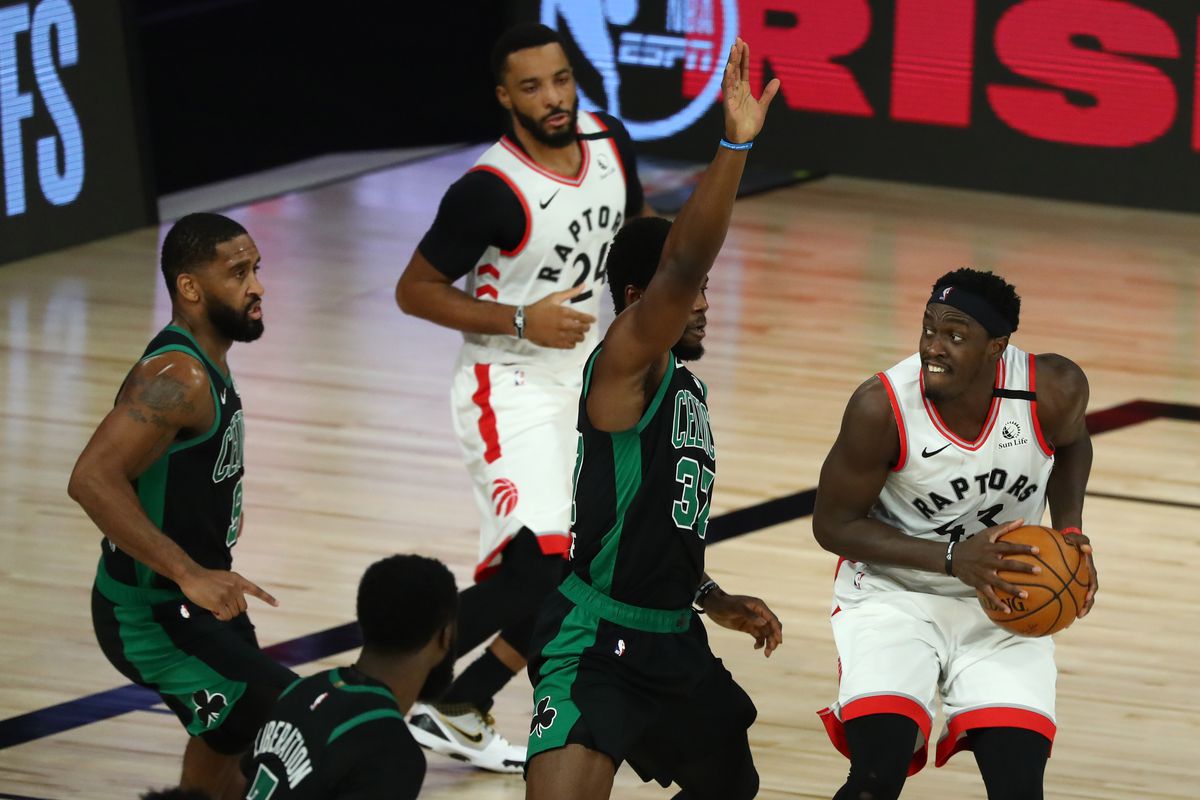 Siakam (right) struggled from the word go, with just 13 points on 5-of-16 shooting last time out

As mentioned, Spicy P was among those struggling with his shooting right from the off in Game 1. It didn’t help matters that he found himself in foul trouble early, increasing the workload on his teammates while he idled by on the bench.

It’s important that he’s smarter with his man-on-man defence in Game 2, while getting into a rhythm early with his shot selection too.

That’s easier said than done, granted, but even if his shot isn’t falling, he cannot afford to take bad attempts or overcomplicate matters – why not facilitate, like Kyle Lowry and VanVleet, if things aren’t going his way?

The pair both had eight assists, while he recorded just two – the same amount as center Marc Gasol.

His playmaking is steadily improving despite being a big man, as evidenced by his 10 assists in Game 4 against Brooklyn. Perhaps he needs to show that even more here. 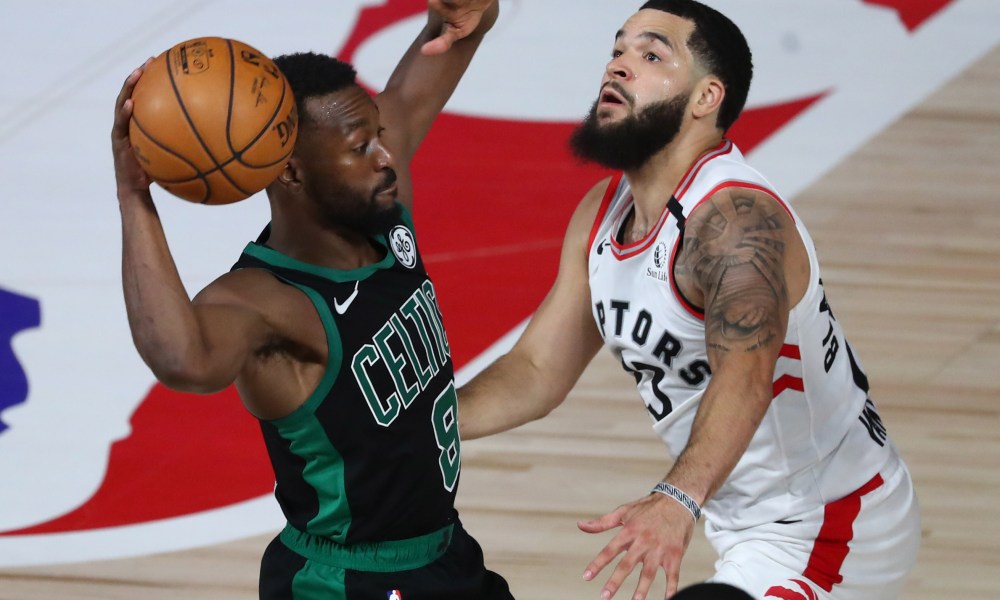 There was a slight scare and sharp intake of breath when Kemba clutched his foot in pain, having landed awkwardly, but the All-Star guard shrugged it off before delivering an impressive Game 1 outing.

He had 18 points – including four threes – from 11 shot attempts and was a key playmaker for his teammates too, recording the most assists (10) he’s had in 2020 to date.

Given his high standards though, he’ll look to build on that encouraging display by scoring even more points at a more efficient clip.

It’s doable, but Toronto’s defence will make the necessary adjustments to stifle Boston’s hot hand. How they respond to that, is key.

Unsurprisingly given the competitive nature of this semi-final series, ESPN’s Basketball Power Index has the Raptors as slight favourites (50.8%) to edge Game 2.

However, FiveThirtyEight’s statistics lean more towards a 2-0 Boston lead, giving them a 59% win probability chance.

Both outcomes are fair and understandable, in what many believe could be a potential seven-game matchup to kick off September.

It’s unlikely Toronto will shoot as poorly as they did, all-round, two games in a row, but how will the Celtics defence react if roles are reversed and they are suddenly down a dozen early on?

These are questions that need answering but I’m sure the Raptors will come out firing after being punished for a sluggish start in Game 1.