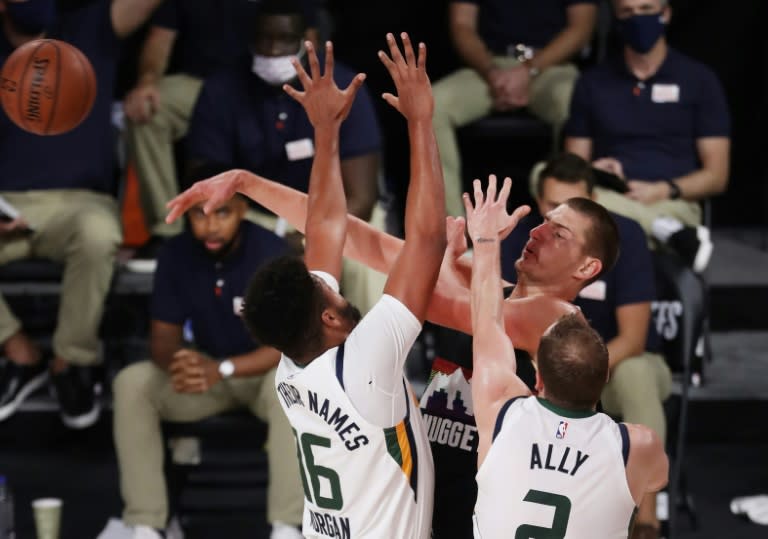 Nikola Jokic led the game in scoring and regularly got the better of fellow All-Star center Rudy Gobert, though the Utah Jazz did well to comeback after a sluggish start and Mike Conley was inches away from a stunning buzzer-beating three to break Denver hearts and progress into the WCSF against the Los Angeles Clippers. 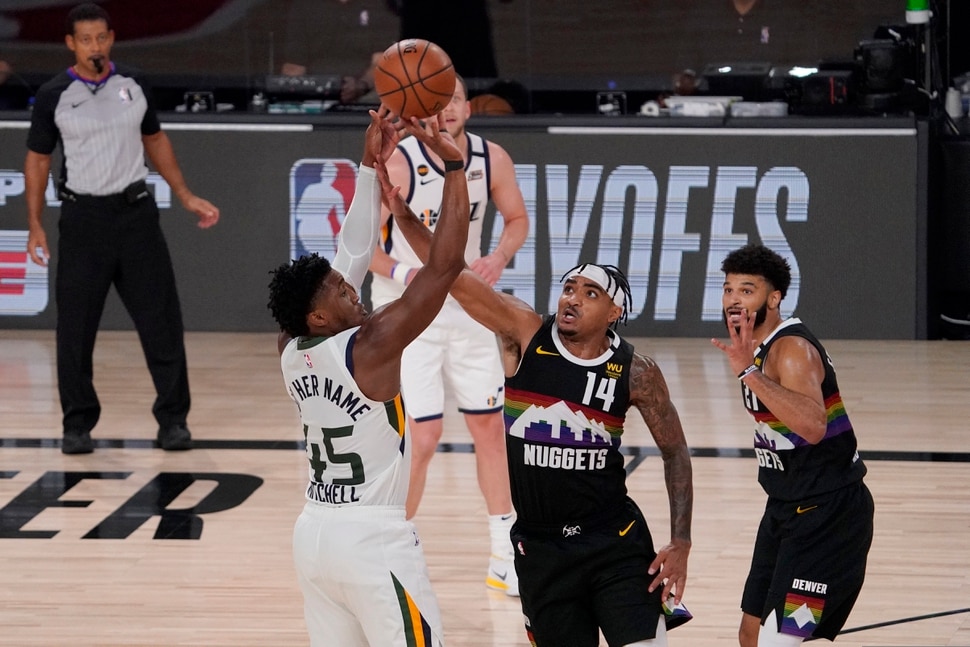 Given the historical numbers that both have posted in this enthralling series, it was billed as a Donovan Mitchell vs Jamal Murray duel.

With both sides battling to win Game 7 and earn their WCSF berth against the Los Angeles Clippers, it was a slow-burning affair which burst into life after half-time.

Boosted by purposeful showings from Murray, Monte Morris, All-Star center Nikola Jokic and Michael Porter Jr off the bench, head coach Mike Malone would have been pleased  with his side’s committed performance on both ends of the floor. 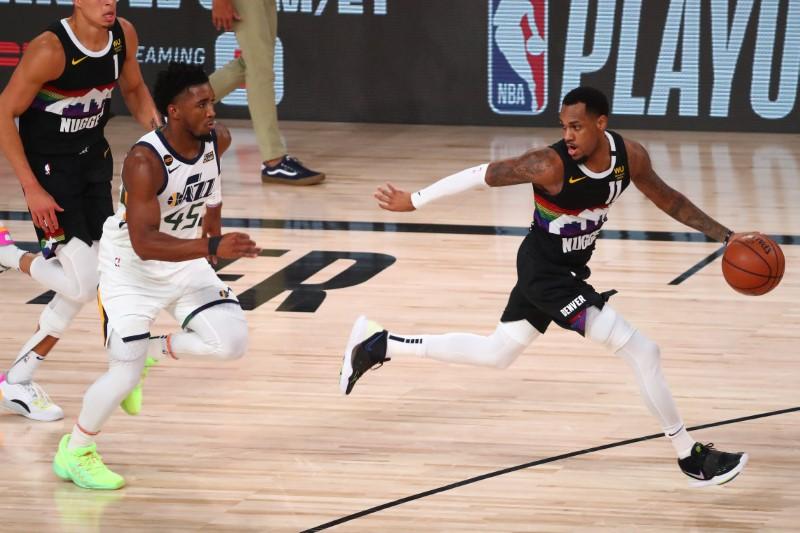 Morris (right) was effective – leading Denver with 5 assists, had 7 points, 3 rebs and steals too

Defensively, they kept the Jazz to just 36 points at half-time and forced turnovers aplenty from Mitchell – their offensive fulcrum. Both he and All-Star teammate Rudy Gobert quickly found themselves in foul trouble (3 fouls each) before the second quarter ended.

Jokic was constantly happy in his one-on-one matchup against Gobert, who didn’t contest intensely enough or close the distance on mid-range shots as well as he could have.

Combine all of that together and you could be forgiven for thinking this was suddenly the Nuggets’ game to lose, up 15 at half-time.

To their credit, Utah didn’t rest on their laurels as Jordan Clarkson helped provide a spark from the bench while sharpshooting wing Joe Ingles started fairly well.

They needed more though and judging by Mitchell’s body language, he knew it too.

Mitchell was like a moth to a brightly-burned flame in the third quarter: scoring 14 consecutive points for Utah as they suddenly closed the lead back to single figures.

Mike Conley’s well-executed three, off a costly Murray turnover, made it a 12-0 run in the first four minutes after half-time.

It’s usually a game of runs, so perhaps given the competitive nature of this encounter, it shouldn’t have been surprising that Denver had just a five-point lead heading into the fourth quarter.

Gobert had improved, the Nuggets were scoreless and Murray – nursing a knee contusion after an Ingles foul – was increasingly inefficient and hesitant at times. 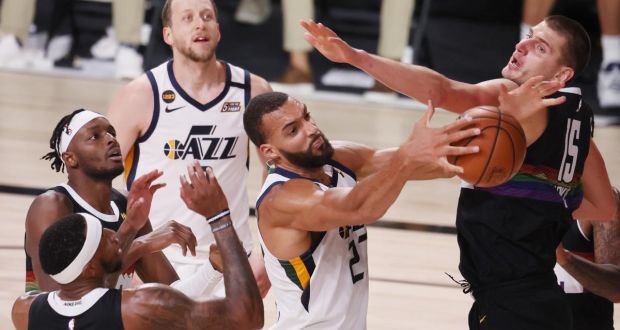 A measure of Rudy’s progression after a sloppy first-half?

He blocked an advancing Jokic at one end, before bursting down the other and outrebounding both Jerami Grant and Torrey Craig before being fouled for free-throws.

Making both, he put Utah up for the first time since early in Q1 (7-5) and didn’t rest on his laurels either — hanging in the air and absorbing contact by Jokic to score again.

Jokic pounced on a Murray miss for a clever putback, ending a six-minute scoreless run (shooting 1-of-10 in the 4Q).

Conley’s shooting struggles continued as Jokic took charge of Utah’s offense with two timely buckets an a deft assist in the paint.

Mitchell levelled the scoring after driving into the paint, before Murray and Gobert made big plays as the score was level at 78 with 45 seconds to play.

Jokic showed patience to persist and score a turnaround jumper under pressure from Gobert, before a frenetic final sequence ensued.

Gary Harris’ active hands proved decisive as he stripped Mitchell, but Denver advanced up the court instead of playing it smart and waiting for an intentional foul.

Torrey Craig missed a layup in transition, Utah went up the other end and Conley – who shot 2-for-13 – missed a wide open buzzer-beating three, to send Denver home.

Instead, it’s the Utah Jazz that will be departing the Orlando bubble despite their spirited comeback here, during a winnable series that they were 3-1 up in. 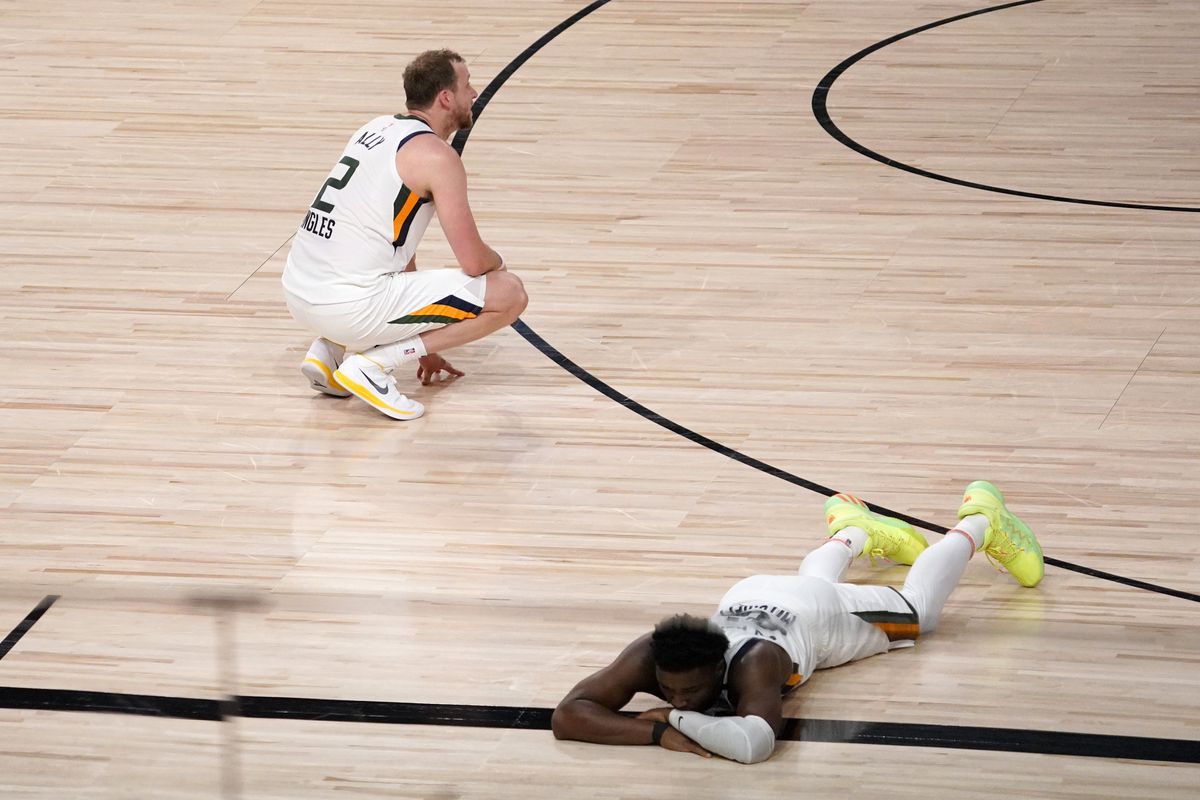 Mitchell couldn’t believe it, and rightly so. Jokic, who had a double-double and led the game in scoring with 30 points on 12-of-23 shooting, knew as much too post-game.

“Mike [Conley] had an open look, the ball went in and out but we didn’t quit, we were down 3-1 and gladly we won the game.”

Game 1 against the Los Angeles Clippers awaits on Thursday evening.