He didn’t play his best tennis, found himself down and seemingly out deep in the fourth set, but world number 17 Denis Shapovalov showed resilience under pressure to stifle Taylor Fritz before booking his place in this year’s US Open last-16 – he’ll play world no.11 David Goffin on Sunday. 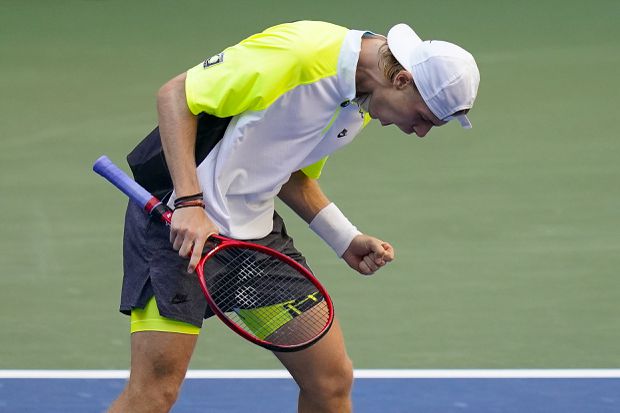 Pre-tournament, Fritz said one of his best strengths is the ability to stay calm under pressure.

Yet the 22-year-old was two points away from victory on multiple occasions and instead of holding firm to achieve a career-best Grand Slam finish among home comforts, his promising lead in the fourth set vanished quite dramatically.

Shapovalov had lost four successive tiebreaks but meant business in this one, with incremental increases in serving speed and his overall aggressiveness during clutch moments.

Fritz was 4-1 up, then 5-2 up in the aforementioned set. Denis won four consecutive games en route to a nervy finish, but one that dictated the rest of their 4-hour 17-minute marathon.

Fritz falters with match in his grasp, Shapovalov takes advantage

He raced into a three-game advantage early in the fifth and Fritz was visibly struggling as his body language told the story.

Understandably tight, the American had served for the opportunity to reach a Grand Slam’s final 16 – it would have been a career-first for him. His movement, among the areas heavily criticised in previous years, had clearly improved.

He covered ground quickly and was able to unleash some beautiful down-the-line winners. But after freezing at a decisive moment where Shapovalov was there for the taking, his mobility suddenly felt limited as his unforced error count increased.

Denis, who has won both their previous H2H matches, fed off that negative energy across the court as Fritz went into his shell and was audibly berating himself.

Having already reached this stage in 2017 before losing to 12th seed Pablo Carreno Busta during a tightly-contested three sets, the Canadian ultimately ran away with a 6-2 five set finish. 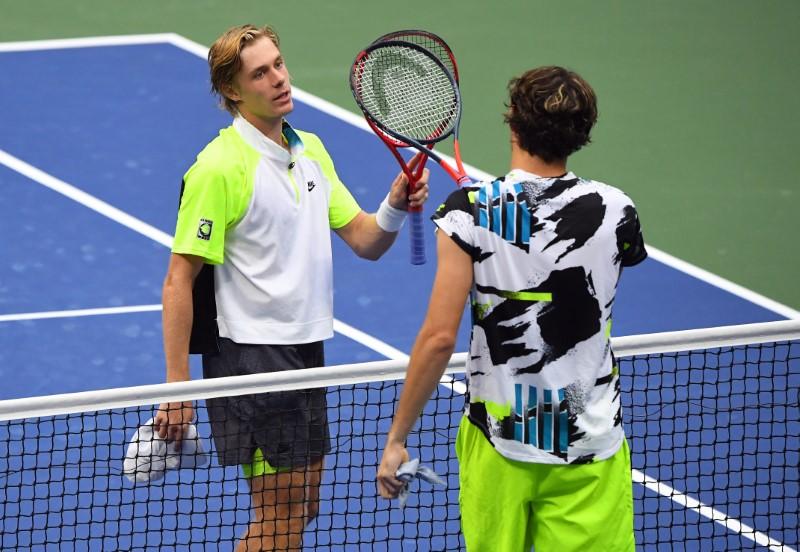 Billed as a battle of two young guns, this spectacle didn’t disappoint – though errors were in store

Shapovalov paid his respects to Taylor post-match, admitting he was a little fortunate but ultimately made that luck too before looking ahead to an intriguing showdown with Goffin.

“Huge shoutout to Taylor, we both deserved to win today… I saw him get tight, a little lucky.

Been in this situation twice before so figured that changes needed to be made and I really picked up my intensity and [performance] level.

Super excited to be in the fourth round, another extremely tough player – he’s going to make me play a lot of balls, is crafty and I’ll play a lot from the back.”

You can safely assume Goffin won’t falter if he’s in a commanding position, and given his big-match experience, it’s an even trickier test for Shapovalov.

He dropped a set in successive matches against wildcard Sebastian Korda (R1) and Soonwoo Kwon (R2) and admitted he’s feeling “some tiredness” after a five-set rollercoaster here.

It’s telling that he hasn’t played his best tennis so far this week, yet is into R4 at a major for the second time and has plenty of potential to achieve over the coming decade and more.

However, knowing that, it was frustrating to hear how critical Amazon Prime’s commentary team were of Shapovalov at times – suggesting that if he didn’t win a game like this, perhaps it would be a precursor to how his career would go, ala Grigor Dimitrov.

We don’t need to hear that, in a matchup between two young guns trying to establish their Grand Slam pedigree – like every top ATP player under 25.

Shapovalov’s compatriot Felix Auger-Aliassime (world no.21) blitzed past Andy Murray and is into R3, while multiple youngsters are taking their opportunity:

Selected round three matchups (players in bold are 25 or younger)

I haven’t even discussed Alexander Zverev, also into R4 – just going to show that maybe those critics should watch and wait before rushing to such drastic conclusions about player growth and attainment under the bright lights of a Grand Slam tournament.