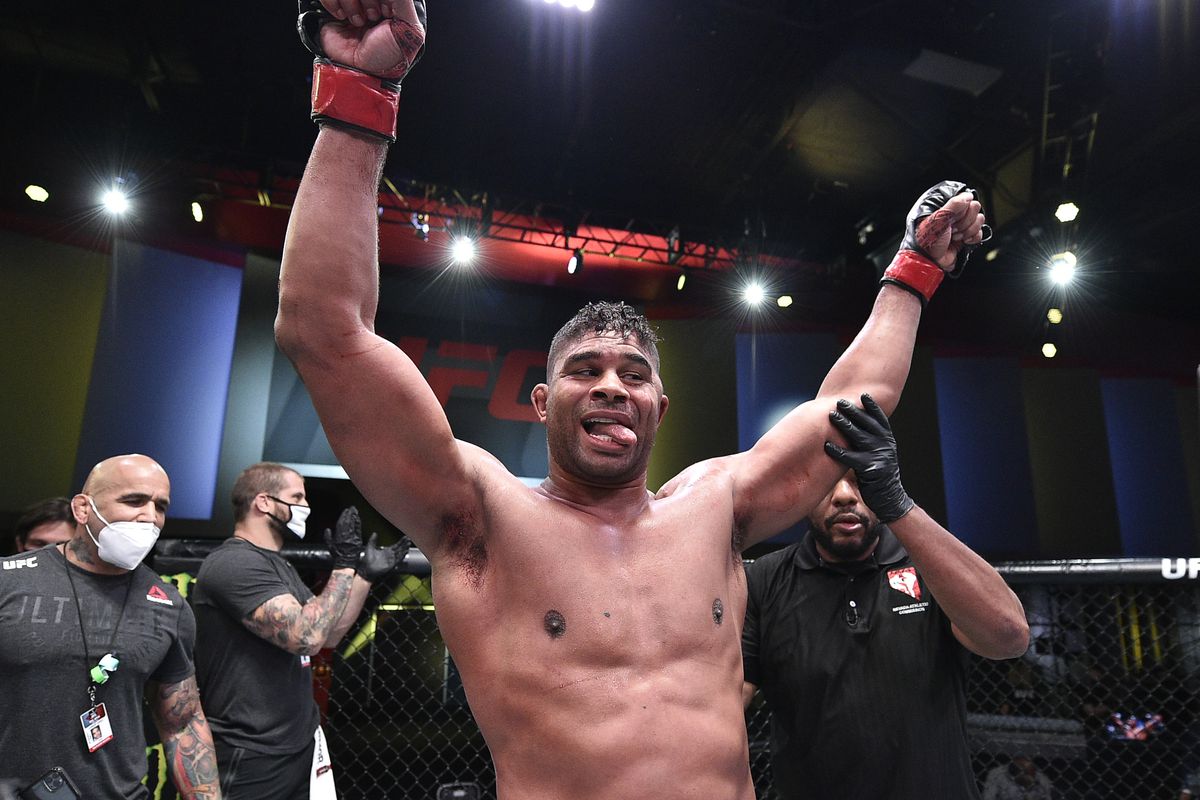 Alistair Overeem delivered an impressive comeback victory in the evening’s main event to reinforce his claim for a final heavyweight title run, after light-heavweight contender Ovince Saint Preux returned to his natural weight in style with a beautiful R2 knockout finish against a heavy-hitting favourite during the card’s co-main event.

Overeem recovers from sluggish start to startle Sakai in style

Overeem, who turned 40 in May, hasn’t shied away from his desire to challenge for UFC gold again before he eventually retires.

With 66 MMA bouts (47-18, 1 NC) and multiple kickboxing matches to boot, the London-born Dutchman wants a second go at reigning champion Stipe Miocic – after a Fight of the Night round one defeat at UFC 203 this time four years ago.

He’s won six and lost three since then – against number one contender Francis Ngannou, #2 ranked Curtis Blaydes and Jairzinho Rozenstruik (#3), the latter of which he was comfortably winning before suffering a devastating knockout punch with four seconds to go in R5.

So it was refreshing to see him recover from a slow start against #8 ranked Augusto Sakai to prevail early in the main event rounds – landing some deadly ground and pound before referee Herb Dean had no choice but to stop the fight. 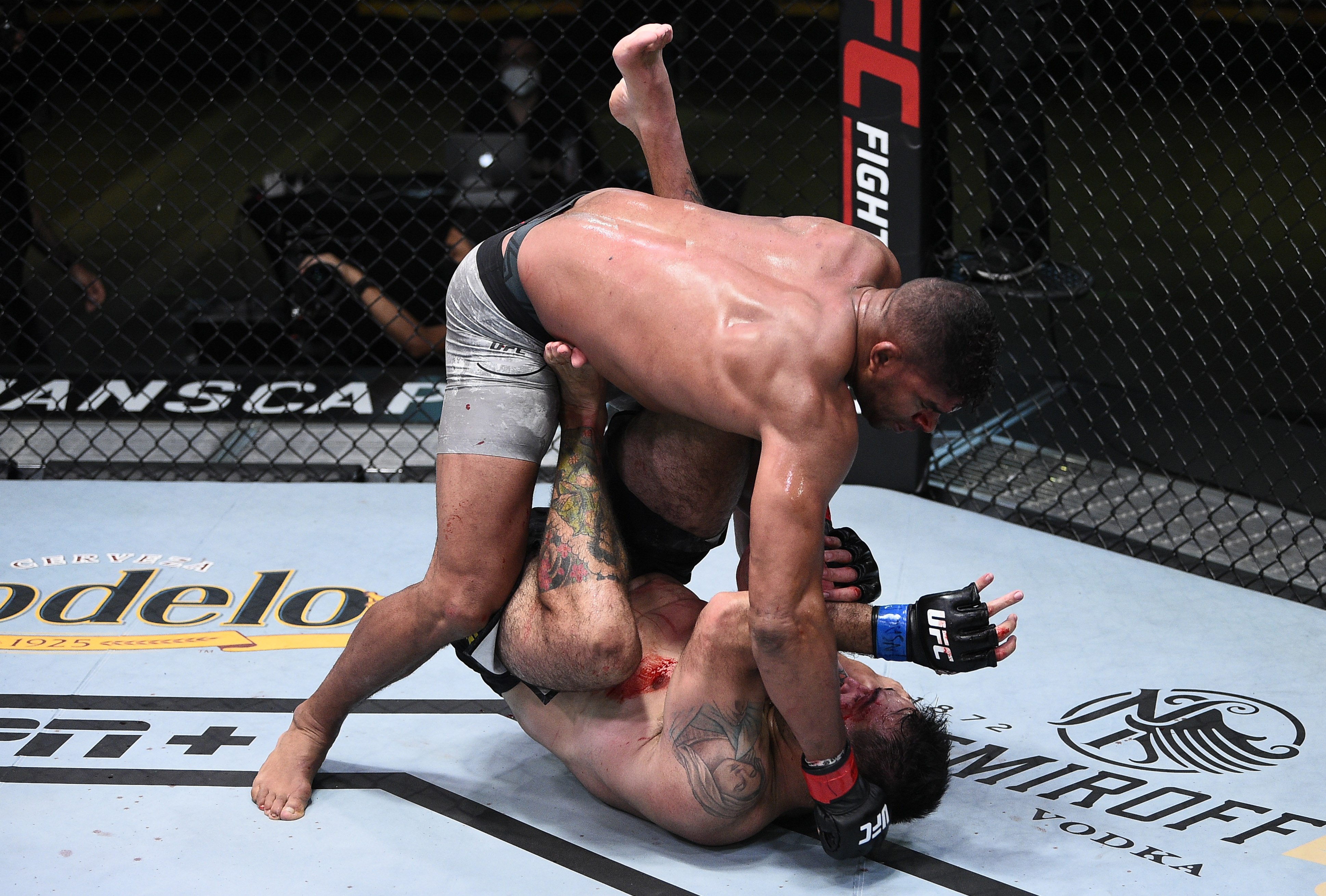 After recovering from impending danger against Walt Harris back in May, perhaps you shouldn’t be surprised.

He landed 81% of his 114 significant strikes thrown (92) and completed all three of his takedowns attempted to boot.

Sakai outstruck him in each of the first three rounds, but unpeturbed, he didn’t freeze under pressure. Instead, it was the Brazilian – on a six-fight win streak no less – that wavered as the minutes ticked by.

If it was a three-round main event, like Aleksandar Rakic was afforded the same luxury last week, perhaps this would be a different story altogether.

But over main event rounds, he tired against his toughest opposition yet and had no answer for some brutal strikes after a fourth-round where he was swarmed with constant ground control.

“I had a feeling this would take me a few rounds and it took me five, all respect to my coaches: they guided me perfectly and camp was perfect. That’s why we were able to make the successful adjustments during the fight.

This is absolutely the very best I’ve ever been. I continue to grow with the team, it’s awesome. We’ll see what the future brings – I see myself in action again in December or January.”

Saint Preux back at light-heavy, wins via R2 walk-off knockout 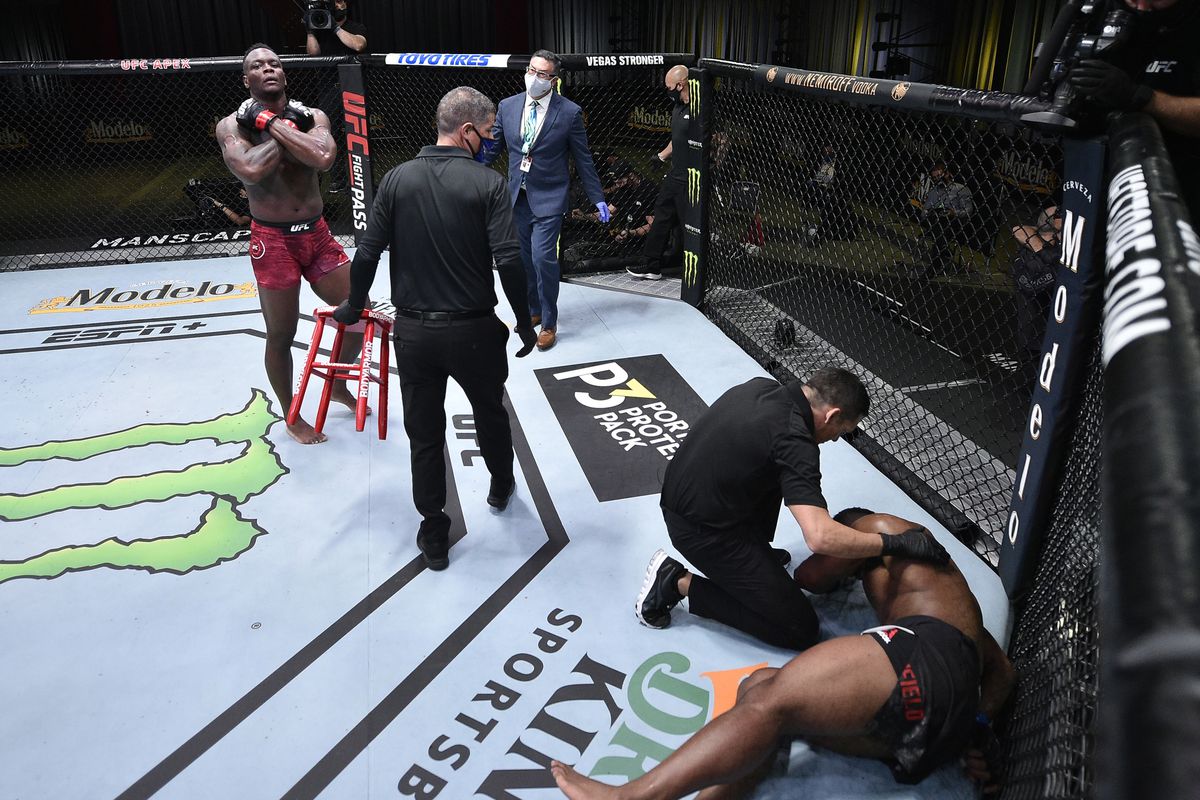 Heading into this co-main event, Alonzo Menifeld (9-2) was the slight betting favourite against an experience veteran in Saint Preux – who has been struggling for consistency in recent years.

Since his head kick KO win over Corey Anderson at UFC 217 in November 2017, OSP lost 4-of-6 subsequent bouts. Now 37, he needs a flourish if he’s to end his illustrious MMA career on a high.

This matchup had the typical gatekeeper feel to it, especially as Menifeld started brightly and was lauded as a heavy-hitting prospect ready to bounce back after losing to Devin Clark in June.

After landing a few good hooks, the 32-year-old engaged in the clinch but was crucially playing to Saint Preux’s strengths – slowing the fight to his own style of pace as the round continued. 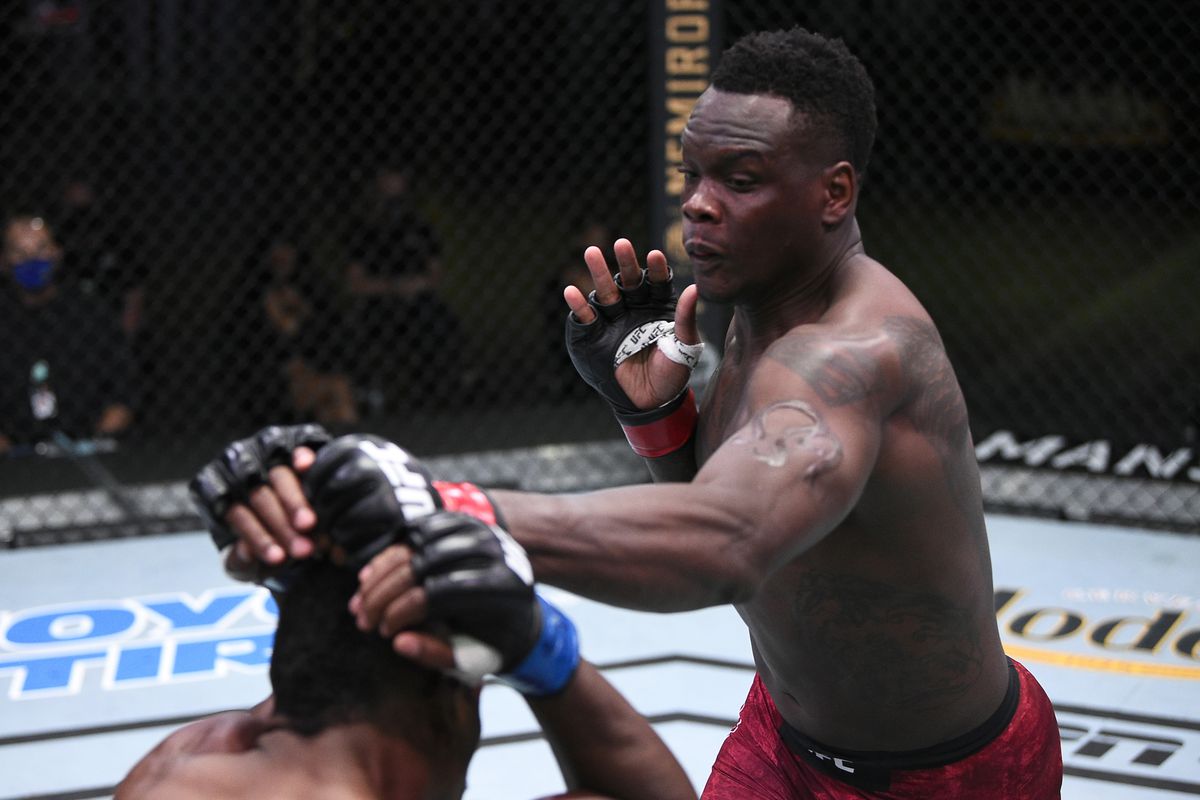 OSP landed a handful of kicks with his long legs, but Alonzo finished R1 strong with a spirited punch combination which landed flush just before the horn sounded.

He didn’t win the round, but it was nonetheless an encouraging start after being measured with his striking. Both were making a conscious effort to pick their punches methodically, though Menifeld was circling around the Octagon.

However, he got overeager after appearing to stagger OSP before paying the ultimate price: advancing forward: eating a brilliant counter left hook to the chin which instantly dropped him.

Saint Preux revealed he’ll be “perfectly fine” with another fight before this year is over, but also had some choice words post-fight, saying:

“People usually think I don’t have power – I went up to heavyweight and knocked down one of the most durable HWs [Ben Rothwell]. Menifeld has power but mine comes with precision.

He started off well, staying at bay and trying to choose his shot. I knew that eventually he was going to have to commit. Coming in, that’s what we were ready for – him committing, me stepping off catching him with a check-hook.”

Rest oF THE main card, featuring WINS FOR KELLEHER AND ARAUJO

Winning on all three of the judges’ scorecards, Michel Pereira provided the exclamation point on an impressive victory by finishing Zelim Imadaev with 20 seconds left via a rear-naked choke.

After a Fight of the Night loss to Tristan Connelly and being disqualified for an illegal knee against Diego Sanchez, the 27-year-old Brazilian is now 2-2 in the UFC.

Interestingly, the welterweight opted to callout #4 ranked Jorge Masvidal on the broadcast interview immediately afterwards – perhaps a touch too optimistic at this stage of his career.

After success on the Contender Series, Brazilian middleweight Andre Muniz is now on a six-fight win streak after a R1 submission (armbar) victory against Poland’s Bartosz Fabinski.

He inflicted the 34-year-old’s second UFC loss in double quick time with a range of submission manoevures that proved too much to handle and had his say on who he wants next, too.

“Whoever the UFC wants to give me, I am going to fight. But I want to compete against Omari [Akhmedov]. He fought against Chris Weidman and I think it will be an interesting fight.”

In the featherweight division, Brian Kelleher had a quick night’s work against company debutant Ray Rodriguez (16-7) – ending the fight after just 39 seconds with a guillotine choke. 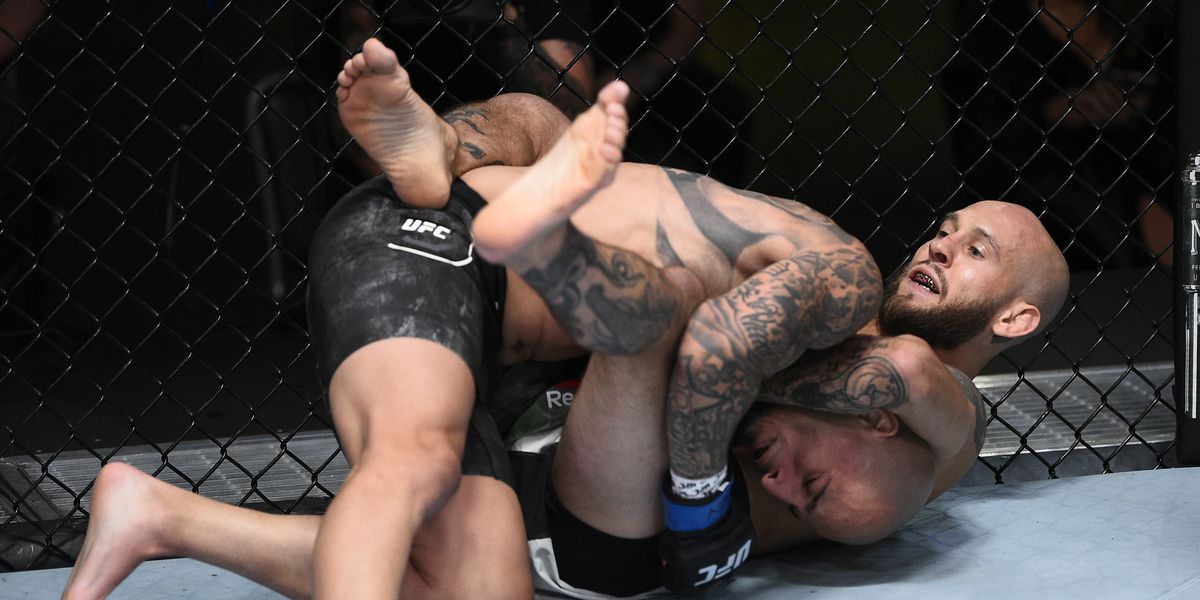 Originally scheduled to fight Ricky Simon, the 27-year-old’s cornermen tested positive for COVID-19 and he was forced to withdraw.

Kevin Natividad was to take his place, but was also pulled from the encounter for undisclosed reasons and Rodriguez replaced him, having weighed in as a possible backup on Friday.

He shot for an early takedown and was made to pay for his naivety on the ground by Kelleher, who has three wins in 2020 already. Having turned 34 last month, he’s eager for more.

“I feel amazing right now. They only remember you for your last fight. I’m back to my winning ways again, it feels good after that last fight with Cody.

I have a lot of KOs and submissions – I’m willing to fight anybody. It’s about being that guy who’s willing to step up and fight. I’m trying to make my way up the rankings. If Pedro Munhoz wants a guillotine battle, that would be fun.”

After losing by UD to Jessica Eye on the UFC 245 early prelims last December, #8 ranked flyweight Viviane Araujo improved to 9-2 in her MMA career with a commanding victory following 15 minutes of action against #11 ranked Montana De La Rosa. 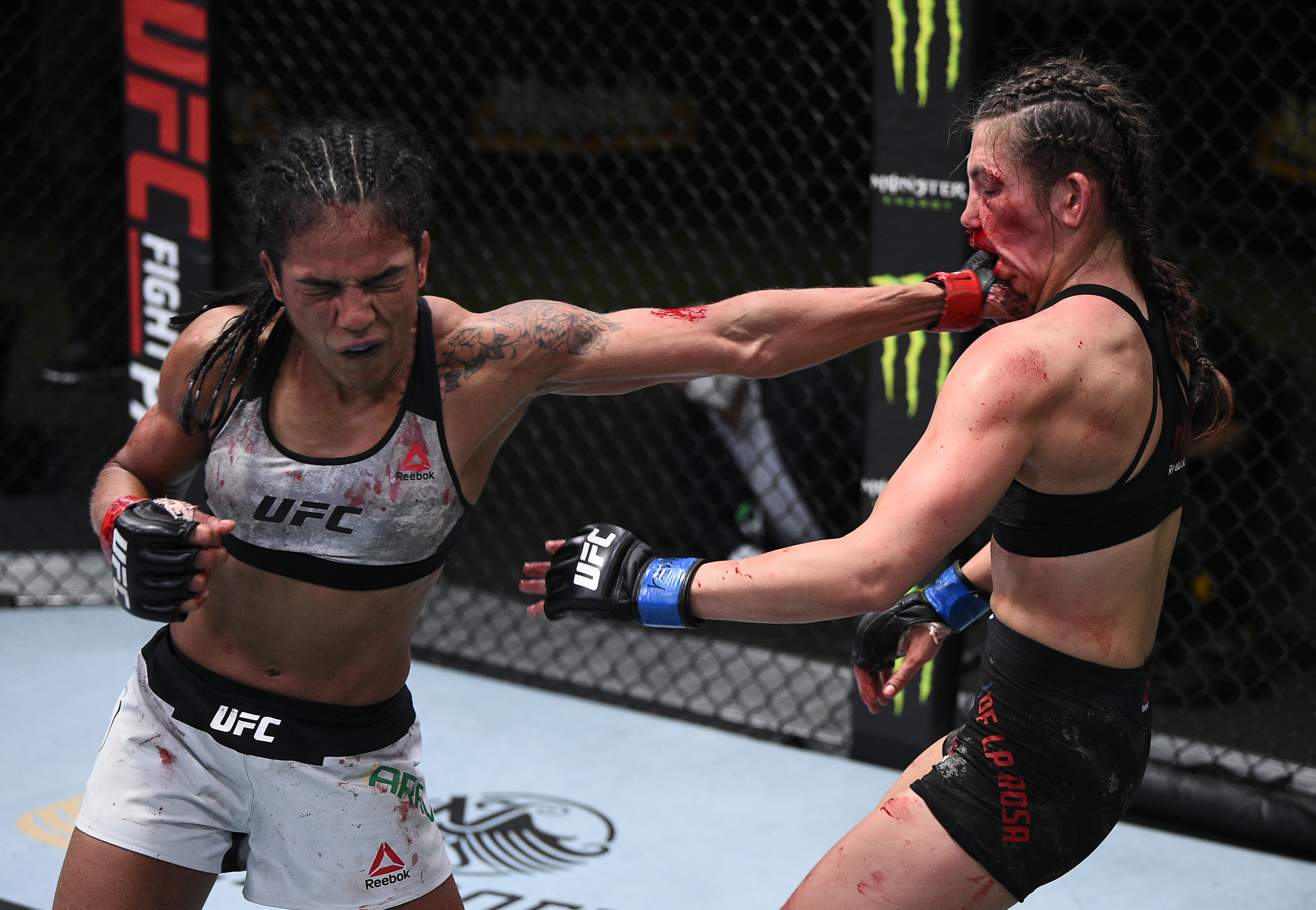 It’s unlikely to move her up far in the next rankings update, but the 33-year-old Brazilian is understandably itching for another matchup before 2020 is over.

On what’s next for Araujo, she said: “I don’t have a name in mind to fight next – I want to go continue working on my game and be ready in November or December for a new opponent and challenge.”

In the night’s only bantamweight clash, Hunter Azure (9-1) returned to winning ways after his Fight of the Night defeat by Kelleher in mid-May on the Smith-Teixeira card.

He inflicted Cole Smith‘s second successive defeat with a UD victory on all three judges’ scorecards (29-28) and revealed post-fight that achieving victory was of paramount importance.

“My only focus coming into this fight camp was to get back into the win column, I didn’t care how I got it – just focused on getting my hand raised.

You’re only as good as your last fight – everyone saw me coming off that loss – this was a big step for me, to come back and get this win. I want to keep growing and grinding after this.”