Denis Shapovalov recovered from a set down to beat world number ten David Goffin and surpass his career-best Grand Slam finish against the crafty Belgian – earning a US Open quarter-final berth, where he’ll play against Spain’s Pablo Carreno Busta on Tuesday.

Moments change games and that was emphasised early in the second set: Shapovalov, stung after losing the first set tiebreak without scoring a single point, didn’t wallow in self-pity or allow Goffin an easier route to victory.

He broke Goffin’s serve at 3-1 in the second and was energised from there, against a player and style he previously revealed would prompt him to raise his game. 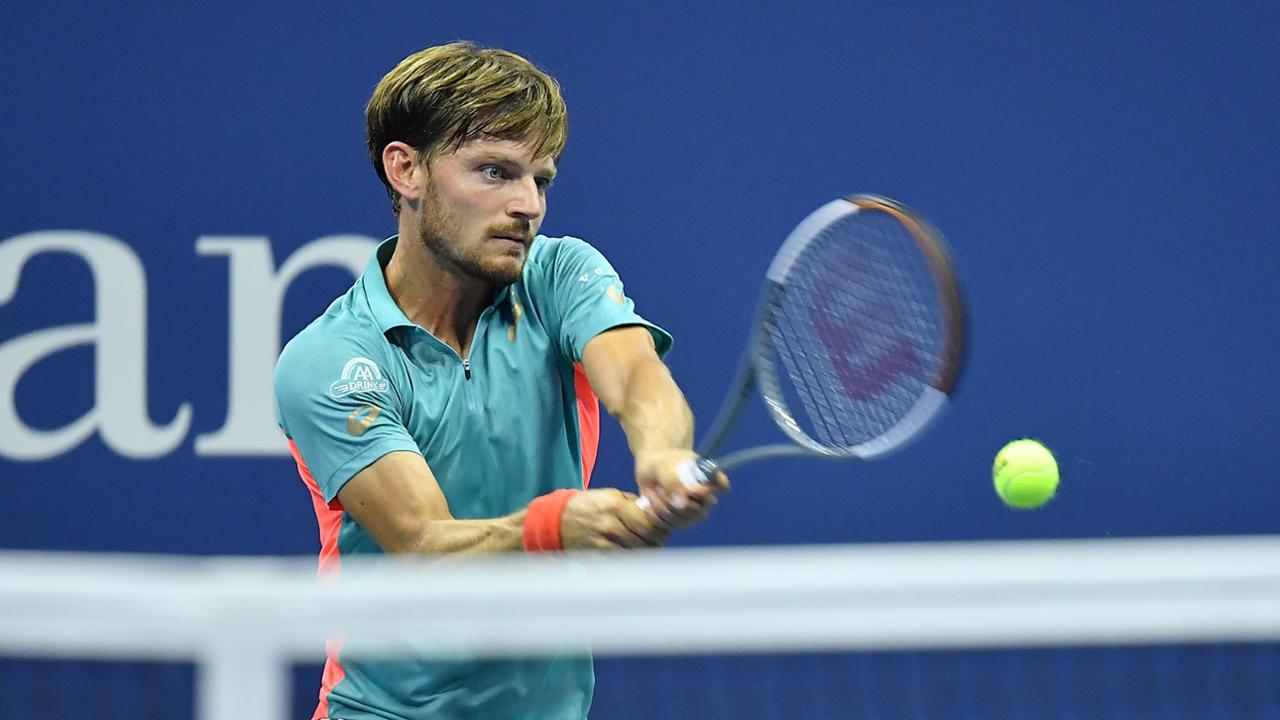 Goffin started well but was unable to sustain his level against Shapovalov, who grew in confidence

Instead Shapovalov made him uncomfortable, stifling his game enough to hit less winners and importantly feel the pressure on the Belgian’s shoulders. After all, Goffin turns 30 in December and has reached the fourth round of this competition four years running.

He hasn’t surpassed this stage at Flushing Meadows though. Novak Djokovic’s disqualification earlier in the day would have been playing on his mind too – knowing full well that this was perhaps a golden opportunity for Grand Slam success here.

But his dogged determination to battle for every point, explosive movement, continued effort to fire powerful strokes during enthralling rallies while delivering excellently-timed aces time and again were too much gainst Goffin – becoming increasingly agitated as his lead disappeared.

In the third set, Denis won 88% of his first serve points, had more than double (14-6) Goffin’s winners and importantly mixed up his shot selection too.

Whether he opted to serve-and-volley or guide a forehand winner down-the-line, the 21-year-old was importantly consistent and continued growing in confidence.

Opposite him was an error-laden Goffin, who began missing easy shots and playing safe strokes to try and force Shapovalov into missing. They were effective for sustained periods in set one, but no longer by this stage.

His inability to make necessary adjustments or hit the sort of highlight reel winners he’s capable of on a more regular basis meant the onus was on Shapovalov to close out the match, rather than Goffin to get back into it as time wore on.

While he did well to keep the Canadian on his toes in set three despite giving up another break of serve, the same couldn’t be said for the subsequent finale.

Relinquishing his serve early on and suddenly finding being 2-1 down, rather typified how his evening had unfolded. He was 30-15 up but lost the next three successive points.

The first was a forehand down-the-line that narrowly missed, but he should have done better with. The next was almost a carbon copy, again misfiring with acres of space to aim at.

The third? An untimely double fault as Shapovalov bounced on his toes intently, aware of the opportunity in his hands.

2-1 eventually turned into 4-1, but not without a spirited display of defiance from Goffin during perhaps the match’s longest game. They exchanged winners but Shapovalov’s one-two punch: the brilliant backhand to set up a forehand winner, proved too much.

Shapovalov needed to recover from a set down and did so, to earn his first Slam quarter-final

Goffin saved four break points but a fifth was ultimately too big an ask as the Canadian fired a forehand down-the-line and he could only watch helplessly as it flew past him.

Despite keeping the scoreline respectable, the end was inevitable as Shapovalov was 5-1 up at one stage. Goffin ripped two succesive shots into the net at 5-3 on serve and that acted as the catalyst, allowing Shapovalov to take advantage once more and prevail on his third match point.

Statistic: Shapovalov is the first male Canadian into a US Open quarter-final in the Open Era. Last year, his compatriot Bianca Andreescu went all the way and won her first Slam.

Post-match comments and looking ahead

Shapovalov took the time to absorb the moment, knowing how significant this achievement is for him on a personal level – while also sharing his thoughts on Djokovic’s situation.

“It’s pretty crazy how far I’ve come but today was an extremely tough match against David. I knew it would be, had to match his stability and calmness – I’m definitely tired but super happy.

It was a tough tiebreak, he raised his level and it was too good from him – knew it was going to be a long match so went to the washroom and prepared myself for that.”

Just hours earlier, world number one Djokovic got himself defaulted after unintentionally hitting a line judge with a ball at the change of ends.

Shapovalov, who hit headlines three years ago for a similar incident, said he had sympathy for all involved and “feels terrible for everybody”, in what was an unlucky freak accident.

“It’s definitely not the way we wanted to have a new Grand Slam champion but it’s exciting to see so many young guys doing so well – opened up the draw quite a bit, great for them [other players] and everybody [fans].”

Finally on the threats world no. 27 Carreno Busta offers, he said:

“He’s super tough, similar to David. I think we’ve played 4-5 times and he’s up 3-1 against me, so yeah it’s going to be another long battle.”