#8 ranked Michelle Waterson and Angela Hill (#13) both had their say ahead of a momentous main event matchup at the UFC’s Apex this weekend, during Thursday’s virtual media day with reporters. It’s a big match for both strawweight contenders – who are coming off narrow split decision defeats in May, just a week apart. Who has the psychological edge?

Although Hill officially made her UFC debut earlier than Waterson, she’s facing a seasoned veteran this weekend in an encounter which could decide plenty as far as the strawweight division is concerned.

As both fighters stressed during their media obligations, the level of competition is fierce but equally there’s also a genuine opening at a title shot in the not-too-distant future.

Current champion Weili Zhang (21-1) defended her title in a Fight of the Night encounter against Joanna Jedrzejczyk just before the pandemic prompted a worldwide suspension of play.

When you break it down like that, there’s certainly movement to be made across the rankings in the coming months. Waterson has lost her last two fights against Jedrzejcyzk and most recently by Esparza at UFC 249, but was honest about what she’s planning to do this Saturday night. 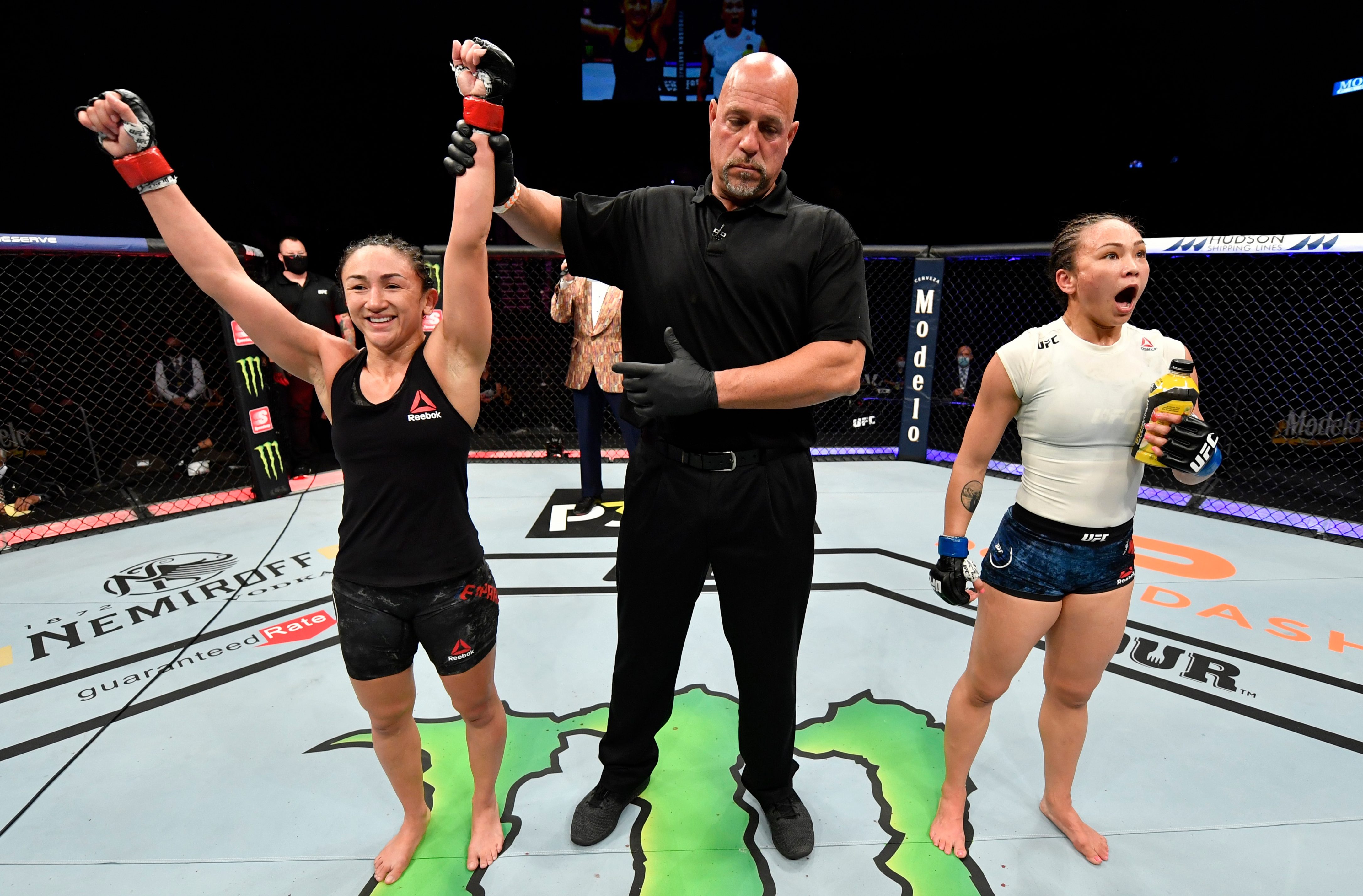 “I’m excited to get in there and throw some leather. I’ve learned to not be so hung up about strategy, everything happens for a reason and I can’t leave it [fights] in the hands of the judges.

It was my fight to win [against Esparza] and it slipped through my fingers. It was close but didn’t have to be. I’ve been doing mixed martial arts for over 25 years, it’s insane I don’t unleash all my tools so I’ve embraced this fight camp, utilising those tools, to not restrict myself from any of it.”

On facing Hill, she’s prepared to clash against a similar hungry adversary:

“Angela has done an amazing job climbing the ranks, her skills have only been improving but I never underestimate any of my opponents.

I found myself falling into the trap of looking ahead, mapping out my journey and all that does is distract me from being in the moment.

I’m not going to force anything but the motivation, for sure, is to finish the fight. We’re both hungry and want to get back into the win column, I know she is, but I’m starving.” 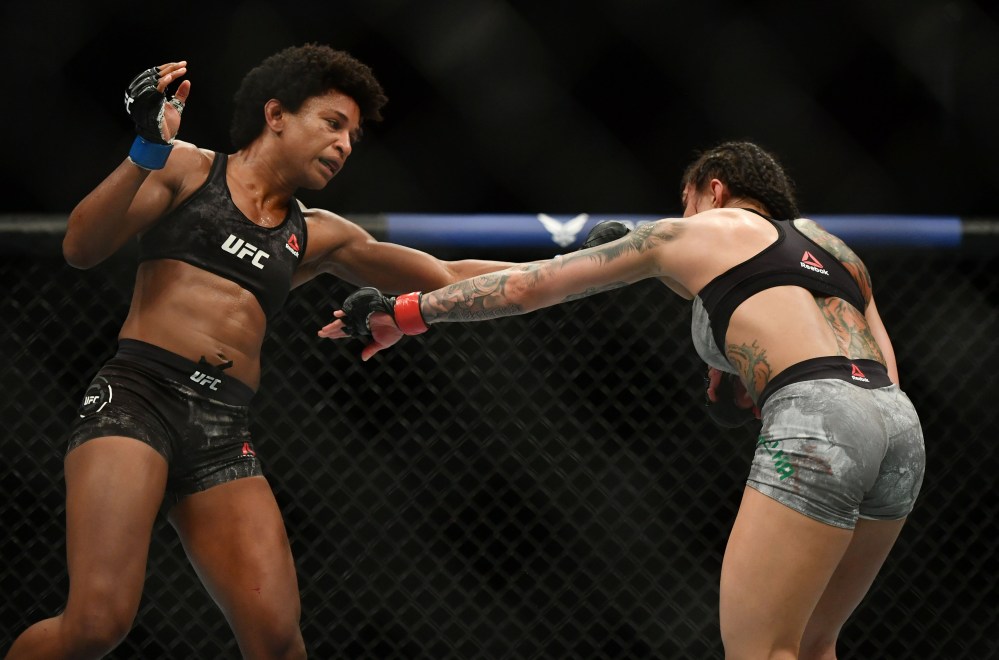 Hill meanwhile, will make history this weekend by becoming the first black American to ever headline an official UFC event. It’s been a long time coming for the 35-year-old, who was originally released by the company at the end of 2015.

“I lost to two really good opponents, Rose [Namajunas] and Tecia [Torres] when I got cut. Went on a four-fight win streak, won the Invicta title, faced Andrade on my return when no-one wanted to fight. Even when I lost, I didn’t get the respect that people who paid attention felt I deserved.”

She has her eyes on UFC gold, sooner rather than later, and credits her mental resolve and determination to improve as important in her development as a fighter.

“When I do get that title, I know I’ll keep it because I’ve had ups and downs, seen mistakes and been able to fix them. I can see the growth, how far I’ve come.

Co-main with Gadelha, now main event with Michelle, I’ve come far with my skills, what I bring to the division and it’s awesome to see it finally come to fruition after grinding for so many years.

It’s finally all happening and I’m excited. It’s hard to be proud, because I’m so hard on myself – I want to celebrate winning the main event, not just being one half of it.”

She described Waterson as a tricky opponent who has multiple weapons, from hip throws and quick ground transitions to other skills that frustrate fighters.

“I’ll be trying to hit her more and draw her attacks, push kick to the knee, all those little things she does to frustrate people.

Making sure I’m pushing the pace, not letting her get ahead with her volume, she usually gets decisions because of that in close fights, I have to be up in her face and mash her up!”

On just how important this encounter is for her:

“A big goal of mine is to become a finisher, I know I can, a win over Michelle will definitely put me up there – a win in my last would have put me there [already], so this is redemption.

I’d say someone in the top five, but if not, I’m calling out the champ. I saw an article saying Gadelha-Xiaonan for the next shot – that really pissed me off.

I [felt as though] beat both of those girls, if I need to fight again after this then I’m willing but a title shot would be fair.” 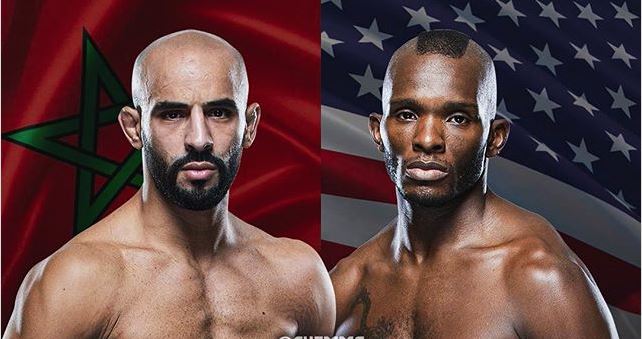 Co-main event: Azaitar vs. Worthy has all the makings of a compelling watch

In a rescheduled bout that has since been upgraded to the co-main event after Thiago Santos vs Glover Teixeira was shelved as the latter tested COVID-19 positive, Ottman Azaitar (12-0) will face Kharma Worthy (16-6) in an intriguing lightweight scrap.

Azaitar was full of praise for the UFC, describing it like the Champions League and saying he’s motivated even further to showcase his improvements in the Octagon as they’ve trusted him with this opportunity as the co-main.

“Fans want to see blood, knockouts, stand-up and we need to be grateful for them. I never give predictions but I can say that I’ve given my best in training and the same on the night too.”

Worthy meanwhile, said he’s been preparing for Azaitar from as early as January and saw a spike in popularity after his R3 guillotine choke victory in June.

He wants to bring “a-class violence” and having a dance partner like Azaitar with a 90% finish rate will make for compelling viewing.

“Being able to hear your opponent breathe, all of that is weird but everything is different and I’m expecting something a little different here too.

I want to be in good fights, plain and simple. I’m okay taking the risks of losing, so that I can get into a good fight.” 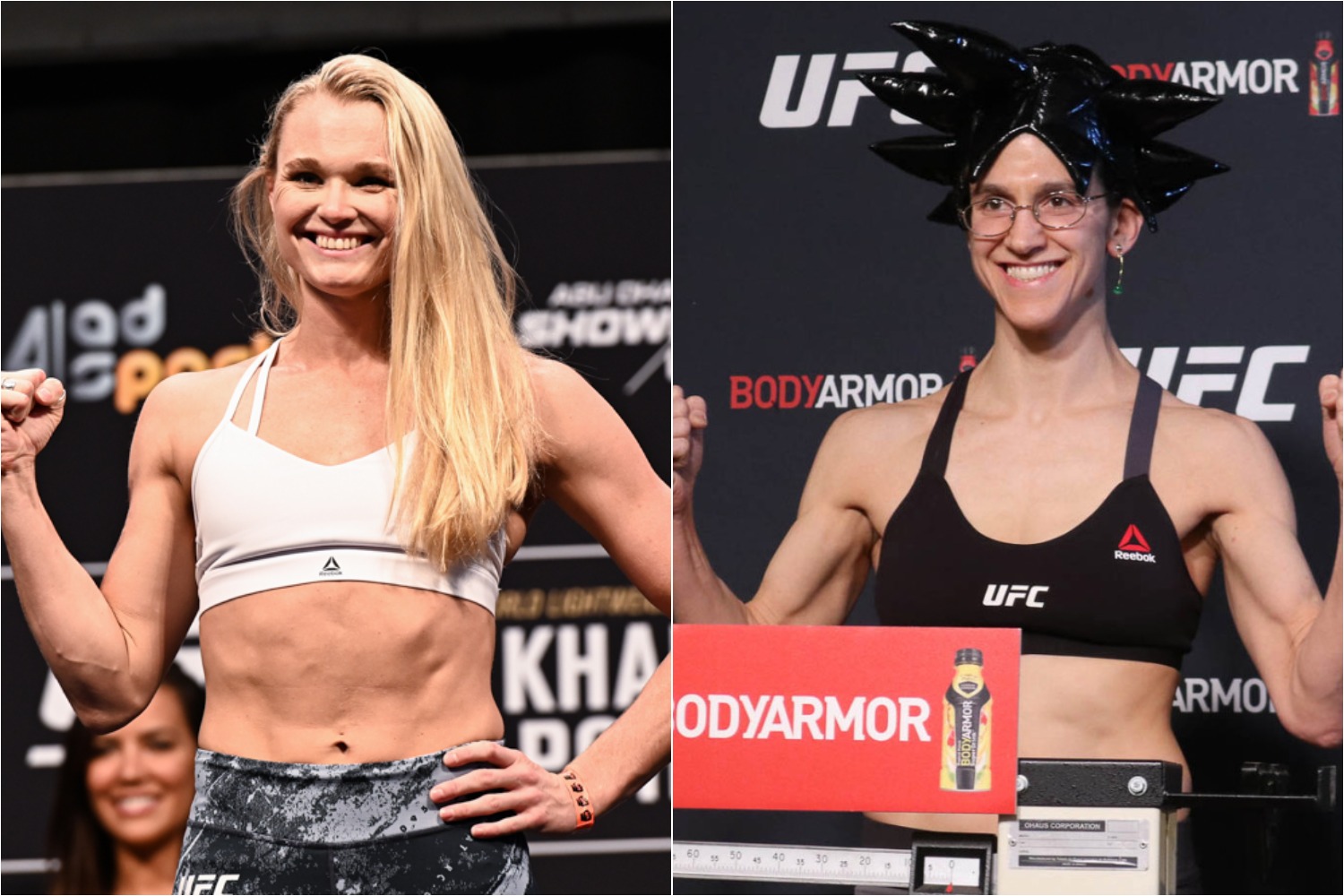 Lee (left) wants redemption in her rematch against Modafferi, six years after their first bout

In the women’s flyweight division, there’s a rematch between #8 ranked Roxanne Modafferi and Andrea Lee (#9) in a battle both appear determined to settle this weekend.

Roxanne said she wants to “smash” Andrea, isn’t focused on the rankings – before admitting they’re still important – and is looking forward to a fight that she’s hoping to finish.

“This fight camp was better, it feels great and I can’t wait to get out there.”

Lee meanwhile, is eager to put on a show and do so in style with a finish or by being aggressive en route to a bonus – specifically Performance of the Night – for her troubles.

“I was on a five-fight win streak, maybe losing these two helped propel me in a way. I don’t want to get cut from the UFC – it’s making me fight even harder to earn my spot in the rankings.”

She’s improved so much since that split decision defeat in December 2014 during their first matchup, at a time where she’d only had two professional fights beforehand.

It’ll be interesting to see whether the weapons she highlighted – wrestling, jiu-jutsi and takedown defence – have truly developed against a familiar foe. 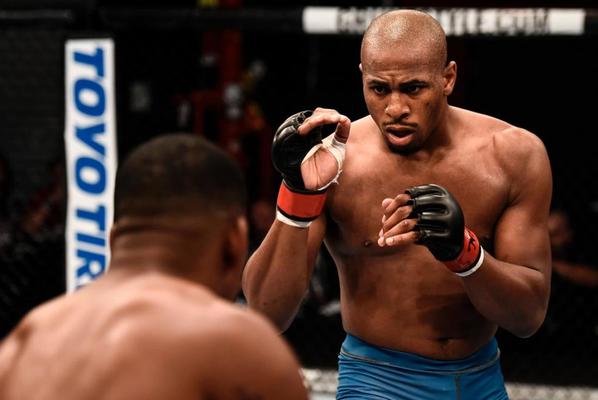 He’s not getting his hopes up though and said he was at fight week the last time before finding out that same day that his bout was cancelled, so nothing is final until they enter the cage.

I’ve been doing it for 20 years, each fight can be my last with injuries, all this COVID-19 stuff, fires, hurricanes etc.

All I can do is get the job done. I haven’t had the opportunity to fight in the Apex without fans before, it’s crazy but we’ll see.”

He also promised to give everyone watching “an amazing fight” between himself and Rodriguez, who is a left-handed striker that poses challenges that he hasn’t often faced in recent years.

“He likes to clinch, I don’t have animosity towards him which is good, it’ll be fun. I’ve had three full fight camps, not making any money or getting to fight.

I’m in the best shape of my life but at the same time no-one likes working for half a year without getting paid. A lot has happened, 2020 has been f—ed.”

Rodriguez meanwhile described his recent win as a rejuvenuating one after going 0-2 in 2019.

“This is the best opportunity for everybody. You can’t really do too much else besides train and fight, no clubs, restaurants and whatnot so there’s no excuse. Being able to spring back into the win column was amazing, I needed it.”

On the prospect of facing Herman, he offered praise for a veteran who presents multiple threats.

He described him as a tough, very tanky [durable] opponent who he won’t just blast into submission in the first-round. Instead, he revealed he needs to stay persistent and disciplined, otherwise he’ll be drawn into a brawl in a real clash of styles. 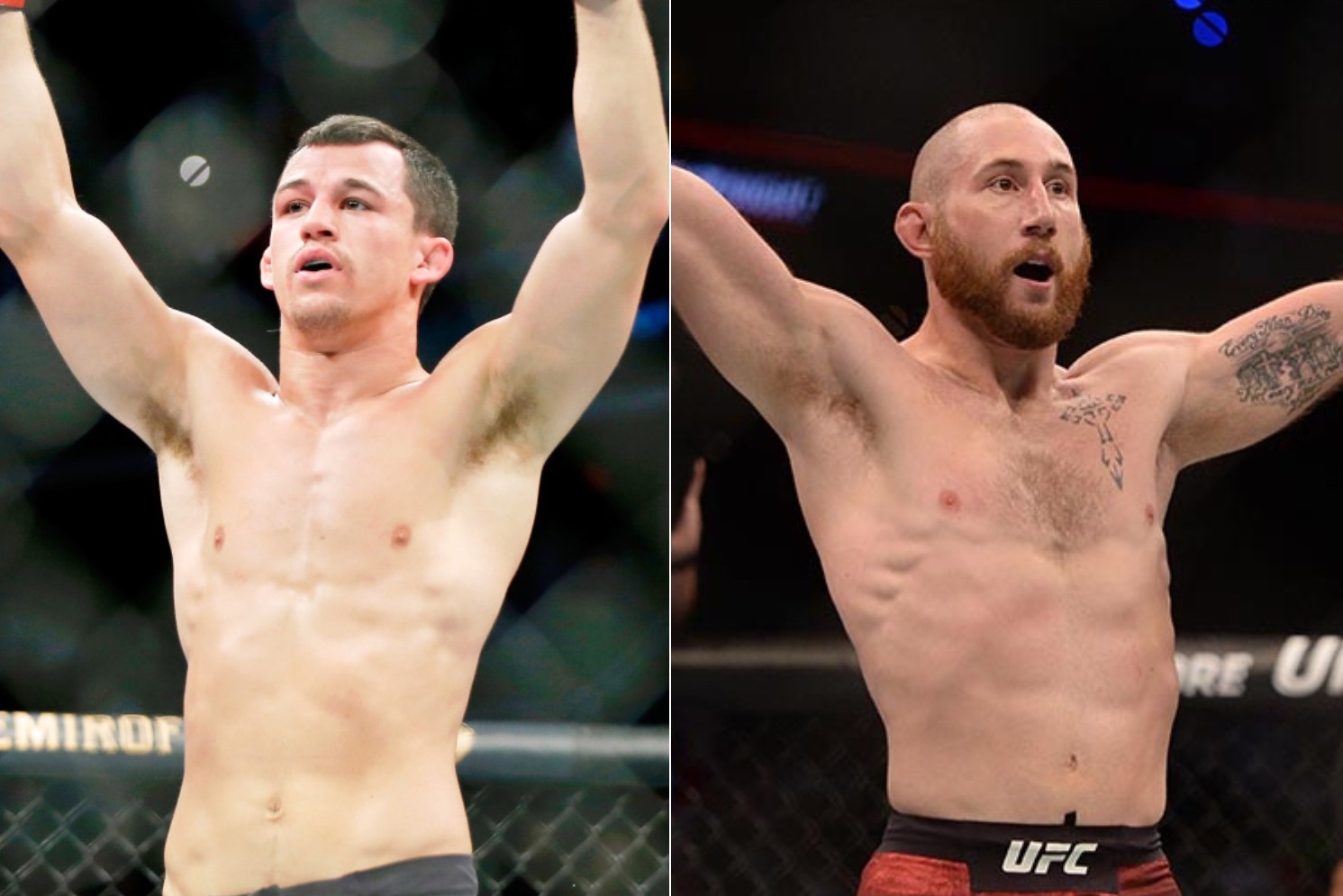 Quarantillo said he gladly took the first opportunity offered after testing positive for the coronavirus recently. Wanting to be a big star in the sport, he said he believes the reason they’re scheduled to start this main card is because the bout itself can produce fireworks.

Although he’s not overlooking Nelson, he feels it’ll soon be time to step up the competition levels he’s facing. He needs to “keep winning, make a statement and go for a finish,” before revealing plans to target ranked featherweights in 2021 as his goal is to one day win the strap.

Nelson said it feels pretty good to have won his first UFC fight after three attempts and this Saturday will mark almost 365 days since his R1 TKO win in Mexico City against Polo Reyes.

“I’ve had a year since then to keep improving both physically and mentally, was too over-aggressive and searching for the knockout too much, everything came together well when I wasn’t forcing the issue.”

He also didn’t mince words about Quarantillo’s abilities and how he thinks the fight will play out.

“He’s well-rounded – more of a survivor than a killer – and not particularly dangerous. His best bet is a boring decision victory but I’m not going to let him do that. He’s got some hype behind him, I’m looking to extinguish that.

I come with power, speed, strength, if anything lands on Billy, he’s in trouble. I’d love a one-punch knockout, finish him early without any injuries and get ready for another fight.”

As usual, I’ll have a UFC Vegas 10 review after this weekend’s card.