Jaylen Brown had 26 points, Jayson Tatum added 25 with 14 rebounds and eight assists as the Boston Celtics finally retained their lead to halve the series deficit against the Miami Heat in the Eastern Conference Finals. Now, the onus is on Miami to respond accordingly – so how will Erik Spoelstra’s defiant players respond in an important Game 4? Struggle again or come out firing?

Miami Heat vs Boston Celtics: Can the C’s build after GM3 win?
Tip-off time: 1.30am bst

Boston could benefit from an extended weekend break and come out purposefully as they look to tie the series at two games apiece, but it takes two to tango.

How will Miami adjust after a disappointing showing over the weekend?

Bam Adebayo had a brilliant double-double (27 pts, 16 rebs), Tyler Herro enjoyed a play-off scoring high (22 pts, four threes) but besides them, there wasn’t much cause for encouragement from Miami’s perspective after a sobering Game 3.

Kemba Walker’s three-pointer saw them down 13 at half-time and unlike the series’ first two games, they were unable to claw their way back into proceedings.

Instead, a motivated Boston side only added to their advantage after the interval – keeping them at an arm’s length throughout.

It was the sort of display most had expected from the start after their gritty seven-game series win over Toronto, but Miami should have expected this would come. Now though, they’ve had multiple days of recovery to watch film, learn from their mistakes and come out firing in Game 4.

Collectively, they had one less turnover and five fewer fouls committed but their shooting was poor. 27.3% (12-of-44) from three-point range, when you consider Herro and fellow sharpshooter Duncan Robinson combined for eight made threes? Not good enough.

Jae Crowder and Goran Dragic both shot 2-of-10 from the field, while Jimmy Butler’s offense came in spurts and nor he or Bam were able to stop the bleeding for long. How do they respond here?

It was bound to happen at some stage, but Dragic endured his worst shooting night of the postseason in Game 3 and will be desperately targeting a return to his impressive ways here.

The last time he scored less than double digits? Their final game before the coronavirus shutdown in March, a defeat against the Charlotte Hornets.

He had 11 on 2-of-10 shooting, though that wasn’t the only issue. Being a primary ball-handler is tricky, especially in playoff basketball where different teams set traps and are actively looking to make the most of every possession.

With a game-high five turnovers, the 34-year-old was unsurprisingly their worst player in terms of plus/minus (-29), committed four fouls and suffered a rough evening altogether.

If he can return to form – even if not at an efficient shooting clip – Miami’s chances of winning significantly increase. Otherwise, this could well be 2-2. 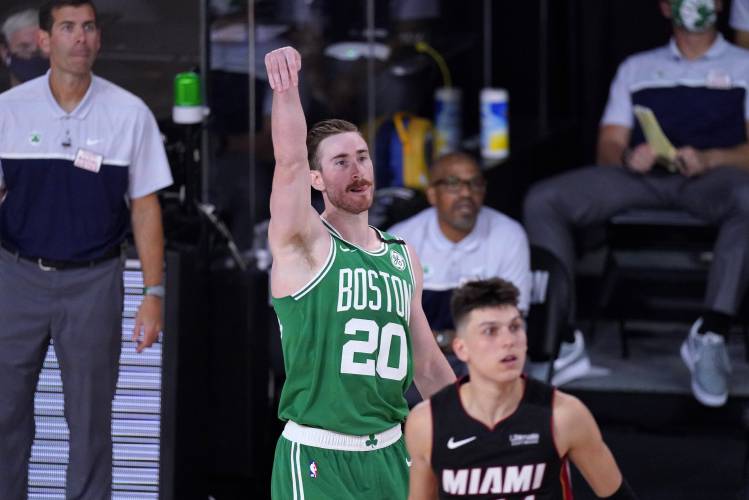 Having returned from an ankle sprain that sidelined him through the first two series matchups after falling awkwardly in Game 1 against Philadelphia, now is the opportune time for Hayward to make his presence felt.

He shot 2-of-7 from the field in Game 3 – his lowest scoring tally since early February, but we’ll give him a pass for obvious reasons. However, there isn’t much time for forgiveness in the postseason, where every possession is magnified and scoring contributions elevated.

Boston lack a reliable go-to option from the bench. Grant Williams’ defence has been admirable at times, while Brad Wanamaker has his moments, but neither are shooters.

Hayward is, but he has shown a capability to contribute elsewhere on the floor too. He had five rebounds, four assists, three steals and a block last weekend, so even if his shot isn’t falling, he’s still a key piece within Boston’s rotation.

Now that he’s back fully healthy, it’s important we see more from him.

Who’s most likely to win here? The breakdown

After their Game 3 success, ESPN’s Basketball Power Index predicts the Celtics have a 58.7% chance of clinching Game 4 and tying up an intriguing ECF matchup.

FiveThirtyEight’s win probability statistics are also backing a Boston win (55%), though there is not much between the pair and is evidenced by the percentages.

It’s a game of runs, but the Celtics’ inability to close out the series’ first two matches was troubling. Have they turned a corner or will they be down 3-1?

Prediction: An improved Heat effort but the Celtics to win, tying series at two apiece