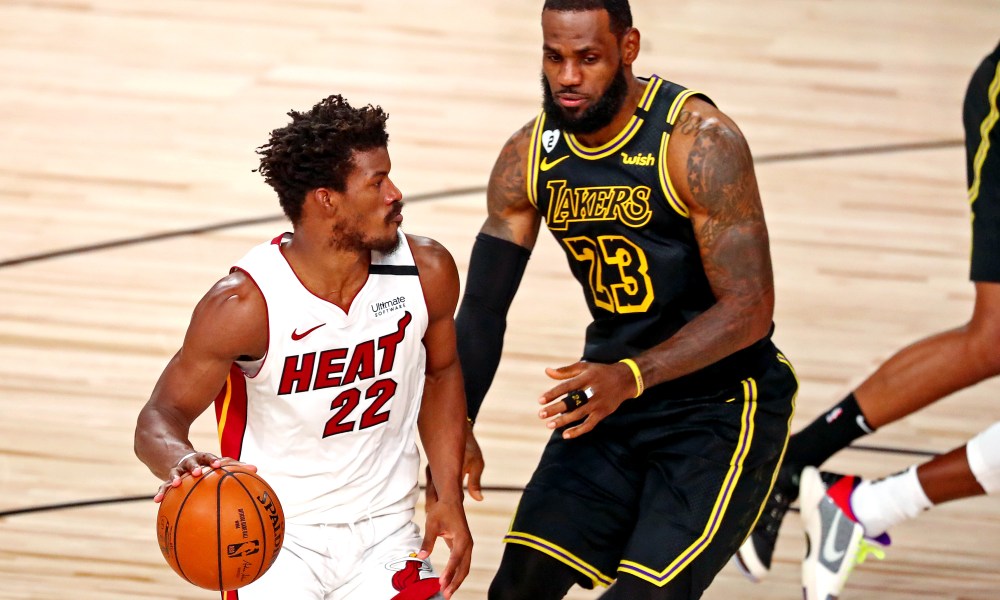 The trophy was ready, confetti and all. Yet the Los Angeles Lakers’ wait for another NBA championship continues into this weekend with Game 6 next on Sunday evening. Their two-game series lead was halved once more after another inspired Finals showing by Jimmy Butler and the short-handed Miami Heat – staring elimination in the face and rolling with the punches.

After exploding for a historic triple-double to halve the Lakers’ series lead in Game 3, Butler was again instrumental as Miami embraced their situation down 3-1 and responded fearlessly.

In truth, he needed to be. LeBron James caught fire early on 10-of-12 shooting from the field and did his utmost to keep the scoreline close, despite a sloppy collective start by Frank Vogel’s men.

They were down eleven at one point in the second quarter, but LeBron regularly made plays – either scoring himself or creating looks for others – to keep them ticking over nicely.

All things considered, they would have been happy to only be down four at half-time after some concerning looks towards Anthony Davis, who sustained an innocuous-looking heel injury. 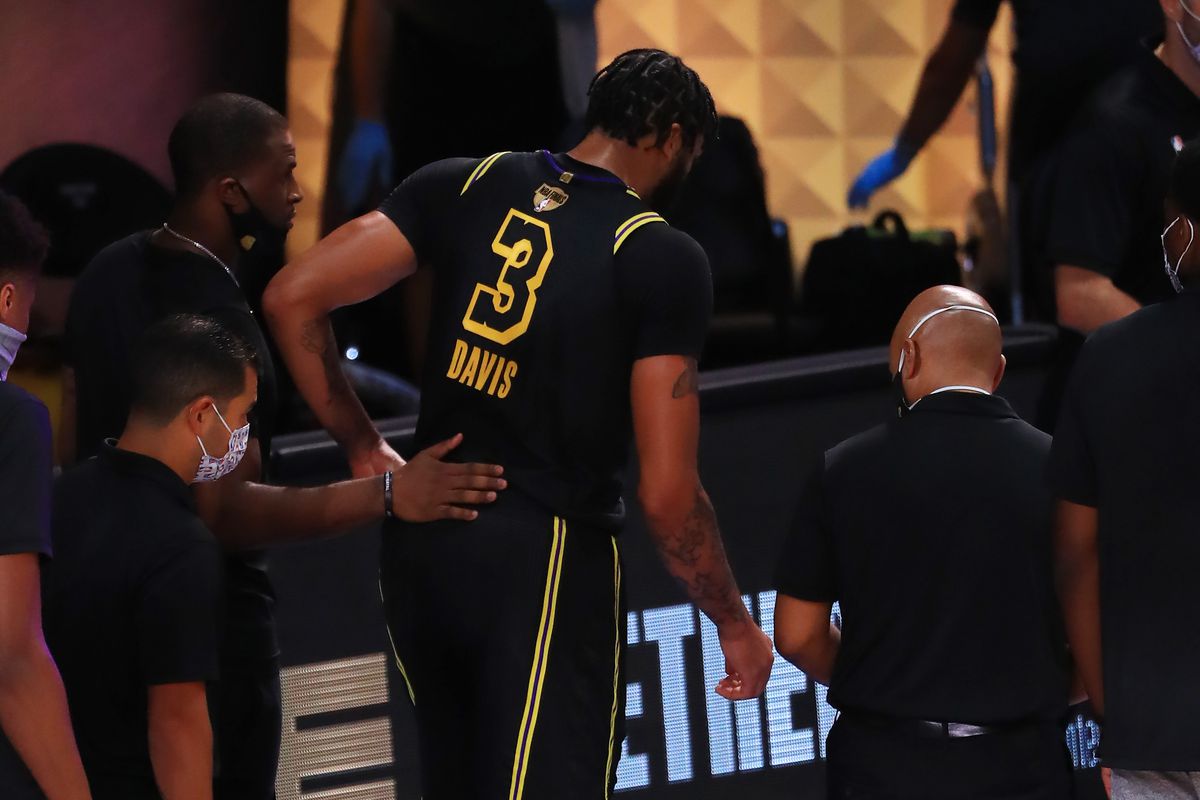 Davis landed awkwardly and injured his heel, but still finished with a double-double despite limping on

He continued but limped gingerly for large periods after the break, despite recording a double-double (28 pts, 12 rebs) and making multiple key defensive plays (three steals and blocks).

It’ll be interesting to see how Davis’ injury impacts his play in Game 6, another closeout game, after revealing post-match that he’ll play this weekend. Regardless, he won’t be at 100%.

Jae Crowder, who struggled with his shot and was unreliable in possession, shot just 22% (2-of-9) from three-point range – the worst percentage of any starter on either team.

Both of those threes came in a back-and-forth third quarter, which saw rookie shooting guard Kendrick Nunn quietly continue impacting the game with big plays from Miami’s bench.

Nunn delivers from the bench while Robinson shines for Miami

He had 14 points (6-of-11, two 3PM), four rebounds and three assists in 28 minutes. Lakers’ four-man bench unit by comparison, combined for the same amount on 5-of-22 shooting.

Duncan Robinson was on fire (7-of-13 3PM, 26 points) and alongside Bam Adebayo, helped Erik Spoelstra’s men open up their lead to ten with 10:31 left in the fourth quarter. 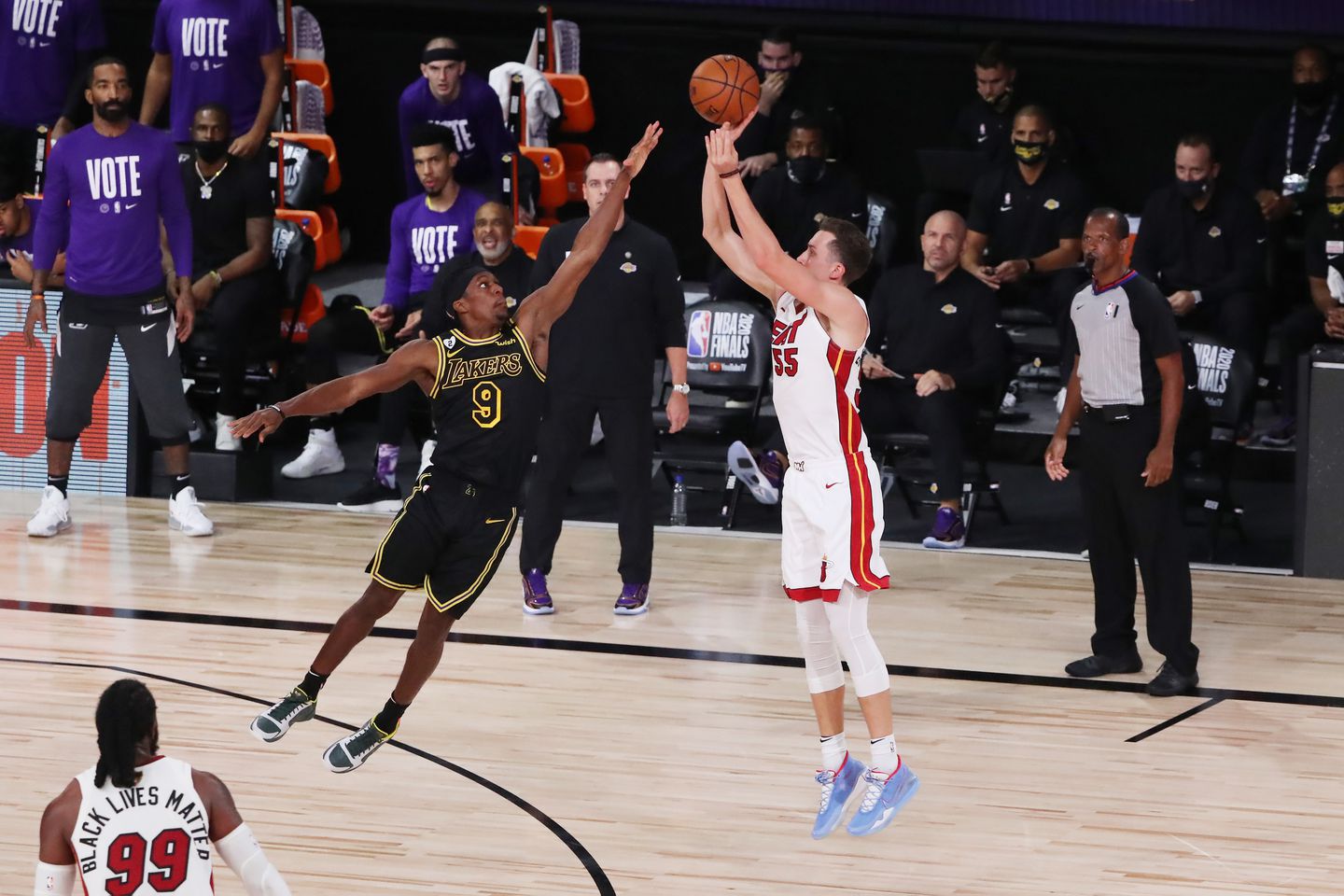 Robinson delivered his best postseason game yet with 26 points, 5 rebounds and two assists

As they’ve done on multiple occasions this postseason, the Lakers didn’t panic under pressure and instead went to work cutting down that deficit.

LeBron, Danny Green and Davis’ contributions, alongside a timely three by Kentavious Caldwell-Pope, gave them a 97-96 lead with 6:20 left. That championship grit, the ability to survive precarious situations without absorbing insurmountable damage, has helped LA.

They suddenly had their first lead since the first quarter and Miami needed to react fast, otherwise the season was over.

Adebayo and Robinson recorded important buckets as the time continued to tick down and LeBron found himself locked in a one-on-one battle with a determined Butler.

The pair exchanged shots and despite clearly being weary, didn’t shy away from the responsibility that comes as a team’s number one scoring option.

Butler and Tyler Herro made clutch free throws late on, sandwiched by a crucial Green three-point miss with seven seconds left and the Lakers down one with potentially the final play to seal championship glory.

It’s pretty hard to argue LeBron didn’t make the right play when this is the shot he created: pic.twitter.com/ZcQayQtKER

Alas, the Heat live to fight on another day.

What’s next? Game 6 awaits on Sunday

Butler played all but one minute, James logged 42 of the 48 allotted and it felt like this was a fitting end to a series many critics expected to be finished by now given the circumstances.

But as they’ve proven time and again during this postseason, you can’t count Miami out just yet.

Erik Spoelstra: "Every young player coming into this league should study footage on Jimmy Butler." Butler finished with 35 points, 12 rebounds and 11 assists in 47 minutes.

Considering Miami remain without a 20-point scorer in Goran Dragic (foot), the onus will be on the Lakers to end the series on Sunday evening – regardless of how they have to do so.