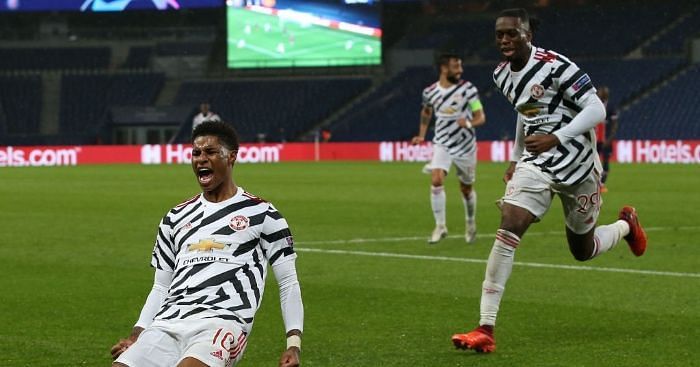 Marcus Rashford was a matchwinner in Paris for the second successive year as Manchester United left it late to sink Paris Saint-Germain on MD1 of the new 2020-21 Champions League campaign, inflicting the Parisiens’ first UCL home defeat for 16 years with aplomb after 87 minutes. What were five talking points from their last-gasp victory here? Read on…

In a match the visitors started well and punished a sluggish PSG side, they earned a slender advantage after Anthony Martial was fouled by Abdou Diallo inside the area.

Keylor Navas’ initial save to thwart Bruno Fernandes was waved off after VAR review showed the goalkeeper had enroached from his line before the spot-kick had been taken. Up stepped Bruno again and a second time, he made no mistake.

Paris Saint-Germain couldn’t play much worse than they did in the opening 45 minutes and on cue, they soon found an equaliser. Kurzawa rattled the crossbar with a cross-cum-shot, before Neymar’s corner was inadvertently headed goalwards by Anthony Martial.

Ole Gunnar Solskjaer made tactical changes of his own, introducing Paul Pogba into the fray while changing the team’s shape. The game became more open as time ticked by and despite both sides having opportunities, it was substitute Pogba who had a lasting impact.

He showed good spatial awareness and composure to hold up possession with his back to goal, before teeing up Rashford to his left. The 22-year-old still had plenty to do, advancing beyond Danilo Pereira with one touch and striking goalwards with the next.

Keylor Navas, who had twice denied him, could do nothing to stop this effort as it cannoned in off the far post to secure a hard-fought United victory. Without further ado, here’s a look at five talking points from another memorable Parisian night for United: 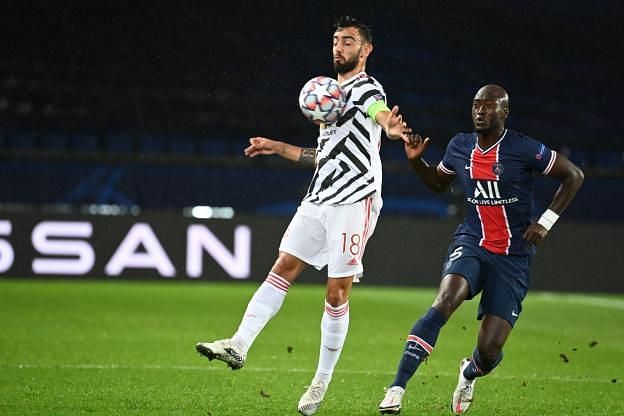 Pereira was the best of PSG’s midfield, but unable to stifle United as he would have wanted

A trident of Ander Herrera, Danilo Pereira (on-loan from Porto) and Idrissa Gueye found themselves frustrated in various ways, not allowed to really impact the game until it was too late.

Herrera, who spent five years at United, was caught ball-watching on a few occasions as United soaked up pressure and continued hitting them with counter-attacking moves.

Danilo regularly dropped into central defence to receive possession and scanned for options with a progressive pass in mind – futile with limited supporting movement.

Gueye has now only played two sides more often than United in his career (Lyon and PSG), but the former Everton man couldn’t get into a defensive rhythm and was on the periphery before being sacrificed at half-time. 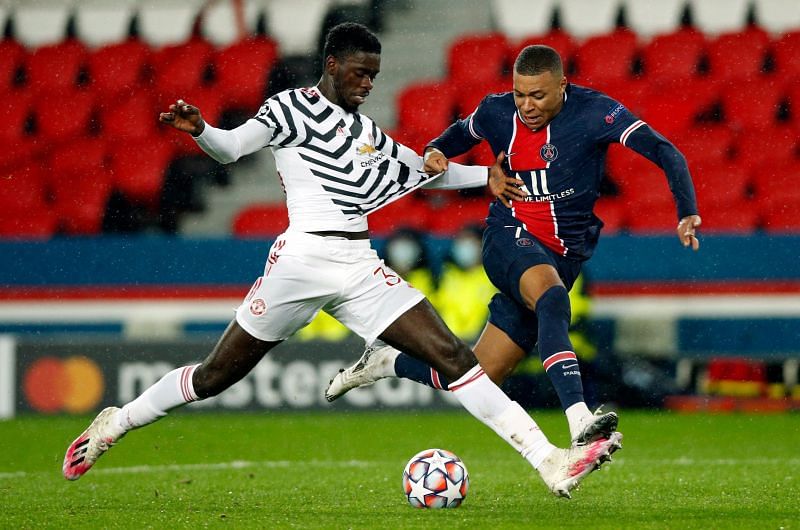 Tuanzebe excelled vs. Mbappe and co, displaying composure and maturity beyond his years

After being dismantled 6-1 at home by Tottenham just 16 days ago, Manchester United have responded well with two morale-boosting late victories against Newcastle and PSG.

Sure, the situations are different but they could’ve easily lost both games – conceding freak own goals in successive matches (Luke Shaw, Martial) can deflate a team’s confidence so easily, especially when they did.

Fernandes sparked their late flurry on Tyneside this past weekend but it was their defence which excelled against a far superior team than Steve Bruce’s here.

Shaw has been the ire of United fans for far too long and much of it is unwarranted, given what he provides across the pitch without making a real fuss most weeks.

On the left-hand side of a three-man central defence, he made a handful of important clearances and defensive interventions while his surge forward helped create their opener.

Alex Telles, a £13.5m signing from Porto on deadline day, seemed more focused on creating chances (three key passes) than defending them but did his reputation no harm against a PSG side not regularly attacking down his side.

Victor Lindelof’s inconsistency has often been a problem, though the Sweden international stood firm in central defence and his defensive positioning was key.

Axel Tuanzebe, unfortunate with untimely injuries and forced to wait patiently, has helped him in the long run. His blistering turn of pace, coupled with a level of assuredness many wouldn’t have expected, saw him rightly lauded in duels against Kylian Mbappe and co.

Champions League debutant Aaron Wan-Bissaka? More on him later too. 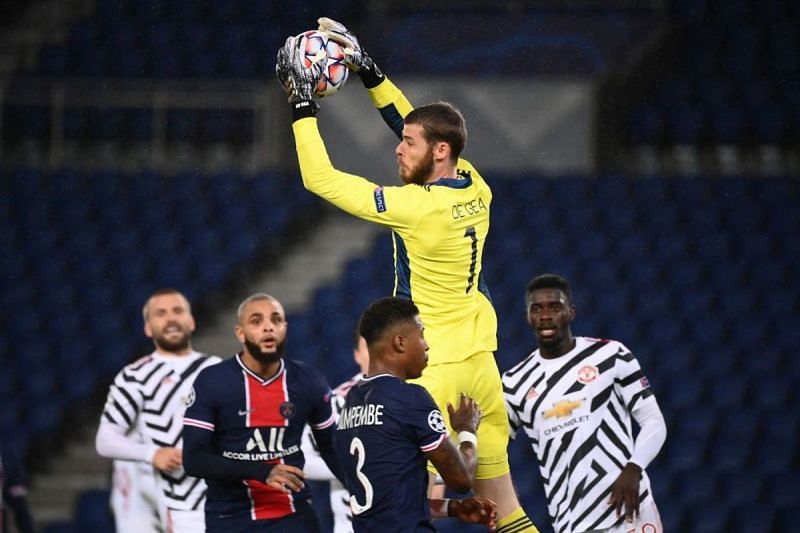 In many ways, this game was symbolic for two goalkeepers underestimated and heavily criticised in recent seasons.

de Gea’s decline has been well-documented, with a string of poor mistakes and questionable decision-making combining to make him resemble a ticking time bomb.

It got to a point where many critics questioned whether Dean Henderson – who spent two years on-loan at Sheffield United – would return and overtake him as Solskjaer’s first-choice going forward.

The 23-year-old, who has been there for nine years and counting, watched from the bench as his teammate flourished in-between the posts. He needed to. Paris Saint-Germain could’ve easily been 2-0 up without really trying, had he not denied di Maria and Kurzawa early on.

He made five saves for United and important stops too. The last time he reached that number, was during their 3-1 FA Cup semi-final defeat by Chelsea in mid-July, where again he made mistakes for two goals.

At the other end, Keylor Navas ended up on the losing side but acquitted himself well and was unfortunate.

Having departed Real Madrid in a £13.5m move last September, many felt the Costa Rican had regressed to a point where he was expendable – after five successful years in the Spanish capital.

It’s why exceeding his former side’s achievement last season would have meant a lot to him, and although he also has poor games from time-to-time, isn’t declining as quickly as you may believe at 33-years-old.

He made an excellent diving stop to save Fernandes’ initial penalty, only for it to be retaken after enroaching off his line during the Portuguese’ run-up.

Rashford’s winner was drilled into the bottom corner, cannoned in off the far post, and he could only look helplessly at his defenders – who just didn’t do a good job protecting him. 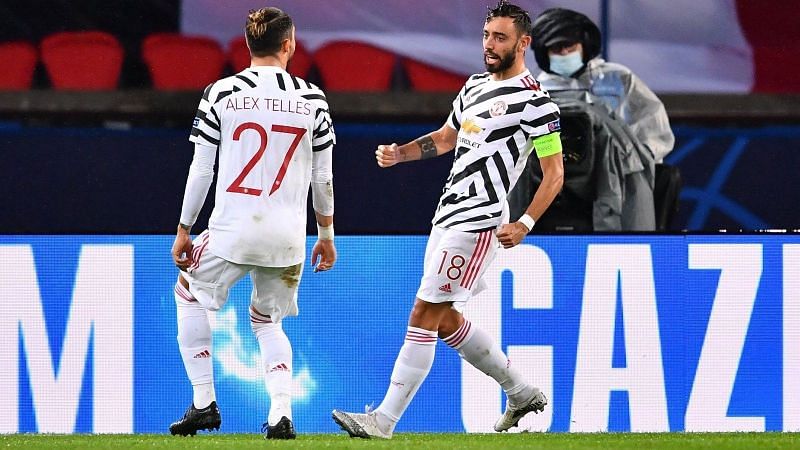 Fernandes celebrating his first-half opener, but there was far more to his game than just that

A lot will be said about Rashford’s late winner, Neymar’s disappointing display and de Gea’s resurgent performance but Bruno Fernandes led by example as Manchester United weathered an inevitable storm to emerge victorious against a lacklustre PSG showing.

After his surprised reaction during Solskjaer’s pre-match press conference, confirming he’d captain the side here, there was always going to be additional focus on his shoulders.

Harry Maguire’s form has dipped in recent weeks and with an industrious midfielder guiding his team forward, they didn’t miss their £80m defender here.

He showed composure to retake his saved penalty, when others might have shied away from the responsibility – having missed one at Newcastle last weekend. It’s a cliched phrase but he did lead by example and it’s remarkable to think he’s only been a United player for ten months.

His defensive work off-the-ball and discipline when tracking back were evident (five tackles, one clearance), while able to help orchestrate counter-attacks with incisive passing.

Ultimately, decision-making fell sort of the high standards he sets, choosing the wrong pass or shooting with forward options in support.

Importantly, he didn’t let his head drop and returned to his persistent ways, doing his utmost to create chances from seemingly nothing at times while proving a constant nuisance that PSG couldn’t handle in transition. 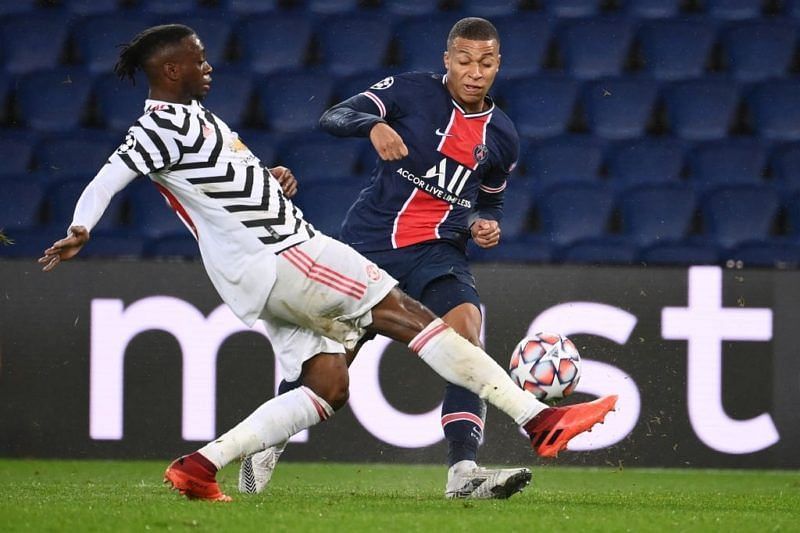 Despite conceding a first-half penalty, you could make the case that Abdou Diallo was PSG’s best player.

On his Champions League debut though, Aaron Wan-Bissaka shone as he usually does – successful tackles galore, frustrating PSG’s attackers as a relentless defensive pest and sticking to them like glue throughout – refusing to relent or tire.

He made a game-high six tackles, two clearances and interceptions to go along with a big blocked shot as Mbappe was baring down on goal dangerously in the second-half.

Winning possession in his half, then driving forward with supporting runners flanking him, helped him quickly earn respect from Mbappe-Kurzawa and everyone pondering whether to attack down his side of the pitch.

On the odd occasion that he slid too early or was beaten to the ball, Tuanzebe was on hand to sweep up the danger effortlessly. No wonder PSG players were so frustrated.

Everyone discusses his creative deficiencies, but defence is of paramount importance and in tightly-contested games against Europe’s elite, Wan-Bissaka’s off-the-ball abilities will far exceed those of an attacking nature.

If beating PSG like this is just the start, it’s certainly a purposeful one he won’t forget for a while.