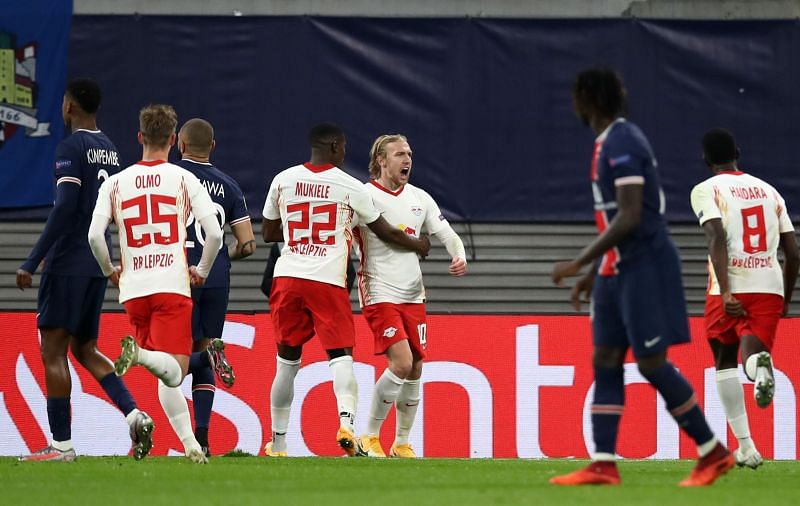 It was a classic tale of two halves at the Red Bull Arena, as RB Leipzig displayed guile and determination to overturn a precarious deficit, beating PSG 2-1 to make Group H an even more intriguing story in this season’s Champions League. Who struggled while others excelled on an evening where last year’s finalists were left with nine men by full-time? Read on for more…

Goals from PSG academy product Christopher Nkunku and an Emil Forsberg penalty helped Julian Nagelsmann’s side take the lead, though things could’ve been much different earlier on.

Ángel di Maria showed steely composure to open the scoring six minutes in, after Everton loanee Moise Kean pounced on Dayot Upamecano’s mistake in possession and teed up the Argentine.

Ten minutes later, Peter Gulacsi made his first and only save of the evening – thwarting di Maria’s penalty, after Upamecano was harshly adjudged to have handled Kean’s goalbound strike.

There was an overriding sense that justice was served in that moment, but Leipzig’s high defensive line and persistent fouling meant more goals would inevitably follow.

di Maria and Kean both had goals correctly disallowed for offside, before Nkunku’s well-taken equaliser just before half-time.

The hosts knew they could play better in the second-half, and duly punished PSG after the interval. After missing a potentially excellent solo finish minutes earlier, Forsberg finished from twelve yards after Angelino’s searching pass towards him was handled by Presnel Kimpembe.

di Maria was PSG’s sole danger man throughout but even he couldn’t spearhead them to victory without superstar duo Neymar (thigh) and Kylian Mbappe (muscle) among others.

The match gradually unravelled before Thomas Tuchel’s eyes, as Idrissa Gueye and Kimpembe were both sent off after committing late challenges while booked from the first-half.

Leipzig had chances to add further gloss on their spirited display, though scrutiny will be placed on Tuchel after his team selection – playing Herrera, Marquinhos and Gueye in a midfield trio was alarmingly conservative. 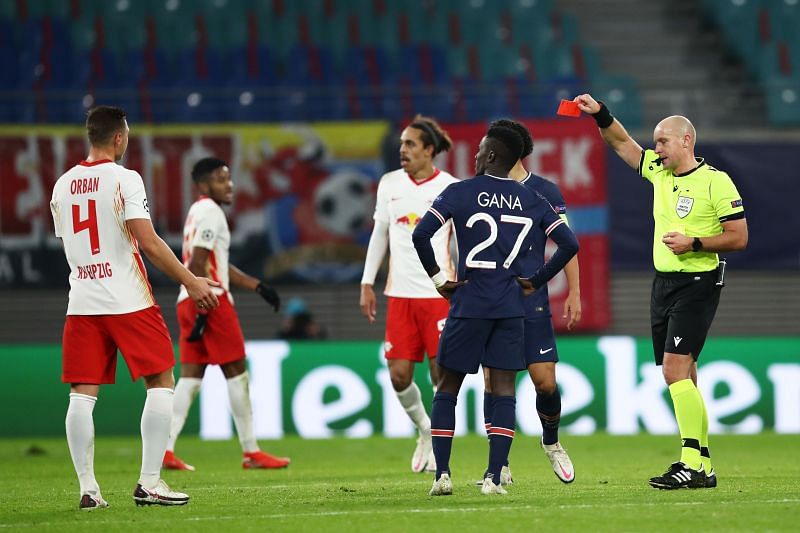 Gueye can’t believe it, as ref Szymon Marciniak shows him red at a crucial moment in the second-half

After playing 45 minutes before being hooked against Manchester United and making a brief cameo during their win over Basaksehir last week, Gueye was rewarded for his solid showing away at Nantes over the weekend with a start here.

Playing as the right-sided midfielder in a trio with Ander Herrera and Marquinhos, you could be forgiven for not really noticing the former Everton man during sustained periods in the first-half.

It wasn’t that he played poorly, but Leipzig were repeatedly being pinned back into their defensive third and needed to defend in numbers to survive PSG’s waves of attacking pressure.

Even with the visitors’ injuries, this game was calling for someone like Leandro Paredes or their free summer signing Rafinha Alcantara to create chances from deep and provide a clear bridge between midfield and the final third.

Instead, di Maria was required to do too much and his deep-lying teammates were more conservative in possession and measured in their efforts to drive forward.

Gueye was actually fouled more (5) than he committed late challenges (3), but that statistic doesn’t excuse his inability to manage the game wisely at a time where the last thing PSG needed was a numerical disadvantage, having just conceded again.

Only Layvin Kurzawa (72.7%) had a worse pass success percentage than the Senegal international, who desperately tried to argue his case afterwards but only had himself to blame.

He’d played too safe and when he needed to show some discretion in the tackle, was left wanting. 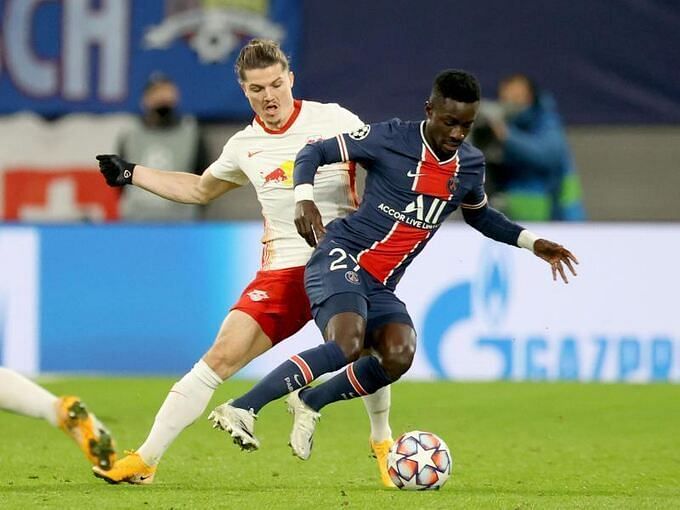 In the first-half, you could see Sabitzer was visibly unhappy with the way Leipzig had started and was forcefully trying to create chances while retaining possession higher up the pitch.

It didn’t always work but gradually, he – among others – grew into the game as it wore on and was quietly making multiple key defensive contributions which set the hosts on their way to overcoming a PSG side who failed to take full advantage of their early lead.

One particular instance was early in the second-half, where he effortlessly stripped di Maria of possession in midfield. That moment indirectly helped create Forsberg’s big chance, one he ultimately blazed over the crossbar, but you could sense a drastic shift in momentum.

di Maria’s body language told the story – suddenly it was PSG who were being suffocated, rather than their hosts, and captain Sabitzer was unsurprisingly key to them succeeding in this way.

He created promising opportunities for Nkunku and substitute Yussuf Poulsen, the latter was inches away from latching onto his pass while the former fired narrowly wide.

The credit will understandably go to Nkunku and Forsberg as the goalscorers, but without Sabitzer’s tireless dirty work in midfield, it could’ve been a different story. 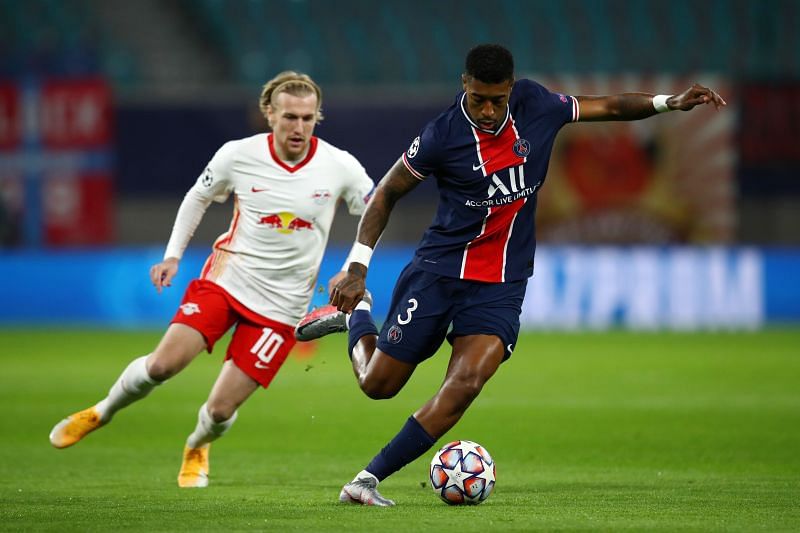 The frustrating thing about Kimpembe is that some weeks, he looks like one of the world’s best central defenders. Other weeks, he plays like a liability with a mistake waiting to happen.

At 25 and on his 150th PSG appearance in the fifth Champions League campaign of the World Cup winner’s career, he’s still making needless mistakes that are costing his teammates.

That’s not to say they would’ve won this game had he not given away a preventable penalty and got himself sent off deep into stoppage-time for this petulant sliding challenge, but still:

Presnel Kimpembe was on a yellow card for PSG.

Presnel Kimpembe then did this. pic.twitter.com/8FQMw3hhhE

Marquinhos’ venture into central midfield is one that should show faith in his defensive teammates, but Kimpembe alongside error-prone Layvin Kurzawa and Porto loanee Danilo Pereira – a defensive-midfielder by trade – perhaps they were asking for trouble all along.

Sure, it worked well enough against Basaksehir and Nantes last week but Leipzig are a far better team than both, even with some key players missing themselves.

Nkunku’s equaliser came from Pereira’s side of defence, so Kimpembe was essentially a pedestrian for an hour and change before Leipzig charged forward after Gueye’s sending off.

He made an inch-perfect sliding tackle, thwarting Poulsen as he shaped to shoot inside the area, but that excellent defensive moment was in stark contrast to just how he gave away the penalty.

Rather than let the lofted ball come across him and control it that way, he handled it and hoofed the ball clear as if there wasn’t multiple cameras around the stadium capturing what he’d done.

In moments like these, he’s really his own worst enemy. 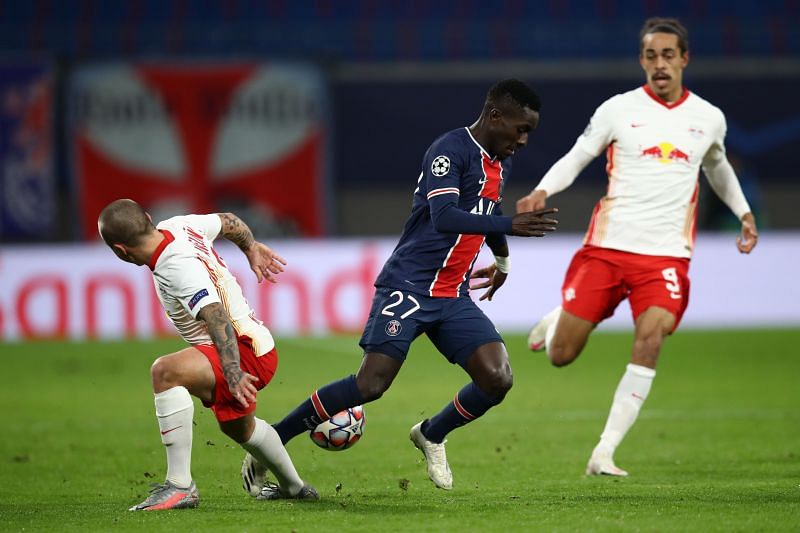 I could’ve gone with goalscorer Forsberg here, but instead chose someone who doesn’t tend to get enough credit for his efforts on both sides of the pitch – Manchester City loanee Angelino.

Since joining in January, the Spaniard has slotted in seamlessly to the way Nagelsmann’s side play and again here, he was making himself available as a wide option and didn’t shy away from his defensive responsibilities either.

He’s improving all the time, earning valuable minutes that wouldn’t be guaranteed elsewhere and it’s no wonder they have an appearance-based obligation to buy him for £16m permanently next year.

He made five tackles, four key passes and along with Nordi Mukiele down the right-hand side, constantly provided width during a match where Leipzig seemed short of ideas early on.

Without his persistence and ability to spot potential openings before they arose, this would’ve been a much more difficult task overcoming PSG’s slender advantage.

It was his clever pass that teed up Nkunku, before firing another searching ball towards Forsberg in the second-half which resulted in their matchwinning penalty.

When things didn’t go his way, he didn’t complain – just got up, quietly did his job and played a pivotal role in their comeback. 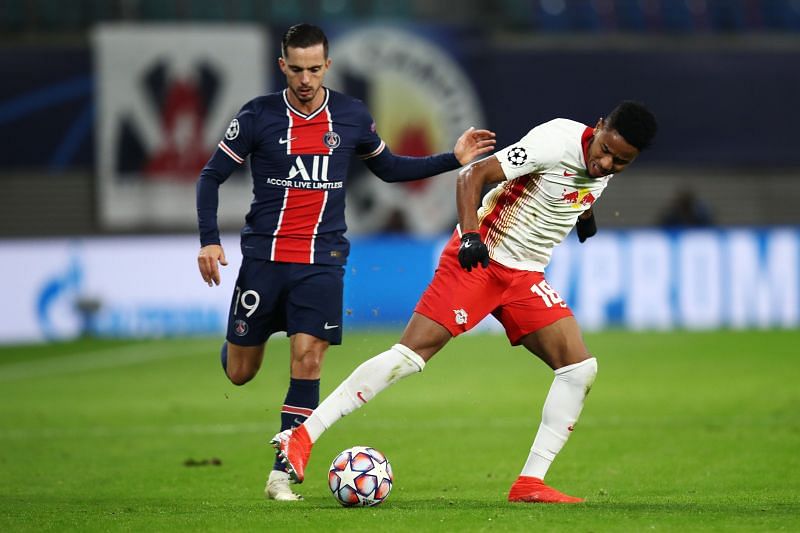 Nkunku’s first-half equaliser was neatly finished, but the winger’s insistence on tracking back caught the eye

Eleven weeks ago, I didn’t mince words when describing Nkunku’s quiet, frustrating display against his former club in perhaps the biggest game of his career to date.

So it seems typical that here, in a repeat of last season’s Champions League semi-final – albeit in different circumstances – the Frenchman finally haunted his former club, the same way Kingsley Coman did in the UCL final.

If the only blemish on his performance, besides a missed opportunity to complete the brace, was his tendency to go down rather theatrically, then you know it was a productive evening’s work.

Thomas Tuchel even confronted him about that at one stage in the first-half, such was the 22-year-old’s inclination to roll around multiple times whenever he was fouled.

If anything, it made him an easy target for their cynical but very necessary challenges. But ultimately, PSG players just didn’t have an answer for their academy graduate.

No Leipzig player was fouled more than him (4) over 90 minutes and it showed, such was his ability to win duels and willingly track back with a slender advantage to protect.

After keeping successive clean sheets last weekend, there wasn’t much Keylor Navas could do to stop Nkunku’s strike as it nestled into the bottom corner.

Fired low and hard through traffic, it was the eureka moment Leipzig needed to assert themselves in a match that was still up for grabs. With Nkunku in tow, they did just that.