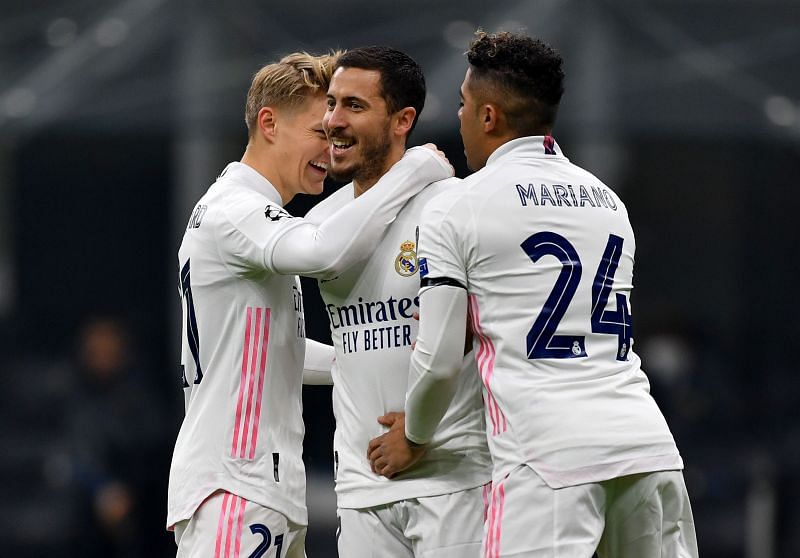 Eden Hazard’s penalty and an Achraf Hakimi own goal just before the hour mark proved the ultimate sucker punch as Real Madrid cruised to a 2-0 win away at Inter Milan, with Zinedine Zidane’s men earning an important Champions League group B result at the San Siro. What were five talking points, as the Nerazzurri’s hopes of a last-16 UCL berth ended with a whimper?

Nicolo Barella, one of few bright sparks on MD3 in Madrid, upended an overlapping Nacho Fernandez inside the area. Hazard duly converted from twelve yards, with captain Sergio Ramos (hamstring) and Karim Benzema (knock) both sidelined with respective injuries.

Inter’s slow start only worsened. Arturo Vidal got booked, then sent off after persistent arguing with referee Anthony Taylor, as he felt he was fouled inside the box. A goal behind, they now had a numerical disadvantage too for an hour against a Real side who rarely relinquish leads.

Inter have a mountain to climb now… pic.twitter.com/ngz4NXlNds

The visitors created chances aplenty and despite a promising start to the second-half by Inter, their endeavours were suddenly diminished by Zidane’s double substitution.

Rodrygo made another memorable cameo from the bench, but his close-range strike – less than 60 seconds after being introduced – was ultimately ruled a Hakimi OG after a deflection.

Both sides had a few half-chances before full-time, but the game petered out as a contest with Real able to control play whenever they truly wished and Inter becoming increasingly frustrated.

The result means Los Blancos have a three-point gap on third-placed Shakhtar Donetsk before travelling to Kyiv next week.

Meanwhile this latest defeat means Europa League football is the best Inter can hope to settle with, for a third successive season.

Without further ado, here’s a look at five talking points from an eventful affair in Italy: 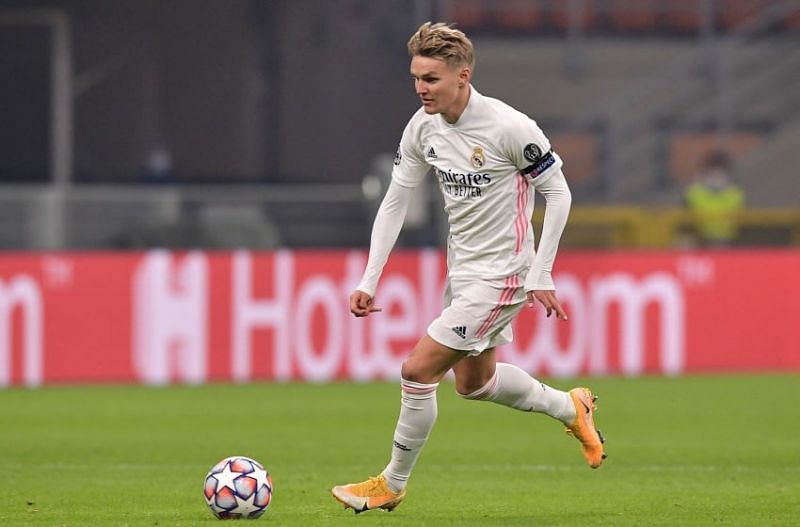 Odegaard delivered an eyecatching display to build upon, on his maiden Champions League outing

Although the magnitude of this fixture for both sides was not lost pre-match, it ended as the perfect platform for Martin Odegaard to build upon among Europe’s elite.

Supported by Eden Hazard to his left, Lucas Vazquez right and a fairly quiet Mariano Díaz ahead of him, the Norway international did his reputation no harm with an accomplished display.

He went down a touch easy under some challenges near referee Taylor, who felt he went down looking for free-kicks at times, but besides that, there wasn’t much negatively to highlight.

His selfless approach in the final third is understandable, but he needs to be more assertive and take on increased responsibility as the highest-positioned creator behind the lone man in attack.

It’s understandable, given he had experienced pass masters in Toni Kroos and Luka Modric in holding midfield, but you’d presume that facet of his game will come with more experience and minutes in Zidane’s 4-2-3-1 system. It’s easy to forget this was only his fourth start of the season.

He popped into multiple different positions, either recycling or progress forward in possession, while making intelligent runs and pinching the pocket of an unsuspecting Inter backline.

It was his intricate pass to Nacho that ultimately won Real’s early pen, while his tackle on Hakimi high up the pitch saw Vasquez hit the post seconds later. An encouraging hour in the bank. 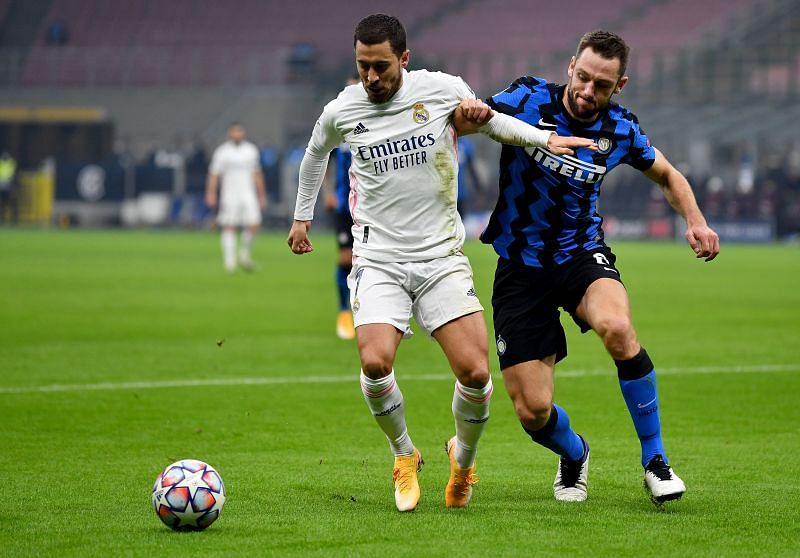 Hazard wasn’t back to his scintillating best, but didn’t need to be as he still contributed significantly

Samir Handanovic probably would’ve been unhappy not to get fingertips to Hazard’s early opener, but it’s remarkable to think the Belgian’s penalty was only his third goal for Real.

It’s been a tough 18 months since his £90m move (plus add-ons) from Chelsea, where he was heralded as the Blues‘ creator-in-chief and had ultimate freedom to roam forward at will.

He’s struggled with everything since: weight issues, troublesome injury problems, inconsistent form and a seeming crisis of confidence at times too, as things haven’t gone his way in Madrid.

The highs remain fleeting under Zidane so far, but this display – his best of 2020 – will have provided him with a morale boost ahead of a tough stretch of matches across all competitions.

You could tell he wasn’t at 100%, having missed the most recent international break after a positive coronavirus test.

He’s had muscle, ankle and multiple knocks this term already – we’re not even at Christmas yet.

It’s why the Real man didn’t have a bounce in his step, nor drive at defenders with the same conviction he usually does, but also proved that wasn’t necessary either.

He combined well with Vasquez and Odegaard while showing intelligent movement to roam across from left-to-right and vice versa, depending on which side Real were attacking.

No-one completed more than his six dribbles before being replaced for Vinicius Junior, though most of them came from exploiting open midfield spaces.

Milan Skriniar and Stefan de Vrij forced him into a cul-de-sac when he edged towards goal as time wore on. It didn’t matter though, as his job was essentially complete by this point. 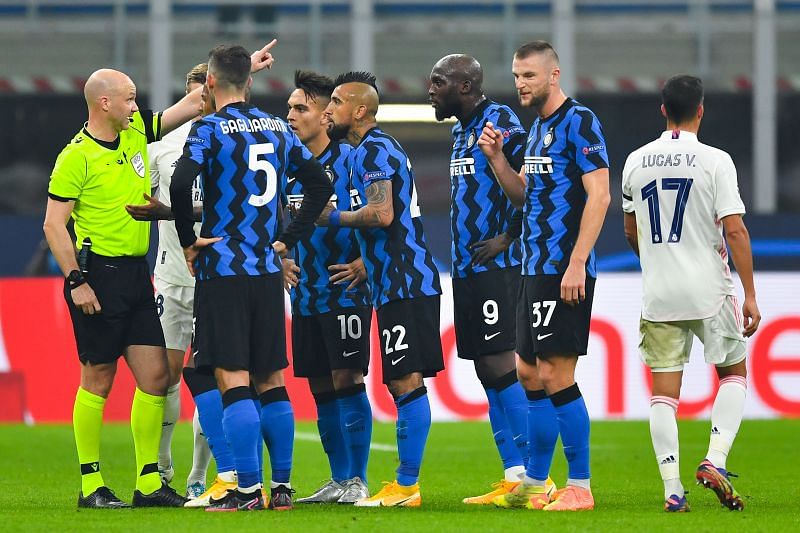 Vidal couldn’t believe Anthony Taylor’s decision, but really could have no complaints as Real profited

“Honestly, we aren’t a great team yet because we get ourselves into trouble like this. For the first hour we played badly and were in trouble, we didn’t have enough fight and desire.

Then we woke up and won, which is the most important thing.”

You could essentially the same here, though the quality of opposition was considerably higher and they got themselves into a position they couldn’t recover from.

It wasn’t for want of trying, either. Whether you agree he should’ve been sent off or not, Vidal’s conduct was simply indefensible and that’s the last thing you need from an experienced player.

He wasn’t playing particularly well anyway, but to get sent off the way he did, just accelerated his side’s struggles after a draining first half-hour where they lacked ideas and execution. Real didn’t need an invitation to take advantage and Inter were drowning under persistent pressure.

Lautaro Martinez was sacrificed at half-time, but only had 11 touches in 45 minutes. It was an off-night for Lukaku, starved of regular service and equally struggling against Fernandez-Varane as Conte’s tactical tweaks saw him play as a lone centre-forward after Vidal’s silly dismissal.

Their central midfield trio didn’t do enough to effectively protect their three-man defence, nor the wing-backs, who had a tough evening – especially Real academy graduate Hakimi.

They started the second 45 with more intensity and incision but the timing of Real’s second goal means it’s difficult to say how things might have unfolded differently, if Barella didn’t foul Nacho or Vidal kept his cool. Ultimately, we’ll never know but Inter made things difficult for themselves.

#2 Zidane’s tactics pay off, as do his substitutions 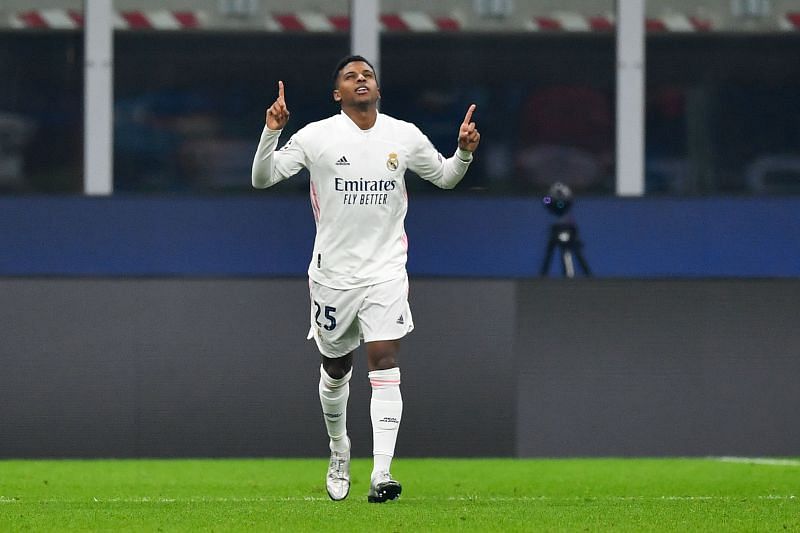 Rodrygo celebrates after making an instant impact off the bench, as Real applied the hammer blow

After insisting with a 4-3-3 formation in each of Real’s three previous Champions League group stage games and having limited success, Zidane needed to shuffle the pack and it worked here.

Conte’s adventurous 3-5-2 produces some beautiful football at times, but hasn’t translated to wins against tough opposition regularly enough. They were 2-0 down inside 35 minutes on MD3 and despite recovering to equalise, lost 3-2 after Rodrygo’s 80th-minute winner off the bench.

Again the Brazilian teenager played a pivotal role off the bench, so soon after being called upon by Zidane – who could sense ten-man Inter were starting to rally with increasing confidence.

They had a penalty appeal denied, Lucas Vazquez made a last-ditch defensive intervention before Thibaut Courtois was called into action as substitute Ivan Perisic lurked dangerously.

Although replays showed his sliced close-range effort took a deflection off the retreating Hakimi, Real had survived a period of sustained pressure to double their advantage.

Casemiro’s inclusion, on for Odegaard, provided more defensive solidity in midfield alongside the Kroos-Modric duo who impressed as they so often do.

He had more touches (55) and completed passes (49, 98% success) in 30-odd minutes than Odegaard in 60, without needing to do much defending either. The game was over.

#1 Antonio Conte and his players have it all to do 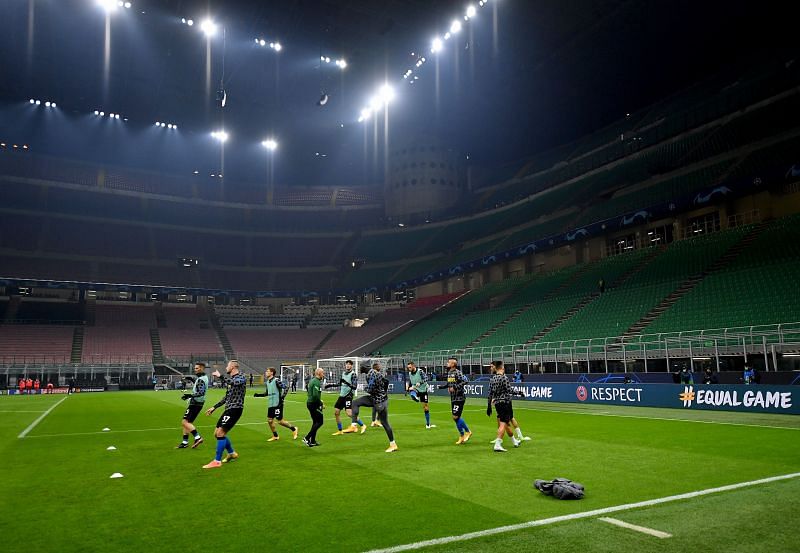 There’s plenty of work ahead for Inter, who have underwhelmed for a third successive UCL campaign

Inter’s four-match winless run came to an end – despite needing an inspired second-half response – but this latest display will leave plenty of questions at Conte’s door in Milan.

They face an away trip to second-placed Sassuolo on Saturday and cannot afford to drop points in their final two Champions League group games. For the third season running, they’ve flattered to deceive among Europe’s elite and it seems they’ll face a scrap with Shakthar for third-place.

It’s not where they expected to be just three months ago, after scoring first but ultimately losing 3-2 to Sevilla in last season’s Europa League Final. They finished second in Serie A – their highest finish since 2010-11 – just a point behind Juventus and were expected to start strong this term.

Instead, their rivals Milan have started brilliantly while they lag behind across all fronts. The next six weeks of the campaign will prove decisive as far as their high aspirations are concerned.

Lukaku’s comments were impactful because it’s true: despite spending more than £450m over the past four years, they’re no closer to bridging the gap than rivals who’ve invested more wisely.

Conte is a perfectionist who has won multiple honours elsewhere and will take perspective from this defeat, but how long before pressure intensifies at his door?