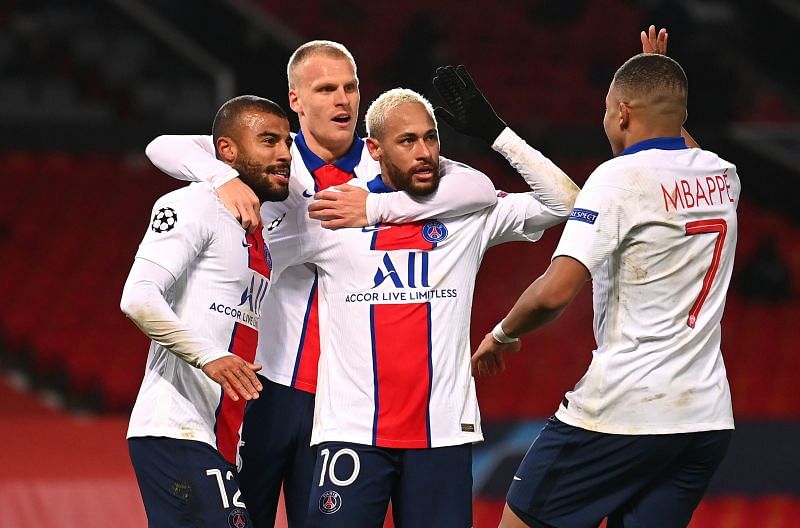 Goals from Marquinhos and a Neymar brace helped Paris Saint-Germain to an important 3-1 Champions League away win over Manchester United in their Group H encounter, keeping the group finely poised ahead of next week’s final matchday. What were five talking points from an intriguing affair at Old Trafford, where one side played the final 20 minutes with ten men?

Thomas Tuchel’s men started well and raced into an early lead after six minutes through Neymar, after Kylian Mbappe’s deflected strike spun towards the Brazilian.

He fired low across goal from a narrow angle beyond David de Gea and suddenly their hosts had a deficit to overturn.

Despite a sluggish opening half-hour, they did just that through fortuitous circumstances.

Seconds after Keylor Navas saved from Anthony Martial, he was helpless to stop Marcus Rashford’s effort flash past him at the near post – after it took a wicked deflection off Danilo Pereira’s outstretched leg.

United grew in confidence and were the better side as time wore on, with PSG players bemoaning questionable officiating decisions while feeling understandably aggrieved.

Fred was spared by referee Daniele Orsato after VAR review showed he headbutted Leandro Paredes in an off-the-ball incident, though the Italian deemed it a yellow card challenge.

Early in the second-half, Martial missed a big chance while former PSG man Edinson Cavani hit the crossbar with a chip as United’s attacks and intensity increased. The visitors were surviving.

A backpedalling Marquinhos hit the crossbar with a header inside the area, in a timely warning the hosts couldn’t rest on their laurels.

Five minutes later, the PSG captain was on hand to slot home from close-range after David de Gea’s save from substitute Mitchel Bakker forced a corner.

60 seconds later, Fred was sent off and couldn’t complain. His risky challenge on PSG substitute Ander Herrera was the Brazilian’s fourth in 70 minutes and United were down to ten men.

Paul Pogba came close off the bench with a venomous volley, Bruno Fernandes had a close-range header saved before PSG produced the killer blow in stoppage-time.

Neymar combined with Mbappe and substitute Rafinha Alcantara, who provided the reverse pass in the area to present his compatriot with a tap-in he was never missing.

3-1, PSG earned their revenge in style and Manchester United face a must-win clash away at RB Leipzig next week if they’re to qualify for the Champions League knockout stages. 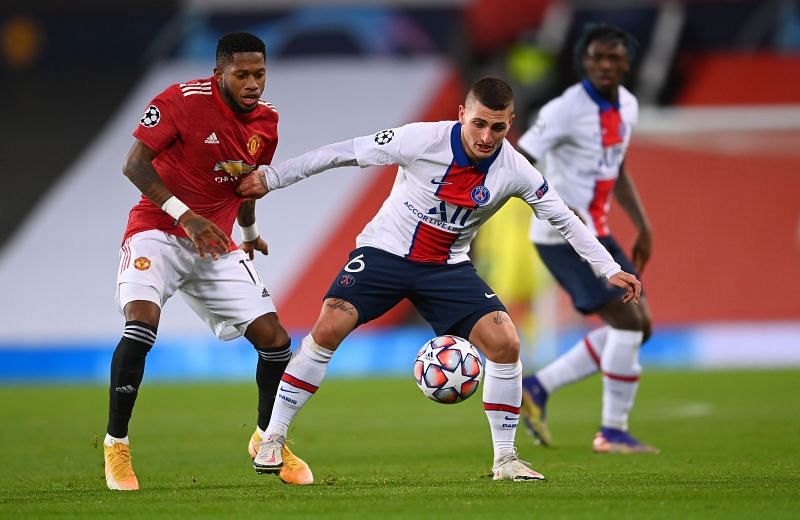 Within 30 seconds, you saw him after Fred’s forceful challenge saw Orsato blow his whistle for the first time. Given the Italian’s troublesome injuries in recent seasons, you could sense PSG’s coaching staff breathe a collective sigh of relief as he got up and dusted himself off soon after.

When fit, Verratti is their best midfielder and a reliable conductor with tenacity and defensive diligence that belies his 5ft 5in frame.

The problem? He hasn’t managed to stay available for a full campaign with multiple issues (adductor, ankle, calf, knee and more) limiting his progress.

After making a cameo in their 1-0 win over RB Leipzig on MD4, this was his first Champions League start since mid-February and proved a welcome return. As usual, he controlled the game’s tempo as the midfield metronome and produced the guile PSG often lack in his absence.

It was sometimes subtle, but you knew he was there and he always made himself open for a pass – no matter the situation – something Idrissa Gueye and Ander Herrera aren’t as comfortable, nor as good, at doing.

His presence provided Porto loanee Danilo Pereira with more conviction alongside him, while Leandro Paredes retained possession perfectly (41 passes, 100% success) in 65 minutes too.

He made a cynical but necessary foul on Martial as United looked to break in numbers early in the second-half after Marquinhos was elbowed in an aerial challenge. It was typical of his character, willing to take one for the team, during a second-half that felt on a knife-edge.

No PSG player made more tackles (4), he won 11 of 18 duels and despite being outmuscled at times, acted as the dependable bridge between defence and attack the visitors have longed for.

#4 How did Edinson Cavani fare against his former club? 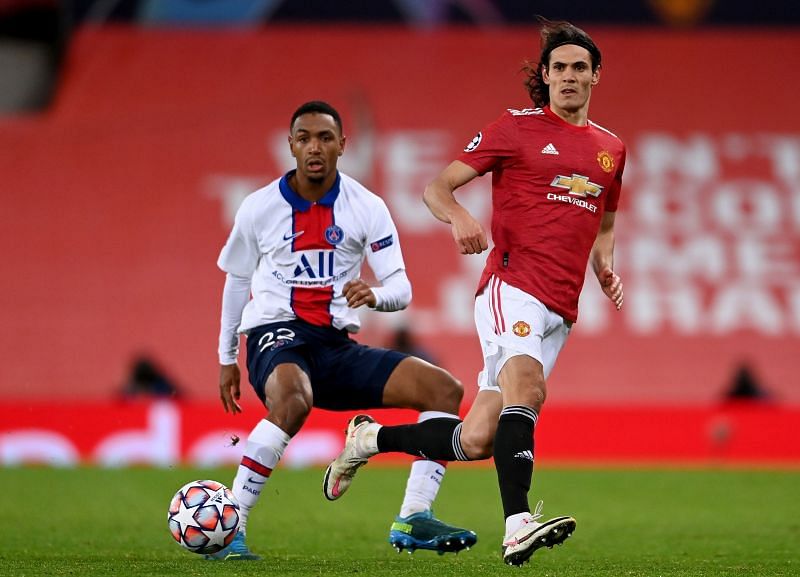 Cavani largely fed off scraps vs. former teammates, but acquitted himself well and hit the woodwork

Across both teams, only PSG’s Moise Kean had less touches (17) than Edinson Cavani’s 33 in a frustrating match that promised plenty but didn’t finish the way the Uruguayan hoped for.

After a matchwinning contribution off the bench against Southampton, the 33-year-old was always going to start here.

Seven successful years and 301 appearances across all competitions followed his £58m move from Napoli, but Cavani was released by PSG in August.

He was a deadline day acquisition in the red half of Manchester, largely with the short-term in mind, but was determined to make his former employers pay the way others have recently.

He didn’t need touches to be an ever-present threat without the ball, pressing players out of possession and making multiple attacking runs into the box, ghosting past Marquinhos and co.

Dovetailing well with Rashford and Anthony Martial, he’ll wish he was on the end of the former’s low ball across the box – rather than exchanging passes in a well-worked move before it.

Martial blazed wide from close-range, Cavani rattled the crossbar with a brilliant chip over Keylor Navas minutes later and United were eventually made to rue their missed opportunities.

Given the circumstances, Cavani did fairly well and will be hoping to feature more regularly. It’s easy to forget that this was only his second start – both in the Champions League – and the experienced forward needs a run of regular minutes under his belt to truly progress.

#3 Fred walked a very thin tightrope, until it finally snapped 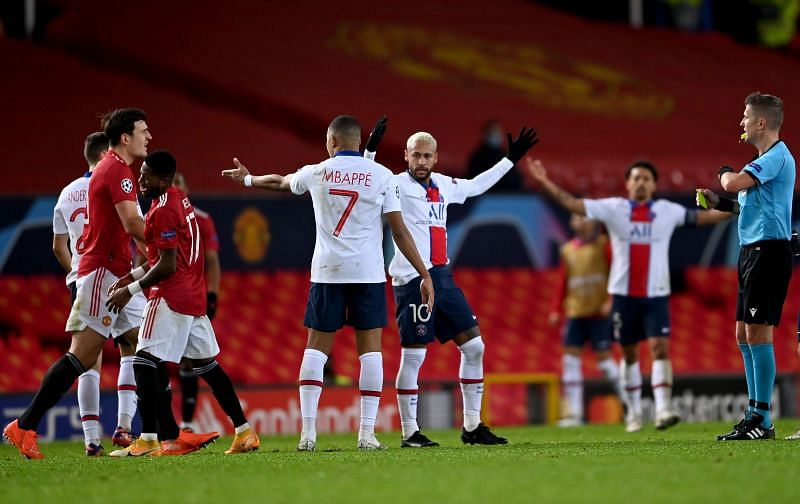 Fred could have no complaints when eventually shown a second yellow, so soon after PSG made it 2-1

Two-and-a-half years after his £53m move from Shakthar Donetsk, Fred remains a divisive figure at Manchester United. Why?

Matches like these amplify the Brazilian’s weaknesses and when you have a stacked bench packed with multiple midfield options, it’s hard not to want someone else.

As mentioned in the previous point, Fred was in Orsato’s mind less than a minute into the match with a forceful sliding foul on Verratti. He made another two in the first-half, both of which went unpunished, but should’ve been given his marching orders after headbutting Paredes.

Somehow, he got away with it. Paredes himself was actually booked for a 50-50 challenge on Fred, even though replays showed it was the other way around – overextending his leg in the duel and rolling on the Argentine’s ankle.

Solskjaer didn’t replace him after half-time and that faith ultimately proved naive, as he was penalised for a sliding challenge on former United man Ander Herrrera. You couldn’t make it up.

Although you could debate whether that was truly a yellow card tackle, Fred was already on a booking and committed to yet another challenge he really didn’t need to make. He trudged off towards the touchline, looked bemused and while players argued, it was futile. 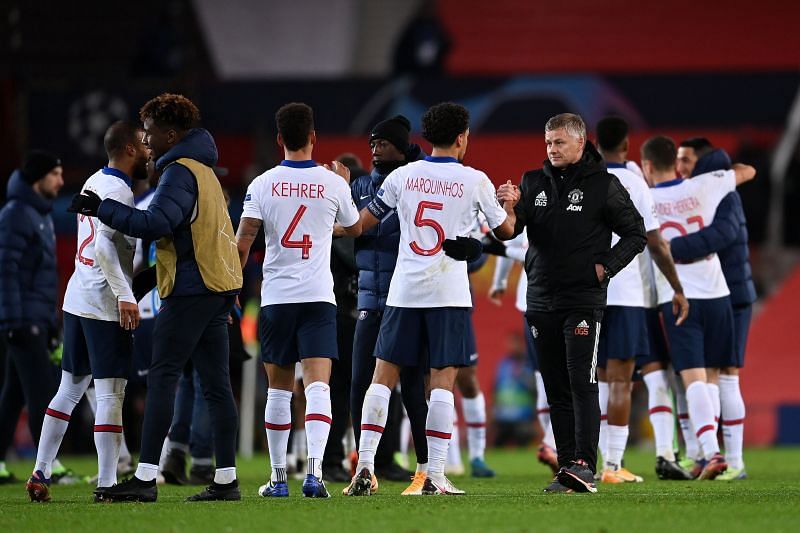 Ole Gunnar Solskjaer was rightly lauded for his defensive-centric, counter-attacking tactics as United defiantly stifled PSG on MD1 in Paris. That was October 20 and seems a long time ago.

This latest defeat means they’ve earned six points in four Group H games since, meaning next week will be a nervy watch in Germany while their Premier League rivals have already qualified.

Having last year’s Champions League finalists and semi-finalists in your group is a sure-fire way to test whether you’re good enough for a deep run – one United haven’t truly had for a decade.

Questions continue to bubble under the surface about whether Solskjaer’s the right man for the job long-term and in truth, performances like these don’t help his cause.

He’s been retired 13 years and he still would’ve scored Martial’s chance, the woodwork stopped them from taking a second-half lead and they played the final 25 minutes with ten men.

I hear all of that, really. But at the same time, he was overshadowed by a proactive Thomas Tuchel a few yards across from him as PSG survived the hosts’ pressure and hit them for six.

With five substitutes at his disposal, why did Fred start the second-half? Martial and Bruno Fernandes were both poor, yet it took them going down to ten men before he changed anything.

Jose Mourinho hooked Erik Lamela at Old Trafford in early October at half-time after he deceived referee Anthony Taylor into sending Anthony Martial off during a similar off-the-ball incident.

Why did it not dawn on him to do the same? Fred was doing himself no favours and with the wealth of options to choose from, his misplaced faith backfired in a way we all saw coming.

"Maybe I should have taken Fred off, but he's been playing really well."

"The second one isn't a yellow card, Ander Herrera knows that as well. Ander knows."

Ole Gunnar Solskjaer gives his view on the major talking point as Man Utd fall at home to PSG. 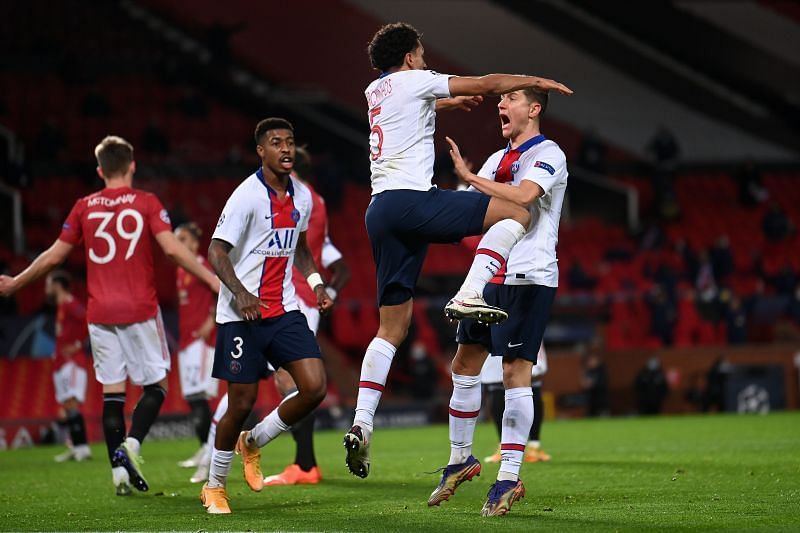 Marquinhos celebrates his timely goal, unmarked and sharpest to beat de Gea and help PSG ahead

Make no mistake about it, PSG were hanging on at times in the second-half. The players knew, Tuchel was aware too and made a double substitution after 65 minutes.

It wasn’t as simplistic as that, of course, but he was balancing risk with reward in a way we rarely see from the German in big matches like this.

He didn’t need telling just how important this game was, as far as their Champions League aspirations are concerned. One commentator suggested this result kept him in a job and while that felt a little reactionary, it wasn’t exactly far-fetched.

They host already-eliminated Basaksehir next week and barring a dramatic collapse, have essentially earned their knockout berth.

Herrera is a defence-first midfielder and would’ve been motivated to face his former side in the city that was home for five years until last summer. Both he and Mitchel Bakker made their presence felt, albeit in different ways, replacing Paredes and a fairly quiet Kean.

2-1 up with a numerical advantage, Herrera provided fresh impetus in place of a creative-minded Paredes, while Bakker almost scored himself seconds before Marquinhos’ close-range finish.

Rafinha – another sub – played the decisive pass for Neymar to seal all three points in stoppage-time, while Thilo Kehrer was an additional defensive body as United went out to equalise.

This was their biggest match of the new campaign to date and amid premature rumblings of a genuine Ligue 1 title race this term, they delivered against tough opposition away from home.

If only they could’ve done the same in Germany…