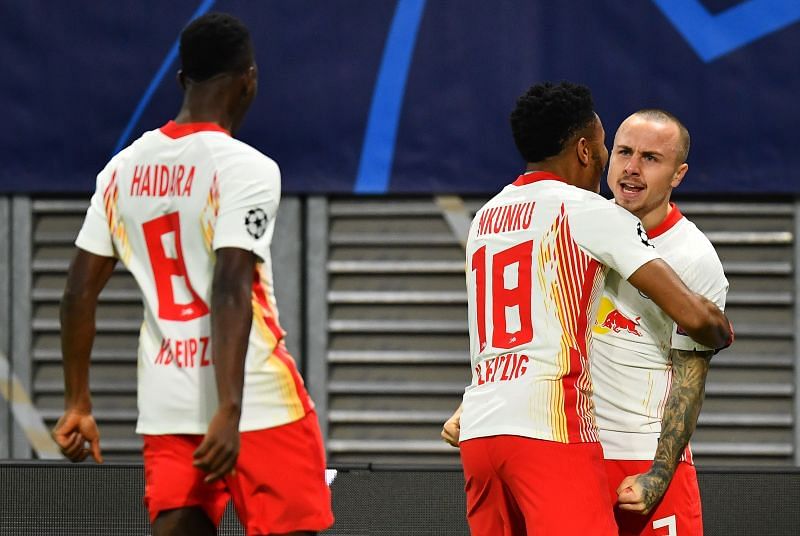 Manchester City loanee Angelino had a goal and was involved in two more to help sink a slow-starting Manchester United, as Julian Nagelsmann’s RB Leipzig held firm despite an unlikely late comeback, winning 3-2 and knocking Ole Gunnar Solskjaer’s men out of the Champions League to finish an eventful MD6. What were five talking points from a thriller in Germany?

Amadou Haidara doubled the hosts’ lead with a fine first-time finish ten minutes later, before Willi Orban had a rebounded header correctly ruled out for offside after VAR review.

United were being swarmed in the opening exchanges and suddenly found themselves two goals behind, though it could’ve been three or four by half-time.

Emil Forsberg missed a golden opportunity, while Luke Shaw made an important interception after a costly Aaron Wan-Bissaka mistake in their own half almost set Leipzig through again.

Donny van de Beek’s introduction at the interval injected some energy and midfield runners, though both sides made two alterations before a whirlwind 60 seconds with 20 minutes left.

Bruno Fernandes rattled the crossbar from a free-kick which substitute Brandon Williams won on the edge of the area, before Leipzig’s Justin Kluivert made it 3-0 59 seconds later.

He came on and instantly made himself a nuisance in the final third, before pouncing with a deft chip beyond David de Gea after more lackadaisical defending all-round by United defending Angelino’s low cross.

Fernandes eventually got his goal, albeit from twelve yards after Mason Greenwood won a soft spot-kick after tangling with Ibrahima Konate.

Two minutes later, Paul Pogba – another United sub – leapt highest to head home during a goalmouth scramble and suddenly the visitors had a chance again after VAR review.

Mason Greenwood, Marcus Rashford and Pogba all had chances to score a late equaliser, but it wasn’t to be. Regardless of what happens in tomorrow’s rearranged PSG-Basaksehir clash, last season’s semi-finalists RB Leipzig will return to the UCL knockout stages in 2021.

So, here’s a look at five talking points after a truly dramatic finish in Germany: 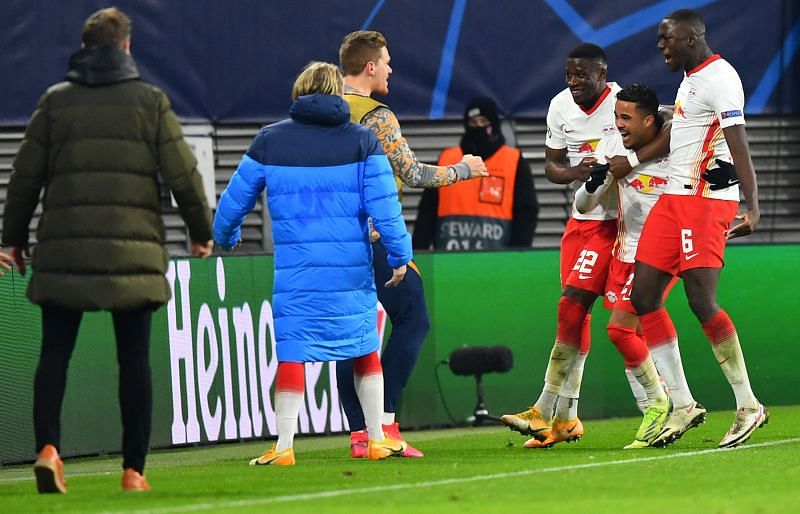 Justin Kluivert’s only UCL goal prior to this match was for parent club Roma during the 2018-19 campaign, on MD2 against Viktoria Plzen in a 5-0 thrashing. It’s fair to say the Netherlands international – still eligible and playing at under-21 level – hasn’t truly kicked on since.

Inconsistency, questions over whether he fits into Roma’s system and injuries have all hampered his development at times too. He needs a run of extended minutes, something Leipzig were happy to offer him in a competitive side, hence the season-long loan deal struck in October.

After a fairly muted start with limited starts, he’s now scored twice in two games – a similar sharp finish beyond Manuel Neuer during their frenetic 3-3 draw away at Bayern on Saturday night.

Dani Olmo did okay in the false nine role, but Nagelsmann needed fresh impetus and certainly got that from Kluivert.

He was booked for an overzealous challenge on Fernandes but his direct running, skilful repetoire and tricky nature got both Harry Maguire and Williams carded shortly afterwards.

Those quick reactions proved decisive in the United box from Angelino’s low deflected cross, as he deftly chipped the ball over a sheepish de Gea to make it 3-0. His off-the-ball pressing was easy to spot, harrying players out of possession and forcing them into quicker decision-making.

That goal was the first thing Maguire wanted to discuss post-match and although they rallied with quick-fire goals late on, you could sense the game was over after Kluivert’s hammer blow.

From a neutral perspective, it’ll be interesting to see whether the winger builds on this display.

He certainly adds another dimension to Leipzig’s attack, but the next question is whether he can do so on a more regular basis. 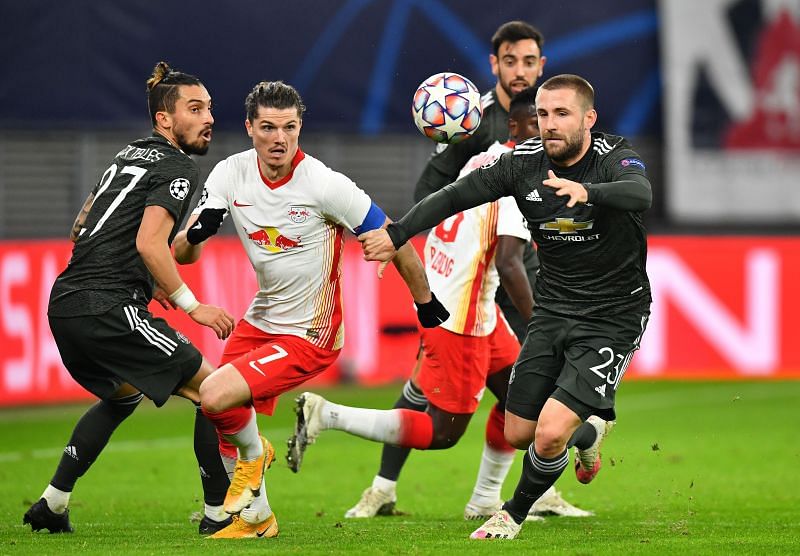 United may have been 2-0 down early, but still had chances to go into the break with the deficit halved – at the very least. They didn’t, namely because they seemed too busy complaining about questionable officiating decisions and playing for handballs in the Leipzig box.

Alex Telles was deployed in a left-midfield position but didn’t find any joy with his deliveries, which is being generous to the Brazilian – a fullback by trade.

With 35 touches, he completed just six passes and had the lowest pass accuracy across both teams (42.9%), losing possession a whopping 15 times in 45 minutes. He made six crosses – only one was accurate – no wonder he was replaced, though shouldn’t have started to begin with.

Fernandes’ deliveries, bar one in the second-half, weren’t much better either. The same could be said for most United players who fizzed in corners or free-kicks, which were frequently headed clear as Leipzig defenders relished aerial duels – even with Dayot Upamecano out suspended.

Shaw couldn’t commit too far forward otherwise he’d be caught up the other end as the left-sided centre-back in Solskjaer’s three-man backline.

The visitors made it too easy for them to get settled, which is why a change of shape and personnel was key to unlocking a new dimension for United going forward in the second-half. 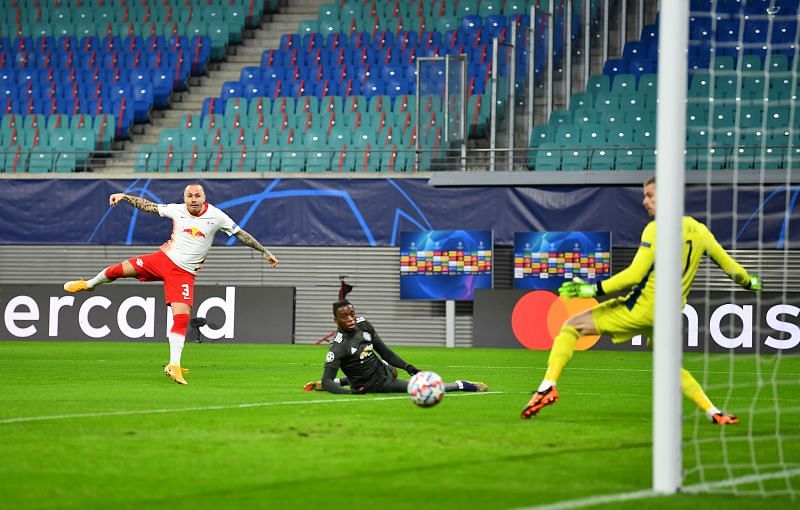 Kluivert was the matchwinner, but Angelino was Leipzig’s game changer. If only United had a reliable attacking outlet frequently providing width like him, the complexion of this article would be completely different.

Funnily enough, he had the lowest pass accuracy (60%) of all starters bar the aforementioned Telles but that was largely down to two factors: his ability to mix risk with reward and struggling to find an out ball when United swarmed their hosts early in the second-half in search of a goal.

That changed somewhat when Yussuf Poulsen was introduced, though he only had 15 touches in 34 minutes as United dominated possession for large periods and added fresh legs, rather than being a target man for Leipzig to hoof towards.

Angelino wasn’t perfect by any means: shanking clearances, losing duels or seeming frankly baffled in a one-man free-kick wall outside the area, but the 23-year-old fullback continues developing and quietly building confidence with regular minutes under Julian Nagelsmann in Germany – something Manchester City couldn’t guarantee him. Remind you of anyone?

He’s looked increasingly settled in that fullback role and although it’s usually Nordi Mukiele directly opposite him bombing down the right-hand side, Haidara did a serviceable job. They linked up for the second goal after Angelino fired home his seventh goal of 2020-21 already.

We’re not even at Christmas yet – he’s already surpassed his goal tally for the last three seasons.

“I really don’t know for sure, but a few more games need to be played – if everything goes normally, it [the obligation clause] will happen. In any case, I hope that I’ll be on the pitch for RB Leipzig for a long time to come.”

– Angelino on his future last month

That €20m (£18m) future fee is looking increasingly like a bargain by the week, one that both Manchester City and Barcelona could live to regret long-term.

#2 Julian Nagelsmann gets his tactics spot on 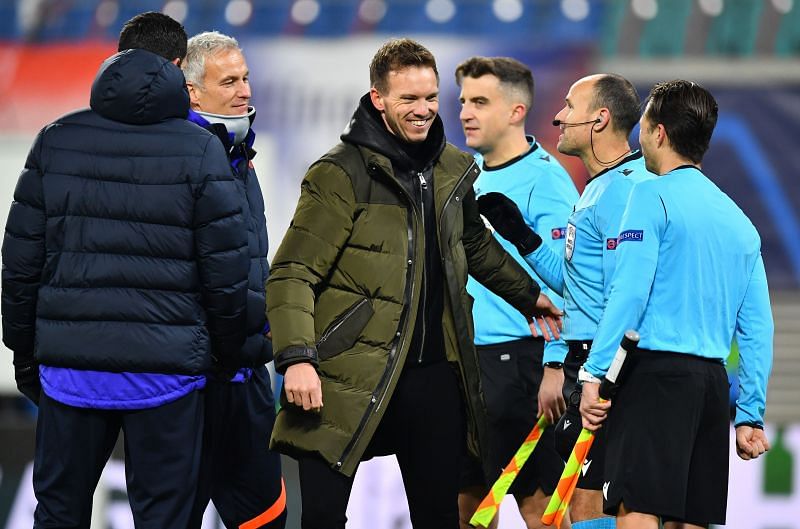 Nagelsmann took responsibility for United’s bloated but nonetheless emphatic 5-0 thrashing on MD2 – having conceded four goals in the last 16 minutes plus stoppage-time in October.

They were overwhelmed on the counter-attack, having deployed a 3-1-4-2 formation that saw Kevin Kampl overrun in midfield while Olmo and Christopher Nkunku were essentially non-factors for large periods too, despite their creative tendencies.

Well, the tables turned this time and United clearly didn’t do their due diligence. Leipzig had just conceded six goals in two completely different matches against Basaksehir and Bayern.

They were almost punished for their profligacy (20 shots, hit woodwork twice) on MD5 but Bayern’s quality shone through to claw back a point three days later last week.

What this should’ve told United was that, at the very least, Leipzig were defensively vulnerable at times – not least with Angelino and Mukiele flying forward – so defend tightly for the opening stanza and patiently break them down. That gameplan had evaporated after 110 seconds.

Although he’s been inconsistent this term, I was worried about Upamecano’s absence through a yellow card suspension here. Haidara played ahead of Mukiele in central midfield at Bayern but slotted into an unfamiliar role at right wing-back well, considering the circumstances.

Mukiele often came out second best in duels with Mason Greenwood, Konate was inevitably punished for being overzealous and Orban – the least mobile and weakest link – performed best at the back, though none of the trio covered themselves in glory.

For all of Fernandes’ touches (94), he and his United teammates didn’t do enough to get Rashford on the ball regularly. They were overrun in midfield by Olmo’s false nine role and by the time Solskjaer could change their system, it was already too late to have the desired effect.

Pressed off-the-ball and harried into mistakes early on, Leipzig set up the foundations for a memorable victory brilliantly. So much so that despite a late wobble, Nagelsmann will be happy. 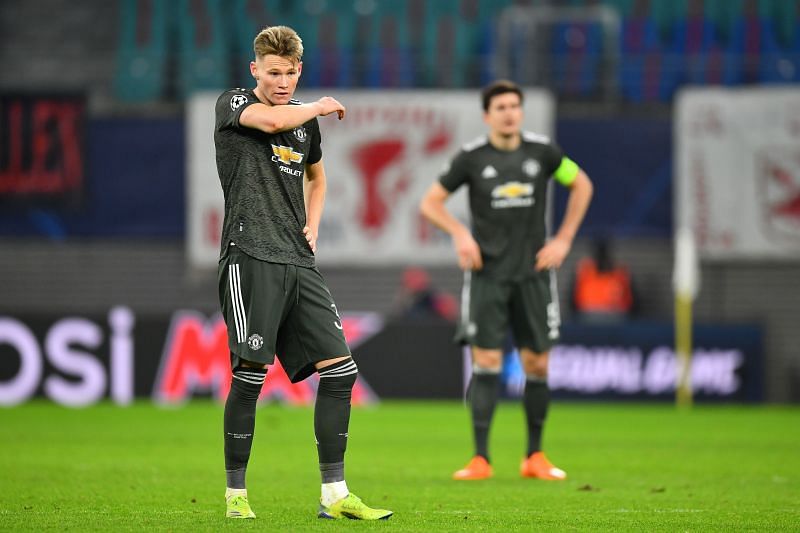 There will be a deep dive into United’s latest demise, rightly so after such a promising start to a tough group, but earning the much-anticipated knockout beth would’ve earned them £8.5m.

Winning the Europa League altogether – something they couldn’t do in August – is worth £7.7m, so already you can see significant discrepancies between Europe’s two club competitions.

Maguire and Solskjaer both discussed their slow start, something they’ve managed to get away with on numerous occasions already this season (Brighton, Newcastle, Everton, Southampton and most recently away to West Ham over the weekend). RB Leipzig are better than all of them.

They only have themselves to blame for seemingly failing to do their homework ahead of a must-win game – even if they only needed a point – and were exposed by Nagelsmann’s men, who executed their gameplan brilliantly.

“As a player, we have to be aggressive – win first and second balls, it’s the basics of football but if you can’t defend crosses, you’re going to lose.” – Maguire during his post-match interview

Up next, they host noisy neighbours Manchester City on Saturday evening.

Pep Guardiola’s men continue their seemingly never-ending pursuit of Champions League glory and qualified for the knockout stages with two games to spare. Sure, they had an easier group.

The point remains and it’s unsurprising United were humbled here after a naive start to the campaign had been overshadowed by their luck.

Disjointed, exposed away from home again and an inquest awaits as they hope to respond accordingly with multiple players rightly in the firing line.