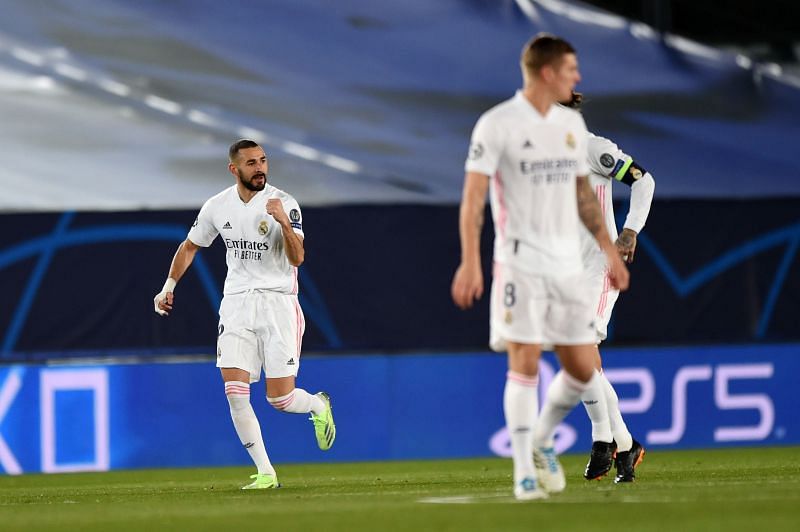 Bundesliga side Borussia Monchengladbach were 90 minutes away from ending Real Madrid’s record of qualifying for the Champions League knockout stages – 25 years and counting – after Karim Benzema’s first-half brace sunk Marco Rose’s men on MD6, confirming they progress as Group B winners. Which players excelled while others wilted under the pressure here?

La Liga champions Real started intently and ultimately proved too much for their visitors here.

Nonetheless, Gladbach have also punched their ticket into the last-16 as Group B runners-up, after Antonio Conte’s Inter and Shakthar Donetsk played out a frustrating goalless draw in Milan.

Alassane Plea has seven goals and six assists this term, but lacked the composure to level the scoring under pressure from a retreating Sergio Ramos and the onrushing Thibaut Courtois.

His effort trickled wide of the far post and that miss proved decisive, as Real could’ve made it 4-0 by half-time. Benzema doubled his tally with a similar finish just after the half-hour mark. this time after Rodrygo fired across goal, powering another header beyond a helpless Yann Sommer.

Sommer made five saves, including one to push Luka Modric’s goalbound effort onto the far post as his Gladbach teammates wilted under Real’s sustained periods of creative pressure.

He could do nothing to stop the Croatia international firing into the far corner four minutes later after combining with Benzema, though the emphatic strike was correctly disallowed for offside.

It was 2-0 at half-time and that’s how it finished, though Real pushed for more goals despite sloppy play at times in possession and defensively, giving Gladbach hope of an unlikely comeback.

Plea missed another big chance but thankfully for the Frenchman, had strayed offside beforehand – while Sommer made big saves to thwart Toni Kroos and Ramos.

The woodwork saved the visitors from a heavy defeat, as Benzema and Vazquez weere both denied second-half goals too.

Gladbach started sluggishly but will be grateful that their off-night doesn’t see them drop into the Europa League in 2021.

After losing vs. Real Madrid, Gladbach needed Shakhtar Donetsk to draw with Inter Milan to secure their place in the #UCL knock-out stages.

Without further ado, here’s a look at five hits and flops from an eventful night in Madrid: 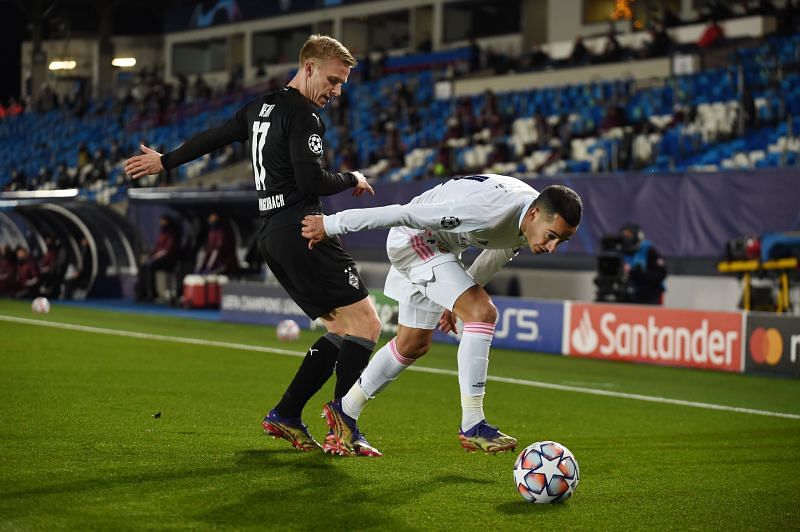 No Gladbach player started particularly well, but Oscar Wendt was quickly identified – fairly or otherwise – as the visitors’ weak link after looking rather unconvincing in duels against Rodrygo and Vinicius Júnior whenever the Brazilian wingers switched wings.

He turned 35 in late October and looked every bit his age as far as decision-making was concerned: being reactive, rather than adopting a proactive approach to defending the flanks.

It was probably typified by his role in Benzema’s first goal – seeming caught in two minds before sticking out a limp leg to try and throw Vazquez off course as he looked up and fired into the box.

Rather than press him into a mistake, or attempt a tackle, he let the winger-turned-fullback pick his spot and moments later, they were wheeling away to celebrate an easy opener.

Only Marcus Thuram recorded a worse pass success percentage (62.5%) than the Sweden international, who was wayward in possession (11 completed, 68.8% success) and most of Real’s attacks came down his side of the pitch. You could argue he didn’t get adequate support from a retreating Thuram off-the-ball, but the forward had more defensive contributions (5) than him.

He didn’t do enough to earn Real’s respect and was duly punished before being unsurprisingly replaced at half-time for a more mobile, younger alternative in Valentino Lazaro. 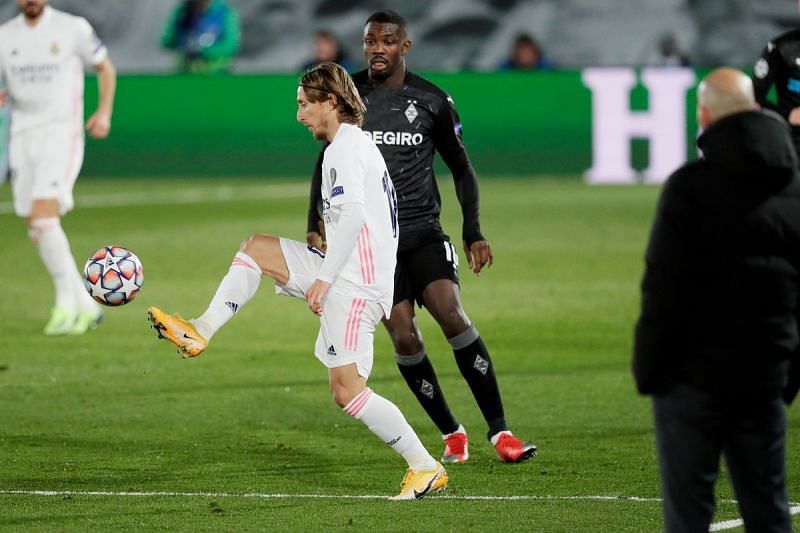 Alongside Casemiro and Toni Kroos as Real’s midfield trio, Modric was predictably classy as usual without the eyecatching statistics to necessarily justify his place over the latter in this list.

Kroos made five key passes, 15/16 accurate long balls and no starter had more than his 96.8% pass success (90 completed, 108 touches). Besides Florian Neuhaus, Gladbach’s midfield was fairly underwhelming throughout so none of the trident had to do much defensive work.

Modric was given a free-roam role to orchestrate through midfield in ways neither Casemiro nor Kroos rarely try, because they can’t hold a candle to him in that vein.

The use of his low centre of gravity, spatial awareness and ability to take players on – even at 35 – was critical in the build-up to multiple promising Real attacks here.

The fact he’s been doing it so long though, is why many critics have become desensitized to just how difficult a skill it is, like Kroos effortlessly spraying key passes under pressure for example.

Watch the build-up to their second goal again, how he calmly eliminates a charging Wendt from the equation with a subtle two-touch manoevure then feeds Rodrygo.

He had a brilliant first-half finish chalked off for offside, just minutes after forcing Sommer into an important fingertip stop to keep the visitors alive during a match they were just second best in.

No player completed more successful dribbles (4) and on another night, he’d have walked off the Alfredo di Stefano turf with a well-taken brace to his name. 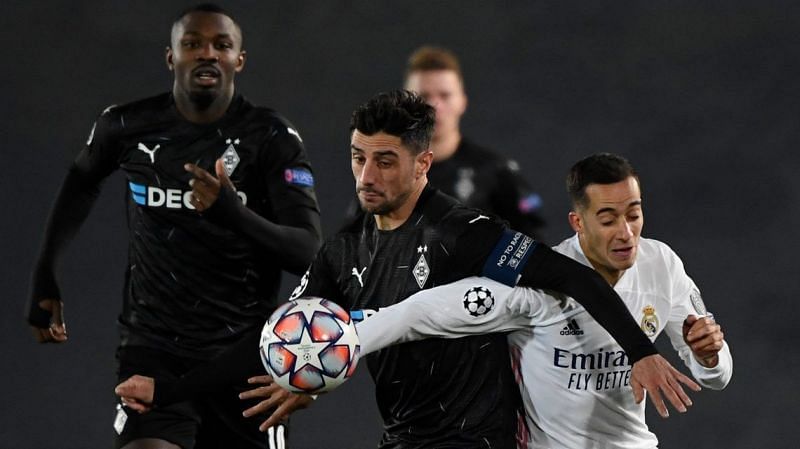 I could’ve picked Stefan Lainer after some baffling defensive positioning for both goals, or Plea after a rough night in the final third. Instead, I chose Gladbach captain Lars Stindl here – who for large periods, I didn’t notice was actually playing.

He had two key passes in a game of seemingly few chances for the visitors, though Real took their foot off the pedal and were giving away free-kicks, relinquishing possession cheaply for sustained periods to start the second-half.

Although things didn’t go his way, Thuram was trying and Plea did too, but Kramer played too safe while Stindl was rather effective on both sides of the pitch. Defensively, he made one tackle and interception with just 1/9 ground duels won – and was dribbled past on three occasions.

He lost possession 11 times and squandered chances to create an opening for Gladbach at a time where they could’ve taken advantage of Real’s subtle but visible defensive drop-off.

It was perhaps typified by his free-kick delivery after Ferland Mendy’s needless foul.

There were multiple players piling into the box but he wasted the chance, firing waywardly straight into Courtois’ grateful gloves.

Then minutes later, he tried a deft backheel but overcooked the pass – moaning at Thuram and Plea for not running, even though he’d made the mistake. Disappointing is an understatement. 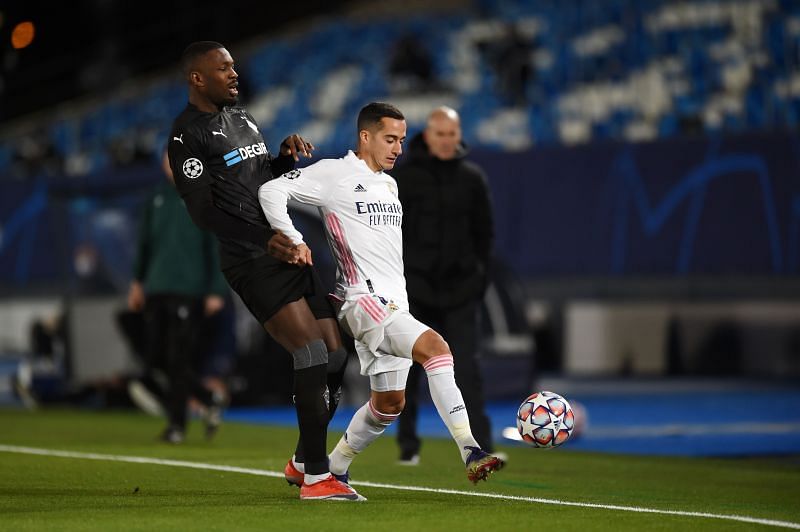 Vazquez didn’t shy away from his defensive duties, despite an impressive creative showing

Pictures often illustrate all that needs to be said. In Lucas Vazquez’s case, that’s certainly true: he was defensively aware and didn’t back down on the infrequent occasions he needed to respond.

Thwarting Thuram and Plea as they lurked dangerously from time-to-time is easier said than done, considering the pair are both among the Bundeslga’s top forwards.

He made three defensive interventions, committed four fouls – without punishment like Stindl – and proved he wasn’t to be bullied off-the-ball, even from an uncomfortable role at right-back.

Daniel Carvajal was named in the matchday squad but missed their last three matches (all comps) with a muscle injury, though Zidane interestingly didn’t choose him nor Alvaro Odriozola to start here – testament to the winger’s determination to stay and fight for his place this season.

It’s easy to forget that he was again linked with a Premier League move over the summer months, though the 29-year-old was a constant creative threat (five key passes) and picked the right time for his best individual display of 2020.

He delivered a pinpoint cross for Benzema’s first goal, while Sommer made an important fingertip save to deny him a second assist before half-time as Modric hit the post.

Crucially, Vazquez grew as the game wore on and with a bit more fortune, would’ve had more goal contributions to his name. He hit the woodwork after combining well alongside Benzema in transition, with a beautiful dummy leaving Nico Elvedi scrambling to recover.

Both he and Sommer could only watch as the ball cannoned back off the upright, on an evening where the winger certainly boosted his stock in Zidane’s eyes on both ends of the pitch. 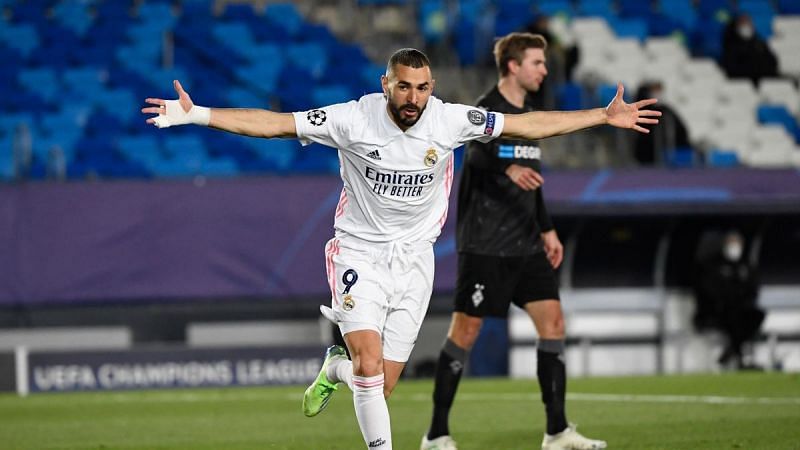 It was a landmark appearance for Benzema here, who ultimately proved Real’s matchwinner in a game they simply couldn’t afford to slip up in. As they did on Sunday at Sevilla though, Los Blancos earned a much-needed victory and had Karim to thank for that.

Given his perfectionist nature as a top centre-forward, he’d have been left ruing his misses rather than celebrating a well-taken brace. He could’ve had a first-half hat-trick, but saw his deflected header flash wide of Sommer’s far post.

He took both goals – almost identical headers – well from close-range and pressed intently out of possession as Real looked to kill off the game as a contest early in the second-half.

It didn’t come, Gladbach grew in confidence but failed to make the game exciting from a neutral perspective, though they largely had the woodwork and Sommer to thank for it only being 2-0.

He showed a willingness to drop deeper and help progress play from midfield, linking up well in the build-up phase with the Vazquez-Rodrygo pairing down the right-hand side.

On another day, he’d have earned two or three assists for his endeavour – watching Vazquez hit the post and Rodrygo’s effort flash narrowly wide.

The Frenchman also recorded five key passes and almost had his first hat-trick of the year late on, but failed to get enough power on a header at the far post as Sommer smothered the effort.

This was Zidane’s 150th win as Real head coach, a statistic he’ll be happy with – though contributions like Benzema’s are invaluable.

He turns 33 next weekend and is showing no signs of slowing down as Real’s focal point in attack – now the joint-top non-Spanish appearance maker alongside Roberto Carlos, a record he’s poised to break at home to Atletico this Saturday.

He’s now on 69 Champions League goals and as far as statistics are concerned, Benzema is finally starting to get his dues as Real’s evergreen talisman.