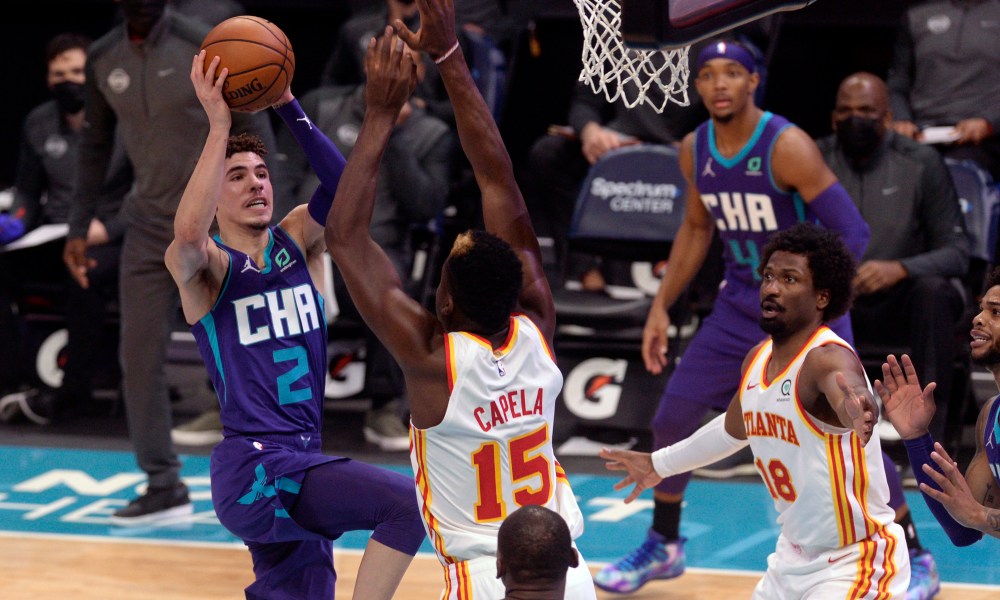 Charlotte Hornets’ 2020 draft pick LaMelo Ball (#3) officially replaced Markelle Fultz as the NBA’s youngest ever player to record a triple-double – 10 points, assists and rebounds – during their 113-105 win vs. the Atlanta Hawks on Saturday night but his nonchalant response to questions post-game show this is just the start for a young guard with plenty to achieve in the league.

There will be ups, downs and nights in between but LaMelo Ball’s first ten NBA games certainly haven’t been a disappointment for the no.3 draft pick – nor his new teammates in Charlotte.

65% of their current roster is 23 or younger, including multiple players who settled quickly and impressed: Miles Bridges, 2019 draft pick PJ Washington and Devonte’ Graham to name a few.

LaMelo, who went scoreless in their season-opener, has duly responded. Through ten games, he’s third for points (12.8), second for assists (5.9) and second for rebounds (6.3) across the team.

comments from the game itself

He had 22 points on 9-of-13 shooting, 12 rebounds and 11 assists to help Charlotte outlast Atlanta for their third successive win. Head coach James Borrego was effusive in his praise.

As for the player himself?

“I live my life and know what I’m capable of, so stuff like doesn’t move me like that. I know that’s supposed to happen.” 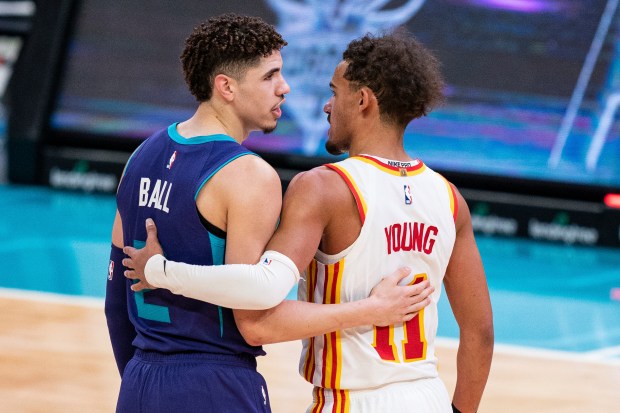 LaMelo shares some parallels with Young, who became an All-Star in his second season with Atlanta

“He’s a tall PG who can pass, rebound and is a smart player. Things are going to become even easier for him in this league as he plays more games.”

Statistic: Ball is only the fifth rookie in NBA history to record a triple-double and the Hornets’ first to do so off the bench.

“It’s tough because you don’t know when it’s coming. He might throw it behind his head, behind his back or straight to you. You have to be active, aware when he has the ball – it’s always fun playing with a guy like that.”

Perspective out in a sneakily tough Eastern Conference

After narrowly missing out on the achievement against New Orleans, he produced a more efficient showing as they beat Atlanta – who are among the teams proving this season’s Eastern Conference isn’t the cake walk many have prematurely deemed it.

Washington (2-8) remain an unknown quantity with the Bradley Beal – Russell Westbrook star pairing, while Toronto (2-7) and Brooklyn (5-6) have started slowly. Contrastingly, the New York Knicks and Cleveland Cavaliers (both 5-5) have taken critics by surprise. How long will that last?

Chicago are improving under Billy Donovan, while multiple storylines will emerge from what promises to be an intriguing regular season campaign – even with a shortened 72-game year.

My point here is simple: LaMelo will be given the licence to make mistakes but also gradually begin thriving alongside a mixture of youthful exuberance and experienced players with a point to prove. That’s important, considering he’s in a small-market with tempered expectations.

There’s no rush to thrust him into the starting five, despite Graham’s early shooting struggles. No need to fix what’s not broken, after all.

The pair he trails in the PPG standings? Gordon Hayward (21.4) and Terry Rozier (20.3), who are owed $94m over the next two seasons alone. The former’s max four-year deal covers a lot of that, but many critics feel they – previously teammates in Boston – are overpaid and could age poorly.

It’s still early days and as we’ve already seen with the COVID-19 protocols, as well as injuries, things could unravel quickly.

Up next is a home clash with a sneakily impressive New York team tonight.

There’s plenty of rookies to keep an eye on: Tyrese Haliburton (Sacramento Kings), Peyton Pritchard (Boston Celtics), Tyrese Maxey (Philadelphia 76ers) to name but a few. But rather than compare LaMelo to Lonzo, why not appreciate his own path and watch him fly solo?

After all, this was a long time coming. It’s living up to the fanfare.