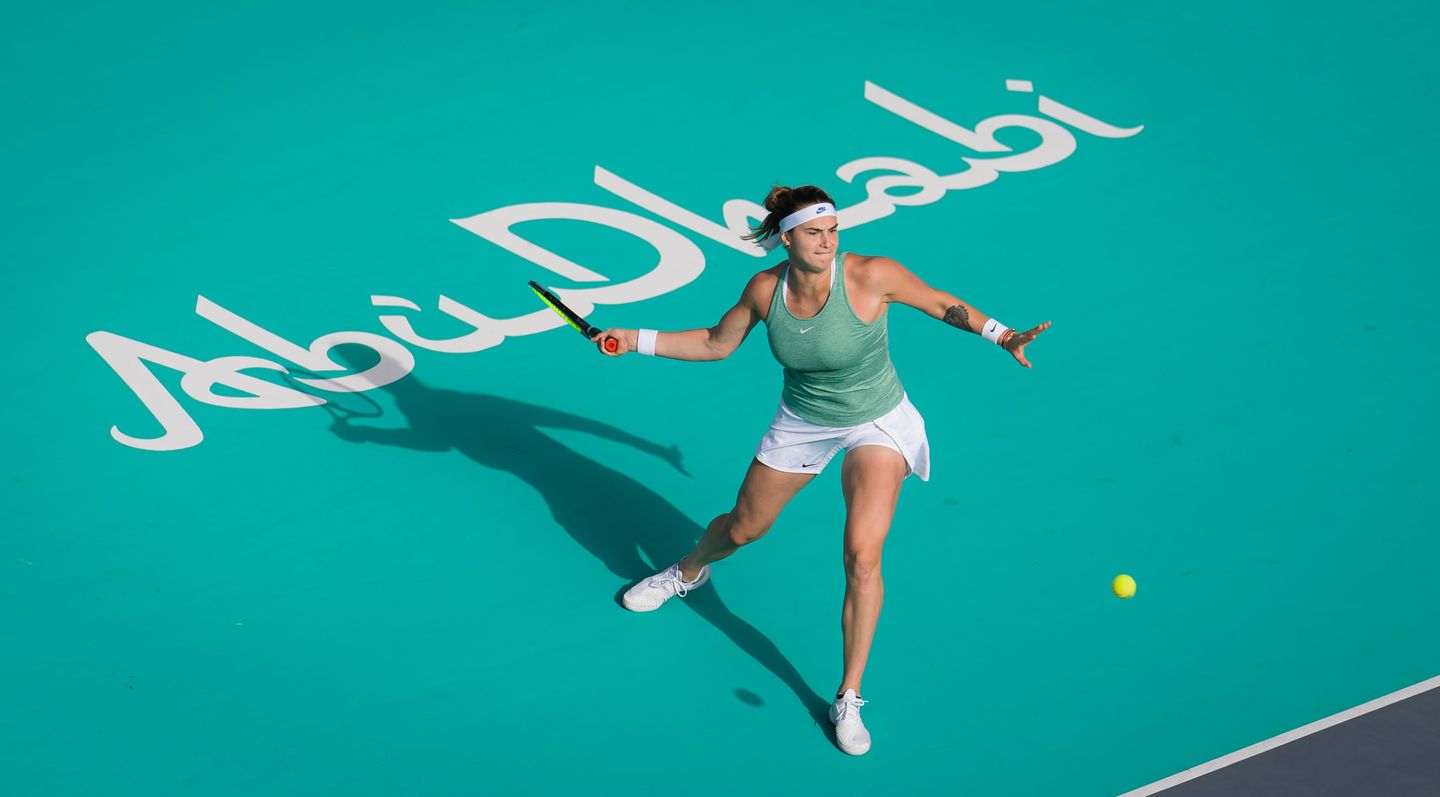 Aryna Sabalenka (#4) wasted no time in overpowering Maria Sakkari (#9) – 6-3, 6-2 in just under an hour’s play – booking her place in tomorrow’s final with a ruthless showing of striking accuracy and purposeful serving too. She’ll play new world number 36 Veronika Kudermetova in the Abu Dhabi finale, hoping to futher extend an impressive 14-match winning streak.

Sabalenka superb as she storms to victory

Sabalenka wasted no time in overpowering Sakkari, despite the Greek’s best efforts to recover

Sabalenka extended her win streak to 14 consecutive matches as she produced her best tennis of the tournament so far, blasting Maria Sakkari off court in an hour during today’s semi-final.

Sakkari, who was 1-3 in their H2H, started slowly again as we’ve grown accustomed to this week. Sabalenka, just like Kenin before her, raced into a three-game lead after just six minutes.

Sakkari had won just one of their first 13 points – an ace no less – and match commentators were wondering if this would prove a quick on-air assignment.

The next game lasted six minutes alone as the Greek did well to hold serve, despite wilting on second serve points over the course of the opening set (1/9, 11.1%). Sabalenka responded as you’d expect: crushing three straight winners on serve before restoring her comfy lead at 4-1.

Multiple superlatives were used to describe the Belarusian’s play, as she looked like she couldn’t miss at times. Sakkari needed to weather the proverbial storm, make individual points longer and win rallies.

That was easier said than done, as a deft drop shot presented three further break point opportunities. Keeping in line with the 22-year-old’s blistering start, Sabalenka only needed one.

It was 5-1 after 18 minutes. A barrage, bombardment, Sakkari was being overwhelmed by a more aggressive and efficient version of herself. But she wouldn’t just lay down and accept defeat.

A misjudgment on the line threatened to derail Sabalenka’s momentum and despite saving two break points, Maria charged forward to force an error and make it 5-2.

Despite her best efforts, she could only slightly improve the scoreline further for a 28-minute first set (6-3), though there was enough encouragement from the final few minutes to suggest Sabalenka’s level would inevitably drop. They both knew it.

It was importantly she took her opportunities to recover in the second, starting as she meant to go on by serving first. That was easier said than done as Sabalenka continued hitting winners when pushed into uncomfortable positions, but importantly Sakkari initially held serve.

The Belarusian’s first and only double fault of the match was followed by a timely ace and while Sakkari did well to start mixing up her shot selection, Sabalenka responded well whenever high-pressure situations came her way.

1-0 Sakkari quickly became 2-2 and despite saving four break points, those unforced errors continued to creep up and were punished as she was now 3-2 down.

Two double-faults on serve helped Sabalenka – as if she needed any – to a 5-2 lead and after just 54 minutes, she served for a place in tomorrow’s final.

More brilliant serving gave her three match points and another emphatic ace, no. 8 for the day, put the gloss on a complete performance. She’ll hope to continue this form in Grand Slam tournaments, where she’s failed to string these types of commanding displays together regularly.

Up next, she’ll face a first-time WTA singles finalist in either Russia’s Veronika Kudermetova after outlasting Ukrainian teenager Marta Kostyuk 7-6, 6-4. Kudermetova will move up to a career-high ranking of world no. 33, regardless of the result here.