After earning one of the biggest wins of his career by avenging his 2014 loss with a second-round knockout victory, Dustin Poirier had plenty to say – about the magnitude of this win over Conor McGregor, his unhappiness pre-fight while stressing newcomer Michael Chandler shouldn’t be next for a title shot: as an undisputed lightweight belt is all that eludes him now.

One of the first questions put to Dustin during his post-fight press conference was how this latest result featured on the list of various wins he’s earned throughout a busy career to date.

He said it was up there, while citing the fact he beat Max Holloway to become the division’s interim title-holder in April 2019 as a memorable moment too.

“Finishing a guy that’s never been finished like that? Touching that interim belt was so important for me, putting my hands on the undisputed world title is what I want to absolutely do but this is a big win.”

On what potentially changed from their first fight:

“I felt his presence less, his aura less, just saw him as a fighter – the first time I was kind of, a deer in the headlights – this time? I was fighting another man who bleeds just like me. I felt in the moment, aware, felt here and was in the moment, ready to take any advantage of opportunities that I could’ve gotten.” 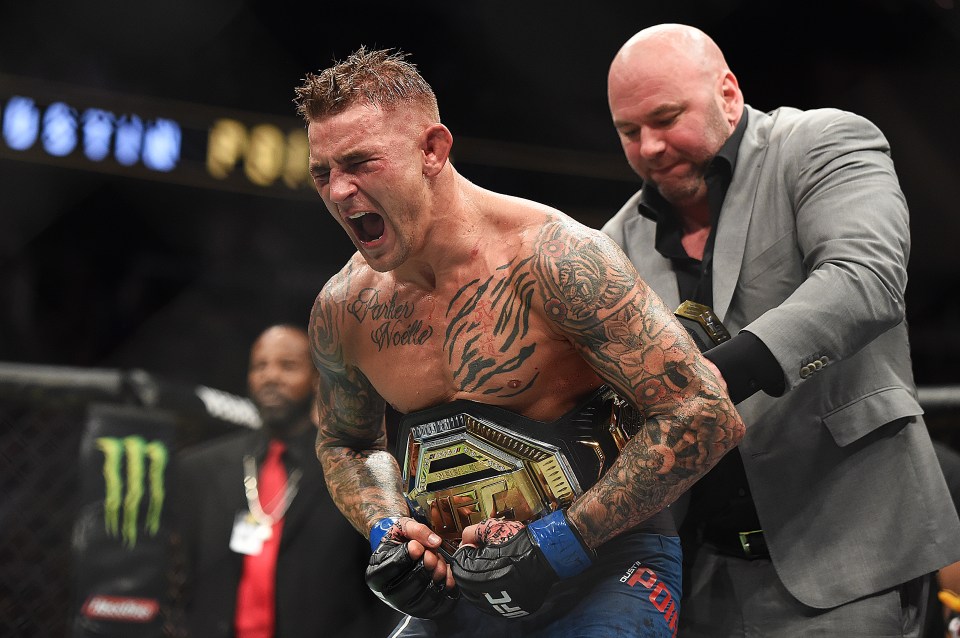 It’s his first Performance of the Night bonus since beating Eddie Alvarez in July 2018 and certainly makes a change from the thrilling Fight of the Night affairs we’ve often seen from him.

On the pre-fight nerves, frustration and being able to stick to his gameplan, he said:

“I wasn’t thinking about the first fight but every [fight] is a mental test. You have anxiety in the locker room, I’m sitting here for two weeks with nothing to do but think about this.

I was locked in: emotionless, felt nothing, very focused, didn’t enjoy warming up, two weeks of sitting in a hotel room but damn when I get that dog out and perform, I can scrap.

The gameplan was to kick, wrestle, box and mix it up… Mike Brown [his coach] was really big on me throwing calf kicks, we compromised his leg and was in a bad position early. Even when he checked, it wasn’t being done properly.

You can’t take many shots there, I know it was hurting. We’re 1-1 for knockouts, this is CTE Island, not Fight Island. We’ll see, you probably have to do it again right?”

Chandler next for lightweight gold? Poirier doesn’t think so

Although he ended that answer in a jokey manner, the 32-year-old refused to mince words when Chandler was being mentioned as his next opponent in a potential title fight next.

Interestingly, he name dropped Charles Oliveira and current champ Khabib, who appears set to vacate the belt once and for all after Dana’s admission earlier during his media scrum.

“Respect to Chandler but to come in, beat the guy I just beat? I’ve had 27-28 fights in the UFC to get my hands on gold, he should fight Oliveira or something. I don’t know what’s next, I’ll speak to Dana and the UFC but I can guarantee that I’m not fighting Chandler.

That’s not my position to be [calling the shots], but I’ve been in the division putting in work, fighting the best of the best. No disrespect to him, he speaks well and has a lot of respect, I’m not knocking him.

I lost to Khabib, beat Hooker, Khabib doesn’t want to come back, KO’d Conor, I’m the champ. I’m not going to fight a new guy, who just beat a guy that I just beat? Nah that’s not exciting.

Oliveira? 10 years, fought the best of the best, he’s been knocked down and got up time and time again. Why not him? There’s more work for Chandler to do.”

Speaking of Oliveira… On who should get the next title shot:

“Charles never had the opportunity. Gaethje came out here and got beat, as I did, but give Charles the chance, or let them fight to decide who gets it.”

During the TV broadcast, Daniel Cormier said Poirier told him immediately post-fight of his disdain to continue doing this anymore. On what he meant by it:

“I felt like in the locker room, felt flat… I’m damn good at it [MMA] but felt like really calm, it’s hard to put into words but I don’t really like this anymore. I’m not retiring, I’ve got so many ass-whoopings to give out, my mind and body are finally on the same wavelength, we’ll see what happens.

This whole last two weeks, the only part I liked was the fight. This is fight hotel, I’m cutting weight and the furthest I can go is my training room. It’s been a while since I got booed, walked back to the locker room with cheers on the exit – that’s what a lot of MMA fans are, fair weather so it doesn’t bother me.

This wasn’t payback, this is about progress, priority, putting my family in the position they’re in now – I’m glad I got him back and it makes for a great storyline, feels good but that wasn’t the driving force of this.”

He said he’ll go back to being a dad and has multiple ventures that can be explored outside the Octagon – whether it’s his foundation, selling hot sauce or otherwise.

However, he had an interesting future opponent in mind – besides a possible trilogy down the line with McGregor.

“I always wanted to whip Nate Diaz’s ass, a rematch with Conor interests me. I’m sure something will make sense but I don’t know right now – Diaz got away and talks a lot of shit online but we’ll see.

Everybody is different. Ring rust is real if you allow it to be, I get that real-life timing of a fight in training camps so it wouldn’t impact me.

When asked about the calf kicks, which ultimately proved McGregor’s downfall, he remembered a fight of his own that caused him real pain – a majority decision win over Jim Miller at UFC 208.

“I know from experience how bad those things hurt, a five-round fight would only make it worse… he started catching them after they landed, but I knew they were still hurting.

If he took me down then, you know, I’d throw some submissions up, I’m a black belt in jiu-jitsu and Jim Miller tore my leg up. I know how painful it is!

Holloway stressed he was the promotion’s best boxer but Poirier’s capability to alternate while evolving between featherweight and lightweight so well has shone through once more.

You can watch Poirier’s post-fight press conference in full here: