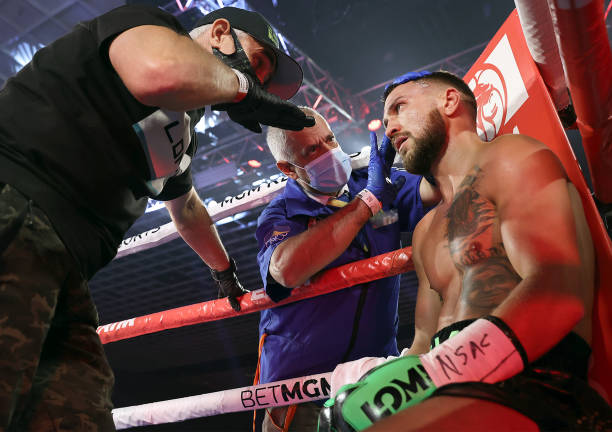 After losing his WBA and WBO lightweight titles, as well as the chance to claim IBF gold with a UD defeat by Teofimo Lopez (16-0) in mid-October, Vasiliy Lomachenko (14-2, 10 KOs) has vowed to make a memorable return later this year. He’s currently the #1 contender for Devin Haney’s WBC belt, #2 in the WBA and WBO rankings but turns 33 next month so time is of the essence.

Lomachenko was long heralded as one of the world’s top pound-for-pound boxers, is a former world champion across three separate weight classes (featherweight, junior lightweight, lightweight) and also a two-time Olympic gold medallist to boot. Even with such an impressive resume though, it’s unsurprising to see how quickly he’s been seemingly discarded by critics.

He underwent surgery on his right shoulder – for the second time in three years – after revealing he was injured and reaggravated a problem during the second-round against Lopez.

Although news of the injury came quickly after the loss Saturday, manager Egis Klimas said:

“We didn’t want to look like we were looking for excuses or something.

If it’s possible, we would like to have the rematch. If they are so tough … are they willing to come back and do that?”

Lopez was busier (183 of 659 thrown, 28%) but Lomachenko was more efficient with less than half the output (141 of 321, 44%). There was no rematch clause inserted in the contract and Lopez’s comments earlier this month reinforce the stance that he’s uninterested in a rematch.

WBC interim title-holder Ryan Garcia, who recovered from an early knockdown to knock out Luke Campbell earlier this month, is reportedly in advanced talks to face Manny Pacquiao.

WBA (regular) lightweight and super-featherweight champion Gervonta Davis is in an awkward space after a previous verbal agreement to fight Garcia next. He KO’d Leo Santa Cruz on Oct. 31.

He about to do an exhibition wit Manny..definitely don’t want the fight no more! I’m on to the next 👌🏻 https://t.co/FtpGyR4hvu

Meanwhile, WBC champion Devin Haney said last week that he’ll fight Javier Fortuna or Jorge Linares next if there’s no lightweight unification bout agreed with Lopez next. Those are the four brightest names across the division, which further highlights Lomachenko’s waning powers.

If this screenshot is anything to go by, Loma’s hopes of reclaiming titles in the division aren’t exactly high right now.

Time isn’t on his side when it comes to waiting patiently, hoping one of them takes the risk.

That may mean he returns to 130lbs: WBC champion Miguel Berchelt (37-1, 1 NC), IBF title-holder Joseph Diaz (31-1) and rising star Shakur Stevenson (15-0) are among the notable names, but would he want to move down without resolving his unfinished business first?

Time will tell, but the longer this stalemate continues, the harder it is to foresee a redemption route back to the top for Lomachenko in what is a young man’s sport after all.