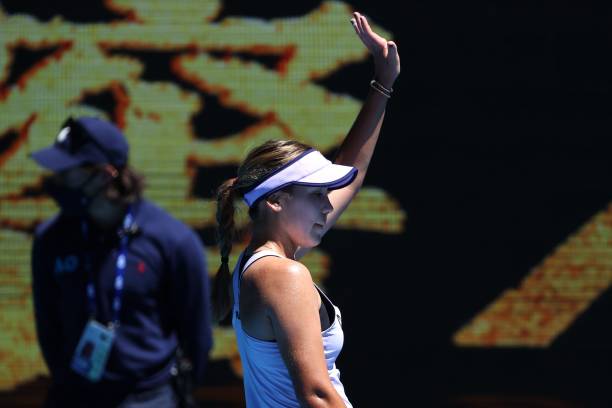 Defending champion Sofia Kenin wasn’t satisfied but crucially got the job done, while there were comfortable wins for Cori Gauff, Daniil Medvedev, Rafael Nadal and some surprising results too – David Goffin, Victoria Azarenka and Johanna Konta all crashed out on Day 2.

Defending champion Kenin was made to work hard for her straight-sets victory over Australian wildcard Maddison Inglis – ultimately winning 7-5, 6-4 after recording 27 unforced errors. The last time she did that at a Slam, was during an eventful run to the final in Paris last October.

Her reward is a tricky clash against Estonia’s Kaia Kanepi on Thursday, who dropped just four games en route to a comfortable win beyond US Open 2018 semi-finalist Anastasija Sevastova.

“I’m obviously happy to get through, had nerves but love being back here, thanks guys [fans] so much. She [Inglis] has played well, I knew it was going to be a tough match even though I wasn’t feeling 100%, always nice to win.

Winning seven [matches at a Slam] is obviously tough, I’m not happy with the way I played but I’ll do everything I can to get ready for round two.”

Behind good serving, Gauff gets off to winning start 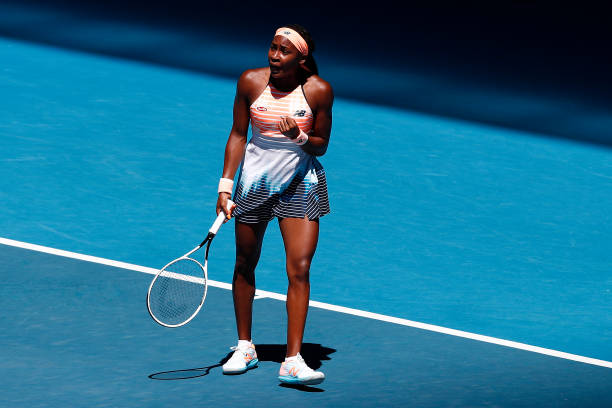 Cori Gauff‘s reward for a purposeful start to her Australian Open campaign is a tricky assignment against fifth seed Elina Svitolina on Thursday, after blasting past Switzerland’s Jil Teichmann.

Eight days after a gruelling encounter between them in the Gippsland Trophy with two tiebreaks, the 16-year-old was considerably more decisive as she eased to victory, dropping just five games.

That night, Gauff recorded eight double faults but crucially cleaned up her serving after losing rather abruptly in three sets against Britain’s Katie Boulter 24 hours later. She revealed as much post-match in her on-court interview, while making sure to thank her youthful fans for watching:

“I’m happy you came out to watch me play, so thank you – felt good, played her last week and we had a three hour match so I changed up the pace, kept being aggressive while trying to stay in the moment and enjoy it.”

Svitolina had a more arduous afternoon against Czech Republic’s Marie Bouzkova but ultimately emerged with a straight-sets win too – 6-3, 7-6. She’ll hope to build on successive quarter-final finishes (2018, 2019) after a R3 defeat last year against finalist Garbine Muguruza. 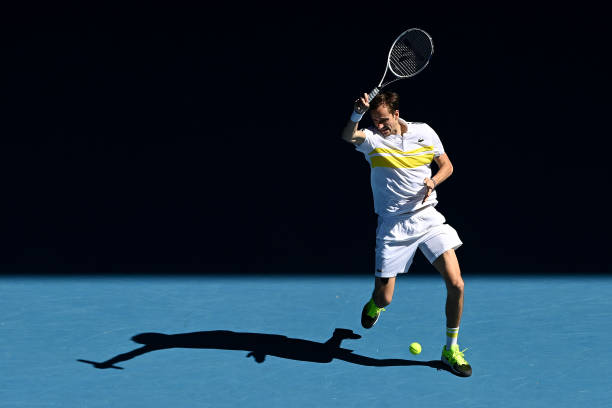 2020 ATP Finals winner Daniil Medvedev made sure to get off to a good start, producing a high level of tennis en route to a straight-sets win – 6-2, 6-2, 6-4 against Canada’s Vasek Pospisil.

Pospisil did well to show more resistance and push the fourth seed more in set three but the difference was emphasised when he served at 4-4. After watching a return ace fly past him, two unforced errors presented the 24-year-old with three break point chances to serve for the match.

Medvedev took the second as Pospisil’s drop shot floated long and unsurprisingly, he didn’t need a second invitation on serve to finish the match in style. Afterwards, he was asked to reflect after successful preparation with his native Russia in the ATP Cup last week:

“It’s good we didn’t lose a match [he and Rublev played], a lot of tough matches so I didn’t know how it would be physically. I’m feeling good, we’ll see. Vasek can play really good tennis but was struggling a bit too with his back and hard quarantine, so I was fortunate in that sense.”

Up next is Spain’s Roberto Carballes Baena, who needed four sets to outlast Hungary’s Attila Balazs – earning a second-round berth in Melbourne for the first time in his career to date. 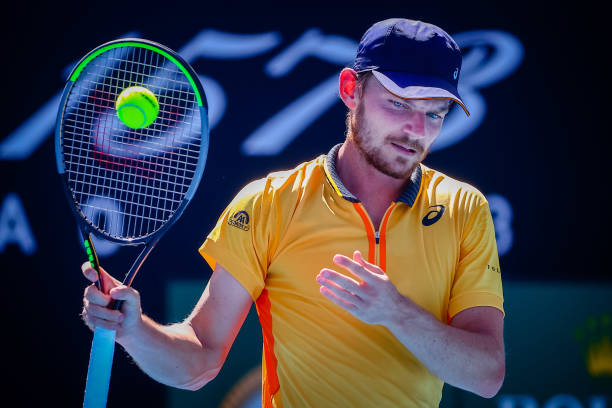 21-year-old Australian wildcard Alexei Popyrin, who has made the third-round at his home Grand Slam two years running, could very well make it three this year after recovering from a set down to hold his nerve and knock out 13th seed David Goffin in just shy of four hours on-court.

Goffin was 5-3 up in the fourth set and served for a second-round place, but blinked under pressure with a partisan crowd unapologetically firing Popyrin up.

The situation only worsened after, as the Belgian was 2-0 up in the decider but lost six of the next seven games, with 14 unforced errors and five double faults helping complete the shock.

And look at that reaction 💪🏼#AusOpen pic.twitter.com/r7UTaUigrP

Plenty of criticism will be levelled at Goffin for choking under pressure, but Popyrin did well to create seeds of doubt throughout – the crowd certainly played their part as you’d expect.

South Africa’s Lloyd Harris in round two on Thursday, after the 23-year-old recovered to beat Danish lucky loser Mikael Torpegaard in four sets and book a R2 place for the first time himself.

back injury aside, Nadal passes first test with flying colours 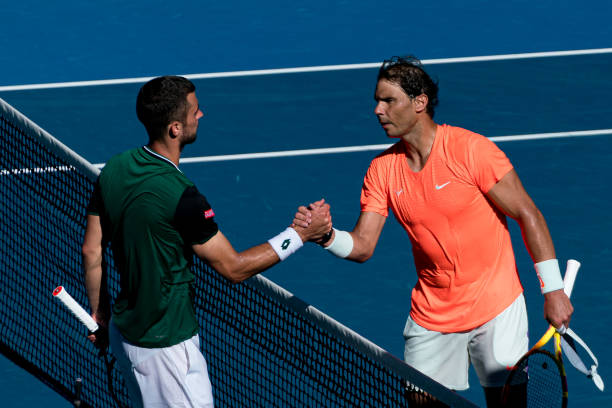 Rafael Nadal avoided a banana skin in Serbia’s Laslo Djere, needing less than two hours to win at the Rod Laver Arena – a reassuring sign as tests get tougher if he’s to make another deep run.

He didn’t show signs of the back injury that has plagued him in recent weeks, but revealed post-match that it’s been tough and is a day-to-day problem he’s currently managing.

“It’s been a tough 15 days for me – needed to survive today and that’s what I did. Tried to focus all the time, happy to be through, did a good job today and straight sets, that’s what I need.

Found a way to go through, not ideal preparation but I’m enjoying again in this amazing country, happy and want to be here as long as possible… tennis is important but we’re facing something even more important [COVID-19] now.”

He’ll play American qualifier Michael Mmoh next on Thursday in round two, after the 23-year-old squeezed past fellow qualifier Viktor Troicki in a gruelling five-set match with three tiebreaks.

Azarenka fumes after Jessica Pegula stuns her in straight sets 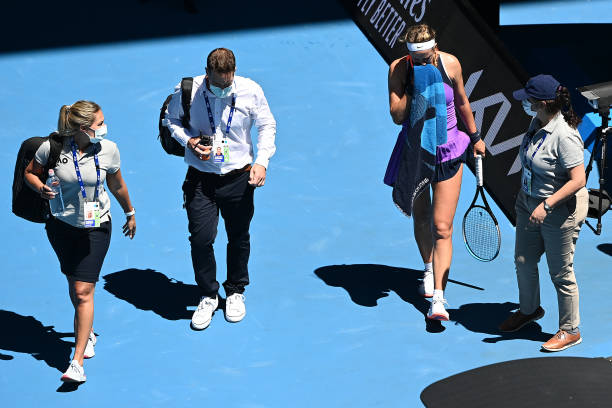 “Not being able to have fresh air, that really took a toll for me to adjust. I don’t know how to prepare after two weeks’ quarantine, don’t have a blueprint so it’s all about trying to figure it out and I didn’t, not this time.

I don’t know why we are asked about medical conditions, all of this is going out on the Internet afterwards, people talk or judge, I don’t understand that rule when someone is sick, injured or whatever, they have to give a reason.”

Midway through the second set, Azarenka needed courtside treatment with an asthma pump during a medical timeout and was visibly playing through pain. Pegula will face US Open 2011 winner Samantha Stosur in R2, after she beat fellow Australian wildcard Destanee Aiava.

Other results – wins for de Minaur, Tsitsipas and Konta’s injury 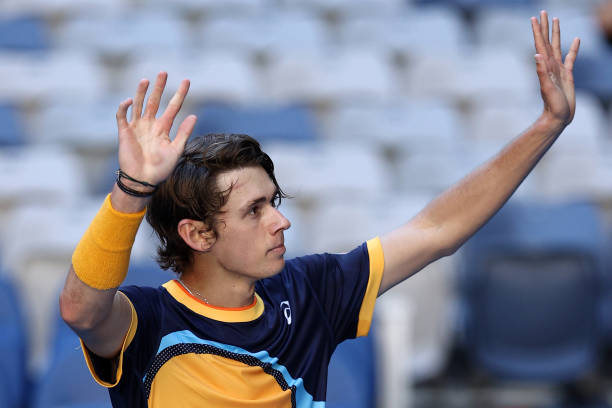 No. 21 seed Alex de Minaur earned a straight-sets win (7-5, 6-1, 6-1) vs. America’s Tennys Sandgren. The home favourite has Uruguay’s Pablo Cuevas in R2 and Nadal lurks in his section.

Also in that part of the draw is Britain’s Cameron Norrie, who outlasted compatriot and 30th seed Dan Evans in four sets – he faces Russian qualifier Roman Safiullin on Thursday.

Karolina Pliskova (#6) raced to a comfortable victory over Italy’s Jasmine Paolini in 47 minutes – capping her win by slamming a forehand winner down-the-line.

Tsitsipas races into R2, then saved a precarious interview 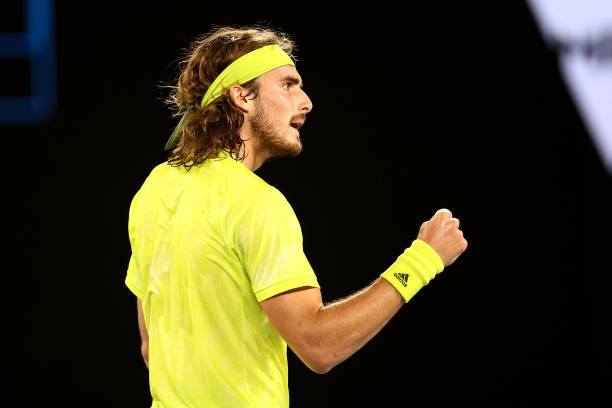 Stefanos Tsitsipas made light work of his opening round match against France’s Gilles Simon, dropping just four games in one hour 33 minutes.

He plays Australia’s Thanasi Kokkinakis next after the 24-year-old was impressive against Japan’s Soon-woo Kwon as he continues his recovery from a number of troublesome injuries.

Tsitsipas, a semi-finalist in Paris four months ago, found himself recovering to save a precarious on-court interview as his honest-yet-awkward nature was on show for all to see.

No transcribing quotes will quite do the moment justice, so watch for yourself:

He’ll certainly be hoping to improve upon a R3 finish here in 2020, after a semi-final finish at the Happy Slam two years ago. If he plays the way he did against Simon, that should be no problem. 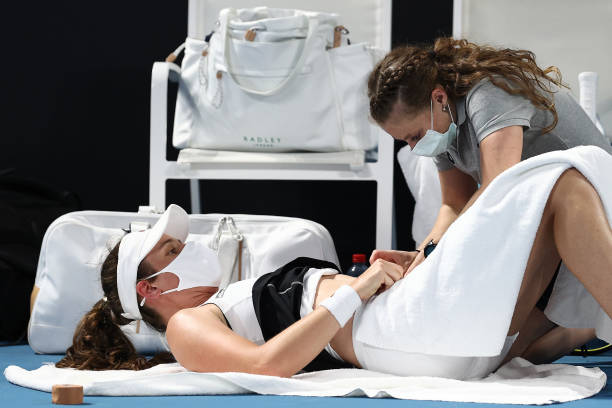 Konta during her medical timeout in the first set

She didn’t know at the time, but Juvan didn’t need to return another ball as Konta double faulted once more and was unable to continue – as commentators explained a previous medical timeout (abdominal) severely hampered her ability to serve with speed or consistent accuracy.