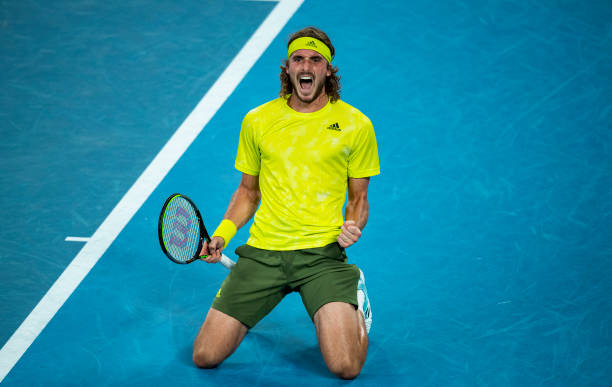 Fifth seed Stefanos Tsitsipas needed all five sets to outlast home favourite Thanasi Kokkinakis, who again proved he can hang with the world’s best at this level – despite his injuries. Before, there was a tearful exit for defending champion Sofia Kenin while top seed Ashleigh Barty survived a scare to beat wildcard Daria Gavrilova and Elina Svitolina beat teenager Cori Gauff. 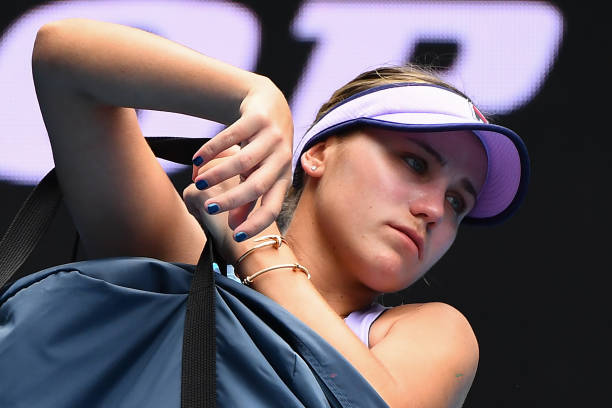 It was a day to forget for the defending champion, who said she couldn’t handle the pressure

She made clear just how unhappy she was after an error-strewn first-round performance but importantly got the job done against Australian wildcard Maddison Inglis on Tuesday.

However, a straight-sets loss – 6-3, 6-2 – to Estonia’s Kaia Kanepi means the women’s defending champion has crashed out at the earliest stage in Melbourne since Jennifer Capriati 18 years ago.

Perhaps this early defeat shouldn’t be that much of a surprise, given how she has made public the mental pressures which challenged the 22-year-old’s first Grand Slam defence. However, the result said more about Kanepi, at her blistering best and needing just 64 minutes to seal the job.

With 16 victories in her previous 17 matches, it was no wonder Kenin wasn’t looking forward to another meeting with the 35-year-old. Kanepi saved all seven break points faced, with a 22-10 edge in total winners too. During a tearful presser, Kenin admitted she struggled with nerves:

“I couldn’t find my rhythm, I was obviously way too nervous. I obviously felt like I’m not there 100% – physically, mentally, my game. Everything just feels real off, obviously. It’s not good. I know I couldn’t really handle the pressure.”

Barty takes wobble in her stride against wildcard Gavrilova 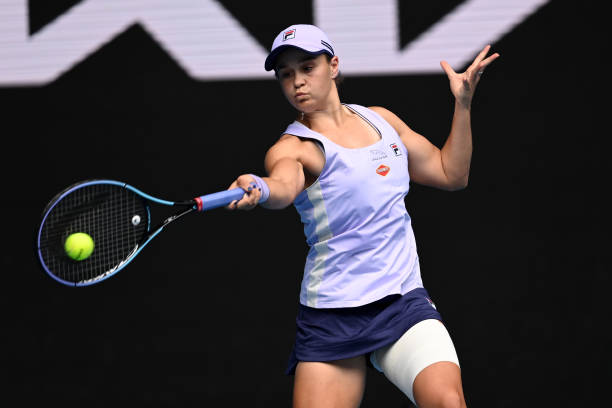 After a nervy finish, world no. 1 Barty will face Russia’s Ekaterina Alexandrova in R3 this weekend

Aiming to become the first Australian to win the women’s title at home since Chris O’Neil in 1978, world number one Ashleigh Barty caused surprise after relinquishing a 5-2 second set lead but importantly survived a nervy tiebreaker to beat plucky wildcard Daria Gavrilova 6-1, 7-6 (9-7).

After losing just 10 points in the opening round, this match threatened to be another lopsided affair before Barty’s alarming wobble when serving to finish.

“It’s a different challenge every single day, it’s trying to the best I can – whatever that level is.”

She’ll play Russia’s Ekaterina Alexandrova (#29) on Saturday, in a section no longer featuring Britain’s Heather Watson after the 28-year-old – one of many players forced to adapt in hard quarantine – did well but ultimately was bested in three sets against 21st seed Anett Kontaveit. 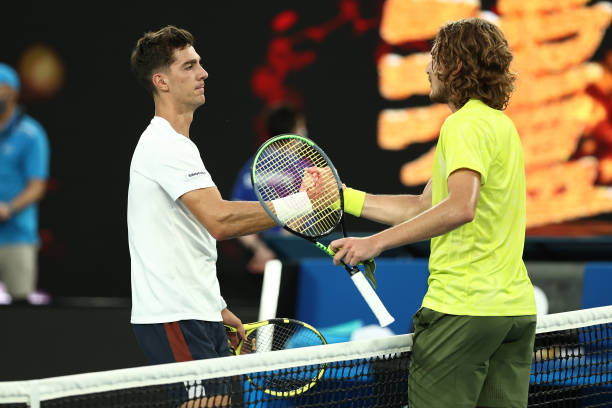 Just as Stefanos Tsitsipas shook his fist in defiance and perhaps relief when the first match point arrived, Thanasi Kokkinakis did what he’s been doing for a number of years since becoming the youngest winner of a Grand Slam match back in 2014. He fought valiantly.

An hour and change elapsed before the Greek, seeded fifth at these championships, would have another opportunity to close out an electric five-set clash no-one was expecting.

However, Kokkinakis raised his level during those big moments – even with the 24-year-old’s energy being sapped throughout – while Tsitsipas’ inability to convert break points hurt him.

Shoulder, pectoral, kneecap, health concerns, serious questions over an early retirement and more besides. Thanasi has been through it all, was emotional during his straight-sets win over South Korea’s Soonwoo Kwon on Tuesday and dropped just six games.

This was a heartbreaking loss to someone he knows well, after recording 23 aces and producing multiple moments to make the Rod Laver Arena crowd explode in excitement and anticipation.

He crunched 58 winners and this surpassed his previous longest match (US Open, 2017) on tour – with four hours 32 minutes on the clock by the finishing line.

Tsitsipas struck the ball beautifully and rose his level as the home favourite tired, with 20 more winners and less errors in clutch moments to take over and ultimately settle things in the fifth.

“I just want an ice bath right now, going to keep it short – you know what happened last time – it was a great move by the organisation to involve fans, having that energy back and feeling like I’m playing tennis again.”

“Thanasi is a great competitor and fighter, as you saw, he knows he has potential, is a great server, [has] all the weapons behind the baseline, I really enjoyed being out here, showing the world high quality tennis.”

He added it was a shame they, as players, missed Thanasi on tour with them and is happy to see him back playing, in a generation that has such diversity with plenty of younger contenders fighting for world number 1.

Up next, he faces Sweden’s Mikael Ymer – born just a month after him – who became the first player from his country to reach the third round at a Grand Slam in a decade after comeback wins over Poland’s Hubert Hurkacz and highly-rated qualifier Carlos Alcaraz. 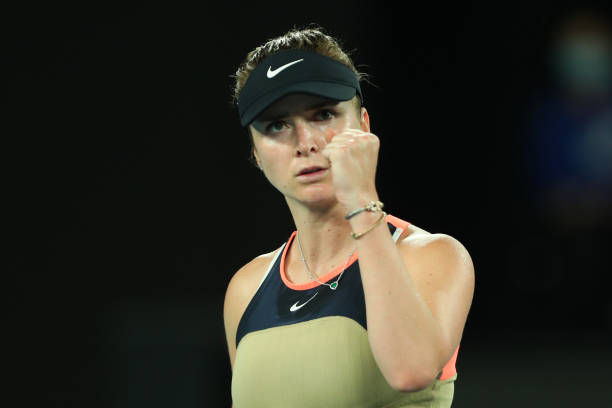 This affair was likely to be decided by who played the bigger points better and unsurprisingly, it was the more experienced Elina Svitolina – with 15 WTA singles titles – who produced her counter-punching best in a memorable first H2H encounter against a spirited Cori Gauff display.

Gauff needed aggression and a consistent serving clip to stand any chance, both of which were on show from the early exchanges. Whether she could replicate those moments of brilliance when things inevitably got tight though, was the key to victory.

Svitolina saved an early break point and that rather typified an efficient showing from the fifth seed, as they exchanged service holds.

Gauff’s shot selection against the very best has been found wanting and the same could be said here too. Svitolina fired a passing winner beyond her, going 30-0 up on the 16-year-old’s serve. 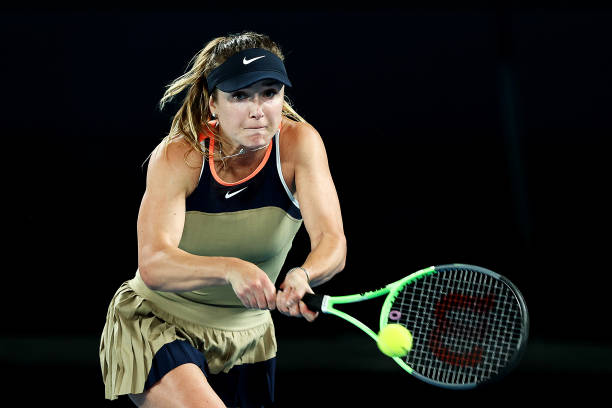 Svitolina counter-punched well, matching Gauff’s aggression by forcing her constantly on the move

A forehand into the net gave Elina two set points and despite doing well to save one, Svitolina snatched the second to take a 6-4 lead after 37 minutes by forcing another error into the net.

Svitolina had waited to pounce, making Gauff play extra shots as her decision-making was shaky in clutch moments – refusing to show any striking variety and playing into the Ukrainian’s hands.

Early in set two, it was more of the same. Gauff’s suffocating attack presented her with two early break point opportunities but Svitolina – unruffled – responded with four straight points.

It was excellent and equally ruthless: wrongfooting Gauff with a forehand down-the-line winner, before the teenager’s scary tumble mid-rally hurt her chances of recovery as Svitolina continued shifting the ball from left-to-right behind the baseline, forcing her to cover ground aplenty.

They continued to exchange service holds and the crowd roared Gauff on as she won an enthralling rally before storming back from a potentially precarious situation on serve at 3-3. 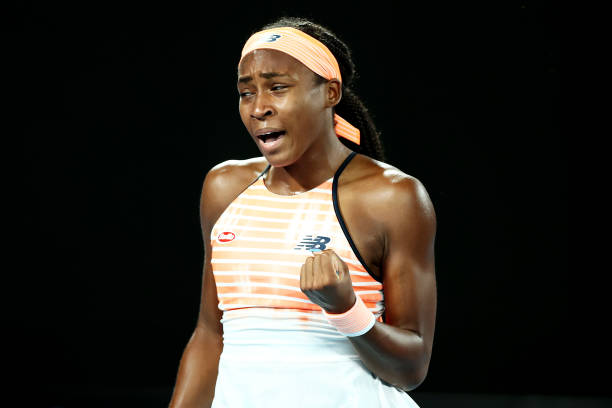 Finely poised at 15-all (3-3), deja vu reared his head through the door as two more forehand errors spluttered off Gauff’s racquet and suddenly it became apparent she couldn’t replicate Simona Halep‘s herculean recovery yesterday. Svitolina wrongfooted her again, 4-3 up now.

The timing of the onscreen graphic was cruel, but spoke volumes: Gauff was 0-of-4 on break points and her crunch time struggles were typified by a forehand smash miss on serve.

That presented Svitolina with a break point opportunity that she was waiting patiently to gladly gobble up, and the 5-3 set advantage suddenly meant she was serving for a R3 place now.

Her point construction helped her seal a 6-4, 6-3 straight-sets win with an unreturned volley at the net, one that will sting Gauff in the moment but is precisely the match she should learn from.

The 26-year-old praised the high levels of tennis on display, both from her and Gauff, as well as the energy that having a crowd spectating brought:

“It was a great match from both, serving really good, high level, had a little chance to break and did. Energy from the crowd, it’s always amazing to play in-front of so many people, we’ve been missing it so much.”

Putintseva won 6-4, 1-6, 6-2 vs. Belgium’s Alison Van Uytvanck in a section that has opened up after R1 defeats for two-time Grand Slam champion Victoria Azarenka and Maria Sakkari (#20).

Other results, featuring coric’s exit and another de Minaur win 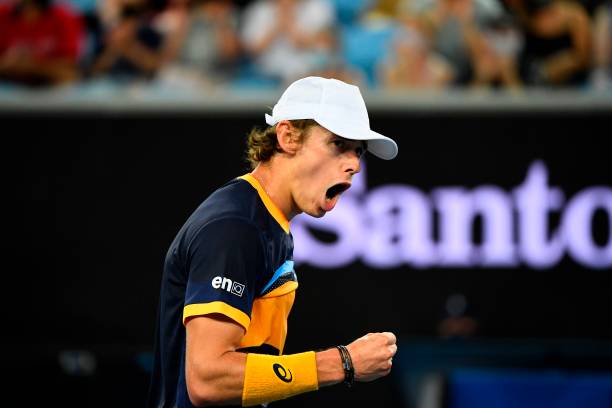 Uruguay’s Pablo Cuevas put up a good fight in the third set, but it was ultimately too late as the 21st seed prevailed in straight sets.

Fognini recovered from a set down – twice – doing enough to beat compatriot Salvatore Caruso with a 14-12 deciding set tiebreak after having four match points and saving one too late on.

Rafael Nadal features among their section of the draw, as well as Britain’s Cameron Norrie – who is currently engrossed in an intriguing battle against Russian qualifier Roman Safiullin.