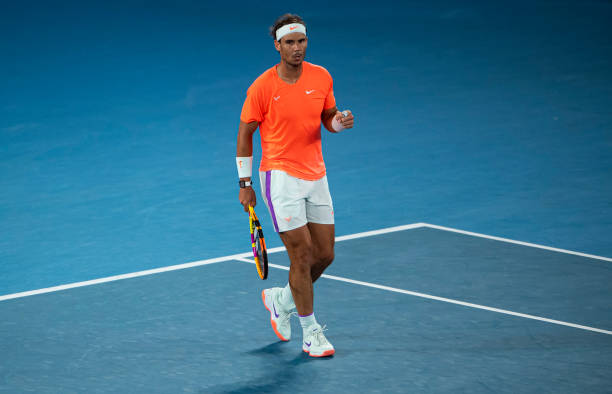 There were routine victories for Stefanos Tsitsipas and Andrey Rublev, Matteo Berrettini had an injury scare but managed to outlast Karen Khachanov in three tight sets. That was before Rafael Nadal and world number one Ashleigh Barty found ways to grit past tricky challenges in the night session, booking their respective places into the second week in Melbourne. 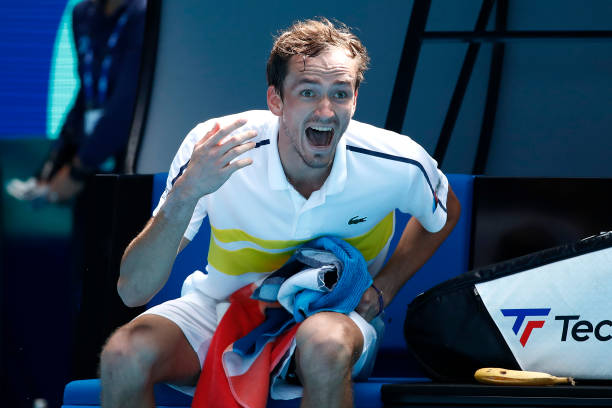 World number four Daniil Medvedev finally won his first five-set affair (6-3, 6-3, 4-6, 3-6, 6-0) at a Grand Slam, at the seventh time of asking, but the Russian certainly made things more difficult than they needed to be against Serbia’s Filip Krajinovic, seeded no. 28 at this tournament.

After needing just 67 minutes to take a two-set lead, he was broken early in set three – then broke straight back, before squandering three break point chances with things finely poised at 4-4.

That proved key, as he lost the next game too and subsequently the set 6-4.

Multiple angry rants in different languages directed at coach Gilles Cervara saw the 40-year-old depart the empty Rod Laver Arena stands, which ended up helping the 24-year-old eventually recentre – winning the decider with a bagel (6-0) after 19 unforced errors in the previous two sets.

He was honest with his assessment on an eventful afternoon post-match and will be hoping for a more straightforward outing in Monday’s last-16 clash against America’s Mackenzie McDonald.

25-year-old McDonald is 0-2 in his H2H meetings against Medvedev but reached round four of a Grand Slam for the second time in his career – three years after doing so at Wimbledon.

Tsitsipas and Rublev ease to victory 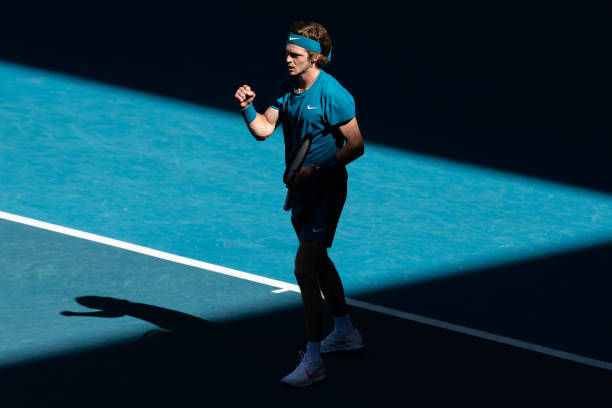 Rublev’s level increased as time wore on, easing to a comfortable win against Spain’s Feliciano Lopez

By contrast to his compatriot and ATP Cup teammate, Andrey Rublev needed little over 90 minutes to beat Spain’s Feliciano Lopez 7-5, 6-2, 6-3.

Rublev will play Norway’s Casper Ruud (#24) for a quarter-final berth, after the 22-year-old beat Romania’s Radu Albot in four sets – who stunned no. 12 seed Roberto Bautista Agut in R1.

After facing the prospect of an early exit against a familiar face in R2, Stefanos Tsitsipas looked back to his clinical best against Sweden’s history-maker Mikael Ymer.

Tsitsipas had almost double Ymer’s winners (27-14) and just 20 unforced errors – his lowest of the tournament – besting his agemate after a competitive first set, ultimately winning 6-4, 6-1, 6-1. 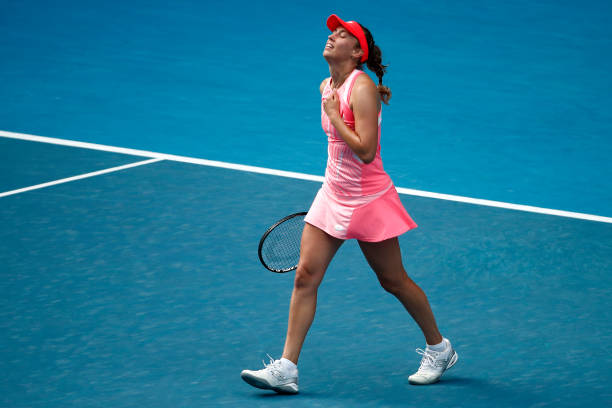 Mertens dropped just three games against the 11th seed, winning in just over an hour

After going the distance during the first two rounds to beat Lauren Davis and Svetlana Kuznetsova, 11th seed Belinda Bencic would’ve wanted more time to assert herself against Belgium’s Elise Mertens. Instead, she was helpless – on the receiving end of a true striking clinic.

Mertens broke her early and without warning, that was the beginning of the end for the Switzerland international – winning just 52% of first serve points over a chastening 63 minutes.

She’ll look to continue with that efficiency against no. 25 seed Karolina Muchova in round four, who recovered from 5-1 down to win 7-5 in the second set and complete a surprising straight-sets victory (7-5, 7-5) against world no. 6 and Czech Republic compatriot Karolina Pliskova.

Svitolina, Pegula and Vekic all win 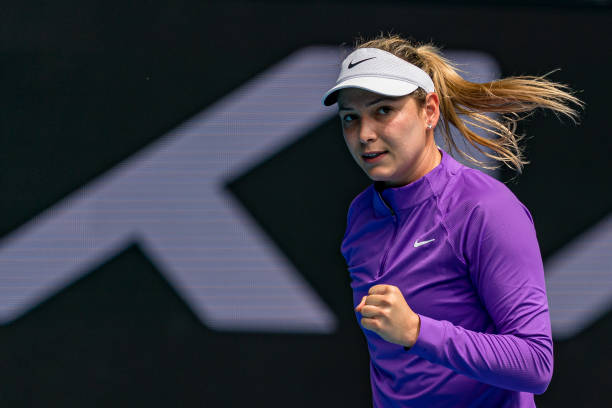 America’s Jessica Pegula has continued to show her win over 12th seed Victoria Azarenka was no fluke. After dropping just one game against US Open 2011 winner Sam Stosur in R2, she won comfortably – 6-2, 6-1 past France’s Kristina Mladenovic.

Whenever things got tight (3-1 first set, 1-1 second), she was always on hand with the right answers to stifle the 27-year-old despite both enduring sketchy service games late on.

She faces much stiffer opposition in the form of fifth seed Elina Svitolina early next week in round four, who overcame a sluggish start to blast past Kazakhstan’s Yulia Putintseva 6-4, 6-0.

Kaia Kanepi‘s tournament came to an end, though it really shouldn’t have when the Estonian was up a set and break at 3-0 in the second set against Croatia’s Donna Vekic. The 28th seed fought back, game-by-game, saving a match point before taking set two to a tiebreaker (7-2).

They exchanged breaks of serve and during an engrossing deciding set, Vekic’s drastically  improved first serve percentage (78%, up 24%) helped her to eventually earn a R4 berth.

She’ll play America’s Jennifer Brady with a quarter-final berth up for grabs on Monday, after the no. 22 seed dropped just four games against Slovenian qualifier Kaja Juvan. 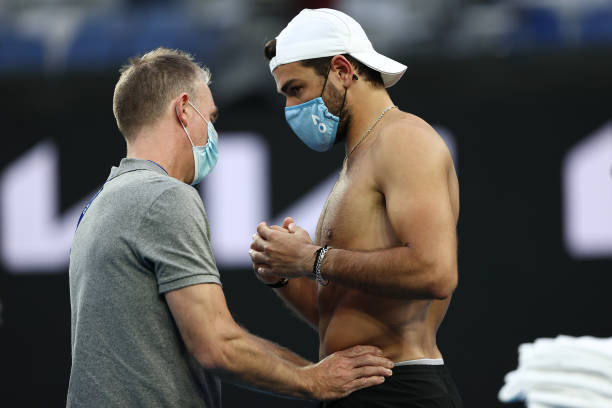 Berrettini needed a medical timeout deep into the third set vs. Khachanov and is hopeful he’ll recover

Just a few games beforehand, the 24-year-old called for the trainer and needed a medical timeout after straining to retrieve a shot mid-rally. You could understand him fearing the worst.

As he explained post-match, the physio said one of his rib muscles just wasn’t working properly but he was feeling the pain when serving – hoping it would subside so he could finish strong, avoiding a probable five-set battle that Djokovic was suddenly needing to survive just yesterday.

“I was playing good, feeling the momentum and all of a sudden felt this [rib injury], really glad I could win the third set and have to do a great job with my physio to get back on court in two days. Let’s hope so.

I’m sorry for the players and miss the crowd, a great event like this deserves one. Hopefully it’ll be back in a few days, and I can be back for them.”

If he’s to do so, he’ll have to beat world number six Tsitsipas on Monday. He continued:

“We know each other pretty well, he’s a great player and fighter, we played twice and he won twice – one year here, so for sure it’s going to be a battle but I’m thinking about my body and hope I can fight my best in two days.”

BARTY wins again, but must be better 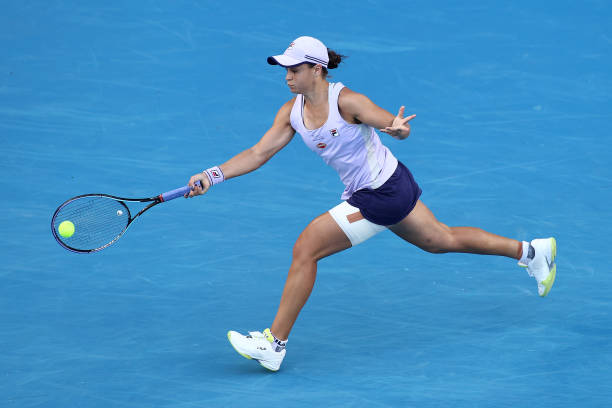 Barty endured a few wobbly moments of her own, despite another straightforward scoreline

World number one Ashleigh Barty won 6-2, 6-4 against Russia’s Ekaterina Alexandrova but the 24-year-old doesn’t need telling that her performance – while good in parts – was largely patchy.

She’ll need to be better as the later rounds loom if she’s to fulfil the home favourite prophecy this year, having been engrossed in a shaky back-and-forth second set where Alexandrova missed the opportunity to consolidate an early break before shot selection ultimately hurt her.

Barty recorded 14 winners and 19 unforced errors but as you’d expect, raised her level just enough in the big points to force more mistakes against an opponent who has never surpassed R3 at a Grand Slam since turning professional in 2011. Her lack of a killer instinct was clear.

On playing without a crowd, which she did for the first time since last year’s COVID-19 pandemic, Barty had this to say:

“Very intimate, I like the sound [of the ball]. I’ve never played her [Alexandrova] before, the start was good – I’ve never experienced this before but didn’t want it to affect the way I play.”

She faces America’s Shelby Rogers in the last-16 on Monday, who is currently enjoying her best run in Melbourne after a quarter-final finish in Flushing Meadows last year. 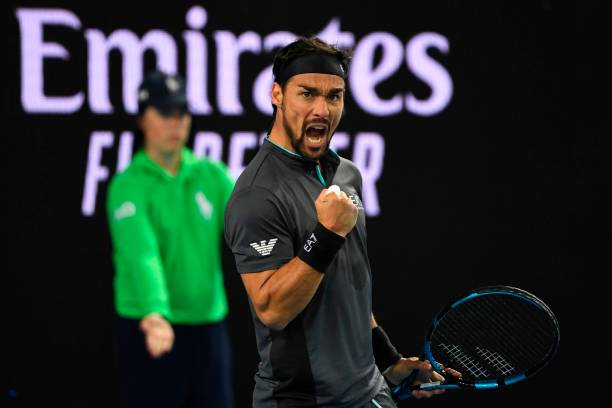 His shot-making and timely pressure at the right time helped him earn break point opportunities galore (5/8 converted), so much so that even the Italian admitted he was surprised post-match.

“It was better for me without [the] crowd of course, he’s Australian so… a lot of running because he’s one of the fastest on the circuit, got a bit tired at the end but it’s normal. I’m very happy because I’m not expecting to play like that.”

This was their first H2H meeting and while de Minaur did well to stay competitive where he could, that was all he could do. Fognini was playing at such a high level that even he was rushing through points in moments where adopting patience would’ve helped him get off court quicker.

He won one more point (28-27) in set one and you couldn’t wipe the smurk off his face midway through the second as he earned another break – having saved one himself ten minutes earlier.

de Minaur was gutsy but overzealous with his shots, missing two consecutive forehands to gift Fognini a 4-2 lead. The 33-year-old nonchalantly shifted de Minaur from left-to-right, deep behind the baseline while keeping his foot firmly on the accelerator as the finish line neared.

5-1 up in the third set after winning a gripping rally to finish the previous game, de Minaur saved two match points as Fognini’s impatience grew and suddenly he had a chance. It didn’t last long.

de Minaur overcooked what would’ve been a forehand winner up the line to present the experienced veteran with a third match point, which was emphatically sealed with a timely ace.

“He’s really young so for sure, already top 20, won the first tournament, has everything to improve, a really good guy and I wish him the best for the future – for sure he’ll be on top.” – Fognini on de Minaur’s future

Nadal forced to step it up against spirited norrie effort 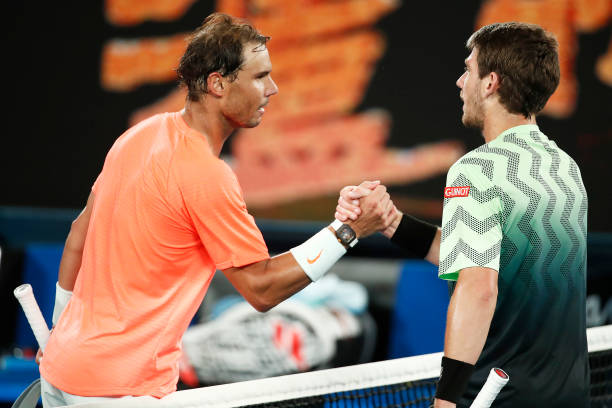 After easing to straight-sets wins over Serbia’s Laslo Dere and American qualifier Michael Mmoh in the first two rounds, the 34-year-old certainly found himself stretched at times against Norrie.

But as he usually does, the Spaniard found a way to win – especially after being broken early in the first set.

Across the ATP tour, only Djokovic can say he’s better at breaking straight back than Nadal and he raised his level while pumping his fist as the scores read 3-3 through nearly 30 minutes.

If you were watching, the subtle body language cues rather spoke volumes for how Nadal was pushed in the first half-hour or so, a theme that continued despite Norrie losing that set 7-5.

Rafa made sure to clean up his unforced errors in set two and after Norrie saved two early break points, he couldn’t do the same a few minutes later – a makeable drop shot miss and double fault presented three more opportunities. Nadal gladly took the first with a volley at the net.

He looked unstoppable at the net throughout (11/14, 79% points won) and while Norrie did well to stay competitive through the third set too, there are ultimately levels to this game.

Even when he’s not at 100%, Rafa knows how to close out tricky situations with minimal fuss and did so – completing the match in straight-sets after Norrie’s 43rd unforced error of the evening.

He spoke about converting just 42% of his break point chances with an inspired Fognini next:

“I had a lot of chances, but it’s normal you’re going to suffer against some of the best in the world, need to keep improving. Tomorrow is another day, into the second week and I hope to be ready for Monday.

Fognini came into this after an injury so will be hungry to play well, I saw on the screen that he had a very impressive win against de Minaur in straight-sets, let’s see. I need to keep improving, it’ll be a tough one, hope it can happen.”