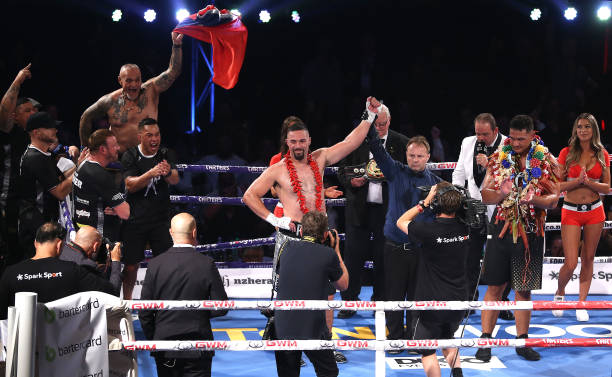 Making his first appearance since a fifth-round TKO win over America’s Shawndell Winters this weekend twelve months ago, Parker did his stock no favours with a one-dimensional display against Fa – who he had fought four times during their amateur careers, with the H2H split at 2-2.

Fa, who entered this clash with a 19-0 record, hadn’t fought since retaining his WBO Oriental interim HW title in Nov. 2019 but you wouldn’t have known from Parker’s typical sluggish start. 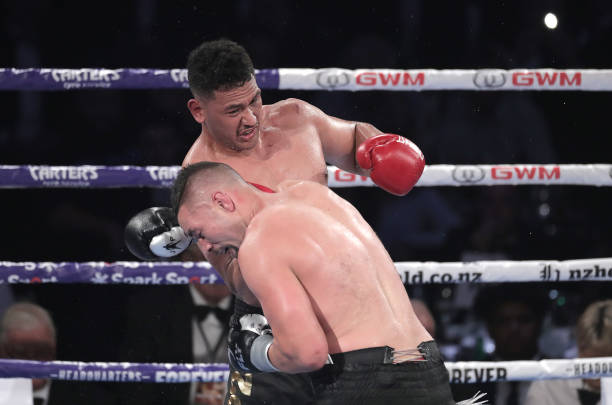 After all, this was billed as Fa’s big opportunity to showcase the skills that had finally presented him a chance against one of the world’s best in his division.

Despite some promising moments, his insistence on clinchwork ultimately hurt him on the judges’ scorecards in a fight many weren’t expecting to be as competitive as it ultimately proved.

Fa weighed 20lb more with a significantly longer reach than Parker, whose movement was slow and relatively predictable throughout. There were moments in R1 where Parker found himself in trouble: wobbled with a looping left hook to the head as Fa’s jab was already landing early on.

Parker made a concerted effort to target the body, though his head movement was too slow and saw him get caught on the way out while struggling to establish striking range with consistency.

However, he was active enough to perhaps edge rounds three through five, embracing his role as the aggressor with frequent dirty boxing in the clinch.

Parker landed a big right hand as Fa instinctively tried to tie him up near the ropes, responding with a combo on the back foot and an uppercut when they began brawling in the pocket.

The main issue here was the referee’s lack of assertiveness – as he continually broke them up but refused to warn either for excessive holding, so there was a messy undertone to their exchanges.

Fa clearly won R6, which began with a furious combination as he landed more punches when they exited yet another clinch, imposing his physical presence and visibly wearing on Parker.

He threw big right-hands, but Parker responded in R7 by returning to load up on the body work that earned sustained success earlier.

You couldn’t help but feel Parker’s unwillingness to box on the inside was hurting his chances, though Fa’s punch output levels weren’t exactly high enough to threaten him too much.

The same was true for R8, though Fa was more effective in R9 besides a ten-second burst to finish by Parker – which saw the 32-year-old caught with an elbow opening up a nasty cut.

Fa’s clinch work, frustrating to watch, had clearly worked to slow Parker down – though the aforementioned cut above his left eye gave the impression that this bout was more one-sided. 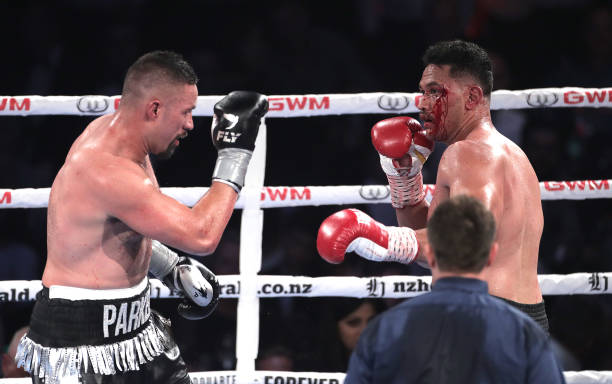 Parker drew blood with a nasty cut to finish R9 – an elbow into Fa’s face, close to his left eye

Parker’s inability to adapt to the situation and successfully utilise a plan B attack was worrying, especially in the final three rounds as Fa landed more big shots while the WBO’s number three ranked heavyweight was winding up to throw a knockout shot that ultimately never came.

Fa began the finale on top, landing more punishment with a clubbing right in the clinch and uppercuts to boot. If anything summed up this fight, it was their contrasting body language immediately after the final bell. Fa had his hands aloft, Parker looked defeated and regretful. 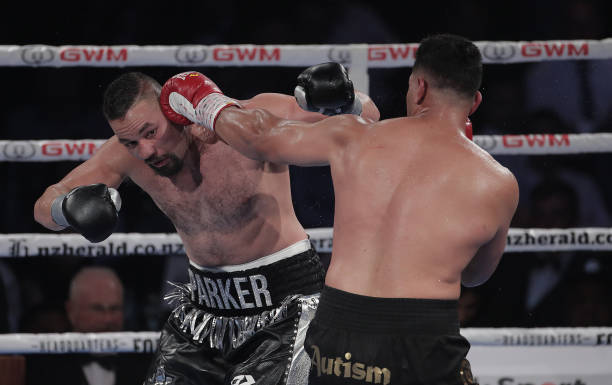 With an amped up crowd in attendance who spent plenty of money for this, the judges’ scorecards are part of the reason why this fight was forgettable. There were some close rounds.

But 119-109 and 117-111 scorecards in Parker’s favour? Even by just discounting Fa’s clinchwork, those numbers don’t make sense. A split decision, or actual closer scores would’ve been better received and justifiable, even if Fa was respectfully content in his post-fight interview afterwards.

“I loved it, thanks to everyone for turning up. He taught me a lesson in producing more volume but I felt fine in there, clipped him a few times, it’s an honour to be in there with a world-ranked heavyweight.”

Parker knows he’ll have to step up his game against elite competition, who he just hasn’t fought since successive defeats to Anthony Joshua and his UK compatriot Dillian Whyte. He said:

“Thanks for the support, a tough night. Junior Fa and his team came to fight, it was a lot closer than expected, with my team we’ll see who is next for us.

He put on a great performance, there’s a lot to go back and work on, shows the ring rust.”

Regardless of the way he won, a bout against Dereck Chisora was already lined up at some stage this summer – with the winner of Usyk-Joyce potentially in the pipeline for Parker too.

Since losing to Whyte, he has wins over Alexander Flores, Alex Leapai and the aforementioned Winters – all three are low-risk, mediocre heavyweight fighters masking his relative inactivity.

Chisora (32-10) is a name that helped sell over a million PPV buys for his UD defeat by Usyk last October, so perhaps represents the sort of acid test Parker needs to justify true intrigue again.

However, true heavyweight title contenders will be encouraged after watching this display. The age-old saying is you’re only as good as your last fight and he didn’t show enough – especially with his movement and ability to tactically adjust – to claim he would beat Usyk or the top brass.