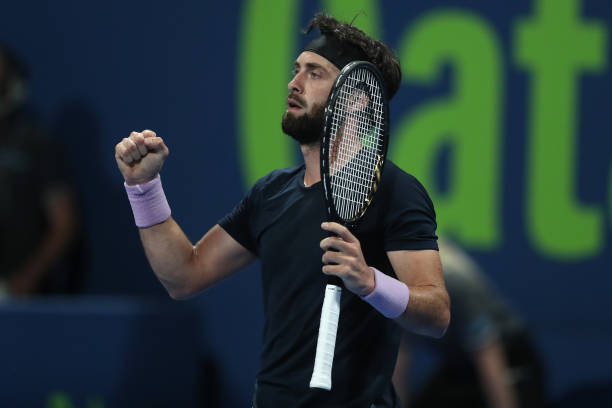 Having come back from a set down to win for the second time this week, Georgia’s Nikoloz Basilashvili described his three-set triumph (3-6, 6-1, 7-5) over a fatigued Roger Federer as unbelievable – saving a match point against the tournament’s second seed in Doha. Up next is Taylor Fritz, who similarly recovered to beat world no. 11 Denis Shapovalov earlier on. 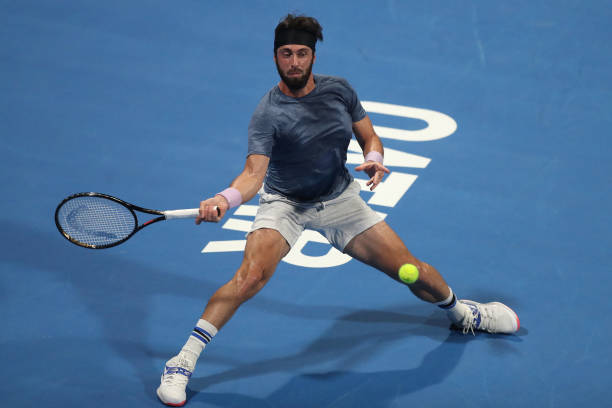 Having beaten Australia’s John Millman (2-6, 6-4, 6-2) and Tunisian wildcard Malek Jaziri (6-2, 6-2) to reach the quarter-finals of this year’s Qatar Open tournament, the 29-year-old embraced his role as resident killjoy: knocking a returning Roger Federer out after saving a match point.

“It’s unbelievable, he’s one of the greatest of all-time in tennis – just to play him means so much to me, I’m very happy he’s come back playing again, to win against him is a dream come true for me.

He was always my idol, I’m sure the same [can be said] for many tennis players and fans, an unbelievable player so I’m extremely happy.”

Despite some perilous moments, Federer saved three break points to go 4-3 up with a gritty hold, before the pair wasted no time exchanging quick service holds immediately afterwards.

Suddenly, Basilashvili served to stay in the match and despite going 30-0 up, he lost three straight points to give Roger a match point. Unlike Dan Evans yesterday, he held his nerve.

A forehand winner, sandwiched between two forced errors in rallies, saw the score levelled at 5-5. He dropped just one point in the next game after starting it with a defiant return ace.

Despite fumbling two match point opportunities after successive unforced errors, the Georgian sealed a hard-earned victory with the third: wrongfooting the Swiss with a crosscourt winner.

Up next is America’s Taylor Fritz in the semi-finals tomorrow after recovery from a set down to beat world no. 11 Denis Shapovalov 5-7, 6-3, 7-5 in just over two hours much earlier in the day.

Friday’s clash is only their second H2H meeting and Nikoloz was admittedly unaware of that fact during his courtside interview – Fritz beat him 6-3, 3-6, 6-1 in Chengdu, back in September 2017.

“It will be a very good match, have to take a rest and get ready for tomorrow, means a lot for sure to be in the semi-finals.”

Rather than focus on a drastic performance drop-off – to be expected – Federer revealed his happiness with how he stayed the course in successive three-set matches post-match.

Federer moved as slow as ever in this set.

Very awkward to watch, but not totally surprising.

As quoted by Yahoo, the 39-year-old said:

“I’m actually happy that I was able to play back-to-back three-set matches against top players, that’s an important step forward to me.

I’m still building up, so this is a stepping stone. I’m actually happy how I felt today on court overall. I think I was able to play how I wanted to, so that’s always a great sign and feeling to have.”

Although there were encouraging signs and some tougher moments, only time will tell whether Federer can remain physically fit and play at a high-quality standard when Grand Slams arrive. 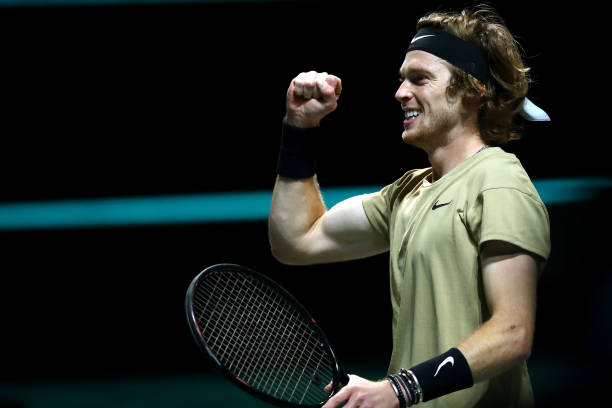 Rublev beat Fucsovics last week, had a first-round bye and hasn’t played in Doha yet after two W/Os

It’s the first time in the 31-year history of the ATP Tour that a player has reached the semi-finals without hitting a ball, having received his second successive walkover.