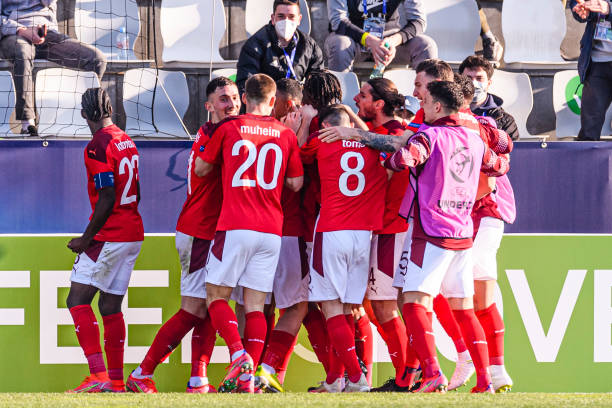 Centred around staunch defending, Switzerland’s under-21s ultimately got what they deserved through a timely Dan Ndoye looping winner: clean sheet and all three points to sting a lax England in their opening Group D fixture at this year’s European Championships in Slovenia. 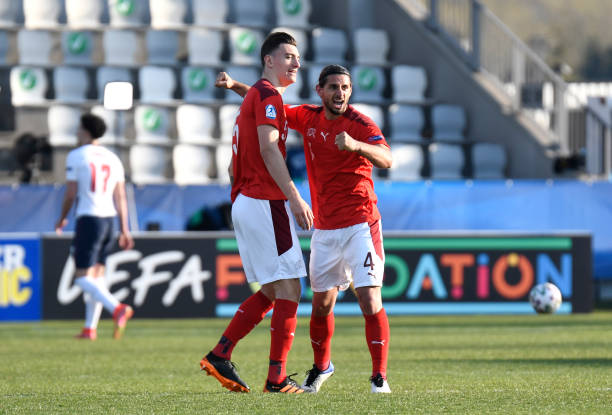 Bamert (no.4) and Zesiger celebrate at the full-time whistle after a hard-earned opening group win

As expected with their 3-4-3 formation, Aidy Boothroyd’s men had plenty of possession but struggled to do much of note with it throughout.

It was a comfortable save for Sheffield United goalkeeper Aaron Ramsdale, who has endured some struggles at club level in the Premier League this term but did well despite failing to keep a clean sheet here – which should stand him in good stead for the rest of the group stage. 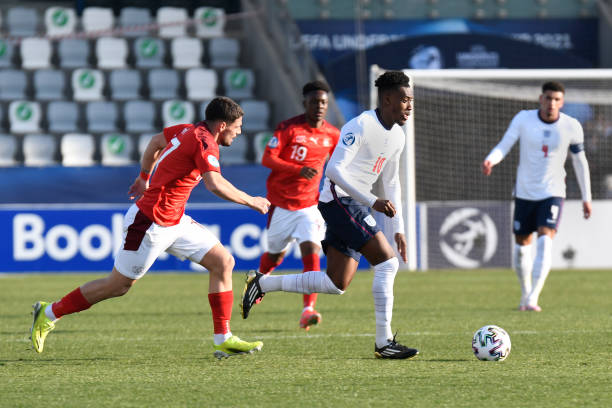 It was the latter’s cushioned lay-off that allowed Hudson-Odoi freedom to skip past two challenges before ultimately skewing his effort wide.

Nice winger Dan Ndoye forced a low stop from Ramsdale, before he had to frantically scramble towards his far post after Miro Muheim – former Chelsea academy player – fed Zeqiri, who headed goalwards but couldn’t atone for his earlier miss.

Lloyd Kelly headed wide from a corner as England’s threat from set-pieces was clear, but the Swiss’ defensive stance had proved too tough to crack.

There were no changes by either side at half-time, though Switzerland rattled the post four minutes after the restart. Toma came close as England’s telegraphed attempt to play out from defence were being exposed again, this time with Tom Davies relinquishing possession cheaply.

Jan Bamert committed a necessary cynical foul to stop Arsenal’s Edward Nketiah on the edge of the area, with Racioppi producing a diving stop to thwart Hudson-Odoi’s resulting free-kick.

Servette playmaker Kastriot Imeri, who came on at the same time, forced Ramsdale into a tricky stop from distance – knocking the ball away from Ndoye, who lurked dangerously to his left.

Little did he know that ten minutes later, the pair would combine to break the deadlock.

Sheffield United’s Rhian Brewster replaced captain Nketiah while Hoffenheim loanee Ryan Sessegnon made a cameo as Boothroyd’s attack-minded changes continued, though the basics were glossed over in the build-up to Ndoye’s shanked finish.

Jones was outmuscled by Toni Domgjoni, an overlapping Muheim flew down the flank and Imeri instinctively flicked the ball into Ndoye’s path.

Oliver Skipp – already booked – and Eze, were caught ball-watching as the 20-year-old struck goalwards while falling, seeing his effort loop beyond Ramsdale’s best efforts into the far corner. 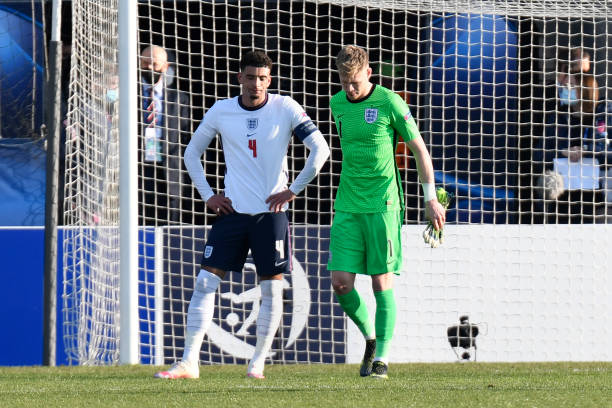 England were heavily favoured ahead of this matchup and understandably so, considering the star-studded squad they possess – multiple players are established Premier League regulars (and beyond) for their respective sides, while others who featured during the qualifiers were too.

However, this was also a Switzerland team finishing on 27 points in their qualification group last November – missing top spot on goal difference (+4) to a star-studded France side, many critics’ pick to go all the way in this tournament considering the depth at Sylvain Ripoll’s disposal.

For all the experience they hold over this group, they did the basics right: pressing as a collective unit, swarming the flanks when necessary, making Hudson-Odoi beat three or four players before having a half-chance and keeping Arsenal’s breakout star Emile Smith-Rowe quiet.

Nketiah had to largely feed off scraps, Burnley winger Dwight McNeil’s delivery was inconsistent while Norwich fullback Max Aarons was visibly struggling to do much better on the other side.

Ultimately, the jump in quality of opposition England face from qualifiers to tournaments is clear but doesn’t only apply to them, the age-old question about Boothroyd’s suitability to get the best out of these players has returned again after falling desperately short two summers ago.

England Under-21s have now won three of their last 18 matches at the European Championship. Shambolic given the resources.

The day’s other U21 Euro group stage games are as follows (BST time):